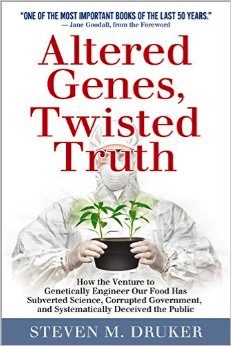 Today may hold particular significance in human history if the author of a new book on the facts about genetically modified (GM) foods is right.   At a press conference in London that I attended this morning, US lawyer Steven Druker argued that “contrary to the assertions of its proponents, the massive enterprise to reconfigure the genetic core of the world’s food supply is not based on sound science but on the systematic subversion of science and it would collapse if subjected to an open airing of the facts.” 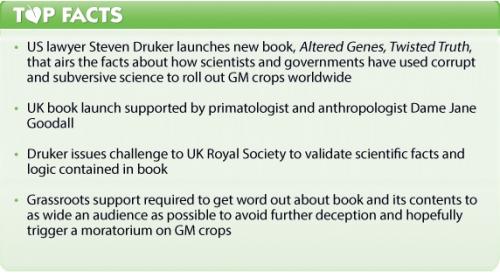 Could Druker’s book accelerate the tipping point. He hopes that the likes of Obama and Cameron read it and banish GM accordingly. I’m not altogether convinced it will be that simple, given it is well known that the personal views of most world leaders are at odds with their public ones. But I am very hopeful that Druker’s book might act as a catalyst. 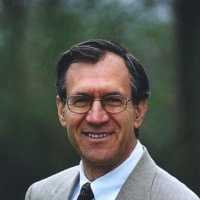 Given I received a copy of the book just a few hours ago, I have yet had a chance to do more than dip into particular parts of the 511-page tome. What I’ve seen so far impresses me. But I am impressed much more by the feedback from those I trust including Prof Joe Cummins (Canada) and Claire Robinson of GM Watch who have been close to the manuscript through its years of development.

Druker is no newcomer to the GM controversy.  He was the key force behind the 1996 lawsuit (Alliance for Bio-Integrity v Shalala) against the US Food and Drug Administration (FDA) after the agency agreed to inflict GM foods on an unsuspecting American public.  Unfortunately, the case was dismissed largely on the grounds of technicalities. Druker has played a shrewd card; his book is now out and cannot be retracted. Opponents of his views will have two choices; content its findings or ignore it. Historically, the latter may have been the most common way the establishment has dealt with challenges for which it has a limited capacity to defend its position, but it is up to those of us with deep concerns about the long-term effects of GMOs that this doesn’t happen.

Systematic corruption and subversion of science

During the press conference, Druker named and shamed the US National Academy of Sciences, the American Association for the Advancement of Science, the Food and Drug Administration and the UK’s Royal Society as being complicit in the fraud, now helped along by a host of highly powerful academics, politicians and opinion leaders. The tactic has been to confuse the public, says Druker, and erroneously convince people, politicians included, that the scientific foundations for creating GM staples for the world food supply was sound.

Not only has Druker used his razor-sharp legal mind to come to grips with the available science, he’s also been able to crystallise its many weaknesses and show how it can be used subversively to make the case for GM foods. Even more importantly in my opinion, Druker shows how the science is both corrupt and fraudulent. In other walks of life, such corruption and fraudulence is usually condemned and rejected by society, so it will be interesting to see how public and political opinion might be able to be swayed by Druker’s over 10-year investigation.

Supporting Druker at the press conference was Jane Goodall PhD, internationally renowned for her work over many decades with chimpanzees, and more recently with children through Roots to Shoots.  In her short presentation, fresh from her arrival back in London from Tanzania at dawn, she spoke of her deep concern for the release of GM crops worldwide, their potential effects on the environment and the difficulty of detecting such effects after the event.

This point was also stressed by Druker in relation to humans and the complete absence of epidemiological evidence.  He condemned the scientific integrity of those scientists (i.e. most of the pro-GM scientific camp) who claim the lack of apparent effect of GM release on the US and Canadian population who have now been exposed for over 20 years is ample evidence of no effect. Of course, not only would the effects be drowned out by chronic and other diseases, Druker also commented that using the same approach for a common conventional food would render it impossible to detect even if it was later shown to contribute to an 80% elevation of cancer risk.

Druker also issued today a challenge to the Royal Society. He is asking the  Royal Society, which was seminal in destroying the credibility of Dr Arpad Pusztai in the eyes of governments and regulators, along with swathes of the less-informed public.  Dr Puzstai was of course the Rowett Institute scientist that carried out one of the most in-depth animal studies ever conducted on risks of GM potatoes expressing a lectin from snowdrops, culminating in the publication of partial results in a paper in the Lancet journal in 1999. In an editorial in the same journal shortly after, the Lancet referred to the Royal Society’s actions as “a gesture of breathtaking impertinence”, given the supposedly learned reviewers had only evaluated incomplete lab results, not the full results or methodology used for the complete experiments. Druker believes the Royal Society now has a chance to put the record straight on the science. It has until April 20th to comment or disprove any of the facts in his book.

The book the Royal Society should not be allowed to ignore

Given the book chronicles the events, among others, that were used at the time the legal framework for GMOs were laid down in the US, Druker’s review and analysis comes at a critical time for Europeans. Pat Thomas of Beyond GM, who facilitated the UK press launch, said, “Under pressure from new legislation and the ongoing TTIP negotiations, the UK and the rest of Europe is on the precipice of making sweeping changes to their historical stance on GMOs.”

Ms Thomas added, “Steven Druker’s investigation into the history of fraud and deceipt that ushered in the era of GMOs deserves serious consideration before we take actions that will irreversibly alter the European food supply.”

Society should not accept the premise that GM foods are safe. There has never been a basis for such a view. Never before have humans, plants, animals and other life forms on planet earth been subjected to such an untested and irresponsible experiment that exists largely to benefit a miniscule fraction of the world’s population financially.

For the sake of future generations and all other life forms on our delicate planet about which we still only have limited understanding, nothing short of a moratorium on GM foods should be our goal. Let us hope that Steven Druker’s new book might act as a catalyst for such change.