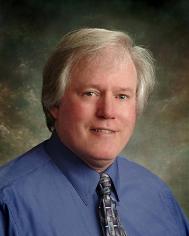 Put the words ‘bioenergetics’, ‘energy medicine’ and ‘quantum’ in the same sentence and you’d usually have many practitioners running for cover lest they be tarred with the skeptics’ ‘quack’ brush. But when that sentence is preceded with the words ‘James Oschman PhD’ the effect is often the reverse. Professor Oschman is a serious academic with degrees in Biophysics and Biology and a publication list as long as your arm. His groundbreaking series of articles on “healing energy” have provided the source material for two books. Two books that offer a theoretical basis for exploring the physiology and biophysics of energy medicine to satisfy even the most skeptical of his academic peers.

Despite it being a bank holiday weekend, the turnout was good and the practitioners who attended Saturday’s CAM Conferences’ ‘Energy beyond ATP’ day weren’t disappointed. Dr Oschman was an enthralling and worthy headliner.  He was very ably supported by Dr Damien Downing, President of the British Society for Ecological Medicine (BSEM), himself an expert on environmental injury/illness and ecological medicine. Harry Massey completed the line up with a passionate account of his remarkable healing that took him from bedridden to healed through bioenergetics medicine. The CAM Conferences are held in association with the British Association for Applied Nutrition and Nutritional therapy (BANT), both of which ANH-Intl supports and has a close working relationship. 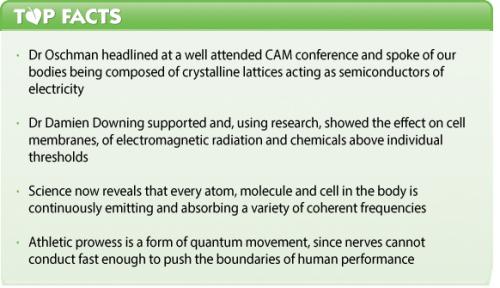 Dr Damien Downing set the scene perfectly for Dr Oschman. His presentation joined the dots between chemical sensitivity and electro-hypersensitivity. He used a raft of research to demonstrate what happens at the cellular membrane level when we are exposed to chemicals or electromagnetic radiation (EMR) above our own individual thresholds – the accent being firmly on the word ‘individual’.

In our modern era, the average person is carrying a complex mixture of different synthetic chemicals in their bodies. Many of these did not exist before the industrial era. They are novel and completely new to our biochemistry. The bottom line is that we – science – have no way of characterising the toxic risk of this mixture. But we do know that the highest doses received early in life cause the most damage. It is when the body is at it’s most vulnerable. Pulling out a USB stick from his pocket, Dr Downing illustrated that even the most innocuous looking objects can hold risk. Apparently a USB stick one of the most toxic things a baby could put into its mouth as the connectors in it are made from beryllium.

Mobile phones and microwave exposure risks differ from chemicals in that their danger is relative to the distance the device is from your body. With this kind of energy toxicity the further away you are isn’t necessarily the safest with the lowest effect. Dr Downing’s key point that hit home hard was that despite the ubiquitous use of mobile phones and devices, this kind of microwave radiation has a very direct physiological and biochemical effect right down at the most fundamental levels of our body.

Our cell membranes are the tiny, semi-permeable barriers that surround every cell. They are the gatekeepers for everything going into and out of the cell. Without them our cells would be a blancmange of cytoplasm with no structure and no ability to function. However, for many, the finer details about cell membranes have long been relegated to the realms of school biology. Dr Downing elucidated Prof Martin Pall’s research into the non-thermal damage by microwave electromagnetic fields. Pall found that this type of radiation produces health effects by activating the voltage-gated calcium channels (VGCC) in the cell membranes.

These channels are driven by electric nerve impulses that trigger a series of actions that open the channel and allow calcium into the cell at very specific times. Under normal healthy conditions there should be 12,000 times more outside the cell than inside it. However, when the VGCC open, calcium floods into the cell where it then carries out a range of effects e.g. activating neurons, hormone release, ATP production, cell division, apoptosis (cell death), sperm motility, fertility etc. They also play a key role in maintaining normal blood pressure.

Pall’s groundbreaking research has identified that EMR causes the VGCC to flood open triggering cellular reactions at times when they are not required and causing damage as a result. Hence, the heightening risk as exposure intensifies, coupled with the fact that no one knows where the individual thresholds lie before a person descends into disease.

Taking biochemistry quantum from the off, Dr Oschman jumped right in the deep end revealing that our bodies are actually a mass of crystalline lattices, much like you see in the earth crystals. More than that, some crystal structures, such as the protein crystals of collagen, are also semiconductors, which harked back to another of Dr Downing’s presentation points that much of our bodies are run by electricity.

Dr Oschman’s presentation took delegates on a tour of his research, his personal history and spiced it all with a healthy dose of anecdotes of his time with pioneer quantum physicist, Dr Albert Szent-Gyorgyi. Szent-Gyorgyi’s own personal journey into the quantum field of research began when he saw his cat jump back from a snake. He knew in that instant that there was no way physiology and biology could stimulate such a ‘quantum’ reaction throughout the cat’s entire body in that nanosecond of time. There had to be another trigger and so began his exploration.

Dr Oschman’s feeling is that the ‘space’ in the centre of an atom is actually a photon conducting space. Incredibly, science can now confirm that every atom and every molecule and every cell in the body is continuously emitting and absorbing a variety of coherent frequencies. These exchanges of coherent frequencies enable every atom and every molecule and every cell to know what every other part of the body is doing. When this synergy is working in balance, you become radiant and everyone can see it. It’s systemic cooperation in motion and the only result is health and vitality. Disease and disorder arise when the channels are blocked or disordered for some reason.

Delegates sat spellbound as Dr Oschman talked about why one touch affects the entire body and how our eyes defy biology and take in light in the same spirals as light is found in the universe. One of the major causes of aging is free radical damage to DNA. But if you’re grounded and barefoot on the earth, electrons from the living matrix prevent the free radicals from attacking. He mapped the subconscious and explained that intuition is a direct communication from the living matrix, which is conducting impulses hundreds of thousands of times faster than any neurological connection could be made. In this way, much of the athletic prowess we admire is actually a form of quantum movement, given that nerves just can’t conduct fast enough to push the boundaries of human performance.

His take home message: that most of the problems in the body are because the regulatory systems aren’t working properly. The conventional and accepted model of biology and medicine is fine – but it’s wrong!  Why? Because biochemistry alone is a comparatively slow process, diffusion is random and feedback is just not quick enough. A biological system just can’t run like that.  It’s too hit and miss.  According to Jim Oschman, “Light orchestrates information in the body”. 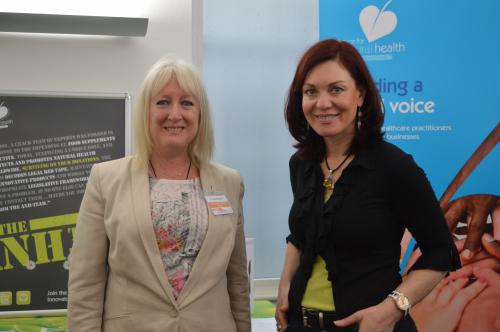 ANH-Intl will be at the new CAM Summit June event for practitioners:

New, from the organisers of the CAM Conference series, the practitioner-only CAM Summit launch event will take place on 20th June 2015, at 155 Bishopsgate, London. It will feature Dr Tom O’Bryan, speaking about breakthrough approaches to address gluten exposure and sensitivities, Dr Alex Vasquez speaking on optimisation and protection of mitochondrial function, Robin Puglia, speaking on the autoimmune mechanism, environmental triggers and barrier permeability, and Gillian Crowther speaking on mitochondrial information transfer: implications for health and disease.