Rob Verkerk deliberates this latest approval with the China Daily and wonders if it&rsquo;s akin to bashing a square peg in a round hole&hellip; 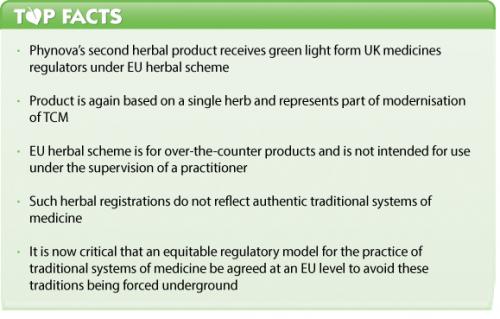 This is the second successful registration that Phynova has received. In March, Phynova was given the thumbs up for approval of its Joint and Muscle Relief tablets under the traditional herbal registration (THR) scheme.

The one thing both successful applications have in common is that they are for single herb formulations. And how has Phynova got so far using a system that even the European Commission indicated back in 2008 was “not appropriate” for the practice of traditional systems of medicine such as TCM, Ayurveda or anthroposophic medicine?

Phynova is a rather unique operation. With its HQ in Oxford, headed by Robert Miller, it operates using an unusual business model. It has a subsidiary in China and around half its staff are Chinese. Since its formation 10 years ago, it’s been looking at the best candidates from TCM’s 10,000-strong range of natural substances used in the TCM pharmacopoeia to register as drugs under the EU’s Traditional Herbal Medicinal Products Directive (THMPD). The THR scheme has so far posed a major barrier to products from non-European traditional systems of medicine.

But by sticking to individual herbs and expecting some bending of the original intent of the THMPD, it seems Phynova can get its way. When we talk about bending the intent, we’re referring to the fact that the MHRA seems quite happy to accept products that are not traditional. Phynova’s Isatis product, for example, is being delivered as a lemon-flavoured powder in a sachet; and it aims to compete directly with Reckitt Benckiser’s Lemsip and products of its ilk.

This is not the first time this has happened. The rules also appear to have been bent to allow Padma Circosan to be registered under the THR scheme. The herbal composition for the Padma Circosan product differs from the Padma 28 that has had 30 years use, including at least 15 years in the EU. Technically, therefore, the new formula should be non-compliant with the THR scheme.

Phynova has also beat Big Pharma at the game. This is an area the world’s second largest drug company, GSK, has wanted to exploit. But GSK’s progress was interrupted by the uncovering last year of a bribery and corruption scandal linked to its operations in China; the company was promptly fined the equivalent of nearly £300 million by Chinese authorities.

In my interview with the China Daily’s European Weekly edition (26 June – 2 July 2015), I was quoted saying:


more widely available to the EU market….However, this new application for Isatis is for a single herb, like its predecessor the Sigesbeckia-based product for joint and muscle relief. Single herb products are by and large considerably easier and cheaper to register and are not the typical multi-component formulas associated with TCM

Our view is that modernisation is fine on the basis that it does not replace long-standing traditions. As the European Commission agreed as early as 2008 in its experience report of the first 4 years of the EU registration scheme for traditional medicines, it is “not appropriate” for products of these holistic traditions.

A major limitation of the THR scheme for traditional medicines is that it cuts out the practitioner, and in these holistic traditions, the practitioner will typically tailor his or her recommendation of a specific formula to an individual. One ailment may, for example, have over 5 possible remedies, but one will be chosen as being most appropriate according to the patient assessment and examination.

So while seeking approval of TCM products under the THMPD scheme may result in wider public access to Chinese herbs – critically – this will only occur without any erosion of the authentic tradition, which typically centres on the individualisation of approach through the therapeutic relationship between practitioner and patient.

The European Commission still hasn’t moved forward on this issue, despite the ANH and European Benefyt Foundation proposing a new model that could form the basis of regulation. We will continue to push this issue in the European Parliament hoping for a breakthrough in time, as the deficiencies in the existing regime become ever more apparent.

In the meantime, the practice of traditional systems of medicine, in most European member states, remains largely an underground practice, one in which practitioners potentially face serious charges if they become exposed to regulators. The UK is the only EU member state where an exemption continues to exist (under Article 3(6) of the Human Medicines Regulations 2012), allowing herbalists to prescribe unregistered herbal medicinal products made up within the clinic following one-to-one consultations.

We wish Phynova the very best in its endeavours getting more products related to the TCM tradition registered under the THR scheme. But it may be akin to bashing a square peg into a round hole. We’re unconvinced that Phynova’s proposed pipeline of registrations will go very far towards delivering the fruits of thousands of years of practice of TCM to the European public.

It is essential that an equitable framework for the practice of traditional systems of medicine is found. And that’s something that ANH and the European Benefyt Foundation will continue to apply pressure on.