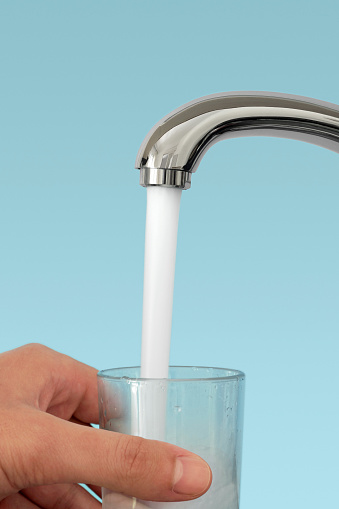 A newly released Cochrane review concludes that there is little or no high quality evidence suggesting that water fluoridation reduces tooth decay in children. This general view loosely supports our own view, that of the Fluoride Action Network, National Pure Water Association and numerous other organisations and individuals who have long opposed fluoridation of the drinking water supply.

Professor Anne-Marie Glenny, from the School of Dentistry at the University of Manchester, headed the review.

The stand-out findings of the review are as follows:

Tooth decay is a big issue for children and adults alike. However, the Cochrane review confirms that the decisions made in the 25 countries around the world (including the UK, Ireland, USA and Australia) to mass fluoridate the drinking water supply, have been made on science that is biased, confounded by other factors and no longer relevant because of the introduction of other fluoride sources. Contrary to what many have been led to believe, there is no scientific evidence of any reasonable quality that supports the use of drinking water fluoridation to decrease rates of tooth decay in adults, the life stage in which we spend on average around 80% of our lives.

With no conclusive evidence of benefit, a definite and predictable risk is incurred (dental fluorosis), the risk being dose dependent. As is so often the case, the authors of the Cochrane review play down this risk, considering it simply a cosmetic effect. However, since fluorosis is caused by the demineralisation of both teeth and bones, its effects on bone health cannot be ignored even when dental fluorosis levels are low to moderate. The authors do acknowledge the role of high exposure to fluoride being related to skeletal fluorosis and there are inadequate high quality studies available to establish the effects of combined exposures from drinking water and other fluoride sources applied topically. 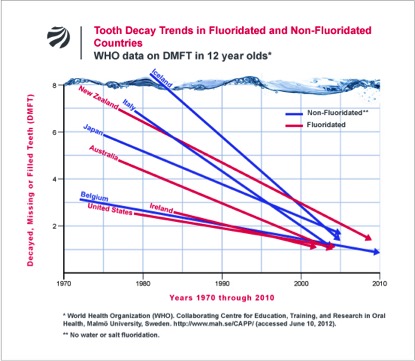 Tooth decay rates according to the World Health Organization have been falling in both fluoridated and non-fluoridated countries (Source: Fluoride Action Network [http://fluoridealert.org/articles/50-reasons/])

Given that the prime effects of fluoride when consumed in drinking water occur topically during the time the fluoridated water is in the mouth — and not from its systemic effects on the body — one cannot separate fluoride as used in drinking water from additional exposures in oral care products. Yet governments are consistently reliant on irrelevant (and biased) data originating from before the mid-1970s when fluoride toothpastes and mouthwashes were introduced.

Also, from a risk perspective, total exposure from all sources should be considered. Apart from the ample evidence of risk of dental fluorosis, there is additional evidence for potentially increased risk of bone fractures and cancer. These and other health effects caused by mass fluoridation are often regarded as inconclusive because the available studies are subject to biases or confounding.

In the UK, about 15% of the public drinking water supply is currently fluoridated, affecting some 6 million people. The Councils in Hull and Bedford are presently contemplating fluoridation of their municipal water.

The Cochrane review provides clear evidence for an absence of proven benefit and likely risk, therefore it should be a significant tool to help sway municipalities against fluoridation.

In Ireland, over 70% of the water is fluoridated and the North South Survey of Children’s Oral Health in Ireland (2002) reveals that one in 3 Irish children are affected by dental fluorosis.

In the majority of Western Europe, mass fluoridation has not been sanctioned – or where it was initially introduced, it has been stopped. The risks are deemed to outweigh benefits and alternate approaches to reducing tooth decay with lower systemic exposure (e.g. good oral health, reduced sugar consumption, fluoridated toothpastes and mouthwashes) are considered both more effective and less risky.

Mass fluoridation of drinking water supplies should therefore be banned globally because:

Please forward this article to any contacts you have in fluoridated areas. Please make elected representatives aware of the Cochrane Collaboration review and help them to understand why mass fluoridation of drinking water serves no public health benefit and should be stopped as a matter of urgency.