Muteness on B vitamins and lifestyle after pharma’s Alzheimer flop

After Eli Lilly’s Alzheimer’s disease Phase 3 trial failure, should we be looking at dealing with the causes and not the effects of the disease?

Announcement of the failure of Eli Lily’s Alzheimer’s disease drug solanezumab in a late-stage trial last week sent the share prices of the drug company which gave the world mass-produced insulin, penicillin and the Salk polio vaccine crashing. Millions suffering early stages of Alzheimer’s disease — along with their families — have had their hopes dashed. Such was the bullishness with which Eli Lilly was already promoting its new drug; the company’s marketeers had managed, before the drug’s release, to carve out a view in the minds of many that this was going to be the world’s first effective drug treatment for the disease. The company appears to have no option but to drop further work to have the monoclonal antibody drug licensed for treatment of mild dementia due to Alzheimer’s disease.

In the wake of these revelations, it’s both astonishing, yet entirely predictable given historical precedents, that both the media and health authorities are remaining mute on the only known effective treatment for early-stage Alzheimer’s. The goal is to perpetuate the myth that there are no effective treatments available. The reason for this muteness is that the only known treatment, that could reduce the Alzheimer’s disease burden by around one half, doesn’t involve a drug at all, at least in the ordinary meaning of the term. Instead, it involves high doses of cheap, unpatented B vitamins that despite an extraordinary history of safety, are being targeted as unlicensed drugs in countries like Germany, France, Sweden and Denmark. That’s because they work, have clear pharmacological effects and fall foul of the EU definition of a medicine.

The UK’s Office for National Statistics reports that dementia and Alzheimer’s disease have replaced ischaemic heart diseases as the leading cause of death in England and Wales, accounting for 11.6% of all deaths registered in 2015. The projected number of people expected to be suffering with Alzheimer’s by 2050 is 100 million worldwide.

Eli Lilly, which professes to have spent around $3 billion on Alzheimer’s drug trials over the last 30 years, is resigned to adding solanezumab to a long list of failed Alzheimer’s drugs. Lilly’s shares tumbled 12% to their lowest point in two years. Lilly’s setback raised questions in the strategy of targeting the beta amyloid protein cascade in the brain that is the primary symptom of Alzheimer’s disease responsible for cognitive decline. However, both Biogen, with its drug aducanumab, and Merck, with verubecestat, continue to research drugs targeting amyloid plaque.

Meanwhile, echoing the less than high success rate for cancer drugs, the charities are busy raising more money. But for what? Hoping to exploit the public’s seasonal generosity, Alzheimer’s Research UK has just released its “Santa Forgot” fundraising campaign. But is it possible that the research, funded by millions of concerned citizens, will amount to nothing because researchers are focusing on the wrong part of the problem?

Amyloid plaque begins accumulating in the brains of Alzheimer’s patients some 15 to 20 years before they ever show clinical symptoms of the disease, yet doctors are not trained to look or advise this early in the disease’s progression. You don’t wait for a heart attack to start a treatment plan! Doctors typically treat high blood pressure, and it’s now recognised that there is no better prevention strategy than a modified diet and lifestyle. The same applies to Alzheimer’s disease, which is another disease linked directly to chronic inflammation as well as chronic upregulation of the immune system. Interestingly, in Alzheimer’s disease, the immune system may well be acting, in evolutionary terms, at the expense of the brain.

Drug companies are no fans of vitamins or modified diets or lifestyles because, regardless of their effectiveness, there’s no money to be made. The prospect of a vaccine to avert or delay the onset of Alzheimer’s disease, on the other hand, would be a much more palatable option.

The link between homocysteine and Alzheimer’s

Let’s return to the elephant in the room – B vitamins. In 2013, we reported on how a simple blood test to measure homocysteine, coupled with an online cognitive test and high dose B vitamins for those with high homocysteine (over 10 micromoles per litre) could be used to slash Alzheimer’s disease rates by half.

Elevated plasma homocysteine levels, associated also with atherosclerosis and an increased risk of stroke, have been shown to increase the risk of dementia and alzheimer’s disease. One review concludes that: “Of seventy seven cross-sectional studies on more than 34,00 subjects and 33 prospective studies on more than 12,000 subjects have shown associations between cognitive deficit or dementia and homocysteine and/or B vitamins”.

A study by Professor David Smith at the University of Oxford provides clear evidence for the effectiveness of high dose B vitamins in those with raised homocysteine. The study showed that people with a homocysteine level above 9.5 micromoles per litre, when given B vitamins delivered as 20mg B6 (1429% of the NRV), 5000 mcg B12 (20,000% of the NRV) and 800mcg folic acid (400% of the NRV), had a significant reduction in the rate of brain shrinkage, when measured with an MRI scan. While many regard these dosages as high, they remain within the conservative Tolerable Upper Levels set by the European Food Safety Authority (EFSA) in 2006 – confirming they are side effect free.

While mainstream doctors don’t usually test for homocysteine, it’s a test that can readily be arranged through a nutritionist or private functional medicine or integrated health practitioner or doctor. 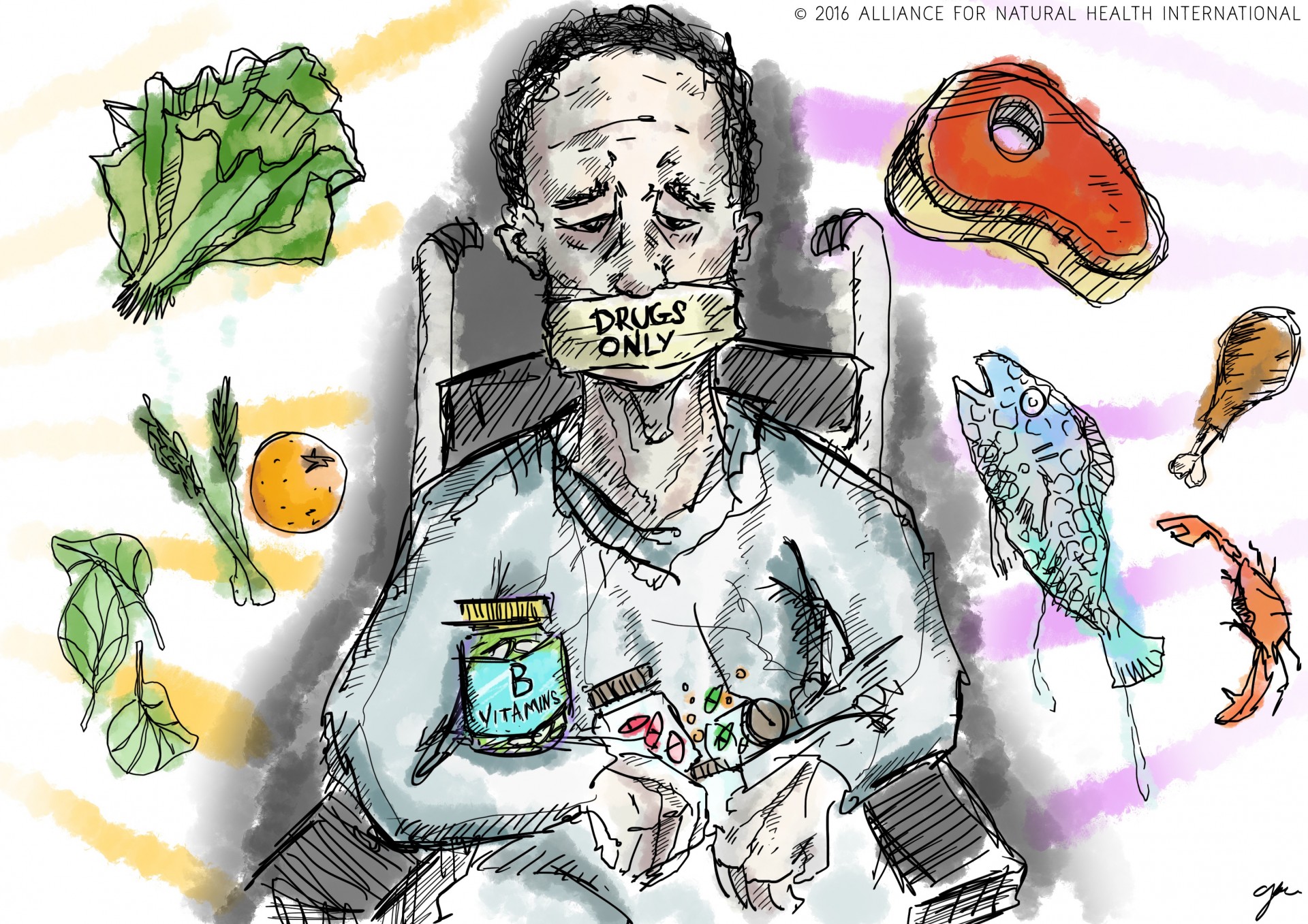 Can you eat your way to Alzheimer’s disease?

Studies have shown that sugar consumption can disrupt memory, and long term it can contribute to the shrinking of the hippocampus of the brain, which is a hallmark symptom of Alzheimer’s disease. It’s becoming clear that the same pathological process that leads to type 2 diabetes may also hold true for the brain. Seen from this perspective, the formation of beta-amyloid plaques is more of a healing response to injury from chronic inflammation and unchecked oxidative stress. It is therefore a symptom, rather than a cause, of Alzheimer’s disease.

Pulling 3 decades of research together, Dale Bredesen MD, a leading Alzheimer’s disease researcher from the David Geffen School of Medicine at UCLA, put together the MEND protocol, to which 9 out of 10 patients with early-stage Alzheimer’s responded positively in a trial published in the peer reviewed journal Aging in 2014.

The protocol has matured to a 36-step strategy and early trials at the Cleveland Clinic appear very promising. The protocol includes:

An arm of the Bredesen Protocol trial is now also being established in the UK.

The ketogenic diet to protect against neurodegeneration

Ketones are the brain’s preferred source of fuel and ketones are what your body produces when it converts fat (as opposed to glucose) into energy. A diet rich in fat, with very low carbohydrate intake, the classic ketogenic diet, has been cited as a potential treatment for a number of health conditions including Alzheimer’s disease, Parkinson’s disease, multiple sclerosis, cancer, drug resistant epilepsy and type 2 diabetes.

Alternatively, a less radical diet, such as one following the principles in ANH’s Food4Health guidelines, can still allow you to enter ‘nutritional ketosis’ for periods of a given day when combined with specific exercise/meal frequency patterns, that include regular, moderate to intense physical activity, some high-intensity interval training, intermittent fasting and some fasted training.

Look after your brain and avoid drugs

There is increasing recognition that complex diseases, like Alzheimer’s, require more complex, multi-therapeutic – rather than magic bullet, monotherapeutic – solutions.

The Bredensen Protocol is an example of a multi-therapeutic approach targeting Alzheimer’s disease.

The Food4Health guidelines along with its integrated 10 pointers is one of the best ways to ensure to keep your brain healthy in the long term.

Neurologist and functional medicine doctor, Dr David Perlmutter, explains in his book Grain Brain that Alzheimer’s disease is a disease predicated primarily on dietary and lifestyle choices. He fingers two culprits above any other: too much sugar and gluten/gliadin consumption from grains.

Dietary and lifestyle choices, many of which encompass elements of our Food4Health guidelines, that help you maintain a healthy brain include: