As the world population blows out to nearly 10 billion by 2050, we will face two entirely different challenges. In much of the developing world, getting enough food to avoid mass starvation will be among the biggest challenges. For the Western world, it’s not population growth or food supply that will be the overriding problem. It’s healthcare and social stability given that our societies will need to deal with very large numbers of old people burdened with very high rates of sickness.

That’s unless we do something about it. Interestingly, however diverse these two sets of challenges might seem, the solution to them might be remarkably similar as we show below.

The Bible, Nostradamus and, more recently, the United Nations (UN), have all warned of famines and shortages of food supply. But, is there a plan to guard against it? A 1972 book called Limits to Growth predicted that our civilisation would probably collapse some time this century, and recently Australian researchers have found this prediction to be ‘spookily’ on-track' (see scenario in Figure 1). 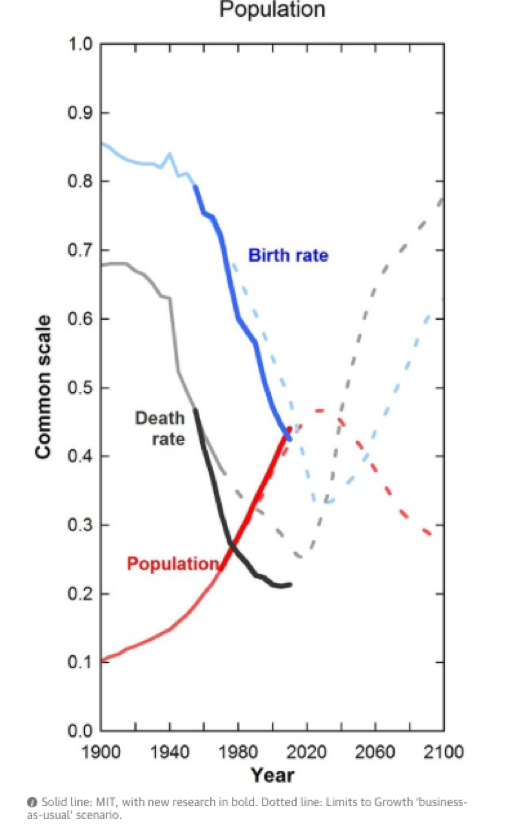 However, this rise in population is absolutely not being mirrored across Europe and North America (Figure 2). In Europe, rather contrastingly, it is shown that a third of the population will be aged 60 or above by 2050, giving us a wholly different problem that could collapse the healthcare systems of today and cause mass social destabilisation with all its consequent issues, many being almost unthinkable. 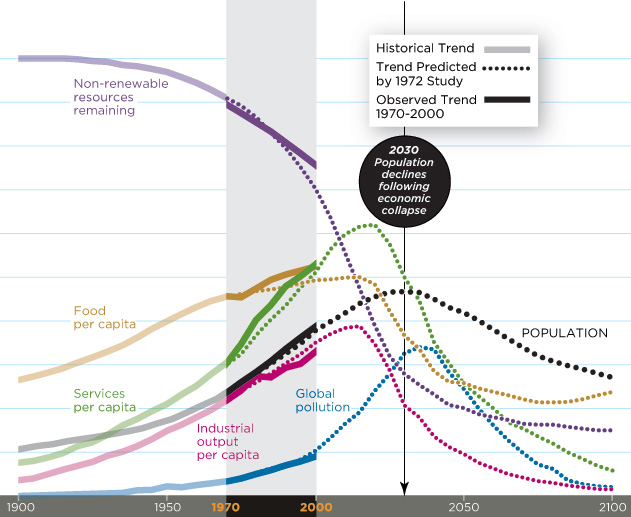 In the UK, when the National Health Service (NHS) was founded, nearly half of the population died before the age of 65. Hospitals were there for infectious diseases, but now the non-communicable disease pandemic threatens the sustainability of that health system.

Food, diets and nutritional status are important determinants of non-communicable diseases such as obesity, cardiovascular disease, type 2 diabetes and dementia. Governments are becoming increasingly aware of their obligation to ensure that agricultural and food policies are supportive of health policies. Are they empowering citizens to take the right steps early in life so they can enjoy a long life in good health?

In the UK, with pressure from over 2000 senior NHS doctors calling for increased spending on health and social care over “unacceptable levels of safety concerns”, it is clear to see that there is much-needed change in the way that Western systems handle and distribute healthcare to society.

It’s becoming increasingly apparent that throwing more money at the present system isn’t going to achieve very much, especially when the system is based on drugs that don’t cure the very diseases that represent the main health burdens!

Such dependency on repeat-prescription Big Pharma would be a thing of the past, handing the power of choice and knowledge of individualised healthcare, once again, back to the people where it has always belonged.

Sustainability and safety of our food supply and sustainable healthcare

Unsurprisingly, the European Commission (EC) is looking closely how it might face the challenges ahead, given its remit as the ‘executive’ power of the European Union (EU), including the management of a population of over half a billion people.

We’ve digested the EC’s most recent report, “Delivering on EU Food Safety and Nutrition in 2050 - Future challenges and policy preparedness”, on the subject and found it both alarming and refreshing. This progressive report was the inspiration of the Deputy Director-General responsible for food safety, DG SANTE, Ladislav Miko PhD, who like our own executive director, Robert Verkerk PhD is a qualified ecologist.

The EC considered four possible scenarios. Some of these scenarios include functional processed food, but with added pharmaceutical substances - “phoods”.

Most scarily, the worst case scenario represents the current track we’re on. The EC calls it the ‘Global Food’ scenario as it’s based on global food corporations controlling the world food supply. The outcome? Even higher chronic disease burdens — and this leads to an inevitable collapse of our current system of healthcare – and, along with it, the entire social and economic infrastructure.

The EC’s report was particularly refreshing in its recognition for the importance of agroecological food production systems, the approach long upheld by ANH-Intl as the only sustainable approach to human food supply. It also recognizes that diet and lifestyle are the major factors impacting the health of citizens.

Long lives are OK if people are productive and healthy. But they are a major problem if people aren’t. In the UK (and the rest of Europe), we desperately need a fundamental shift from a healthcare system that aims to be curative to one that is preventative.

Governments must move to implementing a risk-benefit approach in regulation to avoid unjustified, disproportionate bans on healthy foods and supplements, and use scientific and legally rational thinking to communicate the health benefits of foods by commercial operators. A complete revamp of the nutrition and health claim regime in the EU using a graded system, for example, could solve the position on botanical nutrients.

A sustainable society that’s not on the brink of crisis is one in which individuals in it are fully empowered with regard to their health. That doesn’t mean we don’t need doctors or health professionals. We absolutely need them, but we don’t need to be told there is only one way to manage our health — and that involves drugs or surgery. We also don’t need huge hospital waiting lists, iatrogenic (medical) errors and hugely over-stretched medical professionals that can no longer cope with health challenges that ultimately can be prevented. To take this pressure off the system we have to make dietary and lifestyle management the centre-piece of our health management system – and put its control back in the hands of the individual.

In essence, this is the sustainable healthcare scenario that’s central to ANH’s mission and vision of the future and is supported by ANH's Food4Health campaign and guidelines.

A community supported, self-empowered health system would allow people to take ownership of their health and would facilitate information sharing between all health professionals.

The future is in our hands – let’s make it happen. These concepts are the ones that are integral to all the advocacy work we’re doing to help shape a better future for us all. It’s the people’s choice.