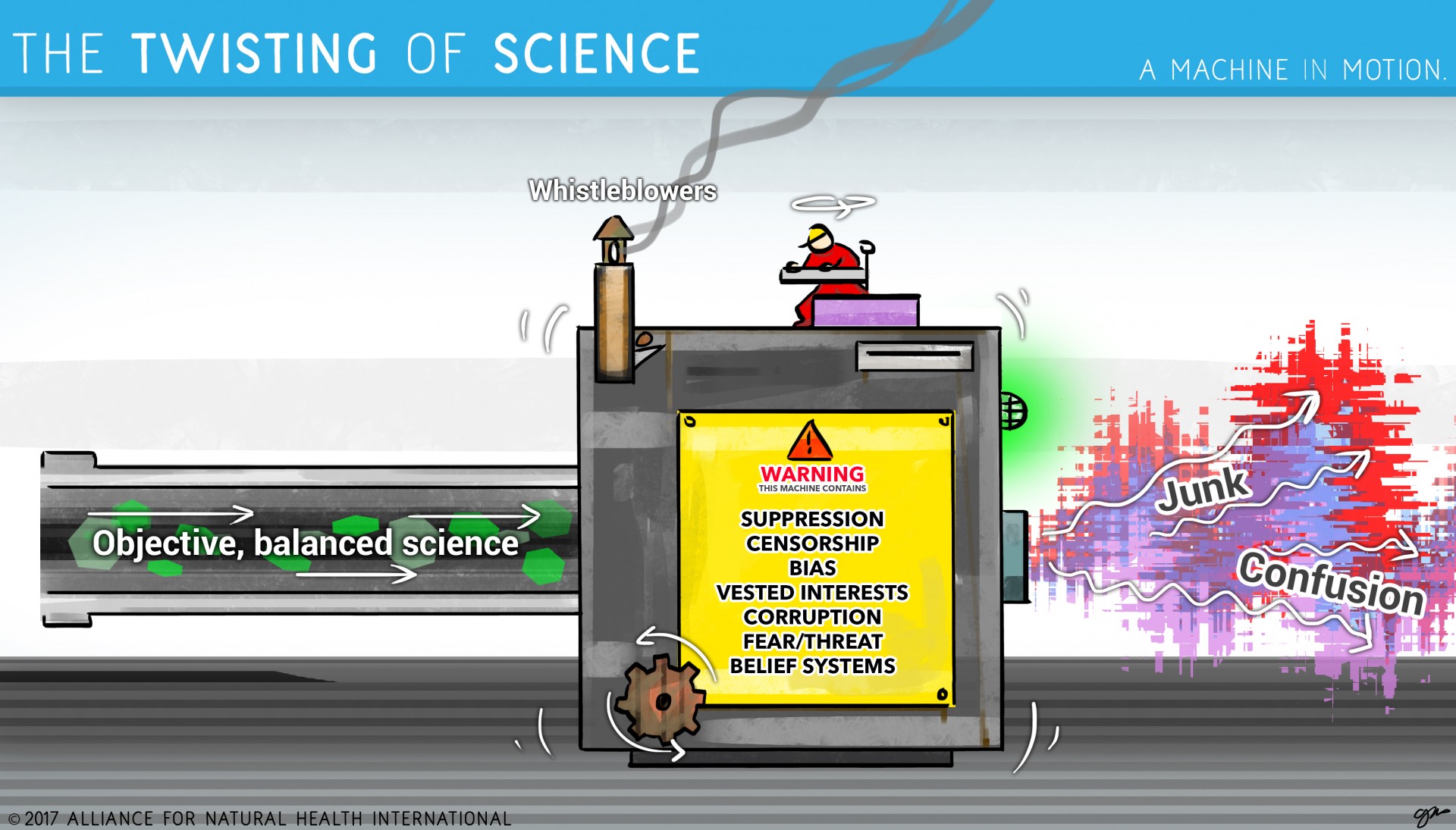 Twisted science and a misled public

A few days ago, Jerome Burne, the UK health and medical journalist, and I, found ourselves sitting around a table in Hemsley + Hemsley’s café in London. We were assembled with a few others to talk about how and why the kind of eating in which we were indulging was now facing a media attack, albeit under the new guise of ‘clean eating’. Our conversation inevitably strayed to the subject of Wakefield and Vaxxed given Jerome had also attended the London premier and my colleague and ANH-Intl executive coordinator, Meleni Aldridge, had just featured on the front page of The Times alongside Andrew Wakefield.

Our conclusion was less about there being a problem with science. Instead, it was more about there being a problem with the kind of science that was being used to make decisions about what the public should do to maintain health and resilience. It seems we’re meant to buy the line that eating junk and filling our kids with vaccines is the gold standard.

Back to the science, or pseudo-science, as referred to by both sides of any controversial debate. Cherry-picking of science is a very real problem, again, on both sides. And of course that’s not just linked to food and health. Take any issue we see today as contentious, be it faked moon landings, the climate change hoax, vaccination dangers or the suppression of alternative cancer treatments. More on that a bit later. People on both sides of all these debates have either cherry-picked evidence or used evidence that is selective and subject to considerable, sometimes even, disclosed bias.

In science, unlike in law, we don’t have courts, judges and juries to determine which cases or scientific reports are still relevant through their consideration elsewhere. We have the occasional retraction of a paper, as with Wakefield et al’s Lancet paper of 1998. We also have many papers that fail to make publication at all. But we need to understand that jettisoning already-published papers through retraction – or even blocking publication of papers – doesn’t always follow the edict of ‘good science’.

In Wakefield et al’s Lancet paper, the retraction was made entirely on the basis of the conclusions of the kangaroo court-like General Medical Council (GMC) ‘fitness to practise’ disciplinary panel – that followed the longest hearing in the GMC’s history. That was on 28 January 2010.

A few key elements of the GMC finding are often ignored, especially by the media. In the words of the GMC itself, “The Panel wish to make it clear that this case is not concerned with whether there is or might be any link between the MMR vaccination and autism.” Yet, the denigration and erasure of the medical licenses of Wakefield and Prof John Walker-Smith, the Lancet study’s senior author (who retired in October 2000), by the GMC following this investigation are often wrongly assumed to support a lack of evidence for any link.

Just 5 days later, the retraction in the Lancet was published (2 February 2010). 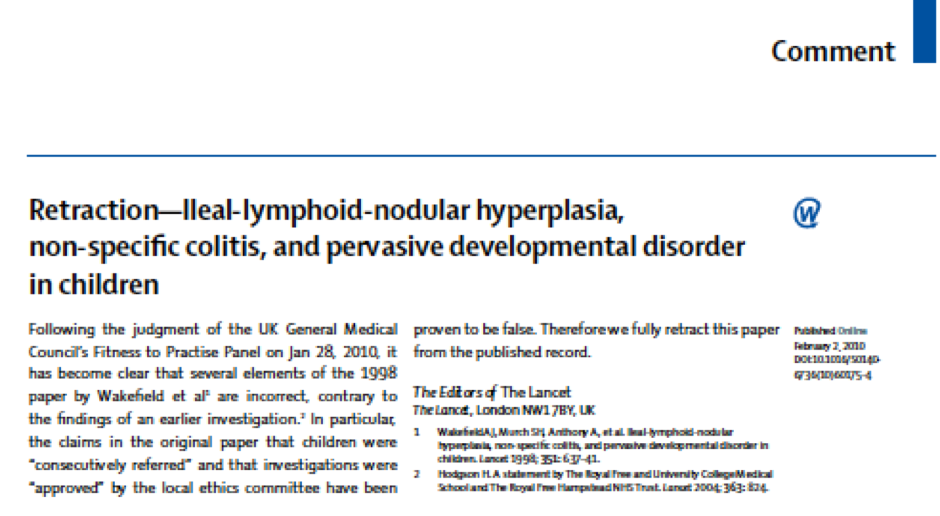 While a third author, Professor Simon Murch was let off the hook, both Prof Walker-Smith and Dr Wakefield, who had their licences revoked, decided to appeal against the decision of the GMC. In Prof Walker-Smith’s case, this decision was made a full decade after his retirement. Wakefield couldn’t sustain the appeal owing to lack of financial support, while Walker-Smith’s professional indemnity took his to the finish line and he was fully exonerated in 2012.

The Court referred to the GMC’s conclusions and findings against Walker-Smith as being “flawed”, in “error” and determined that “The panel’s determination cannot stand.” The judge ruled, “I therefore quash it……The end result is that the finding of serious professional misconduct and the sanction of erasure are both quashed.” There has obviously been considerable debate around the fact that if the GMC was shown to have errors in its processes, should the Lancet review its decision to retract Wakefield et al’s paper from 1998? Should the charges by the GMC against Wakefield be reviewed too, given Prof Walker-Smith’s exoneration by a real court given the exposure of failings in the GMC tribunal’s processes?

Smoke and mirrors and an intent to prevent any vindication of Wakefield has been the name of the game since 2004. For those interested in historic details, you could do a lot worse than to read John Stone’s account and references therein, Smoke and Mirrors: Dr Richard Horton and the Wakefield Affair, penned in 2008 for the Age of Autism.

The point is that science gets savagely twisted to fit with a given belief system. The GMC investigation of Wakefield, Walker-Smith and Murch had nothing at all to do with the MMR autism link. It was much more about finding ways to discredit these doctors. The focal point was fundamentally around the distinction between medical practice and research. If Wakefield and the other 12 doctors or scientists who co-authored the Lancet paper were found to be conducting research rather than engaging in clinical practice to benefit the children that were the subjects of the paper, was ethics approval gained? Here, the Court’s conclusion in Prof Walker-Smith’s appeal against the GMC that appears at the end of the 2012 judgment gives the clearest view of what went on. The score? 1 to Prof Walker-Smith, 0 to the GMC.

The effects of twisted science and unbalanced media

Most doctors and healthcare professionals, especially in the UK, but now around the world, have taken on board a version of events that is factually incorrect. They have assimilated other evidence, much of which has been linked to vaccine and pharma companies desperate to maintain public faith in vaccines, that suggests there is no link. As is so often the case, the architects of the ‘other evidence’, such as Paul Offit and Stanley Plotkin have conflicts of interest. Perversely, with reference to the Clinical Infectious Diseases paper above, Offit’s conflict is declared, while Plotkin’s isn’t. We don’t see anyone suggesting that the paper should be retracted though…

The parents of children who line up for their MMR vaccines are invariably told the vaccines – along with all others to which they are subjected – are safe. Typically, they are not told about the frequency or severity of potential adverse effects.

For example, in the case of the MMR vaccine, in the patient information leaflet, that is hardly ever shown to the parent or carer, very few parents are told that the frequency or risk of the majority of known adverse effects (13 out of 21) is simply “not known” (i.e. cannot be estimated from the available data).

How often is the current US HRSA data revealed to them? When the public is told vaccines are safe, do they assume no one has died or been injured? Would they be shocked to show, as revealed by the HRSA, that there have been 933 injuries and 59 deaths from the MMR vaccine?

In the name of starting the process of untwisting the manipulated science, let's stop governments claiming vaccines are safe. The only tenable position that can be held, using what we would regard as a balanced, scientific method, would be we either don't know, or they are not safe. The one thing that vaccines are not, is safe.

Please sign the petition now, if you haven't already - and please forward the link as widely as you can. Thank you.

The link to our change.org petition is as follows: http://bit.ly/2meSUL7

The promotional video for our petition is at: https://youtu.be/qPclF6Ff25Q