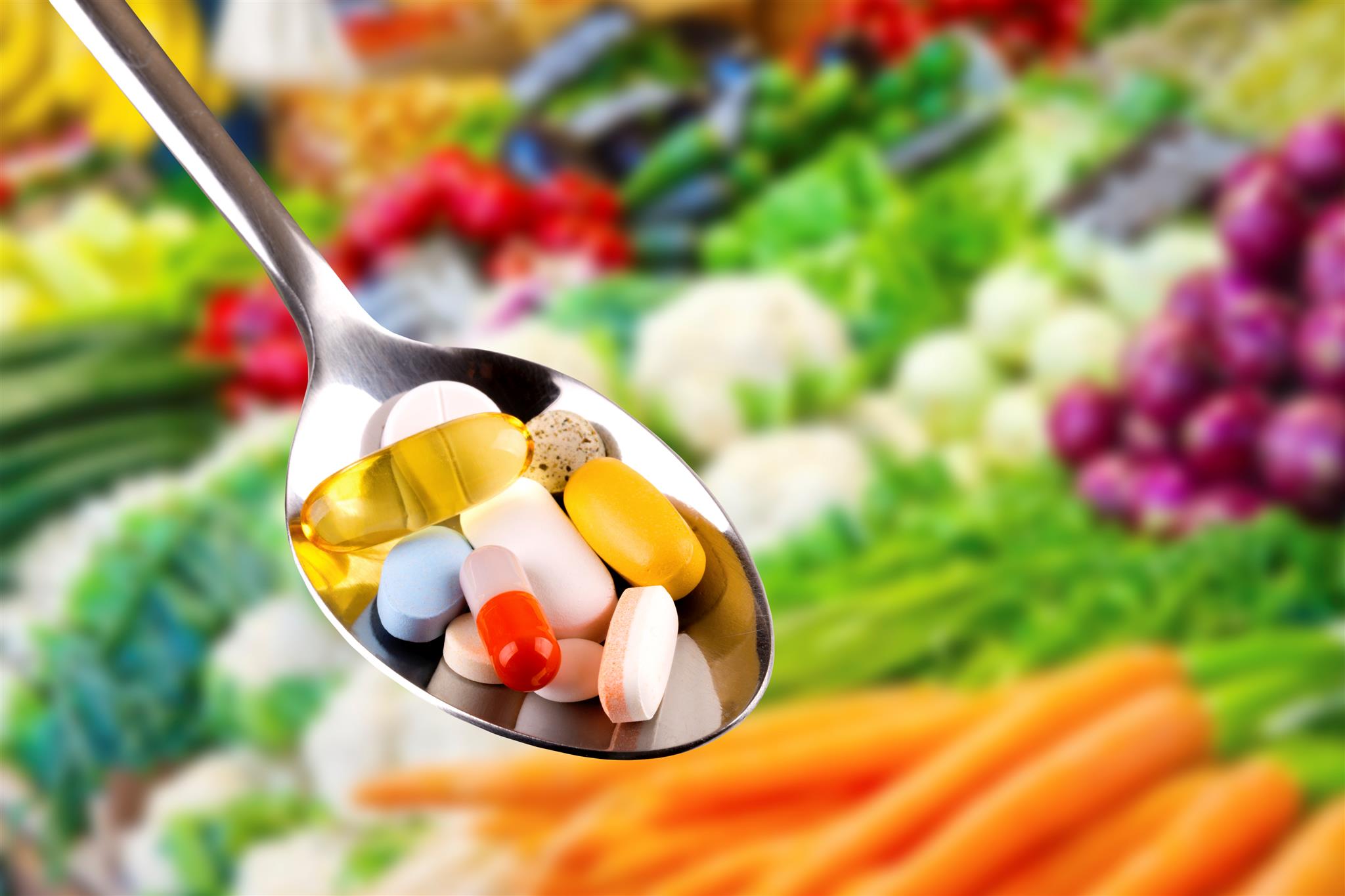 On 8 June this year, the Food Safety Authority of Ireland (FSAI) issued a 160-page report advocating “new upper limits for vitamins and minerals to safeguard health”.

ANH-Intl’s analysis of the report (summarised below) suggests that the new limits could threaten the public’s access to beneficial levels of some vitamins and minerals, notably niacin, vitamin B6, folate, vitamin B12, vitamin D and zinc. Such restrictions may violate fundamental rights and freedoms of the Irish people.

The FSAI, the Irish food regulator, says it will be working with the food supplement industry to establish guidance for the marketing of safe vitamin and mineral supplements in Ireland. However, ANH-Intl argues that imposing limits on maximum levels that are below the upper levels may be disproportionate. Among the reasons for this is that upper levels do not adequately take into account differences between risk/benefit profile of different forms (e.g. pyridoxine and pyridoxamine, vitamin B6; folic acid and reduced 5’-methyltetrahydrofolate, folate). Nor do they account sufficiently for differences in response or requirement between individuals.

Why has the Irish regulator issued upper levels for vitamins and minerals?

The EU Food Supplements Directive (2002/46/EC) has always intended to implement EU-wide, HARMonised limits on minimum and maximum levels of vitamins and minerals used in food supplements (Article 5). However, the European Commission, after years of deliberation on the subject with EU Member State authorities, stakeholders, NGOs and the European Parliament, has decided for the time being to not proceed with issuing harmonised levels. This has led to something of a Wild West, with some Member States issuing, or at least planning to issue, their own maximum levels.

In the publication of this 2018 report, the Irish authority has taken the first step in making clear it will use a standard risk assessment approach that can then lead to regulatory enforcement. In no uncertain terms, the FSAI indicates its intention to remove from the Irish market any food supplements it deems as unsafe.

What is a Tolerable Upper Level or TUL?

The FSAI report specifies tolerable upper intake levels (TULs) for 21 of the 30 vitamins and minerals permitted in food supplements in Ireland. These are defined as “the highest level of long-term daily intake of a nutrient, from all sources, judged to be unlikely to pose a risk of adverse health effects to humans.”

The levels proposed in the FSAI report coincide approximately or exactly with those of the European Food Safety Authority (EFSA) set in 2006 or the US Institute of Medicine (IoM) for the majority of vitamins and minerals, and differ for a few (see Table 1 below). These differences are claimed to be intended to account for the specific needs and “safety” of the Irish population.

It should be noted that TULs are determined on the basis of the nutrient form viewed as triggering the most sensitive adverse effect among the most susceptible group of individuals. They do not take into account the needs of those who have above-average requirements as they ignore any consideration of benefit.

It is something of an irony that EFSA’s 2006 report was presided on by Prof Albert Flynn of University College, Cork in Ireland, who was the then chair of EFSA’s Panel on Nutrition, Novel Foods and Food Allergens (NDA) (up until 2012). Prof Flynn, as it happens, is also chair of the Scientific Committee of the FSAI that has issued the 2018 report.

FSAI indicates in its report that the food supplement industry should apply a “standard risk assessment approach for evaluating the safety of vitamins and minerals in food supplements in Ireland. This is on the basis that the daily amount of a micronutrient from a food supplement, added to the usual daily intake from food sources, i.e. from foods, including fortified foods, but excluding supplements, in the highest consumers, i.e. the 95th percentile, should not exceed the tolerable upper intake levels (UL) for the population group(s) for whom the food supplement is intended.”

We have therefore calculated ‘theoretical’ maximum permitted levels or MPLs using this approach. Quite simply, we subtracted the amounts consumed by the highest Irish consumers (i.e. the 95th percentile) from the FSAI’s TUL. If the resulting figure was negative, we made it zero. We have also taken into account prescription only medicines (POM) legislation mentioned in the FSAI report (SI No. 540/2003) which specifies dosages at which certain vitamins become medicinal. Where these levels are lower than those determined with the above calculation, we have had to use the maximum daily dose above which the dosage would be deemed as medicinal.

For the sake of simplicity, we have only performed calculations for adults, excluding pregnant or lactating women.

A major problem linked to a health authority limiting access to higher dose nutrients in supplements relates to the negative impacts on those who have higher than average needs. Such restrictions can limit an individual’s ability to stay healthy or restore their health.

If the restriction of public choice is without adequate scientific basis, the restriction may be considered a violation of fundamental rights and freedoms, such as under Article 8 of the European Convention on Human Rights. It is our view that if a vitamin or mineral form that is permitted for sale in Ireland is present in a food supplement at a dose in which that nutrient form cannot be regarded as unsafe, any restriction of its sale on the part of the national authority should be illegal. Obviously, it would be a European Court, probably the European Court of Justice rather than the European Court of Human Rights, that would be required to make such a judgment.

In this regard, we have determined that if the Irish government was to proceed with its proposed approach, restrictions on 5 vitamins and one mineral may be illegal. These are:

The determinations on which these conclusions are based are summarised in Table 2.

We have then compared these levels with various estimates of optimal intake. We have used four different sources: 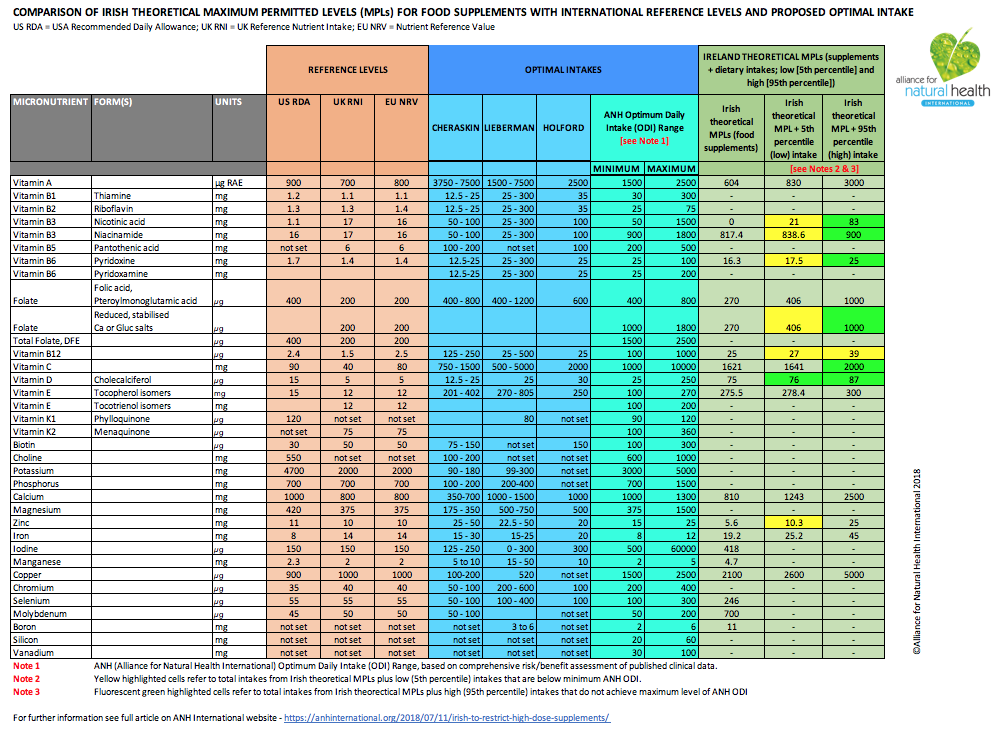 We’re in the process of taking these and related issues up with the Irish health trade. In our view this trade is the unsung hero in the healthcare equation in Ireland. Often vilified for selling supplements that are claimed as harmful or ineffective based on a misrepresentation of the science. Yet offering a gamut of healthy foods, herbal teas, botanicals and a host of other ingredients that help keep so many people, who understand their value, healthy.

It beggars belief that Professor Albert Flynn and colleagues will hand this distorted and over-simplistic view of micronutrient safety to enforcers in the FSAI. These enforcers, unaware of the implications of their brief, will then go on to limit public access to food supplements that have decades of demonstrated safe sale on the Irish market.

Should disproportionate enforcement commence, we are convinced it will not be accepted by the Irish people lying down. And we will be standing firmly at the side of those wishing to defend higher dose supplements that can be shown to be safe.

Alongside their safety, these supplements also help large numbers in Ireland to maintain their health. Many consider that spending money on natural health products is preferable to paying the typical €50 fee per visit to a general practitioner (GP).