Home News Have we lost control to the State?

Our species and societies have arrived at a crossroad – one that we’ve reached much more quickly courtesy of the new virus that has come to dominate so many of our lives.

Our new covid zone, that is updated on a weekly basis, provides you with an area on our website that you can scan regularly for relevant information — especially, but not exclusively, of a scientific or medical nature.

What we haven’t considered until now is how the unfolding Covid-19 pandemic is causing a seismic and very rapid change to our locus of control. This is a concept developed originally in psychology that talks to the extent to which we feel we have control over our lives. New bills are being developed and proposed by governments and elected representatives around the world to help deal with the new circumstances. Their intention is to provide a legislative structure that not only supports, but often also helps to enforce, changes to our lives that governments believe are necessary, based on the scientific advice they’ve received. The end game of these bills seems to be primarily to stop acute care facilities in hospitals being overrun by slowing transmission rates in communities. It’s less about actually stopping people dying. The public is being conditioned to believe this won’t happen until one or more approved drugs or vaccines are available.

These bills have so far had little pushback. There are probably several reasons for this. One, is that what is front and centre in the minds of so many, is our safety and health – and a common desire to prevent as many people becoming seriously ill or dying from Covid-19. There’s also the fact that communications are being removed from websites and social media sites if they’re critical or at odds with government policies. This has been particularly apparent when posts have suggested lockdowns aren’t necessary and natural immune enhancement combined with more testing (of virus presence and antibodies post-infection) might have sufficed.

The almost overnight arrival or unlocking of emergency government powers creates a sudden transition in our ability to self-determine our health journey. One in which many feel they have no option but to follow government policy. Non-compliance can put you at risk of being detained or prosecuted. The rationale is of course not hard to appreciate given the seriousness of the disease that can result in a small proportion of people infected.

What’s harder to understand is that these changes were rolled out so quickly amidst considerable scientific uncertainty about the virus and how it behaves when it interacts with our species, but also around the containment and mitigation strategies with which we’re now engaged.

While we know it’s not quite Russian roulette, we still have relatively little understanding how and why SARS-CoV-2 affects different people so differently, how many people have been infected (including those with very mild or no symptoms), or how long antibodies triggered by infection will remain effective against re-infection. We also have never had experience of a full blown global response like this so we don’t know how different societies can tolerate or comply with lockdowns, what the indirect impacts of social distancing strategies will be to different groups of people, or what the indirect consequences will be of diverting so much of the global healthcare resource to a single infectious disease.

These and many aspects of our interactions with the virus are under continuous and ongoing study. More data are emerging every day but because academic peer-review has been shelved given the crisis, quality of studies isn’t always high. One of the world’s most prominent scientists and doctors, Stanford University’s John Ioannidis gives examples of fake news in the mainstream media, withdrawn papers being used as the basis of fact, and exaggerated pandemic estimates, case rate fatalities and community spread data. He’s gone on to not only suggest that lockdown policies are not evidence-based, but that there has been insufficient effort to consider the collateral damage to society and even health as a result of the myopic focus on Covid-19.

He wasn’t only referring to China. He goes on to say:

“Recognizing that the public is more willing to accept government power grabs in times of crisis, some leaders see the coronavirus as an opportunity not only to censor criticism but also to undermine checks and balances on their power. Much as the “war on terrorism” was used to justify certain long-lasting restrictions on civil liberties, so the fight against the coronavirus threatens longer-term damage to democratic rule.”

Recommendations and guidance are one thing. Laws are another. Legal changes are being made in many countries and the crisis means that normal democratic vigilance has in many cases been put on the backburner. Interestingly, most countries already have legal provisions that can be used in the event that a national emergency has been declared.

For example, the US Congress is thought to have around a hundred laws that are unlocked once the President declares a state of emergency, as did Donald Trump on Friday 13 March.

A search of the independent US website GovTrack.us using ‘coronavirus’ as a keyword revealed 99 bills currently under consideration in Congress.

Some relevant bills or laws that have been, or are the process of being, enacted in other parts of the world include:

The 348-page Coronavirus Act 2020, that revokes the Health Protection (Coronavirus) Regulations 2020, was passed in the UK Parliament in just 4 days. Most of the detail is contained in the 29 schedules to the Act. Not all provisions apply equally in the different regions (England, Wales, Scotland and Northern Ireland).

Its key features include:

The Health (preservation and Protection and other Emergency Measures in the Public Interest) Act 2020, with many similar provisions, has been enacted in law in Ireland.

The declared state of emergency has unlocked emergency powers in many other countries including Italy, Spain, Hungary, Australia, Thailand, and the Philippines.

What this means to us

Many people appear to accept the need for our current circumstances. However, with the censorship on free expression on the subject, it could equally be argued that the majority do not have available to them all the facts on which to draw balanced and informed views.

This is why we have seen fit to provide you with links to some of the emergency powers and new legislation that has been enacted so that you are in a better position to make up your own mind.

What is sure, however, is that while the state of the emergency exists, society has passed the baton to our authorities in terms of our locus of our control. Not only for our health, but also in relation to our employment, our freedom of movement, and the education of our children. In so-called democratic free countries, all of these rights and privileges have been hard won over centuries.

It is surely of utmost importance to all of us that one new disease, that has ostensibly so far killed less than 100,000 people (= less than 7% of annual deaths from tuberculosis), creates such radical changes to our fundamental freedoms in under two months?

We have attempted to describe this transition in a diagram (below). It tries to show schematically the shift in our locus of control since the Covid-19 phenomenon emerged in January. 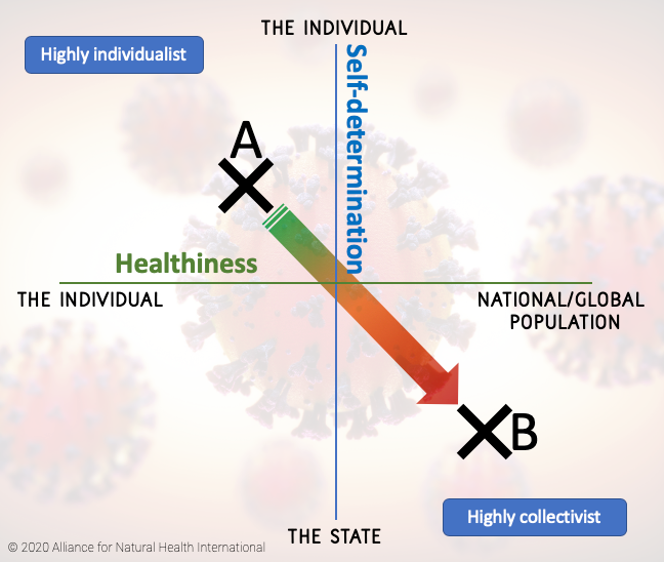 The shifting locus of control. Where point A represents a pre-Covid scenario in which healthiness among populations is considered best achieved by allowing individuals in society to self-determine their healthcare choices within partially regulated free market economies. Point B represents a hypothetical post-Covid scenario where it has been determined that the State should be primarily responsible for determining how citizens achieve high health status.

Everything is changing at such a rapid rate, one week seems a long time in our Covid-afflicted new world.

I won’t therefore waste either your or my time trying to speculate what might happen in the future. And let us not disregard the fact that the enforced global pause may provide citizens, businesses, political leaders and others with a rare opportunity to proactively and positively rethink how we interact with both people and planet.

But I do think we need to be eyes wide open. Very wide open. This pandemic opens a unique opportunity for the collection of data on our DNA and our movements. We can be detained on a whim. It has the ability to decimate lives through the global economic recession that is now guaranteed. In countries with democratically elected governments, we have accepted a transfer of powers from the individual to the State with barely a look-in.

Time to smell that coffee, green tea or whatever other plant-based pick-up you might fancy. But, please, let’s stay alert. There is just too much at stake. 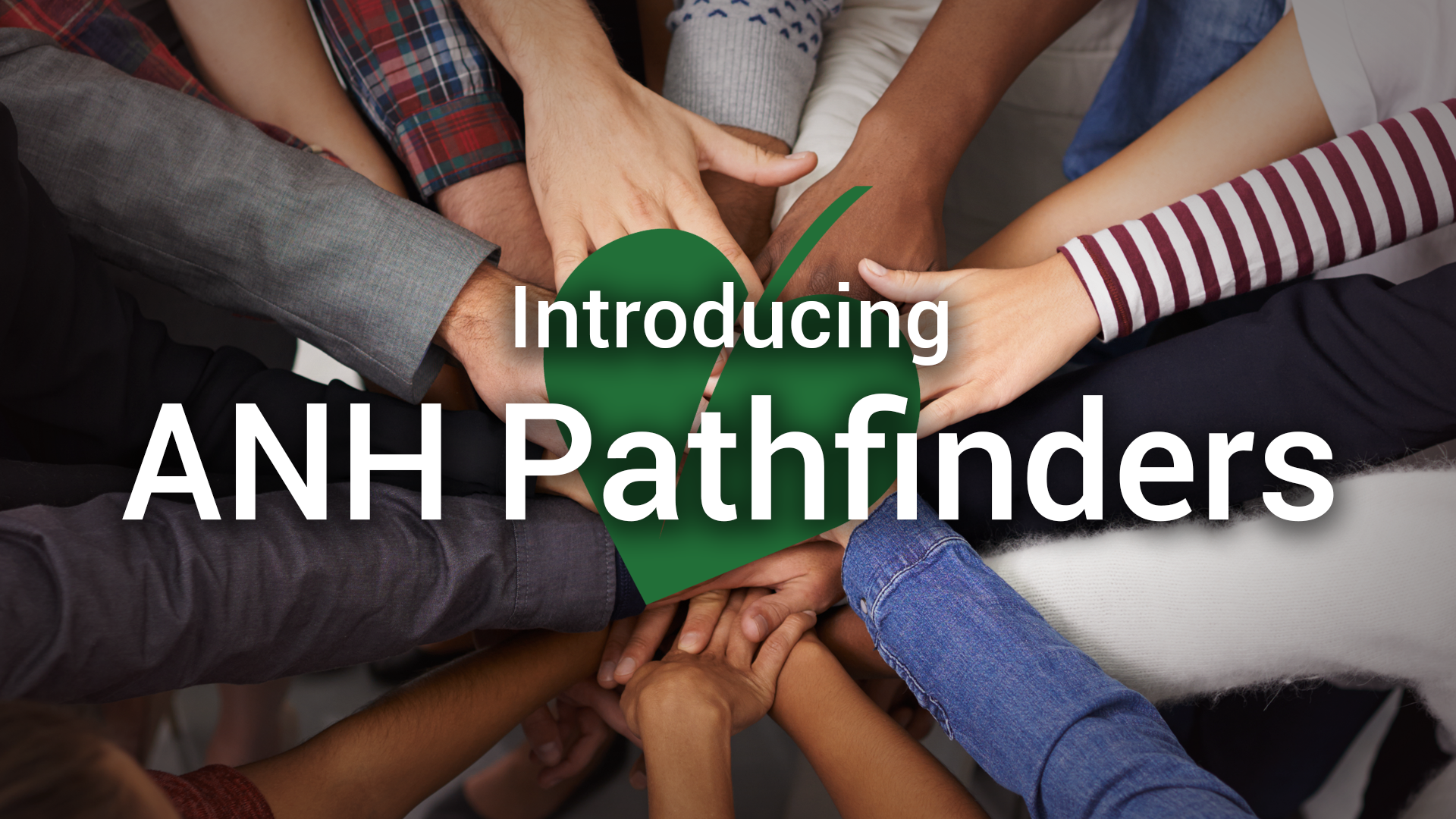 Rob and Meleni give you a sneak preview for what's coming down the ANH pipeline over the next couple of months. We're excited and hope you will be too!

ANH Founder Rob Verkerk PhD answers some of your questions