I won’t ever forget the way in which one of the world’s most influential nutritional epidemiologist’s responded to a question from the audience at Swiss Re’s 2018 summit at its Centre for Global Dialogue just outside Zürich, Switzerland.

Amanda Atkins, a filmmaker, is passionate about telling the story and that of thousands like her who have reversed diabetes via a very low carb diet. She challenged Prof Dariush Mozzafarian, a cardiologist and epidemiologist from Tufts University in Boston who has a major influence on government healthy eating guidelines around the world. Mozaffarian had already given a lecture suggesting that low carb is irrelevant as it only looks at one of the three macronutrients, and ultimately quality is much more important than focusing on macronutrient proportions.

Amanda’s challenge went something like this: I might be n = 1, so I know my case won’t influence your thinking. But I’m talking to thousands of others who’ve had the same experience and completely reversed their type 2 diabetes without drugs and now have HbA1c levels that are in the normal range – all with nothing other than a low carb/high fat diet. Mozaffarian was unmoved and simply dismissed her – to the horror of most of the audience, most being clinicians who had witnessed the benefits of low carb diets in their patients many times over. Mozaffarian’s stubbornness was borne out of a blind reverence to published clinical epidemiological studies. Bottom line, there were none of high quality in his view that evaluated what we might think of as healthy low carb diets. Mozaffarian was also aware that some of the world’s longest lived populations, such as the ‘Blue Zoners’ from the Sardinian mountains or Okinawa in Japan consume relatively large quantities of carbs, while the Inuits who eat high fat diets die young. These were the very kind of controversies that Swiss Re, one of the world’s largest re-insurance companies, aided by an impartial medical journal, the BMJ, wanted to get under the skin of.

So – how far have things moved on in two years.  This year’s summit did not allow us to enjoy from Swiss Re’s Centre for Global Dialogue the breath-taking views of Lake Zürich and the Alps. The conference was now virtual, courtesy of Covid, and ran for two days, each day with 3, punchy one-hour segments.

I bring you here some feedback on Day 1 that I was able to attend, but you’ll find below also videos of the Day 2 sessions. Day 1 kicked off with a wrap-up of lessons learned from the 2018 Food for Thought summit, and the other two segments each dealt with a thorny nutrition topic: type 2 diabetes reversal and salt in the diet, respectively. 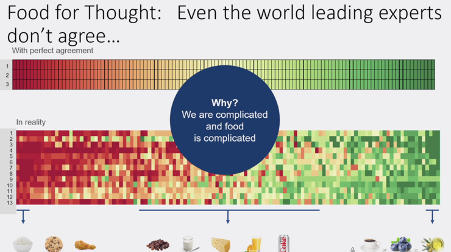 Prof Tim Spector reminded delegates of the complexities of nutritional science that contribute to the many ongoing nutritional controversies.

For those with a desire to view all of the segments in Days 1 and 2, you’ll find the recordings at the base of this article for your viewing and educational pleasure. For those who’re short of time, let me give you the take homes I felt were most relevant (albeit with some of my own spin on them) from the Day 1 sessions: 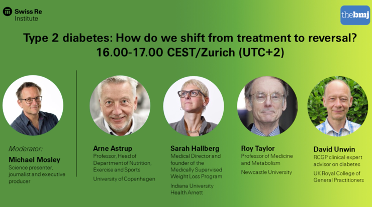 It is the complexity of nutritional science, still an emerging discipline, that makes it so hard to achieve consensus.  Big differences in results of studies on individuals are seen as compared with those on populations. Interactions are multi-layered (and multi-trophic), between animals, plants and microbes, along with all of their respective genes. They all function, in turn, in incredibly diverse and often changing environments, with and without highly variable amounts of human interference. All that before you throw in the effects of economics and politics.

And people wonder why there are so many different views on what constitutes a healthy plate of food.

Dive in below to the recordings from Food For Thought 2020 – and congratulations to Swiss Re and BMJ for making the summit happen again, albeit virtually.

RECORDINGS OF DAYS 1 AND 2 SESSIONS, FOOD FOR THOUGHT 2020 (virtual summit)

>>> Back to Reverse Diabetes Naturally campaign