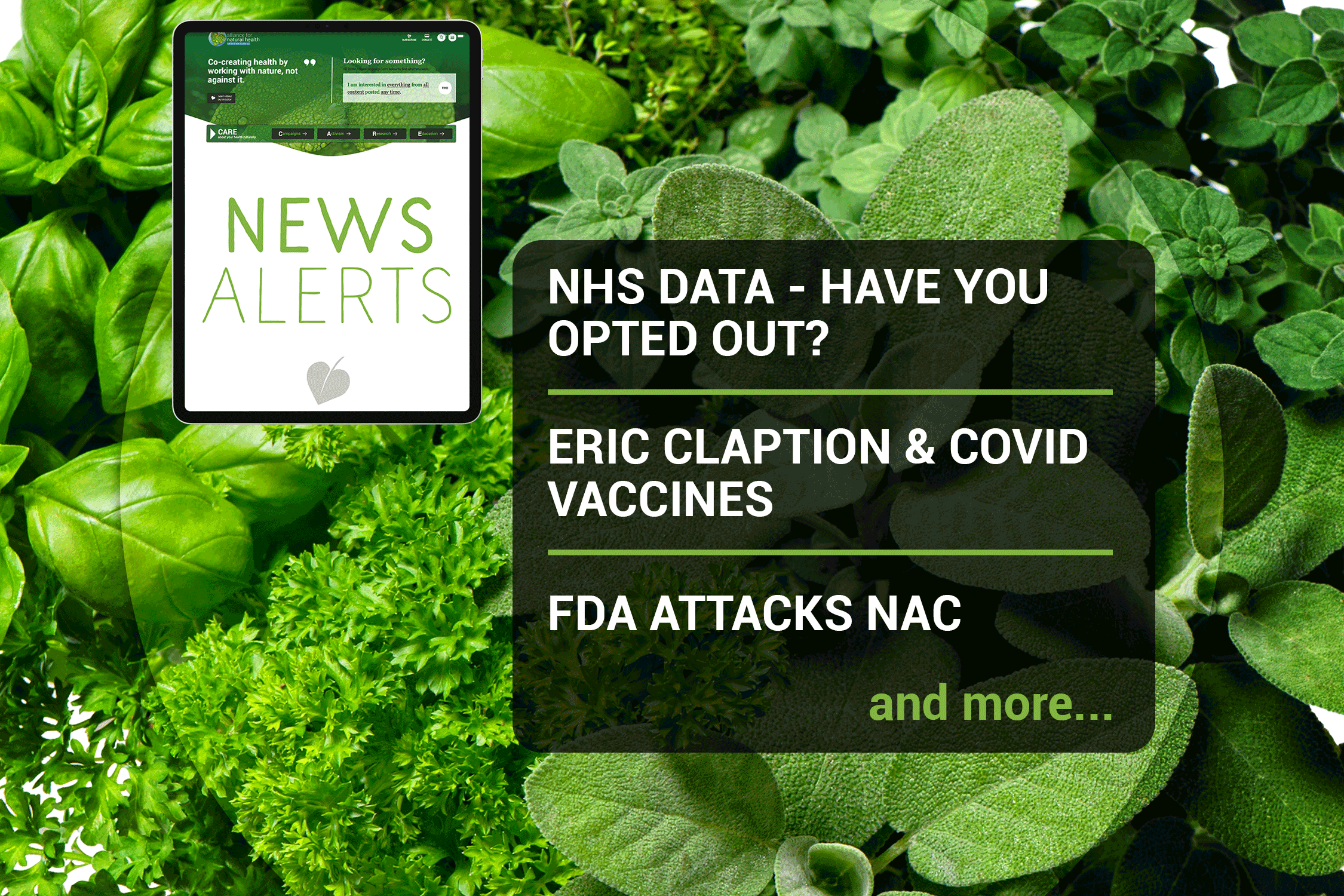 UK citizens: your medical records at risk of being sold!

If you're a British citizen, your GP medical records are at risk of being sold to the highest bidder unless you opt out! You have until the 23rd June 2021 to tell the NHS that you don’t want your GP medical records to be digitised and used for ‘research’ purposes. The NHS says it won’t sell your data to the highest bidder, but given its track record, it’s entirely possible this will happen. So, if you haven’t already opted out now is the time to do so. MedConfidential explains the opt-out process and provides an opt-out form you can use to prevent your private medical information falling into the hands of greedy Big Tech companies lining up to dip into the NHS data pot. UPDATE 09/06/21 - The NHS has now moved the date by which you should opt out by to 1st September 2021.

The US Food and Drug Administration (FDA) has sent out warning letters to seven supplement companies selling hangover ‘cures’ containing N-acetyl-L-cysteine (NAC) due to what the FDA consider to be illegal disease treatment claims. The warnings have prompted Amazon US to remove products containing NAC from sale. NAC was approved as a drug in 1963, but has been allowed to be used in dietary supplements for many years by the FDA. The Council for Responsible Nutrition has sent a letter to the FDA calling for it to reverse its about-turn on NAC. NAC is a precursor to the antioxidant, glutathione, which is produced naturally in the body and plays a critical role in the efficient functioning of our immune and detoxification systems amongst a plethora of other important functions. Is it more than a coincidence that the FDA's action has come after attention has turned to the role that NAC can play in the treatment of covid in recent months?

Have you experienced menstrual problems in recent months? If so My Cycle Story wants to hear from you. There have been many reports both from women vaccinated against covid-19 and unvaccinated women who are experiencing problems with their periods including menopausal women whose periods have restarted. Following her tweet about the subject, Dr Kate Clancy set up a study to assess the problem. Now My Cycle Story, a “collective of concerned physicians, scientists and scientists”, has launched a study to find answers to an issue worrying many women globally. If you’ve experienced irregularities in your menstrual cycle that you think may be linked to covid vaccines (whether you're vaccinated or unvaccinated) then the team want to hear from you. The online survey takes 15-20 minutes to complete, which will help researchers to understand more about what is happening. The more women who participate, the better the dataset and the easier it will be to gain more of a picture of what is or isn't occurring. If you are interested in taking part, please click here to take the survey and share your experiences.

Dangerously high levels of a group of highly toxic and persistent industrial chemicals called polyfluoroalkyl substances (PFAS), sometimes referred to as 'forever chemicals', have been found in US mother’s breast milk. A new study published in Environmental Science & Technology collected 50 samples of breast milk and discovered levels of PFAS, widely used in consumer products since the 1940s, that were nearly 2,000 time higher that those advised as safe in drinking water. Such chemicals are linked to a variety of health issues including liver disease, cancer, thyroid issues and lower sperm counts. Lead researcher, Erika Schreder, said the study shows that newer chemicals are just as toxic as the ones they replace.

The UK government has set out proposals to turn the screws on online platforms to increase censorship of information not deemed appropriate. News of an Online Safety Bill was announced in the Queen’s Speech during the recent opening of Parliament, ostensibly to protect users online and make the UK the safest place in the world to be online. The legislation will allow regulator Ofcom to levy huge fines and even block access to sites that do not comply with instructions to remove content. Those opposing such legislation have labelled it a disaster for privacy and free speech. Big Brother Watch’s, legal and policy officer, Mark Johnson, said it  “…introduces state-backed censorship and monitoring on a scale never seen before in a liberal democracy”. The bill claims to clamp down on online ‘misinformation’ and ‘disinformation’ although the Bill does not define the terms potentially leaving Ofcom to make up its own rules. Rather than making the UK a world leader in online safety, it will lead the world in state-controlled censorship that’s only one step behind that implemented by countries such as China.

In an explosive new book, members of the UK’s Scientific Pandemic Influenza Group have expressed regret over the use of fear tactics to control people’s behaviour in the UK during the pandemic. The revelations come as part of a new book ‘A State of Fear’: how the UK government weaponised fear during the Covid-19 pandemic' written by journalist, author and photographer, Laura Dodsworth. Such is the interest in the book that it immediately sold out after its launch. Described as “…a book about fear” and a government that weaponised fear to make the UK the “most frightened country in Europe”. So successful has the Behavioural Insights team been at harnessing people’s fear in the UK, it now sells its expertise around the world supporting the demise of democracy and descent into global totalitarianism.

Robin Daly is the founder of integrative cancer charity Yes to Life that we've worked closely with for over a decade. At the age of 70, Robin thought he’d hung up his cycling helmet and his thirst for adventure, but it turns out he has at least one more challenge left in him! This time he’s celebrating turning 70 with a 525 mile fundraising ride from Lands End to the North Foreland Lighthouse near Broadstairs, Kent in the UK. He will be accompanied by his “trusty (and scarily fit) biking neighbour”, Rob Dunn. Their epic journey will start on the 18th August 2021 with the aim of making oodles of money for Yes to Life “...because the charity urgently needs the funds”. Robin has set up a Just Giving page to collect donations. If you’d like to support Robin’s fundraising epic for Yes to Life please click here.

Legendary guitarist, Eric Clapton, has spoken openly about his regrets at being vaccinated against covid-19. In a frank message sent to Monotti Protocol Producer, Robin Monotti Graziadei, he said, “I should never have gone near the needle”. Believing he should be vaccinated to protect himself due to poor health, he suffered severe adverse reactions following the first dose of the AstraZeneca vaccine, but he then went ahead with the second dose. The adverse reactions he experienced resulted in his hands and feet being either frozen, numb or burning (he already suffers from peripheral neuropathy) to such an extent that he feared he'd never be able to play again. Happily, he has recovered the use of his hands and feet and has released the protest song by Van Morrison,‘Stand and Deliver’ recorded last year with Morrison. It couldn't be more apt in today's world. A few of the words are: “Do you wanna be a free man/ Or do you wanna be a slave?/ Do you wanna wear these chains/ Until you’re lying in the grave?.....Magna Carta, Bill of Rights/ The constitution, what’s it worth?/ You know they’re gonna grind us down, ah/ Until it really hurts/ Is this a sovereign nation/ Or just a police state?/ You better look out, people/ Before it gets too late.” Thank you for telling it the way it is, Eric and Van!