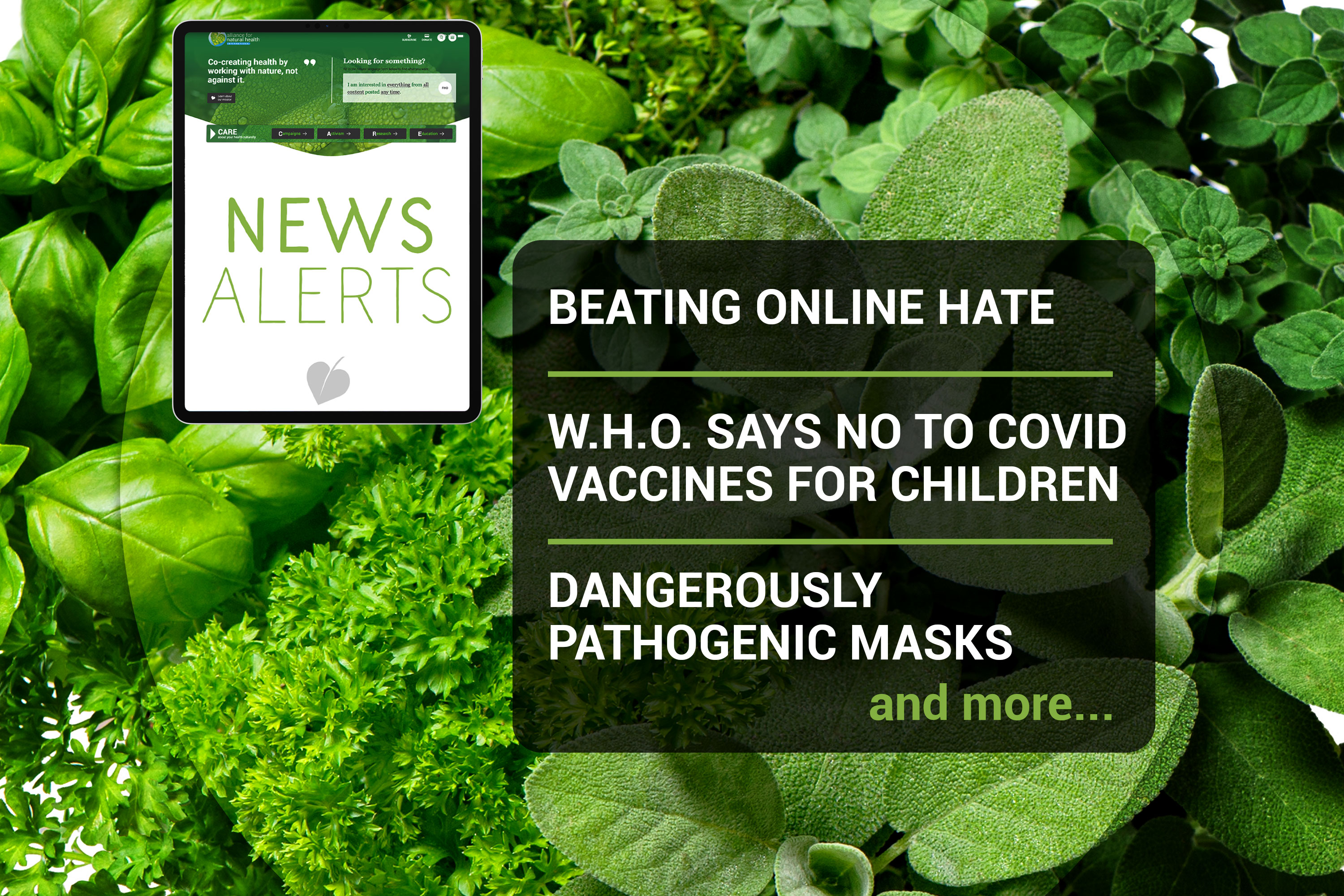 The coronavirus crisis has seen online hate become acceptable when aimed at those who hold a different viewpoint to the authorities, be they eminent scientists, citizen scientists or even celebrities.Ironically, its flames are fanned y the likes of the Center for Countering Digital Hate. Digital hate is nothing new, but now, somewhat surprisingly, BT Sport has partnered with top UK footballers to form a campaign called Hope United to tackle online hate in any form. The campaign’s mission reaches to the heart of the matter when it says, “Hope can beat hate if we all stand together”. It’s time for all voices to be heard and respected when it comes to covid-19 regardless of what those voices may be saying.

No evidence of asymptomatic transmission

A recent study published by the Centres for Disease Control and Prevention (CDC) in the US found that, “…little to no transmission occurred from asymptomatic case-patients”, rather, viral particles are transmitted by people that are experiencing mild illness (presymptomatic). This report echoes the remarks made during a press briefing by in June 2020 by Dr Maria Van Kerkhove, Head of the World Health Organization’s Emerging Diseases and Zoonosis unit. The coronavirus crisis has been driven and prolonged by instilling a fear of healthy people who may be asymptomatic. This new study shows that contrary to what we’ve been told in the past 15 months, to be classified as sick, individuals need to display symptoms and have a positive test, which is how disease has historically always been diagnosed.

WHO says 'no' to covid vaccines for children (then changes its message!)

The World Health Organization (WHO) updated its advice for covid vaccination in children stating they should not be vaccinated against covid currently. Its specific advice yesterday on 22 June 2021 stated that, “There is not yet enough evidence on the use of vaccines against COVID-19 in children to make recommendations for children to be vaccinated against COVID-19.” Later on the same day, 22 June 2021, the advice was changed to state that, "More evidence is needed on the use of the different COVID-19 vaccines in children to be able to make general recommendations on vaccinating children against COVID-19." (see side by side comparison from Children's Health Defence). Even though the WHO was explicit in its advice that children should not be vaccinated and still, after the edit, continues to be cautious in its approach to children, countries such as the US and Canada are forging ahead with vaccinating children aged 12 and over. There has been a significant pushback by parents, now it seems the WHO has been brought back on side the pharma companies and is preparing parents for the vaccination of children with experimental vaccines despite it's earlier advice against such action. A recent Harris poll in the US has found that 25% of parents questioned are not prepared to give their children covid vaccines due to the lack of long-term safety and effectiveness data - something with which the WHO is very well aware. Children are at almost non-existent, risk from covid-19 and pose little danger to adults. ANH founder Rob Verkerk PhD shared his personal opinion on why he won’t be consenting to his youngest daughter being vaccinated in a very powerful article last week.

A brand new meta-analysis of 24 trials led by Dr Tess Lawrie of the BIRD Group and published in the American Journal of Therapeutics adds further weight to the evidence supporting the use of ivermectin to treat and prevent serious covid-19 disease. The analysis found that using ivermectin to treat covid-19 illness significantly reduces the risk of death and may reduce the number of people becoming severely ill if used early on. The researchers suggest that due to its known safety and low costs it could have an extremely positive impact on treating covid-19 disease.

The US Food & Drug Administration (FDA) has declared the Innova rapid flow test is unfit for use and fit to be ‘thrown in the bin’. The vast number of false positives from the tests are leading to contamination investigations. Despite the FDA’s concerns, the UK medicines regulator has extended the authorisation for the use of Innova tests in the UK given they are a cornerstone of the govt’s Operation Moonshot programme. A recent investigation published in The Conservative Woman has cast further doubt on the UK’s reliance on the Innova test. Whilst a Letter to the Editor published in the Journal of Infection has called the accuracy of PCR tests into doubt. Using data from a large German lab, the researchers found that more than half of those who received positive test results were unlikely to have been infectious and the tests results should not have been used to diagnose covid-19 infections. Worryingly, the Innova rapid tests are widely used in schools where the false positive results are likely driving the narrative about children as super spreaders ahead of the push for vaccination.

A group of parents in California have had six masks that had been worn by children (aged 6-11) and one adult tested by a lab at the University of Florida. The masks were either new or freshly laundered prior to being worn and were worn for 5-8 hours. A t-shirt worn by one of the children and new masks were used as controls. The results indicated that 11 pathogens described as dangerous were found on the masks including pneumonia and meningitis causing bacteria, along with antibiotic-resistant bacterial pathogens. The tests confirm what many have been saying about the potential health issues associated with mask wearing by citizens and should raise a very big red flag for the authorities mandating an intervention that provides little or no protection against the transmission of SARS-CoV-2, but instead conveys significant health risk.

Vaccine passports - a tool for coercion?

It’s not a vaccine passport according to officials in California, yet the new system allows those who’ve received a covid vaccine to be able to prove their vaccine status. France has given nightclubs the go ahead to reopen but you will only be able to visit if you can prove you’re fully vaccinated via its covid pass or have a negative test in the previous 72 hrs. In the UK, the Public Administration and Constitutional Affairs Committee has slammed the government’s continued encouragement of the use of covid certification saying there’s no justification for its use. In its report summary, the Committee states that the Government has failed to support its case scientifically and accuses the Government of contempt for Parliament for not notifying or consulting Parliament of its decision to start using Covid certification. The introduction of vaccine related certification around the globe is yet another totalitarian measure to crush freedoms, privacy and civil liberties and doesn’t take into account that there may be additional medical reasons why someone can’t be vaccinated. We must continue to stand up for our rights in the face of discrimination, bullying and coercion.

Authorities appear to be becoming increasingly desperate as more and more citizens refuse covid vaccines as concerns about their safety increase.

Increasing numbers of private businesses are starting to require vaccination either for staff or customers, with some getting involved in what amounts to bald bribery to induce people to be vaccinated:

Junk food is estimated to have made up at least 20% of US kids’ diets between 2001-2018 according to new research published in The American Journal of Clinical Nutrition. Researchers found that 1 in 5 calories consumed by children aged between 2 and 19 years came from junk food including sweet bakery products, other savoury snacks, desserts, sweets and biscuits. The study noted that there was a significant increase in the consumption of snack bars by both adults and children along with food from out-of-home sources such as restaurants. In a high profile move, footballer Cristiano Ronaldo removed bottles of Coca Cola from the desk at a press conference and replaced it with water as the healthier option. Instilling healthy eating habits from a young age is essential in the bid to reduce the risk of children developing chronic metabolic dysfunction that leads to chronic disease at ever younger ages.

A new study from Israel has confirmed what many scientists, doctors and other health practitioners have said throughout the coronavirus crisis – hospitalised covid-19 patients with low vitamin D status are more likely to become severely ill. The preprint study found that 26% of those admitted to hospital who were deficient in vitamin D died, against less than 5% of those who had good levels of the vitamin. Our vitamin D campaign page offers a wealth of information on the subject, as well as how to find your vitamin D level and how to optimise it so you can reduce your risk of serious illness from a range of viruses.