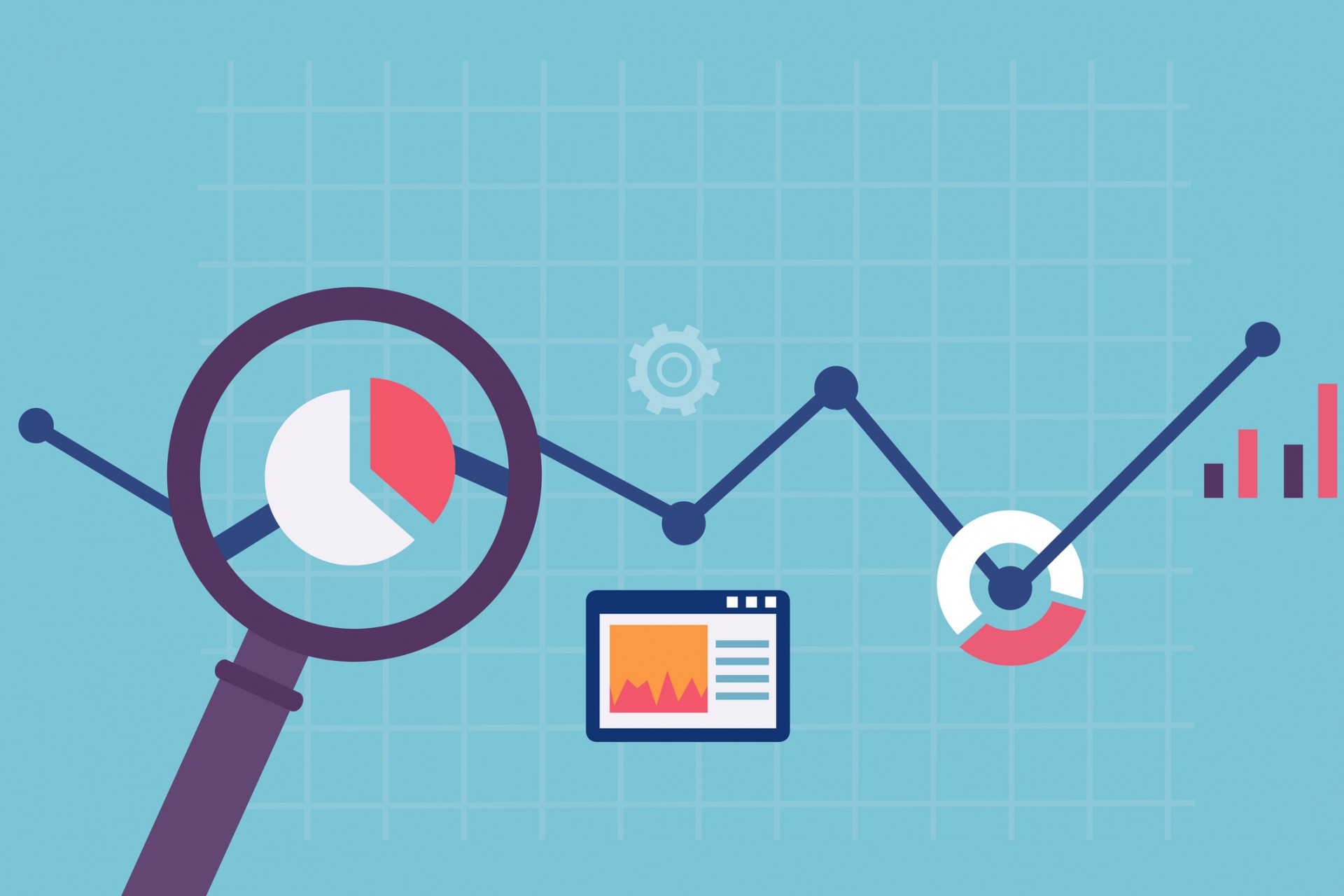 Professor Edzard Ernst, the UK’s first professor of complementary medicine, has probably made the single largest contribution to investigating the efficacy of Complementary and Alternative Medicine (CAM), anywhere in the world.

PROFESSOR EDZARD ERNST, the UK’s first professor of complementary medicine, has probably made the single largest contribution to investigating the efficacy of Complementary and Alternative Medicine (CAM), anywhere in the world. From his seat at Peninsular Medical School at Exeter University, this body of work amounts to more than 1000 papers in peer-reviewed journals, published over a 15-year period.

Critical investigation around the efficacy of any branch of medicine is obviously to be commended, and, indeed, is a requisite for its successful development. However, this can only be the case if objectivity and methodology are beyond reproach. In determining the quality of the methodologies used in undertaking systematic reviews, meta-analyses and similar forms of research analysis, we need to distinguish between what are ‘generally accepted’ methodologies, which might have been lifted from a related branch of science, and those which are able to withstand scrutiny for the particular purpose for which they are used. This, in the case of Prof Ernst’s methods, is where the problems begin.

Prof Ernst has moved a long way from his humble beginnings as a recipient of the therapies about which he is now so critical. Profiled by Geoff Watts in the British Medical Journal, Ernst reveals: “Our family doctor in the little village outside Munich where I grew up was a homoeopath. My mother swore by it. As a kid I was treated homoeopathically. So this kind of medicine just came naturally. Even during my studies I pursued other things like massage therapy and acupuncture....As a young doctor I had an appointment in a homoeopathic hospital, and I was very impressed with its success rate. My boss told me that much of this success came from discontinuing mainstream medication. This made a big impression on me.” (BMJ Career Focus 2003; 327:166; doi:10.1136/bmj.327.7425.s166).

Prof Ernst, having left his internship and clinical practice, has become one of the world’s most influential arbitrators of CAM. This transition has moved him from the hotbed of practical and anecdotal efficacy to the supposedly objective world of analysis, where the private environment of the practitioner’s clinic, steeped in the altruism of the Hippocratic Oath, has been replaced with the colder, more exposed and uncertain environment of the clinical trial. Here, Prof Ernst has firmly established himself as one of CAM’s biggest detractors. Robin McKie, science editor for The Observer (December 18, 2005) reported Ernst as saying, “Homeopathic remedies don't work. Study after study has shown it is simply the purest form of placebo. You may as well take a glass of water than a homeopathic medicine.” In fact, Ernst’s work is likely to be the single biggest trigger threatening the continued provision of homoeopathic services from the Royal London Homoeopathic Hospital, services that have been delivered since 1849 (Denis Campbell & Mary Fitzgerald, The Observer, April 8, 2007).

Prof Ernst’s U-turn appears to lie within the cloudy world of evidence-based medicine (sometimes referred to as EBM), a world in which he has both flourished and become enslaved. The methods contained within his toolbox, used repeatedly across a very wide range of modalities in CAM, are not always as objective as conventional medical proponents tend to claim. The fact that Ernst is himself a skeptic (he, for example, gave the keynote address to the 11th European Skeptics Congress on September 5–7, 2003), might suggest a less than open mind—an attribute that more or less defines the objective scientist.

His standard, prescriptive analytical approach is based on analysing in detail a limited number of studies that meet specified, but very narrow, criteria. Specific studies are selected because they are regarded by the investigators as being methodologically and statistically superior to other studies. The gold standard that takes centrepiece in Ernst’s toolbox is of course the double-blind, Randomised Controlled Trial (RCT). Observational studies are generally rejected by proponents of evidence-based medicine like Ernst because they lack the placebo controls and randomisation associated with the RCT. While, for the purpose of evaluating the effects of a pharmaceutical drug, the RCT may have considerable value because the differences between the control (or placebo) group and the treatment group may be largely attributable to the ‘specific therapeutic effect’ under investigation, in the case of many CAM therapies and nutritional intervention studies, this is simply not the case.

In a presentation made at the CAM Expo at Excel, London, in October 2007, Prof Ernst identified eight effects that contributed, additively, to what he described as the ‘total effect’ of a medical or CAM intervention. These effects included the ‘specific therapeutic effect’ (the direct effect caused by the treatment itself), the natural history of the disease (which might follow a particular progression or decline during treatment), regression to mean (the natural tendency for the body to move towards a homeostatic centre-point of ‘normal’ health), placebo effect (the beneficial effect caused by a patient’s expectation of a treatment), Hawthorne effect (effects caused as a result of behavioural changes in the patient since undergoing ‘treatment’), as well as a range of psycho-social effects, which include the effects of the expectation of others around the patient.

In justifying the objectivity of his approach, Ernst argued that the RCT provides the vehicle to discriminate between the ‘specific therapeutic effect’ and all these other variables that contribute to the ‘total effect’ (Fig 1), which is, after all, the effect that governs the most important outcome for the recipient of a treatment. Although the difference in effects between the ‘treatment’ and ‘control’ groups would theoretically be attributable to the ‘specific therapeutic effect’, this would only be the case if the aforesaid variables were truly independent of one another and behaved identically under both experimental (clinical trial) and non-experimental conditions. 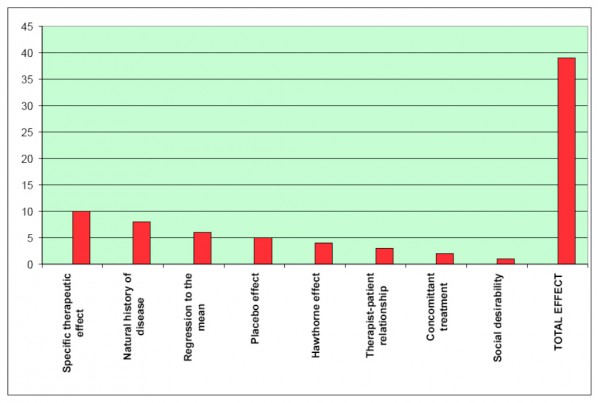 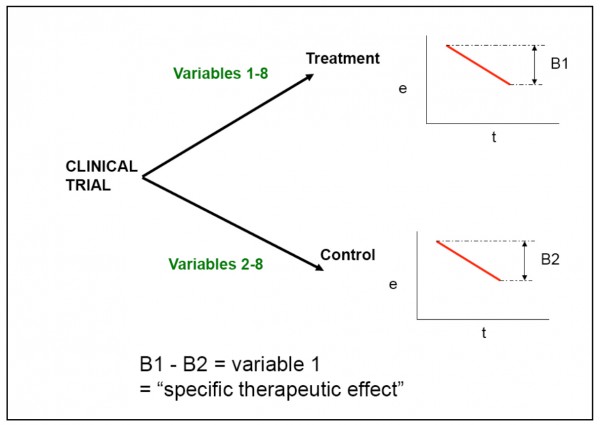 Crucially, the bio-physical-energetic interactions between practitioner and patient, as well as internal neurophysiological and metabolic processes, are likely to be very different in these two contrasting circumstances. When the knowingness of reality and healing are replaced with the subdued bio-energetic responses experience within a double-blind clinical trial, it is perhaps no wonder that Ernst finds that treatment effects are so often lost in the overall noise of the experiment—falling foul to the netherworld of statistical insignificance.

A subject who is knowingly taking part in a trial, who does not know whether he or she is receiving the real or the sham (or placebo) treatment, will of course not be subject to the same influences (e.g., intention, psycho-energetic) from the other seven variables as the patient who is knowingly receiving a treatment that has been chosen because it is believed to have a very good chance of aiding recovery.

Additionally, it also follows that Prof Ernst and his colleagues appear to be evaluating the ‘wrong’ variable. As Ernst himself admitted, his team are focused on exploring only one of the variables, the ‘specific therapeutic effect’ (Figs 1 and 2). It is apparent, however, that the outcome that is of much greater consequence to healthcare is the combined effect of all variables, referred to by Ernst as the ‘total effect’ (Fig 1). Ernst does not appear to acknowledge that the sum of these effects might differ greatly between experimental and non-experimental situations.

Adding insult to injury, Ernst’s next major apparent faux pas involves his interpretation, or misinterpretation, of results. These fundamental problems exist within a very significant body of Prof Ernst’s work, particularly that which has been most widely publicised because it is so antagonistic towards healing cultures that have in many cases existed and evolved over thousands of years.

By example, a recent ‘systematic review’ of individualised herbal medicine undertaken by Ernst and colleagues started with 1345 peer-reviewed studies. However, all but three (0.2%) of the studies (RCTs) were rejected. These three RCTs in turn each involved very specific types of herbal treatment, targeting patients with IBS, knee osteoarthritis and cancer, the latter also undergoing chemotherapy, respectively. The conclusions of the study, which fuelled negative media worldwide, disconcertingly extended well beyond the remit of the study or its results. An extract follows: “Individualised herbal medicine, as practised in European medical herbalism, Chinese herbal medicine and Ayurvedic herbal medicine, has a very sparse evidence base and there is no convincing evidence that it is effective in any [our emphasis] indication. Because of the high potential for adverse events and negative herb-herb and herb-drug interactions, this lack of evidence for effectiveness means that its use cannot be recommended (Postgrad Med J 2007; 83: 633-637).

Putting the boot in

While patient-driven support for ‘CAM’ has fuelled its evolution over millennia, confounded, western scientific methods, coupled with a sometimes antagonistic media encouraged by corporate PR machines and over-zealous regulators, could now constitute its ultimate threat. There are, for example, some 3,000 hospitals in China which currently provide Traditional Chinese Medicine treatments to nearly 234 million patients each year (Peoples Daily Online, October 17 2007). Such traditions will become increasingly threatened until scientific methodologies have been developed that are able to account for the complex bio- physical-energetic interactions that are initiated between practitioner and patient in non-experimental, clinical situations.

The first step in resolving this gross abuse of science is surely to recognise that appropriate methods have yet to be developed. In the meantime, the limitations of existing methodologies need to be better appreciated. Perhaps Prof Ernst should reconsider his observations during his internship several decades ago—as well as the words of his mother. Such a re-appraisal could, after all, inspire his second major U- turn, bringing him full circle back to where he started. It would be, however— metaphorically—a tough pill to swallow given that Prof Ernst would have to accept that so much of his life’s work had been both to little avail and was scientifically invalid.