Home News Is Wikipedia the font of accurate knowledge that it professes to be? 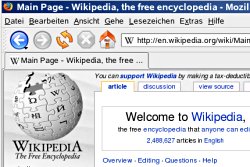 Is Wikipedia the font of accurate knowledge that it professes to be?

Many questions have been asked of late about the accuracy and validity of the information you find on Wikipedia.&nbsp; Read the latest article from the Dr Rath Health Foundation and make your own mind up.

Wikipedia: Free access to the sum of all human knowledge, or just another way of supporting the scientific, political and social status quo?

From the point of view of its founders, Wikipedia must surely be seen as a rip-roaring success. A multilingual, Web-based, free content encyclopaedia project, created in 2001 and written collaboratively by volunteers from all around the world, it has rapidly grown to become one of the world's top ten most popular web sites. These days, when conducting a Google search on almost any subject, in the majority of cases a Wikipedia article will come up either top of the rankings or, at the very least, amongst the top ten results. Increasingly however, serious questions are being asked regarding the reliability of its content.

As the article below shows, Wikipedia can sometimes be highly inaccurate – especially so in the case of articles on subjects related to natural, non-pharmaceutical forms of healthcare, which, in sharp contrast to those on issues related to drug-based medicine, it tends to treat in a decidedly sceptical manner. Moreover, by effectively forcing its editors to rely on medical journals, books published by "respected publishing houses" and mainstream newspapers for their references, the reality is that much of Wikipedia's healthcare-related content is essentially just supporting the same pro-pharmaceutical and corporatist ideologies as are pumped out on a daily basis through the world's Big Media and publishing outlets.

Whilst there is some controversy as to whether or not he should be credited as the sole founder, or the co-founder, of Wikipedia, there can be no doubt that Jimmy Wales, an American Internet entrepreneur, is its public figurehead. So far as the world's media are concerned, Wales and Wikipedia appear to be becoming almost as synonymous as Gates and Microsoft, or Branson and Virgin. Perhaps not surprisingly therefore, it turns out that Wales has big ambitions for Wikipedia, as particularly demonstrated by the following two extracts from an interview he gave in 2004:

"It is my intention to get a copy of Wikipedia to every single person on the planet in their own language. It is my intention that free textbooks from our wikibooks project will be used to revolutionize education in developing countries by radically cutting the cost of content."

"Imagine a world in which every single person on the planet is given free access to the sum of all human knowledge. That's what we're doing."

Startling stuff, isn't it? After all, if your ambition is for your website's content to be used as the future basis for the education of the planet, you'd better make very sure that your content is accurate and that it encourages readers to approach new ideas with an open mind.

And this, despite all the hype that surrounds it, is where Wikipedia comes up rather sadly lacking. For, whilst its policies and guidelines are theoretically designed to ensure that articles are reliable and take a neutral point of view, the fact is, and as we shall see, that in practice this is unfortunately not always proving to be the case.

So far as its healthcare-related articles are concerned, the reality is that by effectively forcing its contributors to rely on what it sees as "reliable sources" for their material and references – e.g. orthodox medical journals, books published by "respected publishing houses", mainstream newspapers and so on – far from providing free access to the sum of all human knowledge, Wikipedia is essentially just supporting the same the same pro-pharmaceutical and corporatist ideologies as are pumped out on a daily basis through the world's Big Media and publishing outlets.

Think that last sentence was too strong?

Well, if you do – in other words, if you're the sort of person who believes that everything you read in your daily newspaper and watch on the TV news must be true – (because newspapers and news agencies are free from bias and have a reputation for fact-checking and accuracy, right?) – then this might be a good moment to switch off your computer, pick up your daily newspaper or turn on the TV instead.

But if, on the other hand, you know that journalists telling us that taking vitamin supplements may shorten our life expectancy are sometimes put under pressure to back the studies making these claims, and that shadowy intelligence agencies are pumping out black propaganda to manipulate public opinion – and that the media simply swallow it wholesale, then you'll know that what you read in your daily newspaper and watch on the TV news can sometimes be anything but reliable. By extension, therefore, the reality is that this also applies to what one reads on Wikipedia.