There's more evidence from the last Codex nutrition committee meeting, held in Cape Town, that Codex is primarily about creating a global trading environment suitable only for the world's largest corporations. Natural health aware members of the general public need to take action now, before it's too late.

The US-based National Health Federation (NHF) was the only health freedom organisation represented at this year's session—the 30th—of the Codex Committee on Nutrition and Foods for Special Dietary Uses (CCNFSDU). This year's location for the meeting was Cape Town, South Africa.

Have a look at the NHF's report of the meeting, which includes mention of some of the gains made by the delegation. 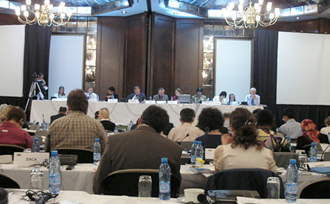 Interestingly, the International Alliance for Dietary/Food Supplement Associations (IADSA), also represented at the meeting as an official Observer, issued a release following the meeting proclaiming a great victory on the basis of the deletion of a single word ('clinical') in the committee's Proposed Draft Recommendations on the Scientific Basis of Health Claims.

While IADSA's apparent intention in this area is supported by the ANH, to allow the totality of evidence from all sources to be considered in the approval of a health claim, it is important to not overstate particular gains. The risk being that natural health interests then believe the job is done and there is no further need for concern!

Unfortunately, the ANH is somewhat less exuberant about the impact of the deletion. Here's our comment below:

The International Alliance for Dietary/Food Supplement Associations (IADSA), representing the major natural products industry trade associations around the world, is clearly excited about their efforts to help ‘lower the bar’ in terms of data requirements for health claims that were previously set to require pharmaceutical industry ‘gold standard’ evidence in the form of randomized placebo controlled trials (RCTs). Such trials are not only prohibitively expensive for all but the largest food and pharmaceutical companies, they are also not necessarily the most appropriate scientific tools for the substantiation of beneficial effects of food and nutrients.

However, the report of the 30th Session of the Codex Committee on Nutrition and Foods for Special Dietary Uses, held in Cape Town, South Africa, November 1-7, 2008, gives a somewhat more optimistic account than that borne out of the text that was actually agreed at the meeting. In short, although there is useful recognition that well-designed epidemiological studies can be used as supporting evidence, the primary evidence required is still from intervention studies.

In addition, the deletion of the term ‘clinical’ from the text—hailed as big victory by IADSA—is perhaps less significant than some other amendments to the proposed text made by the working group responsible for the proposal led by France. Removing ‘clinical’ from the sentence “Health claims should primarily be based on evidence provided by well-designed human intervention clinical studies” does not in itself lead to any increased weight apportioned to observational or epidemiological studies. Why? Because observational or epidemiological studies—studies of human populations—are very specifically not intervention studies! The very next sentence of the proposed text reminds us of this, viz: “Human observational studies are not generally sufficient per se to substantiate a health claim but where relevant they may contribute to the totality of evidence.”

Further in the Proposed Recommendations, the situation is clarified: “Some Health claims, such as those involving a relationship between a food category and a health effect,  may be substantiated based on observational evidence such as epidemiological studies.  Such studies should provide a consistent body of evidence from a number of well-designed studies.” What are the implications of this? The primary one is as follows: even a single, so-called “well-designed epidemiological study” is cost prohibitive for most food and supplement manufacturers. The fact that “a number’ of such studies is required most certainly excludes the vast majority of the industry. Multiple epidemiological studies can only really be considered with substantial government research grants. These very rarely include studies involving dietary supplements. So, is this really a win for the natural products industry? We think not, at least not yet.

But given that Pfizer, Wyeth and Merck and a clutch of other pharmaceutical companies are listed among the claimed 20,000 companies that are members of IADSA, perhaps we should not be surprised that IADSA’s efforts have had little or no beneficial impact on smaller food and dietary/food supplement companies. The ultimate loser will of course be the consumer who will—unless the tide is changed— increasingly be exposed only to health claims afforded by the world’s largest corporations. This situation contrasts starkly with the fact that it is small businesses in the natural products sector that have, over the past three or more decades, been the primary innovators in the field of natural health.

As if trying to avoid any further debate on this key issue, the committee elected to fast forward the 8-step process used by Codex, by recommending to skip Steps 6 and 7, going direct to final Step 8.  This type of progress should always be viewed with suspicion—and in this case, it is clear what the committee, major governments and their Big Food and Big Pharma allies are up to.

Tell your government and your parliamentary representative how you feel!  Health conscious members of the general public must inform their respective governments about their concerns about how Codex is setting up a trading environment that more or less excludes small to medium sized enterprises. Small businesses have been the mainstay to so many economies, and the principal pioneers in the field of natural health. If you allow this trend towards oligopolies of massive corporations rule all areas of our life, we will continue to be increasingly separated from nature, natural food, natural products, natural living.....the real costs, and certainly not just financial, would be immense.

Also, please help ANH to continue our work, and make a donation. Any amount is gratefully received—our funding is exclusively from donations.