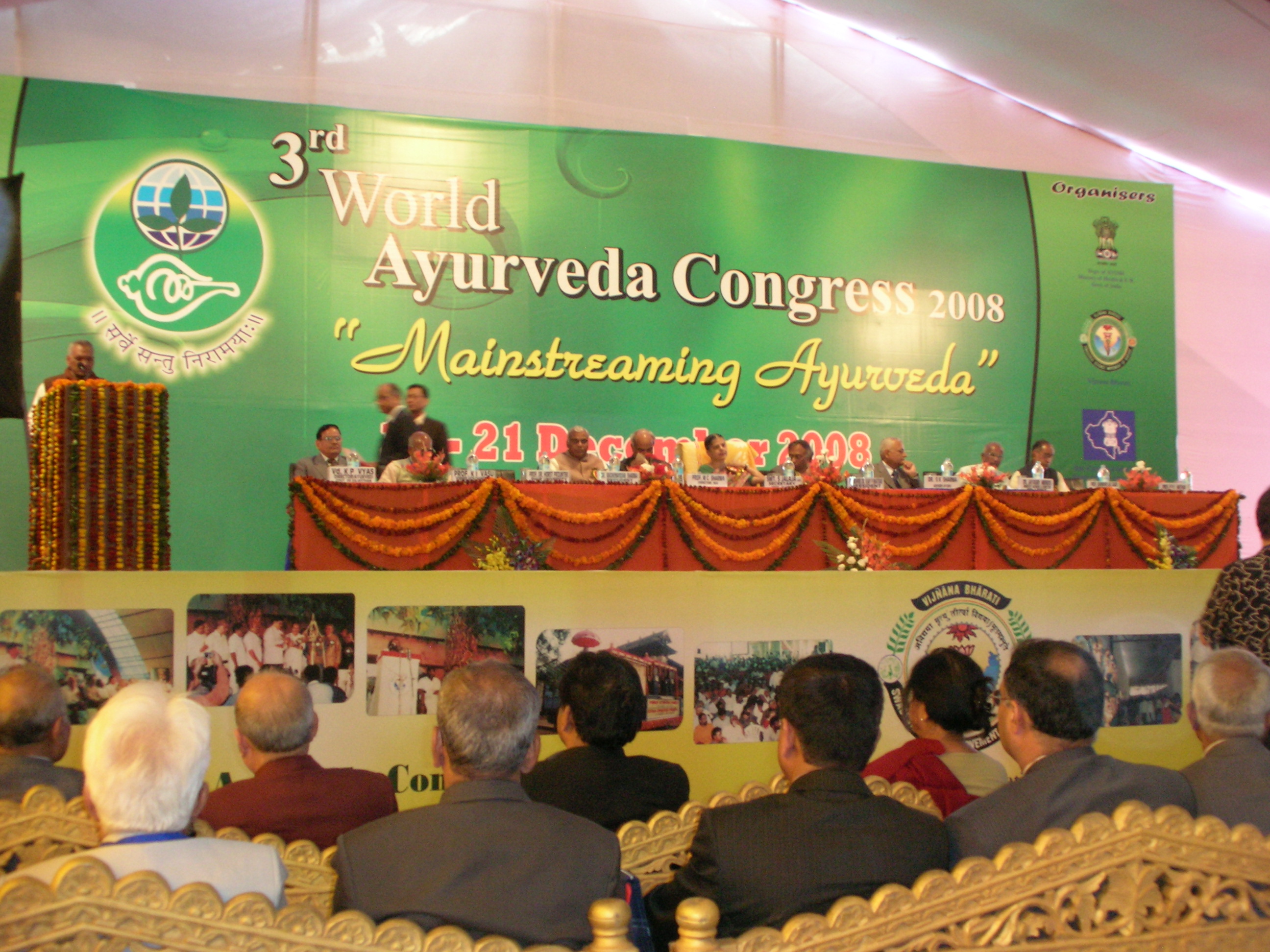 Jaipur, one of the first planned cities in India, is probably better known as the ‘Pink City’.  A name given it by the pink sandstone used in the architecture of the palace, homes and buildings found in the Old City.  It’s fitting that this is where the National Institute of Ayurveda resides, the venue for the WAC, given that the city was planned to conform to a geometric grid representing the nine divisions of the universe. 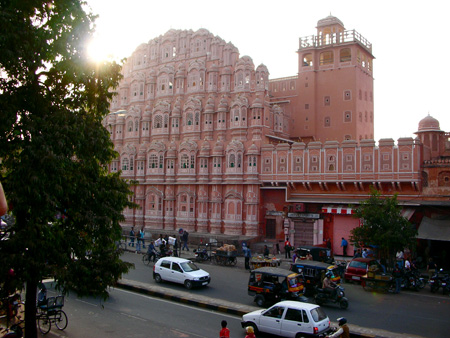 The WAC’s mission “to promote and propagate Ayurveda globally as a scientific system of health science and re-instate it's glory to serve humanity” was abundantly evident across the remarkable 400 or so lectures and plenary sessions on offer over the six days.  The event drew guests and speakers from 50 different countries and apart from the high quality of the presentations, it proved to be a hotbed for first introductions, networking and forging links for further collaboration.  The subtext to the entire event was looking for ways to allow the face of Ayurveda to change to be better accepted in the West without losing its essence, and strengthen the interaction between Ayurveda and other systems of medicine.  A tall order given the non-tariff barriers to trade being placed in its way, unwittingly or wittingly, by the European Union and elsewhere.

The ANH team were invited to attend International Forum on Global Practice and Promotion of Ayurveda, which was held off-site the day before the WAC began.  The thrust of this meeting was to invite those groups and individuals working internationally with or for Ayurveda to discuss impending global regulatory issues.  Whilst the European legislative outlook took centre stage, it was acknowledged that three issues are common worldwide: 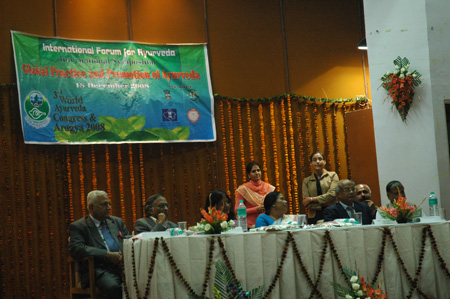 It is worth remembering that Ayurveda is more than just a system of medicine. It’s actually an entire philosophy for health and wellbeing that has existed for over 4,000 years.  Despite its age, many would argue its multi-faceted approach is better suited to today’s health challenges than unidirectional pharmaceutical drug approaches.

There is further archeological evidence emerging that Ayurveda goes back even further.  However, as with any traditional culture, documentation—at least according to western standards— is sparse given that Ayurveda was traditionally handed down from generation to generation largely as a verbal teaching.  This is not just unique to Ayurveda, but common to all indigenous cultures.  Very simply translated Ayurveda means ‘the art of living wisely’ and is a truly holistic system guiding people towards a healthier, happier and more balanced lifestyle.  It treats everyone as an individual and therefore the ‘prescriptions’ are unique, bringing balance through the use of food, lifestyle interventions, massage, yoga and herbal remedies to the person they were created for.

In India there are presently some 438,721 Ayurvedic medical practitioners; 15,193 registered Ayurvedic dispensaries; 753 hospitals offering Ayurvedic medicine; 219 Ayurvedic teaching institutions, and; an entire government department (called AYUSH) to manage it all.  AYUSH is an acronym that stands for Ayurveda, Yoga, Unani, Siddha and Homeopathy and their mission is to see “Ayurveda as a global health science serving humanity”.   For all the criticism from western science and European regulators that there isn’t enough written evidence for Ayurveda, there are in fact 6 volumes of the Indian Pharmacopoeia—European regulators just ‘conveniently’ refuse to recognise them!

The key message that came from AYUSH during the International Forum is that India (and Ayurveda) must take responsibility for Ayurveda globally, with respect to training, experts and traditional treatments.  It recognises the challenge brought by countries manufacturing cheap ‘Ayurvedic’ herbal products that are finding their way into the global supply which may be of inferior quality.  They also recognise the challenge from biopiracy, where international companies are appropriating the rights, through patents, to indigenous biomedical resources and knowledge.    To this end, the department proposes to focus on the following five areas in the coming year:

Of particular import to the ANH are points 4 and 5, regarding regulatory affairs given that we are approaching the end of the transition phase of the EU’s Traditional Herbal Medicinal Products Directive (THMPD). As of April 2011, when the THMPD is fully in force, European regulators are likely to be much less tolerant of products on the European market containing Ayurvedic herbs which are presently sold as food supplements. They will require all such products to have product licences under THMPD, but as [claimed by the ANH], the criteria and pharmaceutical standards required by the Directive have been found to be very difficult or impossible to meet in the case of herbal combination (polyherbal) products typical of non-European traditions such as Ayurveda.   Also represented from Europe were the the European Ayurvedic Association (EUAA), European Ayurveda Medical Association (EURAMA) for medical doctors and the British Association of Accredited Ayurvedic Practitioners (BAAAP). 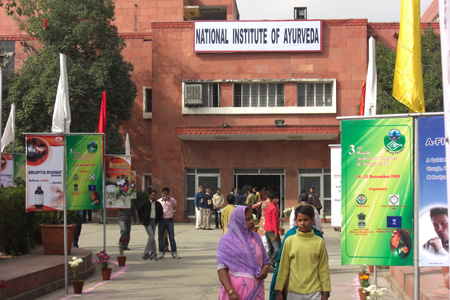 In order to make the most of the International Forum the delegates were invited to attend specific break-out meetings according to their specialty.  The plenary session confirmed that most are agreed that they want to see Ayurveda maintained in its entirety outside of India, with set standards of education and sufficient clinical practice, including time spent in an Ayurvedic hospital in India.  It was acknowledged that requirements for research differ from country or region and there is a need for more research activity in the SAARC (South Asian Association for Regional Cooperation) and ASEAN (Association of South East Asian Nations) regions, except for India.  Delegates from the United States would like to see an Ayurvedic pharmacopoeia for herbs grown and used in the Americas, with further detail regarding actives and herb/drug interactions.  This would then lead to a GRAS (Generally Regarded As Safe) list of Ayurvedic herbs.

The enhanced research activity would allow for local herbs from different countries to be studied, according to Ayurvedic herbal protocols.  It would also answer sustainability issues arising out of the expectation that India can supply the global demand for herbs and ensure standardisation and quality assurance measures are met.  There were calls from all delegates for AYUSH, and India, to lobby harder at an international level to prevent fragmentation of the philosophy and ensure that this much needed research is able to continue.  The unanimous agreement to seeing Ayurveda protected as an evidence-based medicine in Europe was no surprise.  There were also requests for the Indian Government to be more involved with the European Commission in working to change the framework of THMPD, to lift unnecessary non-tariff barriers to trade—in particular the need to show 30 years of continuous safe use, including 15 years in the EU, for any given herbal product (in its particular formulation).  This particular requirement might obstruct as much as 80% of authentic Ayurvedia polyherbal formulations from ever getting to Europe and, because it doesn’t allow for variations from traditional formulas, provides a considerable obstacle for any future innovation. 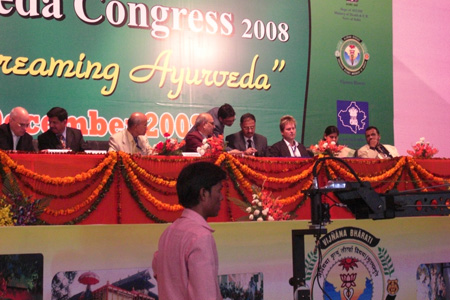 There may be a large question mark from western regulators as to whether Ayurveda is truly an evidence-based system of medicine.  But had any one of them actually attended the WAC, they would have found such a plethora of scientific and clinical presentations—over 400 in total—that covering the entire congress was an impossibility.  The presentations were divided into a wide range of topics.  As expected, research in Ayurveda was one of the principle areas of interest, with sub-sections of the programme covering specific aspects e.g. contemporary challenges, medicinal plants, minerals, metals and formulations and new product development.  Other topics included diagnostic issues, lifestyle management, surgical practices and patient care.

Of particular interest is the apparent commitment of the World Health Organization (WHO) to protecting traditional medicinal cultures.  Not only was 2008 its 60th anniversary, but it was also the 30th anniversary of the Alma-Ata Declaration, focusing on health for all by 2000.  The Alma-Ata declaration is especially significant for traditional medicine (TM), because it recognises that TM has been used for thousands of years and the great contributions to human health made by the associated practitioners.  The Declaration also called upon countries and governments to include TM in their primary health systems.  In May 2003, at the 56th World Health Assembly, the WHO passed a further resolution to protect TM and urges countries to “adapt, adopt and implement, where appropriate, WHO’s traditional medicine strategy as a basis for national traditional medicine programmes or work plans”.

It is disappointing to witness that whilst the WHO Traditional Medicine Programme was established 30 years ago and the Beijing Declaration of 2008 clearly recommitted to the original intent, western regulators remain oblivious to these aspects of the WHO strategy.

We congratulate the organisers on both the wide range of topics on offer and the no-mean-feat of pulling together so many leading professionals in their specific fields to give presentations.

The overwhelming message from the WAC is that using a bio-medical, allopathic model as the framework with which to evaluate Ayurveda, is simply not fit for purpose.  Further, that the medicalisation of health is now a global issue and the most significant threat to traditional medicinal cultures is that posed by the allopathic medicine monopoly in all western healthcare systems.  There is a pressing need for a fundamental paradigm shift in medicine to move to a truly holistic, inclusive and integrated model that recognises and serves the needs of health rather than corporate greed. 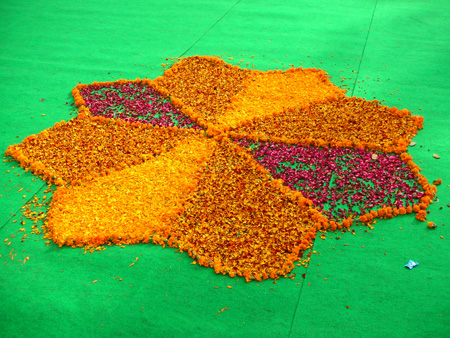 An example of the beautiful petal displays at the WAC