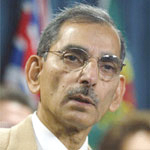 Scientists speak out about unnatural food at Toronto show

Leading scientists, including Dr Shiv Chopra, ex-Health Canada whistleblower, and Dr Robert Verkerk, from the Alliance for Natural Health, were among several speakers at last weekend’s Total Health Show 2009 in Toronto to call for urgent reform of governmental policies on the global food supply.

Dr Chopra stated that the removal of just 5 groups of products from the food supply, namely antibiotics, hormones, slaughterhouse waste, genetically modified organisms (GMOs) and pesticides, would transform the safety and sustainability of the food supply. These products, claimed Dr Chopra, were hazardous, in most cases unnecessary and offered relatively few long-term benefits. Their use, he said, was driven less by need and more by the profit motives of major corporations.  Dr Chopra, while evaluating on behalf of Health Canada virtually every red-hot topic in public health for a period of some 35 years, ranging from vaccines, to drugs and GMOs, had also been largely responsible for preventing the Canadian population’s exposure to recombinant bovine growth hormone (rBGH) induced milk. He subsequently exposed corruption within Health Canada in his recent Canadian bestseller, ‘Corrupt to the Core: Memoirs of a Health Canada Whistleblower’ (KOS Publications, 2009). 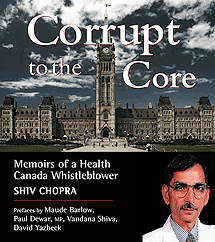 Dr Chopra’s cynicism over the ability of governments to regulate the food supply in the best interests of the public was clearly evident when he said, “People have to take charge of their destiny, they cannot any longer rely on government”.

In his presentation “Our Right to Natural Health”, Dr Robert Verkerk explained that in some parts of the world, including Canada and the European Union, fundamental human rights and freedoms were being abused by disproportionate legislation limiting consumer access to beneficial natural health products. “Natural health products are statistically the safest things we put in our mouths, being on average tens of times safer than foods and thousands of times safer than the average pharmaceutical drug. It makes no sense to develop ultra-restrictive regulations that stop those who choose to use safe, therapeutic natural health products from managing their health naturally”.

Shawn Buckley of Canada’s Natural Health Products Protection Association warned consumers that they should expect to lose up to 85% of natural health products presently in Canadian health stores over the coming years. These losses, he said, were a direct consequence of full implementation of the existing Natural Health Product Regulations (2004). However, he also made clear that if proposed consumer protection laws (Bill C-6) were passed by parliament, enforcement powers of Health Canada, together with restrictions on further products, could damage the natural products industry in Canada irrevocably.

Also attending the Total Health Show was Jeffrey Smith, long time anti-GMO campaigner and author of two best-selling books on the subject, ‘Seeds of Deception’ and ‘Genetic Roulette: Documented Health Risks of Genetically Engineered Foods’, the latter of which documents 65 known health risks linked to the consumption of GM crops.  During his six hours of lectures over the 3-day show, he argued that a rash of animal studies showing negative health effects of GM crops would be likely to be sufficient to create a world wide ‘tipping point’ against GM that would cause even major North American food suppliers to avoid genetically modified ingredients.  This shift against GM, said Jeffrey Smith, would be assisted by continued resistance to GM foods by European consumers and health ministers.

Mr Smith also warned that if governments, especially that of the USA, did not act quickly to ban the outdoor cultivation of GM crops, we would need to face serious and long term consequences caused by the unpredictable flow of modified genes into other organisms.

Dr Shiv Chopra is the most recent appointee to the ANH's Expert Committee where his decades of experience as a government regulatory scientist—as well as his understanding of the way in which regulators are influenced against the public interest by the corporations—will be of great benefit to the ANH's wider campaign.

The Alliance for Natural Health (ANH) is an international, non-governmental organisation, based in the UK. It was founded in 2002, and works on behalf of consumers, medical doctors, complementary health practitioners and health-product suppliers worldwide, to promote natural and sustainable health, using the principles of good science and good law.

Back to Say No to GM campaign page

Back to ANH campaigns