Home News Swine flu: how proportionate is the pandemic response? 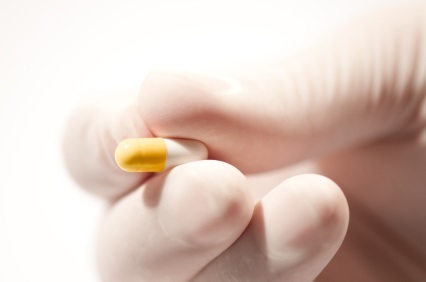 Swine flu: how proportionate is the pandemic response?

ANH's Dr Rob Verkerk provides insights on how the pharmaceutical industry is benefitting from the 'near-pandemic' &nbsp;

This article is published in CADUCEUS Spring, Issue No 77.

Dr Robert Verkerk, PhD, executive and scientific director, Alliance for Natural Health, raises questions about the new flu outbreak and how to respond to it

No one doubts the suffering that some have experienced due to the current outbreak of new influenza A(H1N1), formerly referred to as ‘swine flu’. But in the context of many other human diseases, the media reaction to the disease, as well as the international coordination of responses by governments, the pharmaceutical industry and vaccine manufacturers seems somewhat disproportionate.

To put it in context, in the tropics, particularly in sub-Saharan Africa, at least a million people die each year from malaria — the mortality figures average out at around a staggering 3,100 people each day. Worldwide, common-or-garden seasonal influenza causes 3 to 5 million cases of severe illness each year and kills between 250,000 and 500,000 people annually.

Since the new strain of H1N1 was found to be spreading rapidly in Mexico in April, causing sometimes severe symptoms or even death in persons primarily under 60 years of age, the World Health Organization (WHO) has been able to confirm by 29 May 2009 some 15,510 cases — but just 99 deaths (0.6%). In the case of the vast majority of confirmed infections of ‘new influenza’, the symptoms have been mild and present no threat to life whatsoever. 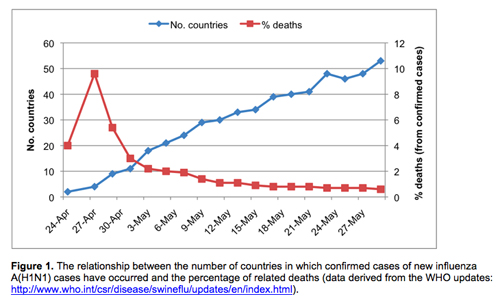 When you look at the pattern of deaths as compared with the spread of the virus, it’s clear that the virus is spreading, yet causing a declining death rate, which appears to have settled, at least for the time being, at a around half a percent of those infected (Fig 1 above). This is a common pattern in epidemics; the greatest virulence often occurs in the early stages — then it tends to peter out. While the majority of infected persons have so far suffered only mild ‘flu symptoms, one shouldn’t become complacent. A mutation or reassortment of the virus may yet cause significant death and distress. However, there is no evidence yet of any such change to the virus. We shouldn’t forget that this virus’ close relative, the avian-derived H1N1 virus that causes mostly non-lethal seasonal influenza, originally caused between 25-50 million deaths during the ‘Spanish flu’ of 1918-19. With around 90 years of opportunity, its virulence has never returned to the levels found in the early waves of infection in humans. Will it be any different for the new subtype?

What’s perhaps most disturbing is the reliance placed on pharmaceuticals and vaccines by the WHO, governments and the ‘healthcare system’ generally. The primary means of ‘dealing’ with the infection is currently the dispensing of antiviral drugs and, in particular, Tamiflu (made by Roche) and Relenza (GlaxoSmithKline).

Sales of Tamiflu in the first quarter of 2009 skyrocketed to $347 million worldwide, while those for Relenza were $324 million (see Zacks Investment Research report). Most of the sales were generated through government stockpile orders, as the WHO’s Pandemic Phase 5 alert triggers international, pandemic preparedness. This penultimate level in WHO’s pandemic rating scale has absolutely no bearing on the virulence of the virus, and is characterised simply “by human-to-human spread of the virus into at least two countries in one WHO region”. Even the highest pandemic level, Phase 6, “the pandemic phase, is characterized by community level outbreaks in at least one other country in a different WHO region in addition to the criteria defined in Phase 5.” One can’t help feeling this rating system, which completely ignores the virulence and actual harmfulness of a pathogen, is a very convenient tool for the drug companies. The last pandemic scare was three years ago, when governments then upped their stockpiles in readiness for another pandemic that never unleashed itself fully. Now the drug companies get to have another bite at the cherry, with very little evidence that their drugs are effective or are warranted in relation to the risks caused by current strains of the virus.

Vaccine manufacturers, which collaborate closely with the WHO, have also been triggered into producing a vaccine for the new strain of influenza, which is expected to be ready this autumn, for addition to the seasonal influenza vaccine. One can only imagine just how much pressure will be brought to bear on the general public around the world to receive this new cocktail vaccine later in the year.

Unfortunately, there’s been far too little talk about non-drug measures such as social distancing and hygiene as means to reduce infection, while nothing has been said officially about measures to enhance the effectiveness of the best viral control system known to humankind: the human immune system, with which each one of us is endowed. Enlightened governments (none come to mind) should be talking about combining social distancing, ‘open-air treatment’ and specific nutritional and botanical approaches (eg. boosting vitamin D levels) that are known to facilitate a better modulated, immune response. For the time being, these are things about which we must learn for ourselves because we are unlikely to hear about them from our drug-dependent governments.

For further information on the use of natural products to help modulate the immune system, see ANH expert report on avian influenza (2006).

From a scientific standpoint, the over-reliance on drugs and vaccines is deeply questionable. Of particular concern is the lack of efficacy of anti-viral drugs in dealing with serious influenza, their potentially serious side-effects, as well as the variable efficacy and safety of vaccines, especially when a pandemic strain might be quite unstable.

Given the current threat, are you prepared to be injected with a new vaccine, or be treated with Tamiflu or Relenza? Do you believe that those who opt for such approaches are given enough information on which to make an informed choice? At the ANH, we think not.