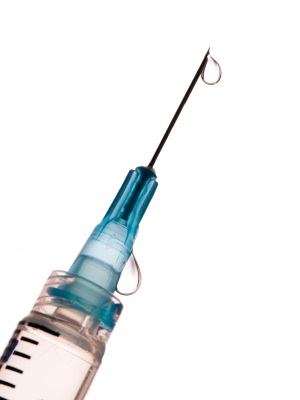 The UK's Daily Mail reported as follows on 5th October:

A teenage girl has been left brain-damaged after suffering epileptic seizures just days after being given the controversial cervical cancer jab.

Stacey Jones, 18, suffered her first seizure in March when she was 17, days after she had the Cervarix injection.

In the following weeks she had several more fits, causing such severe brain injury that she had to be admitted to a rehabilitation unit, where she is relearning simple tasks.

Stacey Jones (centre) pictured with her cousins at her 18th birthday party started to suffer epileptic seizures just days after having the cancer jab.

According to the Sunday Telegraph, the parents of the teenager, from Bilston in the West Midlands, are convinced that the vaccination caused swelling in the brain.

The swelling has been diagnosed as the cause of Stacey's neurological problems.

Mother, Julie Jones, 44, told the newspaper: 'She was such a lovely, happy-go-lucky girl, now she is just a shell.

'I really feel she has been used as a guinea pig.

'I don't think there is enough evidence that the vaccination programme is safe - this all happened days after Stacey was given the vaccine, and we don't have any other explanation for what triggered her brain injury.'

How does one measure safety in view of mounting evidence of injuries and death following vaccination?

Apart from the case of Stacey Jones, reported above, we’ve had the recent case of Natalie Morton, but of course it seems the coroner has gone a long way to suggest that Natalie’s death just 2 hours after the vaccination was coincidental.

Then we have 13-year-old Rebecca Ramagge, who has suffered increasingly debilitating joint pain, muscle weakness and fatigue following each of three HPV vaccines, in September 2008, November 2008 and March 2009 respectively.

What of Lisa Wickenden, another 13-year-old from Surrey? She developed muscle weakness following the jab and her GP told her the problem was in her mind. He referred her to a consultant psychiatrist. The psychiatrist informed her that her mental health was sound and indicated, according to the Sunday Express newspaper, that her symptoms had “a strong relationship to receiving the vaccine.”

And what about Carly Steel? Read more.

Many critics of governments' over-dependence on pharmaceuticals and vaccines urge that we take a closer look at how the money moves. One interesting perspective on this was published by LifeSiteNews.com in September 2007, as the HPV vaccination program began in Canada.

There is a pattern emerging which is very hard to ignore. It seems the HPV vaccine has the ability to trigger severe adverse reactions, which may lead to permanent debilitation or death, but that such events are rare. They are also seemingly unpredictable.

This view is of course not just our own, but has been made forcefully by Dr Diane Harper from the University of Missouri. Dr Harper is one of the foremost experts in the HPV vaccine, and a scientist who was directly involved in the clinical trials of HPV vaccines.

Read an article in US News on Dr Harper’s view on Merck’s Gardasil vaccine, a close relative of GSK’s Cervarix as used in the UK, from March 2009.

Let’s not forget, the official US government figures on Gardasil in the US, suggest that as many as 7% of adverse effects from Gardasil have involved hospitalization, permanent disability, life-threatening illness or death.

But, despite all of this, the recently updated National Health Service (NHS) website tells us that we should rest easy and continue the HPV vaccination of our children as per usual—because Natalie Morton’s sudden death was caused by a tumour, according to the pathologist involved in the post mortem. The vaccine, said the coroner, played no contributory role. Read the NHS view on this.

Perhaps the real question should have been: how qualified and experienced are pathologists in determining the rapid response of the human inflammatory system to vaccinations? Don’t they spend most of their time working with dead bodies?

This head in the sand approach from government authorities and the drug companies is reminiscent of the tobacco/lung cancer debacle that ensued during the 1970s and 1980s.

It seems it’s not so difficult to continue to declare your vaccine safe, as long as you continue to avoid linking any of the deaths or side effects to the vaccine itself. The difficulty of proving a causal association between smoking and cancer is precisely why it took decades for the associations to be recognized by governments. With the HPV vaccine, the situation is tougher still, as the adverse effects are indeed considerably more rare.

Are you prepared to allow your daughter to be a guinea pig in what Dr Harper has described as a ‘mass experiment’? Or perhaps you feel that protecting your daughter (but for how long?) from the two common strains of the human papilloma virus (HPV) that result in around 70% of cervical cancers in women makes the risk one worth taking?

In any event, the public need accurate and transparent information about what the actual risks are — and it is apparent that governments and vaccine manufacturers are giving us a picture that is a likely distortion of what is actually already known.