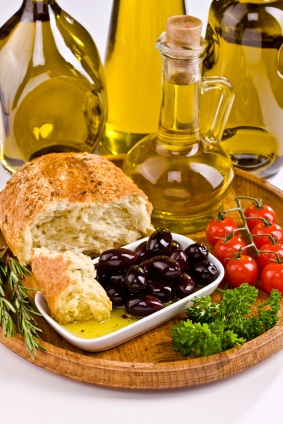 ANH Feature: The Mediterranean Diet—Can It Help You Live Longer?

Matthew Papaconstantinou PhD discusses the advantages of the Mediterranean diet

People who adhere to the principles of the traditional Mediterranean Diet tend to live longer. This is the conclusion of a recent peer-reviewed study by Dr Perez-Lopez and his team from the University of Zaragoza, Spain [1]. The scientists examined all the existing scientific literature on the health benefits of the Mediterranean Diet (MD). Some of the points presented in their report I am discussing below.

The Mediterranean area represents the birthplace of western modern civilisation. In its early days, low fat, high-carbohydrate foods were the typical component of our ancestors' diet.  Greeks would use olives as their main source of fat and believed that animal meat - consumed by the barbarians - was unhealthy food.

During the last 20 years, the popularity of the MD has spread worldwide, due to its link to greater longevity and lower rates of cardiovascular disease, cancer and age-associated cognitive decline. The nutritional model of the MD is based on the traditional diets of some of the countries of the Mediterranean basin, particularly Greece, Southern Italy, Portugal, Cyprus, Spain, and Turkey.

The health benefits of the MD have been documented by a significant number of scientific studies (see references below). Having lived in the Mediterranean area for most of my life, I look at these findings with special interest.  I would like to share this information, hoping that some of you may find it helpful.

A number of studies have shown that people who adhere to the traditional MD have a longer life span. In 1995, the American Association of Retired Persons (AARP) followed up 566,000 of its American members for 10 years with a questionnaire. Those people who reported eating foods closest to the MD showed a 20% less chance of dying of heart disease, cancer or any other cause [2].

Another study, conducted by the European Prospective Investigation into Cancer and Nutrition (EPIC), found that a healthy 60-year-old man who adheres well to the MD can expect to live about one year longer than a man of the same age who does not follow the diet [3].

In an Australian population, 24% of whom were Mediterranean-born, the Mediterranean factor was inversely associated with cardiovascular disease (CVD) and heart-related mortality [4].

The US National Institutes of Health defines metabolic syndrome (METS) as the condition where a person has at least three of the following five risk determinants:

A Spanish study followed 2563 healthy people for 6 years. It was found there was an inverse association between adherence to the MD and the possibility of developing METS [5]. In another study, conducted in Greece, greater consumption of fish, cereals, legumes, vegetables, and fruits was associated with a lower incidence of METS. In contrast, increased consumption of meat and alcohol was associated with a higher likelihood of developing METS [6].

The European Prospective Investigation into Cancer and Nutrition (EPIC) study showed that the MD, and olive oil in particular, reduces arterial blood pressure, both systolic and diastolic. Consumption of olive oil, vegetables, and fruit was inversely linked to blood pressure, while intake of meat products and alcohol was positively associated with arterial pressure [7].

Although the risk for CVD may be high in some people because of genetic factors, it can be greatly reduced by appropriate lifestyle and diet. Elderly people with previous myocardial infraction (MI) who increased their adherence to the MD by two units (adherence to the diet was measured in an arbitrary unit scale), showed an 18% lower overall mortality rate [8].

In their study of 11,323 Italian MI sufferers, Barzi et al. found that those who increased their consumption of fish, fruit, raw and cooked vegetables, and olive oil, presented a lower risk of early death [9]. It appears that the phytochemical components of the MD exert cardioprotective effects.

Obesity can directly cause or be a risk factor for a number of health problems including high blood pressure, joint problems (arthritis), type 2 diabetes, certain types of cancer, breathing difficulties (apnea), psychological problems, cancer, and stroke.

A study carried out in Spain, showed that BMI (Body Mass Index, a measure of obesity based on a person's height and weight) was lower in both men and women who followed the MD [10]. In another study, people with elevated body weight who adhered to the MD experienced benefits for their cardiovascular system; they specifically showed greater insulin sensitivity, lower total cholesterol and lower systolic blood pressure [11].

Mendez et al., who studied 17,238 and 10,589 non-obese women and men aged 29-65 respectively, found that MD adherence helped to prevent weight gain. Those in the study who followed the MD closely had a lower likelihood of gaining weight than the ones who did not [12].

In a study that followed 10,582 men and 15,041 women for almost 8 years, those who increased their MD adherence level by two points, presented a 12% reduction in cancer incidence. The study also showed that consuming more unsaturated fats, such as olive oil alone, cut the cancer risk by 9% [13].  In general, there is an inverse correlation between olive oil consumption and the incidence of colorectal, breast and respiratory tract cancers.

A substantial number of studies showing that fruits and grains may protect against bone breakdown. Appel et al. showed that an increase in daily fruit-and-grain servings from 3.6 to 9.5 causes the body to retain more calcium. Certain fruits and vegetables that have a high antioxidant and vitamin content (vitamin D, vitamin K, folates and β-caroten) have been reported an increase in bone mineral density.  This may explain the low incidence of osteoporosis in Mediterranean countries.

The MD is also rich in legumes, which contain phyto-estrogens. These compounds, which are particularly rich in soy, exhibit bone protective effects and low intakes have been linked to the low-energy fractures observed in Asiatic populations. "Low energy" fractures are so-called by physicians because fractures or breaks occur spontaneously without additional impact, the person typically collapsing on the spot owing to greatly weakened bone structure. While soy is not part of the MD, there are legumes such as lentils, chickpeas, and other beans that are rich in phyto-estrogens.

Why is the Mediterranean Diet So Beneficial?

The MD lifestyle emphasizes mostly consumption of fruits, whole grains, cooked and fresh vegetables and legumes, and a moderate amount of wine, nuts, fish and dairy such as yogurt and cheese. It also includes regular physical exercise and exposure to sunlight (which helps the body to produce vitamin D). Lets look at some of these components in a little more detail.

Olive oil is a natural juice that contains hundreds of fatty and non-fatty micro-components of biological significance, such as mono-unsaturated fatty acids (MUFAs) and carotenes, phenolic compounds and chlorophyll. These components exert heart health benefits and have anti-thrombotic, anti-inflammatory and anti-hypertensive effects.

The antioxidants in fruits and vegetables, such as vitamins and flavonoids, have been shown to be anti-inflammatory, anti-carcinogenic, but also protect against heart disease. [14]. Major benefits are derived from lycopene, a strong antioxidant present in tomatoes, which is an important component of the Mediterranean cuisine. Lycopene protects against hypertension, cancer and the harmful ultra violet sun rays. Interestingly, tomatoes that are home-processed (not industrially-processed), by means of heat applied during cooking, have more available lycopene.

To appreciate the importance of fatty acids in the body, one need only ponder the fact that one-fifth of the dry weight of the human brain consists of fatty acids. Among the fatty acids are the precious Omega-3 DHA fatty acids, which have anti-inflammatory and anti-Alzheimer disease properties. People around the Mediterranean Sea frequently consume sardines and anchovies, which are great sources of omega-3 polyunsaturated fatty acids.

Wine and the French Paradox

Moderate consumption of wine is a characteristic of the MD. Red wine is rich in polyphenols, which are powerful antioxidants and protect against oxidative stress. The beneficial effect of polyphenols is apparent when one considers the French paradox phenomenon. Renaud and de Longeril noticed that moderate consumption of red wine decreases the possibility of coronary heart disease, even if wine is part of a diet rich in saturated fats, like those found in meat. Although the French paradox has been debated, the fact that resveratrol, a component found in the skin of red grapes, can reduce the effects of aging, is greatly supported by many studies.

The health benefits of nuts are well established. They are rich in mono- and poly-unsaturated fatty acids and rich in arginine, an amino acid that has cardio-protective effects. Interestingly, although nuts are high in fat, there is little or no weight change in individuals who include large quantities in their diet [15]. This is due to their high satiety property leading to compensatory responses that account for 65-75% of the energy they provide. In addition, nuts have poor 'bio-accessibility', which limits the energy absorbed in the gastrointestinal tract. This offsets much of the "extra" calories provided by nuts.

As Dr Perez-Lopez explains, it is the overall dietary pattern of the MD that promotes longevity. You cannot expect to gain any benefits just by adding plenty of olive oil to an unhealthy diet. This would only increase your calorie intake and the numbers you see on the scale. On the other hand, if you adhere to the MD, your chance of dying is lowered by 20% over a 10-year period than if you are not on this diet, regardless of your age, weight or gender [16].

The traditional MD can still be found in the most deprived areas of Greece, Italy and Spain. However, there are no geographical limitations when following this lifestyle, since most of its dietary components are located not further than your local grocery store.

Matthew Papas, PhD was born and raised in Greece and has experienced the benefits of the traditional Mediterranean Diet first hand. As a biochemist at Washington University Matthew is enthusiastic about all that is happening in research related to longevity and rejuvenation. In his spare time, Matthew enjoys writing articles about healthy diets.