Around 5,000 practitioners, manufacturers, distributors and interested consumers converged on the Palace Grounds in Bengaluru, India last week.  Progressing the mission of “Ayurveda for All”, the biannual 4th World Ayurveda Congress (4th WAC) hosted an impressive and comprehensive range of keynote and plenary sessions relating to the philosophy of Ayurveda.

While much of the meeting focused on recent progress on the scientific validation and development of Ayurveda, an additional and important strand running through the meeting was the ‘globalisation’ of Ayurveda. This included detailed exploration of both the opportunities and the challenges facing Ayurveda outside its native heartland in the Indian subcontinent. It was in this latter context that ANH-Intl executive and scientific director, Dr Robert Verkerk, was invited to give one of the keynote lectures. 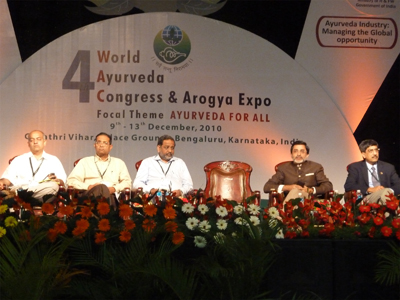 The word Ayurveda is made up from two Sanskrit words—‘ayus’ meaning life and ‘veda’ meaning knowledge or science.  Simply put, Ayurveda can be described as the ‘science or knowledge of life’, which the early scholars understood to comprise the mind, body, senses and soul.  A view which is little changed today.  Professor Savrikar from Podar Medical College in Mumbai agreed that “unless a person is very happy mentally we can’t say he’s healthy”.  Hence it is not simply a traditional system of medicine, but more a complete philosophy for life.  Ayurveda encompasses a wide range of modalities including yoga, meditation, nutrition, detoxification, massage and the use of herb and mineral preparations.  The fundamentals of Ayurveda were laid down in Vedic scripts, the earliest of which, the Rig Veda, dates back 6,000 years and contains a number of ‘prescriptions’ to help overcome various ailments.  The aim of Ayurveda is to promote health and prolong life and in so doing eliminate disease and dysfunction.  The key to success involves focusing more on prevention, rather than cure, and by restoring and maintaining balance of body, mind and spirit.

Sadly in the West this body/mind/spirit balance is poorly understood by government regulators and allopathy in general.  So too are traditional medicinal cultures that are not purely concerned with the treatment and cure of disease.  The result being a situation such as the one in Europe, where this valuable tradition is being ripped apart into its component parts, legislated by different laws and inappropriately judged against the same pharmaceutical standards used for new-to-nature drugs.  Western medicine and pharmaceuticals have been around for a relative split-second in time compared to ancient traditions such as Ayurveda and Traditional Chinese Medicine.

The arrogance and ignorance that appears to be shown by the European Commission and EU Member State regulators is one of the greatest travesties of our time, earning Europe the label “the dark continent for Ayurveda” by Dr Prasad from Himalaya Herbal Healthcare.  To decimate these traditions, to uphold wrongly that there is no scientific basis to their effectiveness and then to deny innovation (i.e. their continued development) is to deprive European citizens of a fundamental and basic right to health and freedom of choice.  Let alone maintain the vast tradition for future generations in Europe, one that is so well established to counter to massive burden of chronic disease which allopathic medicine is barely denting.

In India, where there is exponential growth in the generic pharmaceutical industry, there is still great confidence in the national tradition of Ayurveda.  Faced with 30 million diabetics, 100 million with cardiovascular disease and 30% of children being born of low birth weight, figures set to increase alarmingly by 2030, Ayurveda offers a low-cost, health-for-all solution.  This rapid growth in chronic diseases can be attributed largely to the substitution of traditional diets and lifestyles with western ones. Academics and Ayurvedic physicians are working together to re-instate a sustainable healthcare system that empowers the individual and is affordable for all.  Despite the number of pharma companies lured to India by the promise of cheap labour and reduced overheads, western medicine will never be in a position to offer both a healthcare system and a viable economy for the people.  In contrast, Ayurveda is not just a disease management system, but a way of life that promotes health, empowers the mind and spirit and, through herbal cultivation, offers financial sustainability too.

Despite gilding the bitter European regulatory lily in the colours of consumer protection, it’s clear that we’re again dealing with profits over people.  We hope you’ll take action to safeguard our traditional systems of medicine and join the campaign.

Dr Robert Verkerk, chaired and gave the keynote address in the first of two sessions entitled ‘Globalisation of Ayurveda and IPR’.  His presentation outlined the current challenges facing on Ayurveda through impending legislation in Europe.  The Traditional Herbal Medicinal Products Directive (THMPD) poses a significant hurdle for many manufactured products from traditional herbal medicinal disciplines. 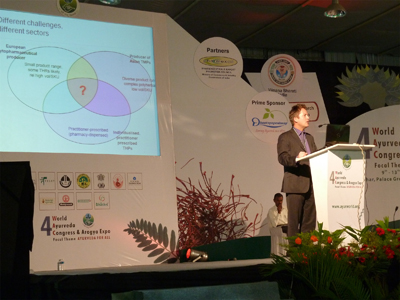 Similar sentiments were echoed amongst the visiting dignitaries, doctors and academics to the Congress.  A selection of which follow:

“Prevention is better than cure”

“We have a habit of running with short-term solutions.  We need to look for long-term solutions. Ayurveda is here to stay.  We have a bright future for Indian medicine in India and the rest of the World”

Dr Verkerk appealed to the large audience to become proactive. In communicating his concern over the slowness of response by practitioners and companies involved in the Europe, he made an analogy: He said that it seemed many were sitting on deck chairs admiring the wonders of the ocean, and even after hearing that a tidal wave was due, they still sat enjoying their comfort.

Key connections were made and it seems that most leading players were still not ready to face the reality that is being presented to Ayurvedic suppliers and non-medical practitioners in Europe. Conversely, it was also clear that a few high ranked officials were very aware of the problems and were keen to see all avenues followed to help allow Ayurveda to flourish in Europe, as well as elsewhere in the world.

The 4th WAC was preceded by a 2-day International Delegates Assembly (IDA), held at His Holiness Sri Sri Ravishankar Ji’s ashram—the Art of Living Foundation—on the Kanakpura road outside Bengaluru. 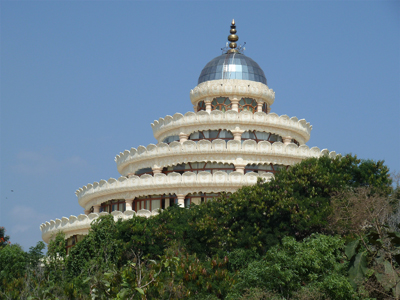 The IDA was hosted by the Indian government Department of AYUSH (Ayurveda, Unani, Siddha and Homeopathy), and was opened by Dr SK Sharma, advisor to AYUSH.  There are now 260 Ayurvedic medical colleges offering degrees and post-graduate courses in India to 15,000 students.  Traditionally trained doctors number 7.5 million, their practices being served by 10,000 manufacturing units.  After 4 years of debate with the European Commission over the THMPD, the Indian Government has made little headway.  With full implementation due in May 2011, Dr Sharma argued that this legislation “is not of a scientific nature, but of a trade and political nature”.

Along with around 200 invited international delegates, Dr Rob Verkerk along with Meleni Aldridge, executive coordinator, attended on behalf of ANH-Intl.  Under the theme of ‘global recognition of Ayurveda’ dignatories and delegates outlined the advances in the practice, teaching and awareness of Ayurveda from different parts of the world.  Unfortunately, there still seem to be many in the global Ayurvedic community still unaware of the travesty taking place in Europe.  Rob Verkerk’s presentation entitled “Why urgent regulatory change is needed in Europe to safeguard the future of Ayurveda” sought to change that. 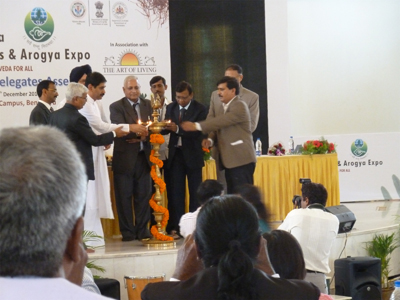 Further discussions focussed on the dissemination of Ayurveda globally.  Passion for this ancient holistic, lifestyle approach, that is so much more than a system of medicine, was palpable throughout.  It was refreshing to be amongst such positivity and enthusiasm and in such a tranquil setting as the Art of Living Foundation.  His Holiness Sri Sri Ravi Shankar welcomed the delegates and described how Ayurveda was again becoming central to their work in the poorest communities in India.  Volunteers from the Foundation have initiated a programme of teaching the necessary skills needed to help villagers to once again grow traditional herbal plants.  He urged us all to follow this lead internationally to safeguard the vulnerable traditional botanical species, which are most at risk of extinction through over collection.  This simple, cost-effective and sustainable strategy is proving very successful in reducing drug and alcohol addiction and improving health in the villages. 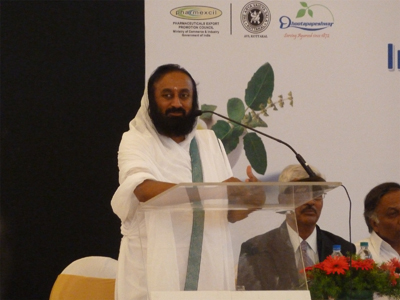 International delegates and government officials alike shared their personal journeys and experiences of Ayurveda.  Common to all was the immeasurable respect and inherent responsibility synonymous with accepting guardianship of such a precious and ancient philosophy.  That European legislation, in its arrogance and ignorance, may signal an end to traditional medicinal cultures is something we all need to take responsibility for preventing.  Even as western healthcare systems buckle under the spiralling costs of drug-based allopathy, governments, strongly lobbied by pharma cartels, are set to severely handicap our access to preventative healthcare—unless we stand up for our rights.  As Dr Gerry Bodekar, from the department of Medical Sciences, Oxford University reminded us, “there’s nothing alternative about so-called alternative medicine.  Modern medicine could be considered alternative in some parts of the world”. 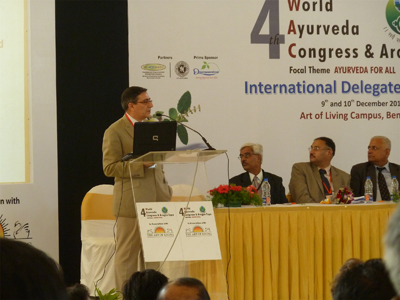 Without widespread civil action, even disobedience, we are in danger, particularly in Europe, of losing the last vestiges of control over our own health.  A diseased society equals increased profits for the drug industry.  Disease prevention through complementary and alternative medicine is bad for business.  An oft-repeated phrase during the 4th WAC was that there will be no need for treatment if you use and live the principles of Ayurveda.  Health prevention is sustainable—treatment based on western drug-based medicine is not.  The stranglehold that has developed by large corporations over our healthcare, food and energy industries must be broken.  Our health is a basic birthright and traditional medicinal cultures like Ayurveda, Unani, Traditional Chinese Medicine, etc have a huge amount to offer.  At the very least, the choice should be ours.

To avoid becoming another sacrificial lamb on the altar of Big Pharma profits, and to become an active participant in safeguarding the future of traditional herbal medicine in Europe, visit our THMPD campaign.