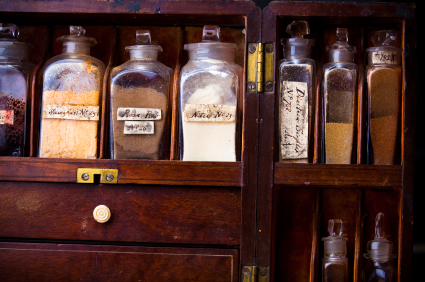 Bailiffs acting for Plymouth City Council have seized all the protected assets of one of the country’s foremost medical history charities, Park Pharmacy Trust. The seizure results from unjustified legal costs generated by the Council in a fight over development in a public park. The Council may now decide to put the assets in storage or hold an on-site public auction. This appears to be a petty and spiteful vendetta on the Council’s part that will break up a unique collection of worldwide importance, and deprive the community of the Trust’s award-winning activities.

Today, the Alliance for Natural Health International and Park Pharmacy Trust launch a campaign to save the Trust and the important contribution it makes to the local community and to our medical heritage.

The Trust’s headquarters at Thorn Park Lodge house its valuable collection: a pharmaceutical library, sets of unique prescription books, collections of Materia Medica – used in the past for making medicines – and an extensive collection of artefacts and old-fashioned proprietary goods. A medicinal herb garden, built over many years by volunteers at Thorn Park Lodge, allows visitors to learn the medicinal uses of some important plants or just enjoy its tranquil charm.

Park Pharmacy Trust’s problems stem from a complex wrangle over planning permission. The Trust prevented Plymouth City Council from bulldozing its medicinal herb garden, but lost a judicial review over the original planning decision and has been saddled with a bill of £71,493. Over £46,000 of this cost represents interest and profit for Plymouth Council’s legal department.

Dr Jan Knight, Chairman of Park Pharmacy Trust, said today: “We are really hoping that Plymouth City Council will come to its senses and realise the short-sightedness and long-term costs of its actions.In our attempt to defend this unique part of our national heritage from developers, we have been forced to go to court and rack up wholly unfair costs that we cannot afford. Now that the Council has seized our assets, it appears determined to make as much money as it can by selling them item-by-item. We think this is a grotesque and opportunistic act of vandalism.”

At Thorn Park Lodge, the Trust provides thousands of visitors with a fascinating educational experience, including learningforgotten skills like pill-rolling and powder envelope folding. The Trust provides hands-on educational workshops to support the schools’ curriculum, while working with the elderly, Alzheimer’s patients and people recovering from strokes. According to the head teacher of Hyde Park Infants School, “We can’t lose you, you are part of the community and moreover, you are embedded in our curriculum”.

Emphasizing the importance of Park Pharmacy Trust to the UK’s national heritage, the Trust was also overall winner in the BBC’s It’s My City competition in the category of heritage and tourism.

Dr Robert Verkerk, Executive & Scientific Director of ANH-Intl, said of the campaign: “The Trustees of Park Pharmacy Trust have done everything humanly possible to protect this vital resource and piece of British medical history. With the organisation and its collection only moments away from possible extinction, the only hope now is for outside pressure to bring the Council to its senses. We call on the public to flood Plymouth City Council with letters and emails to ensure they save the Trust.”

We urge you to write or otherwise contact Plymouth City Council to express your dismay at their wanton destruction of our nation’s medical heritage. If they receive enough complaints, they will be forced to think again about their actions regarding Park Pharmacy Trust. Although we are sure we don’t have to, ANH-Intl and Park Pharmacy Trust remind you to be polite and reasonable in all communications with Plymouth City Council.

What does the Trust do and what do people think about it?

The Planning Issue that has created the debt