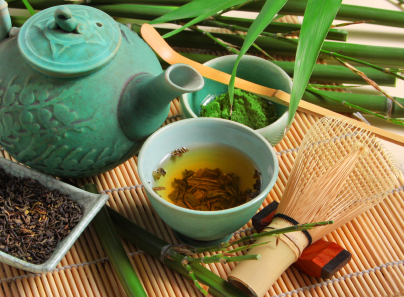 Green tea: it’s a health gem, isn’t it?  Tasty, low in caffeine, high in the antioxidant polyphenol epigallocatechin gallate (EGCG), and rich in carotenoids, tocopherols, vitamin C, chromium, manganese, selenium, zinc and more.  But of course, it’s also so much more.  Green tea is an extremely valuable tool that can help modern, Western society deal with the type II diabetes/obesity/metabolic syndrome crisis, one of the biggest, new, fertile plains over which the pharmaceutical industry dearly wants sole rights.

More and more humans have been experiencing the benefits of green tea.   Enter ‘green tea’ in the medical reference search engine PubMed and you get 4332 references as of today. Not surprising, then, that concentrated green tea extracts are some of the most popular food supplements on the shelves, while also being under the regulatory spotlight. Now, France has become the first European Union (EU) Member State to ‘ban’ the use of therapeutic quantities of green tea. This is not a good thing and represents another part of the tip of a very unsavoury iceberg – one that demands action.

Enter the French government’s General Directorate for Competition Policy, Consumer Affairs and Fraud Control (DGCCRF).  Back in 2003, the DGCCRF along with Spanish authorities refused pre-market authorisation for a green tea extract named Exolise, following 13 reports of liver toxicity.  At the time, the French authorities, in the form of the Health Products Safety Agency (AFSSAPS), stated that its decision related only to, “A speciality whose mode of preparation is particular (extracted strong hydro-alcoholic from sheets of green tea)”.  Furthermore, “[The decision] does not apply to the other drugs made up of green tea (extracted weak hydro-alcoholic, aqueous extract and powder of sheet) authorized in France. It does not call in question the traditional use of green tea in phytotherapy or in food.”  The manufacturer removed the product voluntarily from the French and Spanish markets, and “extracted strong hydro-alcoholic” preparations of green tea have remained effectively illegal in France ever since.

Eight years later and the DGCCRF decided to take another look at the situation.  Fortunately for the French population, their bureaucrats are as tender-hearted as they are incisively competent: for the DGCCRF has opted to maintain its ban-in-all-but-name on these ‘deadly’ food supplements, meaning that that it must have been right in the first place.  In fact, it has chosen to reaffirm its belief in the original judgment by extending the prohibition to weak hydro-alcoholic extracts and green tea powders.   In doing so, it cited several lines of evidence:

To view this decision in the most charitable light we are able to muster, the French authorities are applying the precautionary principle over-enthusiastically and inappropriately, by refusing market authorisation to green tea extracts based on utterly inconclusive evidence.   French green tea – and health – lovers will be devastated to learn that the effective ban extends to matcha, the finely milled Japanese green tea that contains high levels of EGCG, chlorophyll and antioxidants.  At present, the only form of green tea authorised for sale in France is an aqueous extract, otherwise known as ‘a cup of green tea’.

But many of you will be aware that the sheer inability of EFSA to evaluate scientific evidence in the field of nutrition further complicates government decisions, because EFSA does not recognise any health benefits of green tea.  This, along with the other 95% of botanicals for which EFSA has rejected evidence of benefit, is nothing short of a travesty, one that we’ll explore further at a meeting with EFSA on 12th October.

Questions for the French authorities

We think the attitude of the DGCCRF toward green tea extracts is outrageously restrictive, and may contravene existing EU case law.  We believe it comes at a time when decisions like this provide another obstacle in the path of those who want to manage their own health, by reducing their risk of metabolic syndrome and other debilitating chronic conditions that represent some of the greatest burdens on Western healthcare systems.  In essence, we will pose the following questions to the French authorities and have every intention of incorporating the French government’s response into our herbal legal challenge, which is in the late stages of preparation. The bottom-line questions are:

Once again, we see Member State ‘competent’ authorities going, in our view, beyond their legal remit to remove products from the market based on inadequate evidence, while ignoring the relevant European case law on the topic.  We urge our French followers to write to the DGCCRF objecting to its absurd decision – use the above questions if you like, or come up with your own!  Please forward to us any responses you receive, as they may be of use in our legal challenge.