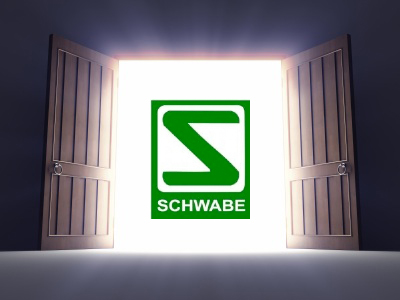 ANH shines the light and asks who is behind the campaign and what is its ultimate goal?

Last week’s story, in which we leaked a letter from the Reading University academic Professor Elizabeth Williamson to the UK Health Minister, has certainly attracted plenty of interest, even if we have yet to receive a direct reply from the Professor herself. Her letter displayed in our view a fundamental and woeful misunderstanding of the European herbal Directive and appeared designed to trigger a further regulatory clampdown on so-called botanical food supplements. Our biggest problem with Prof Williamson’s letter wasn’t so much the secrecy or even its ignorance, but rather its intent. The consumer was set to be the main loser, along with a long list of highly responsible herbal manufacturers, suppliers and distributors who happen to sell their herbal products as foods, rather than as medicines. It would also create great difficulties for herbal products used as part of some of the longest-lived healthcare traditions, namely Ayurveda and traditional Chinese medicine (TCM).

But it looks like Prof Williamson’s letter was only the tip of the iceberg. Today, ANH-Leaks brings you news of a very strange – and ominous – campaign, one that appears directly related to the mistaken concerns that Prof Williamson expressed to the UK Health Minister. Just like the Professor, ‘The Safer Herbal Medicines Campaign’ (SHMC) urges the UK government, in the form of the Medicines and Healthcare products Regulatory Agency (MHRA), to crack down hard on botanical food supplements while painting a grossly distorted picture of their public health risks. And, just like Professor Williamson’s communication, this campaign is being waged entirely out of the public eye.

The SHMC calls itself a campaign, but it seems to us it’s actually more of a pseudo-campaign, since it bypasses the usual target of a consciousness-raising exercise – the public. Instead, it goes straight for Members of both Houses of the UK Parliament. In fact, the SHMC must have gone to some length to keep itself under the radar, at least until now. Try it for yourself: put “Safer Herbal Medicines Campaign” into any search engine, in quotation marks to make sure you’re looking for the entire phrase, and see what comes up. Nothing at all! There’s no website to accompany the campaign and explain its aims, no records of any SHMC press releases and no information about who’s running the campaign.

We’re sure this is merely an oversight on the part of the SHMC, so we’ve decided to help them out!  No need to thank us, guys – ANH-Leaks is delighted to do both the Campaign and the public a favour, by plugging a few spotlights into our portable generator and shining a light on the SHMC’s activities.

Another leaked document — and startling similarities

ANH-Leaks has come into possession of the SHMC’s ‘Briefing Note for MPs [Members of Parliament] and Peers’. There appear to be remarkable similarities between this document and Professor Williamson’s letter to the UK Health Minister – coincidence enough in itself. To illustrate this, in Table 1 below, we have chosen several phrases from the good Professor’s letter and compared them with wording from the SHMC briefing note. Don’t forget that both documents were sent to UK lawmakers with no attempt to inform the public, let alone the companies who might be affected if the UK government decides to act upon the letters’ concerns.

When actions are carried out in secret for obscure ends, the obvious question is: why? And while the question may be obvious, the answer rarely is. After all, there isn’t much point in doing things in secret if one’s intentions and reasoning are written across the sky. Usually, the best way to begin such an investigation is to ask another question: who benefits? Who would benefit if the SHMC got its way, and the UK government put yet further restrictions on the availability of botanical food supplements?

Standing to gain the most from a regulatory clampdown on botanicals, we propose, are the largely German phytopharmaceutical companies who have spent huge wads of cash on registering their products under the herbal Directive. They presumably thought they’d got the market stitched up when the Directive came into force, for several reasons – prime among them being that they were among relatively few who could afford the so-called Traditional Herbal Registrations (THRs). Many of their competitors simply couldn’t stretch to the cost, or at least would not be able to get a meaningful proportion of their very large ranges of herbal products registered. It’s worth pondering that a typical Ayurvedic and TCM herb chest is comprised of a few hundred formulations, not just 10 or 20. In addition, phytopharm companies no doubt find it highly convenient that the Directive more or less makes their products – generally comprised of highly purified herbal extracts, stabilised in a pharmaceutical, polymer base – the only game in town.

Back in February 2011, our own analysis of UK registrations revealed that only 10% of products with THRs contained whole plant material. Botanical food supplements, by contrast, are generally based on whole plant material. Since they are also often polyherbal, they frequently benefit from synergy of the multiple active constituents and cofactors present. Ironically, this is an area in which Prof Williamson has a demonstrated interest.

Funnily enough, we aren’t just whistling in the wind here. Cast your minds back to July 2011, when the College of Medicine held a symposium entitled Putting Herbal Medicine Into Practice. One of the speakers was Dr Dick Middleton, Technical Director at Schwabe Pharma (UK), a prime mover in the phytopharm sector. When placed next to the relevant text from Prof Williamson’s letter and the SHMC document [Table 1], we think you’ll agree that there is a remarkable level of agreement between the statements made.

The Safer Herbal Medicines Campaign (a)

“Those responsible [companies] who were encouraged by the MHRA to invest heavily in complying with the new Directive...”

“The responsible part of the industry...wants to engage in the sale of high-quality herbal medicines”

“The intention of a new Directive, spearheaded by the UK, was to support the responsible manufacturing sector in setting standards in a notoriously unregulated market”

[The MHRA believed that the herbal Directive] “….would lead to the responsible manufacture of herbal products in a notoriously unregulated market”

"All these unlicensed herbal medicines...could be submitted to the MHRA for registration...[the herbal Directive represents] a tremendous step forward for public safety in the UK”

“If the new measures fail, the public will be in a worse position than before, exposed to unregulated and poor-quality herbal products with demonstrated health risks and inadequate information”

"If this practice continues, poor-quality herbal products with demonstrable health risks and inadequate safety information will continue to be sold in the UK”

“It has become apparent in recent months that some manufacturers of herbal medicines are simply ignoring the Directive and are continuing to sell their products unlicensed, often by reclassifying their products as food supplements”

A lot of companies have said: “Ooh, well we were selling as unlicensed herbal medicines, but I know what! We'll put 'Food Supplement' on the label and we'll sell it as a food supplement!”

(a) From ‘Briefing Note for MPs and Peers, The Safer Herbal Medicines Campaign’


(b) Extracts from letter to UK Health Minister, Andrew Lansley

(c) Verbatim quotes made at Putting Herbal Medicine Into Practice conference at the College of Medicine, July 2011

We could add more, but we think the table above makes the point forcefully enough.  It seemed highly likely to us that Dr Dick Middleton of Schwabe Pharma was driving the ‘The Safer Herbal Medicines Campaign’. The primary motive of the campaign? To pressurise the MHRA into assisting the company to reduce competition and increasing its return on its investment in herbal registrations.  While our supposition turned out to be right, we only got direct evidence for this yesterday, as you’ll read below. 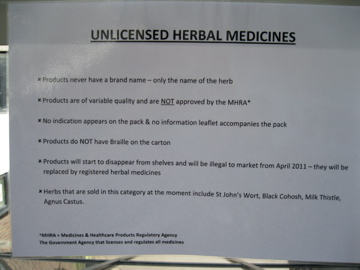 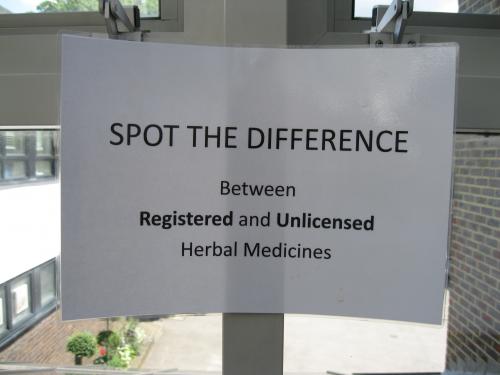 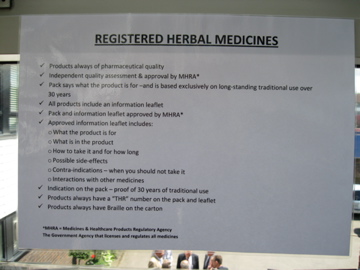 Unlicensed and licensed herbal medicines, according to Schwabe Pharma's stand at the Putting Herbal Medicine into Practice symposium

Apart from the correlations we revealed in Table 1, there was still no smoking gun proving that Schwabe was the prime mover behind the Safer Herbal Medicines Campaign.  But yesterday, one of the members of our team, in his or her private capacity, was lucky enough to speak to the 'Scretariat of the Campaign' at Insight Public Affairs, as named on the SHMC briefing note. Insight PA, it seems are the company ‘looking after’ the SHMC show. A glance at the client list of Insight PA reveals a veritable hoard of major pharmaceutical interests, including Pfizer, Bayer, Boehringer Ingelheim, Sanofi, Leo Pharma, Lloyds Pharmacy, Bristol Myers Squibb and the Proprietary Association of Great Britain (PAGB), the over-the-counter medicines trade association.  And one more thing, before we forget: also among these big names was Schwabe Pharma.

Coming back to our conversation with Insight PA yesterday, this is what we were told:

And what of Prof Williamson? Is it possible that she could have been co-opted into Dr Middleton’s plan? This we don’t know for sure, but the circumstantial evidence we’ve pieced together thus far would make this a very high possibility. It is a gold-plated fact that pharma companies pay medical doctors big money to effectively endorse their products through various strategies. A favourite technique is that of the ‘key opinion leader’ or KOL, where a highly respected doctor agrees to speak publicly about drug X, act as lead investigator on the company’s trials, become an author on published academic papers about the drug, etc. Does the circumstantial evidence that we have gathered indicate that Professor Williamson may be a KOL of sorts for Schwabe Pharma – and would this well-respected academic really be willing to risk a 30-year career on endorsing a deceptive campaign that hides a vicious desire for market monopoly behind a mask of concern for public safety?  Or did she just by chance have views on the EU herbal Directive and herbal food supplements that more or less completely match those of Dr Dick Middleton from Schwabe Pharma – and the Safer Herbal Medicines Campaign?

The entire premise of the SHMC campaign appears to be built on misinformation and misinterpretation of the herbal Directive. The Directive does not give the MHRA power to interfere in products regulated by food law, such as botanical food supplements. There is also little evidence for the fact that herbal products pose a significant risk to public health; they are among the safest products we consume, being many time safer, on average, than conventional foods. The Directive, in contrast to the view expressed by the SMHC and Prof Williamson, is not mandatory for all herbal medicines, let alone all herbal products.  But, here’s an unassailable fact: if the SHMC succeeds, it will give companies like Schwabe an enormous competitive advantage.  No doubt as per the plan.

So far, the only public response to this seemingly devious campaign that we have been able to find has come from the UK’s national association of health food manufacturers, the Health Food Manufacturers’ Association (HFMA).  In the latest (December 2011) edition of the health store rag, Health Food Business, the HFMA appears to endorse the SHMC. Since the HFMA’s membership includes both phytopharm companies and smaller herbal manufacturers, it is unquestionably in a rather compromised position, but it’s a shame to see that the interests of smaller companies are so often given the lowest priority.