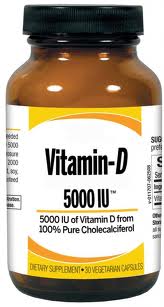 The UK Chief Medical Officer is being forced to educate medical health professionals about the importance of Vitamin D supplementation after Vitamin D deficiency has been blamed for the recent deaths of at least 2 children in the UK. BBC news coverage has highlighted that Vitamin D deficiency is considered to be ‘a contributing’ factor in the deaths of a further 30 children. Given that the recommendation is for a mere 400 IU (10 mcg) for under 5’s and some adults, is it a case of too little too late? The UK is lagging behind the USA and Canada in recommending vulnerable groups to supplement with Vitamin D, so it’s no surprise we’re seeing such acute problems.

Worldwide, cases of rickets have been rising for sometime, with risks being even greater for dark-skinned people or those who habitually cover their bodies for religious reasons, given that vitamin D production in such people is compromised. UK orthopaedic clinics have been reporting at least one serious case per month. But this represents the ‘tip of the iceberg’ in the obviously wider context of less acute, but still serious conditions that can arise from Vitamin D deficiency and related hypocalcaemia (low blood calcium levels). Hypocalcaemia can also cause seizures, and breathing difficulties.

Government reports tend to only focus on the vitamin D/calcium link. However, vitamin D experts such as Reinhold Veith PhD and Michael Holick MD have been researching the huge costs to society of ignoring much more concerted action on vitamin D and health for literally decades! Vitamin D deficiency is also linked to a plethora of other health problems including, osteoporosis, muscle weakness, high blood pressure, diabetes, autoimmune problems, obesity and some cancers.

Blood levels of Vitamin D are naturally maintained by exposure of the skin to sunlight. This means that increasing sun avoidance (and high-SPF sunscreens) is a huge factor in declining blood levels of Vitamin D. Widespread media warnings, usually promoted by skin cancer specialists or sunscreen companies, have caused many to literally fear the sun. But it’s crucial to recognise that short (15-20 minute) exposures (of about 80% of the body area) that don’t burn the skin are vitally important to health. Many have mistakenly learned to believe that it’s the sun exposure itself, rather than the act of getting sunburned, that causes skin cancer.

Recommending regular bouts of sun exposure is of course sensible during the summer months, but in temperate latitudes, the angle of the sun is just too low to generate any significant vitamin D production in the skin, even if you felt the desire to expose yourself!

The gap between guidelines and practice

UK Government guidelines recommend taking 400 IU per day of Vitamin D for pregnant and breastfeeding mothers and for children between the age of 6 months and five years old, who are not already obtaining supplemental vitamin D from formula milk. Whilst 400 IU is an appropriate dose for an infant, it doesn’t go anywhere near what an older child or adult would need. In terms of comparison, a caucasian sitting in the sun with arms and legs exposed for 20 mins would make the equivalent of around 10,000 IU of vitamin D3 if taken orally. It’s been well documented that in the absence of any sun exposure, at least 1,000 IU of vitamin D3 a day is necessary to maintain healthy levels in the blood. Carol Wagner MD advocates at least 100 mcg (4,000 IU) daily for all pregnant woman, a level that many interested in preventative healthcare take on a daily basis. See Vitamin D Council recommendations for different population groups.

A survey conducted by the UK Feeding for Life Foundation (FfLF), shows just how big the gap is between the published research and practice. When the report was published in October 2011, 51% of healthcare professionals were either not sure or were unaware of the supplementation recommendations, while 73% agreed they didn’t have enough training about the benefits of supplementation. Let’s hope the widespread media reports of recent days have reached more healthcare professionals. We are by no means out of the woods here in the UK!

Sadly, the recommendations include no advice on the best form of the vitamin to take. Evidence shows that vitamin D3 (cholecalciferol), the form that is made naturally in the skin and found in good quality supplements, is consistently superior in its effect as compared with vitamin D2 (ergocalciferol). Ergocalciferol is commonly included in prescription medicines or inferior supplements. The difference in the two forms was recently confirmed in a meta-analysis (study of studies).

The Feeding for Life Foundation tells us that 74% of UK parents are also unaware of the Health Department’s recommendations for vitamin D supplementation. Not surprising when so much has been spent on the mass media misinformation campaigns about food supplements.  It’s hammered home that vitamin supplements are ‘dangerous’ and unnecessary as you can get all you need from a balanced diet. Then suddenly, parents find out that they should have been supplementing with vitamin D all along.

In the 21st century, with everything that has been learned about the seminal importance of vitamin D, it is criminally negligent that the deaths of these children and the distress suffered by their families could have been prevented by something as simple as taking a daily vitamin D3 supplement. Lesson learned? Time will tell.