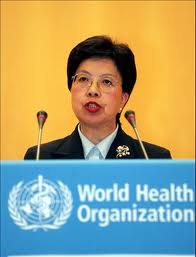 Dr Margaret Chan, the incumbent Director-General of the World Health Organization (WHO), who bows out from her position this June, has been on the road plugging the WHO’s new book, The emerging threat of antimicrobial resistance – options for action. Amid Chan’s dire warnings that antimicrobial drug resistance could spell “…the end of modern medicine as we know it,” we recall that she is the disinformation specialist par excellence who was the figurehead for the swine flu ‘pandemic-that-never-was’. So is there another agenda here?

March of the microbes

Chan is correct in our view to say that the modern era of pharmaceutical-led medicine is drawing to a close. This surely has to be a good thing when you weigh up the cost-efficacy-risk equation! Chan and the WHO report also have a point when it comes to antimicrobial resistance. As the book points out, microbes ranging from common bacteria – like the Staphylococcus aureus responsible for everything from skin infections to pneumonia, or the Escherichia coli commonly responsible for food poisoning – to malarial parasites and tuberculosis have developed resistance to drug treatment. Bearing in mind the fairly mainstream twin concepts of evolution and adaptation, such a consequence was both inevitable and predictable, to everyone except orthodox medicine at least.

“Things as common as strep throat or a child’s scratched knee could once again kill,” said Chan, as though swathes of children were dropping dead prior to the antibiotic age each time they tripped on rough ground and broke open their skin. Looked at with Chan’s apparent point of view, the world’s a terrifying, hostile place, isn’t it? And just WHO are you gonna call to protect you?

Why, Chan’s WHO and her Big Pharma cronies, of course!  “With an inexorable increase in antimicrobial-resistant infections,” begins Chapter 6 of the WHO book, “A dearth of new antibiotics in the pipeline and little incentive for industry to invest in research and development”, further innovation is a must. Innovation, that is, in terms of, “Scientific collaboration, funding mechanisms and regulatory provisions,” particularly, “Drug discovery, vaccine development and diagnostics”.

And so, behold Chan’s agenda: manipulate the tame media to terrify populations and governments into believing that the only solution to an impending drug-free doom is, er, to throw further billions at more drugs and vaccines.

Of course, Nature holds the key to rational prevention and treatment of microbial disease. Simple strategies, from a healthy, organic diet (where possible) to sufficient high-quality sleep – which serve to strengthen the body’s own defences – would drastically reduce the incidence of microbial disease, whether in the industrialised or developing worlds. And, ironically enough, ANH-Intl developed a comprehensive report for an earlier incarnation of the WHO, in which we pointed out that widely available, cheap and easily distributed natural substances like vitamin C, zinc, silver and garlic are often can be more effective in managing pathogens than drugs.  Such non-pharmaceutical immune enhancement recommendations are screaming omissions from the WHO’s book.

From a scientific point of view, the microbial theory of disease possesses numerous and significant flaws. A more rational recommendation from the WHO would be for massive investment in research to develop the groundbreaking work of Antoine Béchamp, largely forgotten in favour of Louis Pasteur’s simpler germ theory of disease.

The stink of crony capitalism

Chan appears merely to be following the script of making recommendations that benefit big business at the expense of the world’s population. In this, she is joined by governments everywhere, this week’s shining example being the UK government. After announcing a billion-pound partnership with Big Pharma at the end of 2011, the UK Chancellor of the Exchequer ‘coincidentally’ announced tax cuts for big business the day before GlaxoSmithKline confirmed a £500 million investment in the country. So UK and other citizens of the world get yet more poisonous, largely ineffective drugs foisted upon them, while their makers pay less tax into the UK economy than ever before.

Chan’s empty, cynical posturing makes it clearer than ever that the choice of our age is between fear and freedom. In this case, it is fear of a world where drugs are our only defense against a myriad killer bugs, or the freedom of recognising that supranational organisations like the WHO have agendas that aren’t in our interests. Choose the latter, and things like how to manage one’s own health suddenly become so much clearer.