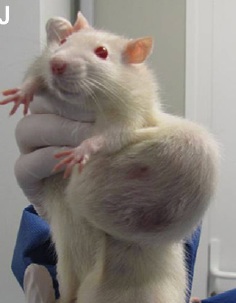 ANH investigates the controversial rat study and its implications

Those with concerns over or interests in genetically modified (GM) crops will still be reeling from the news released last week about a long-term study on rats to evaluate Monsanto’s herbicide-resistant GM maize (corn), along with its companion herbicide Roundup (glyphosate).  The French and Italian researchers at the University of Caen discovered that typical levels of exposure to GM maize and Roundup caused cancer and premature death.

For those of us with long-standing concerns about the safety of GM crops, is this the study we’ve been waiting for – one that finally exposes GM crops for what they are?  Or do we need to be cautious in how we interpret the results?  And what about the flurry of criticism the study has created, especially from pro-GM quarters?

Why is the study important?

At the outset, it’s vital to note that this was the first-ever lifetime animal feeding study [1] of Monsanto’s GM maize and Roundup, the world’s most widely used herbicide.  Prior studies – many carried out or funded by the products’ manufacturers – have only looked at the effects of 90 days’ ingestion.  If we assume that humans live for an average 75 years and that rats live for 2 years, a 90-day rat feeding experiment is equivalent to less than 10 years of a human lifespan!  Once approved for public sale, many people will eat GM food every day of their lives, and it’s a shocking comment on the corruption within the GM sector that lifetime animal feeding studies are not the norm prior to approval.

The paper that has sparked controversy about the safety of Monsanto’s GM maize and the world’s most widely used herbicide, Roundup

What does the study say?

The authors compared the effects of feeding rats with Monsanto’s hybrid, ‘Roundup Ready’ GM corn, named NK-603 – cultivated with and without Roundup – and normal, non-GM corn.  They also studied how Roundup alone affected the rats, by adding it to their drinking water.  In all cases, the authors were careful to use levels of the GMO corn and Roundup that were well below legal, supposedly ‘safe’ limits of exposure.

At the end of the 2-year study period, the authors reported some startling results:

Are there any problems with the study?

If the study’s methodology can be regarded as sound, these results are deeply disturbing. Monsanto’s GM maize is widely consumed by both humans and animals, and its companion herbicide, Roundup, is the most commonly used herbicide in the world.  But who’s in a position to judge?  As sure as night follows day, the pro-GM brigade has been out in force since the results were published, loudly criticising the study for a range of methodological flaws.

However, some of the criticism has come from sources with no obvious connection to industry.

After examining the paper closely ourselves, we have our own reservations about certain aspects:

Photographs of Sprague-Dawley rats in the study: J = GM maize alone; K = GM maize + Roundup; L = Roundup alone [1]. But how old were these rats and what about control group rats?

While unlikely in itself to ever be regarded as conclusive evidence of the carcinogenicity of Monsanto’s GM maize and Roundup products, this study is likely to trigger a sea change in approaches to the evaluation of GM.

The controversial European Food Safety Authority (EFSA), well known for its track record of green-lighting European GM crop registrations, has already been asked by the European Union executive to evaluate Séralini’s study.  EFSA’s response is likely before the end of the year, following a preliminary review that is due to report in early October.  There’s also been discussion about a repeat or counter study.  But Prof Séralini has been quick to say that, “It's out of the question that those who authorised (Monsanto's) NK603 carry out a counter-study of our findings as there’d be a conflict of interest”.

Although there are, without doubt, several questionable aspects to this study [1], which we hope the authors will address in future publications, the results remain of profound concern.  Most importantly, the study attempted to investigate the effect of GM maize and Roundup across the entire lifespan of the rat, at low levels of exposure that include the dose range to which humans are typically exposed.  Any signal of potential carcinogenicity at these relatively low levels of exposure, as identified in any rodent model, must be taken seriously – and this study appears to have uncovered plenty such signals.  Among these are the endocrine disruptive effects of Monsanto’s Roundup, the herbicide used in conjunction with the Roundup-resistant GM maize.  Russia is certainly taking the results seriously.

We wholeheartedly agree that the researchers should continue to refuse to let EFSA examine their findings, as we share their concern that EFSA would simply dismiss the results.

More long-term feeding studies are definitely needed, and different strains of rodent must be used.  The Séralini study [1], among other things, shows up the gross inadequacy of the 90-day studies presently carried out by the biotech industry to ensure regulators approve their patented crops.

We also believe it would be in everyone’s interest for the journal to issue a minor amendment, via an erratum, giving appropriate calculations of statistical significance.  If we’re going to rely on science to make our decisions, let’s have good science.  It’s one of the few tools we’ve got to help us make decisions that affect the future of humankind and the other animals and plants with which we share the planet.

Regardless of the results of the present study, we feel that an immediate worldwide moratorium on the cultivation of GM crops is essential, based on current evidence of their potential health dangers.  And it remains an insult to our fellow human beings that GM-containing products are not universally labelled.

Truly, the Californian vote on GM labelling is becoming the issue of our times.