Home News ANH-INTL FEATURE: The tangled web of obesity and risk of death 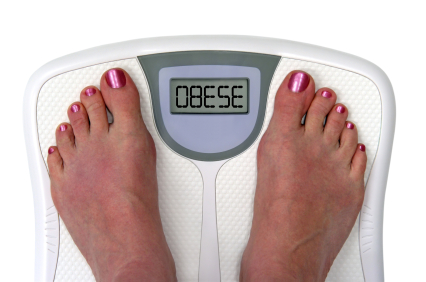 ANH-INTL FEATURE: The tangled web of obesity and risk of death

According to the results of a high-profile study, recently published in the Journal of the American Medical Association (JAMA), overweight or ‘mildly obese’ people may be at lower risk of death than those of normal weight. So should we be reassessing our attitudes to obesity or filing this study in the recycling bin?

With the holiday season just over, many people will have cast their eyes downward and been dismayed at the ravages wrought on their waistline by a two-week calorie-fest. However, if Katherine M Flegal, from the National Center for Health Statistics, Centers for Disease Control and Prevention (CDC), Maryland, USA, and her co-authors are correct, such understandable worries may be misplaced — at least among those that have sedentary lifestyles.

The US and Canadian scientists  performed a systematic review of existing data on obesity and risk of death, pooling hazard ratios (HRs) of death from all causes (all-cause mortality) from 97 studies.  As expected, both obesity overall – defined as a body mass index (BMI) ≥30 – as well as more extreme categories of obesity (BMI ≥35) were associated with increased all-cause mortality compared with normal weight (BMI 18.5–≤25). But the big and unexpected discovery was that the same was not true for mild/grade 1 obesity (BMI 30–≤35) or overweight (BMI 25–≤30). With HRs of 0.95 and 0.94, respectively, both were associated with lower all-cause mortality compared with normal weight.

The take-home point from the study is that the majority of both mildly obese and overweight people are apparently at a lower risk of death than normal-weight people.

Can we believe the results?

For many, this result would appear to go against everything they know about obesity. Aren’t there loads of research papers out there showing clearly that obesity, and even simple overweight, confer an increased risk of death and other chronic diseases, such as heart disease and diabetes? Well, yes, there are, and we’ll come to that in a moment.

However, this is not an obviously badly designed or executed study, destined to join the inglorious ranks of other bad studies we’ve covered in the past. For a start, the 97 studies included in the systematic review accounted for some 2.9 million individuals, from 11 countries worldwide.

Furthermore, the authors accounted for several important potential sources of bias, such as:

However, they couldn’t account for other biases or confounding factors that weren’t recorded across all studies but which might have been highly significant, such as the quality and amount of food consumed, the level of physical activity or the amount of stress endured.

This paper is fascinating for the number of different threads that must be untangled to gain anything close to a true picture of what’s going on. As the JAMA paper points out, obesity is a huge social, personal and political issue in 2013: “Recent estimates for the prevalence of obesity...among adults are 36% in the United States, 24% in Canada and 26% in England”. Under enormous pressure on the one side from an environment overflowing with energy-dense foods and ‘obesogens’, and from advertising images ranging from seemingly unachievable bodily perfection to outright malnourishment on the other, it’s no surprise that obese people are turning to increasingly desperate ‘solutions’.

But here’s a study, published right after the traditional holiday binge, that appears to offer a ray of hope for those at the less extreme end of the obesity spectrum. If overweight and mildly obese people are actually at a lower risk of death than their normal-weight peers, do a few extra pounds represent a good health insurance policy? In fact, if the relationship is true, don’t we need to redefine our concept of ‘normal’ weight? After all, you’d expect ‘normal’ weight to be the weight that affords the most health benefits – and reducing your risk of death would be near the top of anyone’s list.

Before we overturn all our cherished ideas about normal weight and obesity, let’s consider a few possibilities. First of all, Flegal et al used BMI to categorise patients, presumably because it’s the most widely used such measure with the most data available. However, BMI is far from perfect. It’s long been known that carrying extra fat around the midriff is associated with cardiovascular disease and death, and waist–hip ratio (WHR) is one alternative to BMI that not only predicts disease risk, but also accounts for differences in body shape. Rugby players are considered obese by BMI measurements, but not by WHR! Other potential alternatives to BMI include measurement of adipose tissue – the subcutaneous fat found all over the body, below the skin – and visceral fat, the fat surrounding the abdominal organs. Had sufficient data been available that utilised these methods instead of BMI, the JAMA authors’ results may well have been different.

Obesity is not healthy!

Secondly, it is of course well known that obesity is a risk factor for many chronic diseases, a fact that this study does nothing to change. Worse, as the UK’s King’s Fund showed last August, obesity tends to cluster with three other unhealthy behaviours: smoking, heavy alcohol consumption and lack of exercise.

Given the undeniable evidence base for a link between obesity and ill health, what’s driving the reduced risk of death from all causes observed in the JAMA paper – and others [1–4]? The researchers themselves theorise that heavier people generally receive medical care earlier and are more likely to receive optimal treatment, that excess fat may have heart-protective effects and that having higher metabolic reserves brings health benefits.

Constitution is the key

We have a few other ideas! One is that none of the research into bodyweight and mortality considers the effects of natal constitution: instead of realising that some people are naturally larger than others and therefore thrive at a higher weight, it simply assumes that everyone has the same ideal, ‘normal’ weight. As in so many things, the great Indian medical system of Ayurveda is way ahead of Western science here: the three ‘doshas’ – Vata, Pitta and Kapha – correspond to three distinct body types, Kapha being the most heavy-set of the three. Interestingly enough, Kapha types are often said to have the longest lifespan! 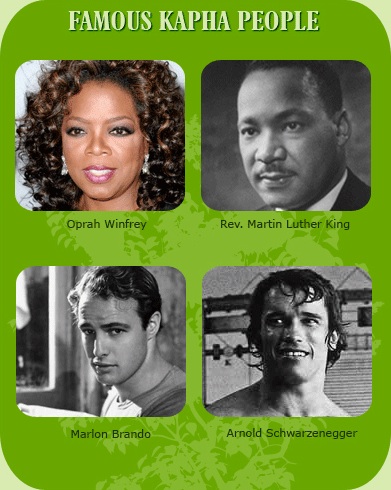 Obesity may protect against depression

If being overweight or mildly obese does genuinely reduce all-cause mortality risk, and isn’t just an artefact of BMI categorisation, it may be partly explained by a recently reported link between FTO, an obesity-related gene, and reduced risk of depression. Although it’s early days for this research, similar findings have cropped up before – so it’s a definite possibility. We can speculate that a combination of the anti-depression FTO gene and the happiness-boosting effects of many foods could result in overweight or obese people with lower stress levels.

More recent work has shown that inflammation is the mechanism by which stress exerts its physical effects.  To take this line of thought further, we spoke to Dr Leo Pruimboom, Scientific President of the International and European Association of Clinical Psychoneuroimmunology (CPNI) and scientific advisor to the Natura Foundation, to get his view.  Commenting on the JAMA paper exclusively for ANH, he said:

“The JAMA paper does not conclude that mild obesity increases life expectancy.  It only concludes that overweight is slightly (but significant) less related to all-cause mortality than normal weight and [mild] obesity.  Nothing is said about physical activity, food habits, stress levels, etc.

“The normal population is sedentary (Pedersen 2012, Pruimboom 2011) [5,6] and therefore the groups investigated in this meta-analysis consist of sedentary people.  Sedentary people are ILL, because a sedentary lifestyle should be considered a disease itself.  Looking at individuals with a sedentary lifestyle, people tend to suffer from inflammation.  Inflammation is very expensive [in a metabolic sense], and you can imagine that this needs energy; a little bit of extra fat in these individuals is therefore beneficial (Straub 2012, Ruiz, Pruimboom, Muskiet 2013) [7,8].  A little bit of extra fat protects the brain and the immune system against energy deficiency and should therefore be considered as protective – but only in sedentary people (Pruimboom 2013) [9].  The immune system is selfish in almost any way; energy stored as fat can be protective and serve as a resource when the expensive immune system and brain conflict with other expensive organs (Pruimboom 2013, Cunnane 2010) [9,10]. 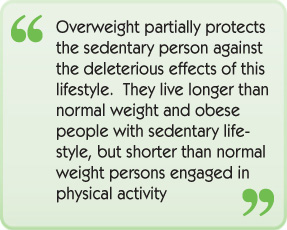 In many ways, this article is more interesting for the shadow it casts on various issues than for the research it presents.  It’s certainly not the case that being overweight or mildly obese is ‘good for you’ – indeed, if Dr Pruimboom is correct, patients in these brackets should definitely not become complacent!  The concept that a mortality advantage for overweight and mildly obese people represents a symptom of a sedentary, sick society is a fascinating and unsettling one.  And yet what more impetus do we need to maintain those New Year’s resolutions to get outdoors, get healthy and get moving?

[2] Romero-Corral A et al. Association of bodyweight with total mortality and with cardiovascular events in coronary artery disease: a systematic review of cohort studies. Lancet 2006;368:666–78.

[9] Pruimboom et al. When the immune system overrides the selfish brain. 2013 [in press].