Home News ANH-Intl Feature: GMO attitudes — how easily can they be changed? 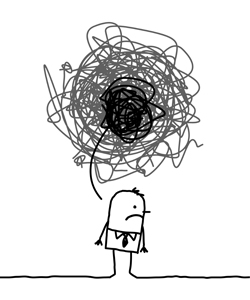 ANH-Intl Feature: GMO attitudes — how easily can they be changed?

Like all living creatures, we hanker for comfort or harmony, relatively at least. That’s the notion that stimulated Festinger’s theory of cognitive dissonance, put forward back in 1957. We experience a form of unpleasant psychological tension when we think about things that are incompatible, or dissonant, and we then try to resolve them to regain the sense of inner comfort we crave. 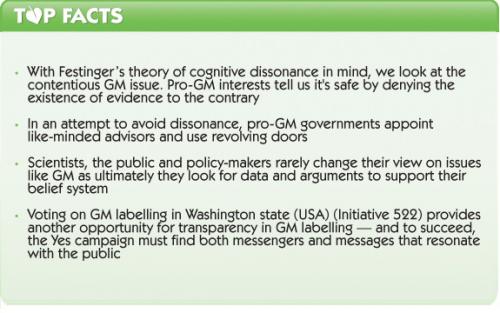 With this theory in mind, let’s now pick up the highly contentious issue of genetically modified (GM) crops, foods and animal feed. Many pro-GM interests, especially Big Biotech and the governments that support it, like to tell us that decisions should be made only on hard scientific criteria. They then tell us over and over again that there are no scientific data indicating any kind of significant environmental or health concern over the technology. Our distrust however stems at least in part because we know this to be patently untrue.

In this piece we look at some of the dissonant elements to which the public are exposed. We also suggest that cognitive dissonance – or perhaps more importantly its flipside, cognitive consonance or resonance – may explain why pro-GM propaganda appears to be falling on deaf ears. 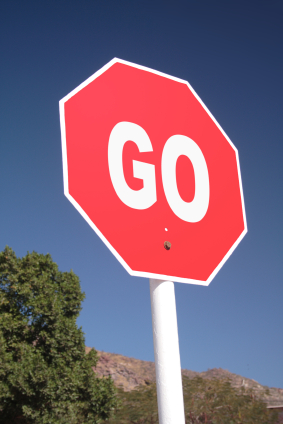 An example of cognitive dissonance: the stop sign that says go

It’s no secret (anymore) that governments have been desperately trying to overcome the European public's resistance to GM so it can end up on all of our dinner plates. The governments of Austria and Hungary have been at the forefront of governmental resistance. Unlike, the UK, France or Germany, these governments having no significant biotech or agrochemical industry to support. It makes sense to go with the will of the public and to take a cautionary approach to the technology based on the available evidence which suggests a plausible long-term risk to human health and the environment. The fact that Austria and Hungary are unified on this issue also resonates; the two countries were after all locked in a monarchic union — the Austro-Hungarian Empire — until relatively recently.

The European Commission’s consistently pro-GM views have long been known. It would make perfect sense then that when the EC’s president, José Manuel Barroso, were to appoint a chief scientific advisor in the form of Prof Anne Glover, she would be pro-GM. It would be fitting if she were also to hail from a country whose government was pro-GM. It helps even more if she doesn’t mind speaking out and calling those who oppose GM "mad".

To maintain consonance between a government, the minister responsible would need to be on the same page on big science and social policy issues, such as food and agriculture. Owen Paterson, the UK environment minister fits the bill perfectly. As journalist George Monbiot points out, he’s pro-business and anti-environment. So is his brother-in-law, climate change skeptic and GM-zealot, Matt Ridley. In an attempt to justify Ridley’s position on climate change, Monbiot wrote: “Ignoring hundreds of scientific papers which came to the opposite conclusion, and drawing instead on material presented by a business lobby group called the Institute of Economic Affairs, he argued that global temperatures have scarcely increased, so we should stop worrying about climate change.”

Anti-GM journalists will inevitably choose to focus on a given trait in a politician to help justify positions with which the journalist doesn't agree. Paterson and Ridley’s 'pro-business-whatever-the-environmental-cost' approach is perfect fodder. Paterson’s consistency is legendary. You shouldn't be surprised that he’s also a vehement supporter of such things as fracking and airport expansion?

And what would Paterson do if the chief scientific advisor to the UK government was opposed to GM, or fracking, for that matter. Well, that’s not something that we need concern ourselves with, because Sir Mark Walport is pro-GM.

What makes things even more interesting is that this battery of influential Brits not only think the same way on GM and related issues, they were appointed to their positions of high office within 10 months of each other. First it was Glover, in November 2011, in June 2012 Walport was appointed and then Paterson rose to his ministerial position in September 2012

Scientists who have something to be gained through Big or even Little Biotech industry support, tend to be pro-GM. Take those handpicked by the pro-GM, pro-vaccination, anti-alternative medicine, Science Media Centre, for example. Scientists from the John Innes Centre, Sainsburys Laboratory and Rothamsted Research all speak about the importance of supporting GM as a viable technology that aims to feed the world. They all receive money from the Bill and Melinda Gates Foundation, which is avidly pro-GM. The Science Media Centre is consistently pro-GM, and likes reporting on the such things as the £6.4 million grant given to the John Innes Centre for GM research by the Bill and Melinda Gates Foundation. It is also generally scathing of alternative medicine, a view that is consistent with its relationship with, and housing within, the Wellcome Trust, the world’s second largest private funder of medical research, after the Bill and Melinda Gates Foundation. And of course, it might be expected that the Science Media Centre finds it necessary to tell the public, journalists and other scientists that “following the money misses the point.”

The pro-GM lobby, in its continuous desire to see the public attitudes towards GM soften, needs to remove what it sees as unnecessary impediments. This includes ridding the world of the term ‘Frankenfoods’ that, to those suspicious or concerned about the technology, is delightfully explicit. In last week’s episode of Science Brittanica, Jonathan Jones PhD of the Sainsbury Laboratory was wheeled out by high profile host, Prof Brian Cox, to denigrate the term. “I don’t know who came up with it,” he said when asked the term Frankenfoods. “It was probably the Daily Mail,” he continued, which for any non-UK readers is shorthand for ‘certainly questionable, and quite probably untrue’.  “The thing that’s silly about it is that GM is just a method for conferring an improvement on crops,” continued Dr Jones.  “The crops are basically the same, so to suggest that there’s anything fundamentally different about them is just stupid.” And who’d want a high flying research scientist to think of them as stupid…

Anyone surprised that Brian Cox has spoken out more than once against complementary and alternative medicine (CAM)? It seems that there is as much resonance in pro-GM and anti-CAM views, as there is between anti-GM and pro-CAM ones. 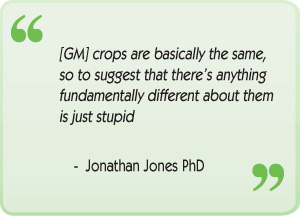 Right now, one of the biggest battlegrounds, one that’s firmly placed on GM home (i.e. US) soil, is the forthcoming vote on GM labelling in Washington state. Last year it was California’s prop 37. And largely courtesy of Monsanto and others pitting $45 million into the ‘vote no’ campaign, mandatory labelling of GM foods was narrowly lost. So what will happen this November with Initiative 522?

The Yes on 522 campaign appears to be well ahead presently. But with ever larger sums of money being diverted to the ‘vote no on 522’ campaign, and ‘say no’ campaigners like academic Jim Cook re-flying arguments successfully used in California, who is to say what the final outcome might be. One thing’s for sure, while the ballot for prop 37 was lost, it did a remarkable job of igniting the issue in the public’s mind. And this might just be enough to make the difference?

Coming back to the underlying theme of this piece — our pre-programmed desire to correct our cognitive dissonance — the chances are, those who already hold firm opinions will be unlikely to change them. Those who are undecided, on the other hand, are likely fair game for either camp. But the decision for the swingers might be more down to who, and how many, they identify more with, rather than with the arguments themselves.

But it’s still a numbers game. This means tried and proven tactics are being brought to bear, including: