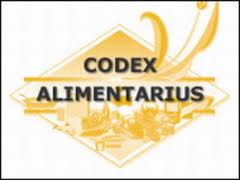 In a quiet suburb just 20 minutes from the centre of Frankfurt, Germany, governments and international non-governmental organizations (INGOs) came together between the 4th and 8th of November to debate and agree international standards and guidelines for nutrition.  Yes, this was the 35th annual meeting of the Codex Committee on Nutrition and Foods for Special Dietary Uses (CCNFSDU).  Whatever is agreed in these Codex meetings is increasingly set to become the template for how governments around the world regulate and manage the nutrition of their populations.  Unless, of course, it can ever be established that what they’re doing is bad science or a comprehensive and deliberate plan to stop people from managing their own health better – or a combination of both…

Present at the meeting was ANH-USA’s executive director Gretchen DuBeau, who for the second year running accompanied the six-person US government Codex delegation.  The US delegation was headed by Dr Paula Trumbo, who is acting head of nutrition programmes for the US Food and Drug Administration (FDA).  Other than Gretchen, there were two other non-governmental representatives: one from Abbott Nutrition and another from the International Formula Council.

It would be safe to say that Gretchen, as our representative, would have been the only person in the all-powerful US delegation keen to push the nutrition deliberations toward the most liberal of potential outcomes.  Although the US currently supports one of the most liberal regulatory environments for dietary supplements in the world, it seems hell bent on going the way of the European Union (EU). And since the EU’s approach is itself shaped heavily by the über-restrictive approach of the its biggest natural products marketplace, Germany, a liberal outcome was a tough ask indeed.

Commenting on the meeting, Gretchen DuBeau, also legal director for ANH-Intl, said, “Codex demonstrates a fundamental lack of understanding in the piecemeal way it addresses nutrient supplementation.  Low Nutrient Reference Values (NRVs) are being adopted, nutrients’ vital cofactors are being ignored, and synthetic forms are favoured over naturally derived vitamins and minerals.  Codex’s recent discussions on vitamin E illustrate this perfectly.  Also, the NRVs for calcium and magnesium were considered separately, despite that, generally, they should be taken together.”

On the wrong tracks

Given that the Codex Alimentarius Commission is an organ of the Food and Agriculture Organization (FAO) and World Health Organization (WHO), its nutrition committee can’t ignore the link between nutrition and non-communicable diseases (NCDs).  It is now consensus science that the likes of heart disease, cancer, type 2 diabetes and obesity are intimately linked to particular patterns of diet and lifestyle.  It’s also well recognised that simple carbohydrate-rich American and Western diets are among the most dangerous diets anywhere.

So, is Codex building a comprehensive plan for the goodies that we should all be eating to keep us healthy longer?  Hardly.  Progressing its work on NRVs for protein, vitamins and minerals is central to this year’s Codex meeting.  This is typical piecemeal work associated with committees that have no real interest in whole systems.  While we believe it’s okay to look at new introductions to the human food supply – such as pesticides and food additives – in this way, it makes no sense when applied to the function of nutrients in the human body.  Especially when we know that the health of an individual involves an interplay between that person’s exposure to the environment and his or her genetic make-up, with food being one of the most important environmental factors to consider.  Thanks to emerging science in the field of epigenetics, we even know that experiences among previous generations may have a significant influence.

Protein is a key macronutrient and there’s no doubt that some diseases are caused by insufficient protein.  So we won’t complain that Codex is proposing an NRV for protein.  But, while the lowly NRV of 50 g per day per 60 kg adult is enough to keep people alive, it is hardly enough for someone aiming to become an elite athlete.  Also, not all protein is the same.  The condition or quality of protein, how it’s damaged by cooking or preservation, and the ratio of protein to dietary intake of carbs and fats are even more important.  This kind of interaction is too complex for the kind of ‘committee science’ that goes on at Codex.

Vitamin and mineral madness at Codex

As for vitamins and minerals, how about the notion of agreeing an NRV for each essential nutrient that applies equally to every adult human on the planet?  How about not taking into account where in the world you live, what ethnicity or gender you are, how active you are, whether or not you are predisposed to particular diseases, or whether you are exposed to a higher than average burden of environmental chemicals?  We know that these and other factors can dramatically alter your requirement for particular nutrients, and not just vitamin D (the ‘sunshine vitamin’).

Codex is akin to a super-tanker.  It has built up a head of steam since its inception in 1963, and its nutrition committee in particular is being fuelled by governments from the USA, EU, Australia and Canada.  It is, therefore, very tough to get Codex to change direction. However, since its committee-based standards appear designed solely to prevent the development of gross deficiency diseases, they won’t have any impact on the suffering of millions caused by the big killer, chronic, degenerative diseases that are increasingly a priority for the WHO. If anything can force the Codex behemoth to change course, it’s this fundamental disconnect between policy and implementation.

The NRVs that Codex has come up with are laughable when seen through the lens of what we know from functional and integrative medicine.  A huge amount has been learned over the last 30 or so years about what is required to keep a human being healthy for longer, especially one suffering oxidative stress and inflammation, the states that underpin all the major chronic diseases.  Yet this information is firmly locked out of Codex proceedings.  The Codex committees, made up of government bureaucrats instead of clinicians or researchers, try to fathom what their governments and industrial players can live with, not what the people need. 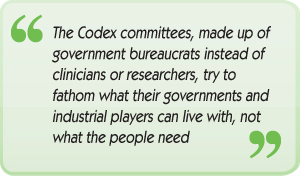 Putting this into some kind of perspective, we show below (Table 1) some of the recently agreed or proposed NRVs for vitamins and minerals, as compared with EU and US recommended levels. Most importantly, the table shows two variants of optimal intakes proposed by Drs Pfleger and Cheraskin respectively.


**With a calcium:magnesium ratio of 1:2

As you can see, the proposed levels are, in most cases, extremely low as compared with those recommended by leading clinicians. What’s more, there is considerable support for the Codex NRVs from key sectors of the supplements industry.  These parties are particularly vocal through the International Alliance of Dietary/Food Supplement Associations (IADSA), which recently voiced its support for the Codex NRVs.

Rob Verkerk PhD, ANH-Intl’s executive and scientific director, warned that international acceptance of Codex NRVs could lead governments to set very low borderlines between those levels allowed in food or dietary supplements and those regarded as medicinal.  He said, “It’s interesting that Australia continues to head up the electronic working group on NRVs.  Australia has already medicalised dietary supplements, so doesn’t have to worry about the borderline between food and drug levels.  Codex views are driven by bureaucrats who are saturated by data from pharma companies, which continue to dominate the manufacture of vitamins and minerals worldwide.  Codex delegations need to wake up to what’s happening in the fields of integrative and functional medicine, and need to understand you can’t look at nutrients in isolation.  We need a whole new framework for risk/benefit analysis and that’s why we’ve recently commissioned TNO in Holland to develop this.”

In summing up CCNFSDU’s most recent session, Gretchen DuBeau commented, “Overall, nutrient supplementation is too complex and individualised to be simplified to this extent.  This is particularly true on the world stage, where population needs vary wildly.  For instance, much of the world suffers from obesity, while many in developing countries struggle with malnutrition.”

We continue to suggest that individuals need to be deeply wary of recommendations made by governments. They also need to do everything within their powers to maintain their ability to exert free choice in what products of nature are used to manage their own health. Viva freedom in natural healthcare!