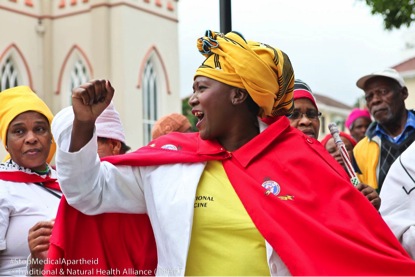 Update 17th November: The official TNHA report of the proceedings has now been published. 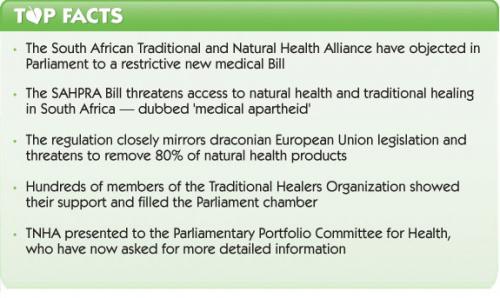 Presenting to the Parliamentary Portfolio Committee for Health, TNHA made clear its objections to the Medicines and Related Substances Amendment Bill (SAHPRA), which threatens to remove freedom for South Africans to access and use natural health products. The Bill has been dubbed “medical apartheid” for restrictions it will inevitably place on choice and traditional healing. Several other organisations and stakeholders also attended Parliament alongside TNHA.

So many people attended to show their support for natural and traditional medicine and demonstrate their concern that it was necessary to move to a larger chamber in order to accommodate all the traditional healers and supporters. Traditional singing and drumming preceded the procession into the Parliament. 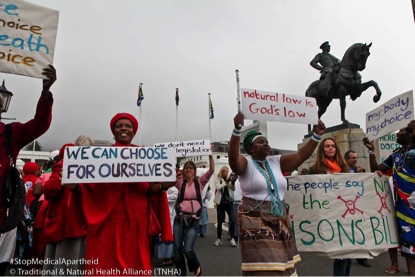 The SAHPRA Bill — or Bill 6, as it’s commonly called, was introduced in the National Assembly of the South African Parliament in February this year. It will be implemented by a new body — the South African Health Products Regulatory Authority, hence the SAHPRA acronym. As we’ve explained earlier, the new regulation closely mirrors draconian European Union legislation and threatens to sweep up to 80% of natural health products from the country’s shelves. The recent public hearings, held on the 29th and 31st October, and the 5th November, and lasting several hours, are available to download as audio files from the Parliamentary Monitoring Group Website (Registration is required).

We have spoken to Dr Bernard Brom, TNHA’s interim chairman, and chairman of the South African Society of Integrative Medicine, with whom we collaborate. He explained that, in his presentation, he asked the committee for recognition in South Africa of the different models and paradigms of medicine and healing.

He said: “Traditional medicine, natural medicine and integrative medicine are widely used in South Africa and should be fully respected, and not dominated by the biomedical model, which claims the scientific high ground”, and that “any regulation should be the responsibility of specialists in that paradigm and that the biomedical paradigm should leave the business of other paradigms alone for those specialist of that paradigm who are fully responsible and understand the need for good GMP, responsible claims and public safety”. 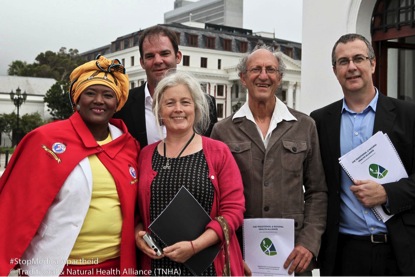 Dr Anthony Rees, TNHA General Secretary, showed the committee “how natural medicines are in a different league altogether regards toxicity”.  THO representative and TNHA executive committee member Dr Phephsile Maseko is reported to have asked “Why had the traditional healers been sidelined? Why, seven years after the Traditional Practitioners Act was passed, was there no funding to implement the provisions of the Act, making the traditional healers financial orphans, with no way to regulate themselves? What had happened to the commitment to include the estimated 250 000 traditional healers in South Africa’s formal health sector, which was of service to 27-million people, a major player in healthcare?”.

Dr Brom explained “they (THO) have linked with us (TNHA) to further their goals of becoming more accepted and we have their very solid backing with members that will walk the streets and play their drums and dance until they are heard. My vision is that if we can work together that slowly a genuine Integrative Traditional African medicine may emerge to the benefit of all South Africans”. 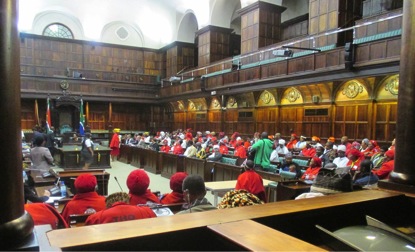 Members of the TNHA and their supporters in the SA Parliament

What’s the next step for natural health in South Africa?

TNHA’s legal council, Robin Stransham-Ford, is reported to have concluded by asking the committee to “send the Bill back for re-drafting to take into account the rights of all traditional and integrative doctors, and their constituencies”, and added “the new Act should draw practitioners into the core of the Medicines Act, where they would be able to be effective in making regulations for their own traditions and medicines… The TNHA is drawing up legal papers to challenge the regulations passed in November 2013 for complementary medicines – in advance of this Bill, which created the category – and will launch a constitutional challenge if this Bill was enacted”.

Dr Brom told us that TNHA had now met with two MP's in the opposition, who were “very sympathetic to our cause”, and “we have even been asked to come back to the portfolio committee to give some more detailed information of what we want”.

THNA are grateful for additional support, and would welcome new members.

Thank you to the TNHA for their permission to use their photographs.