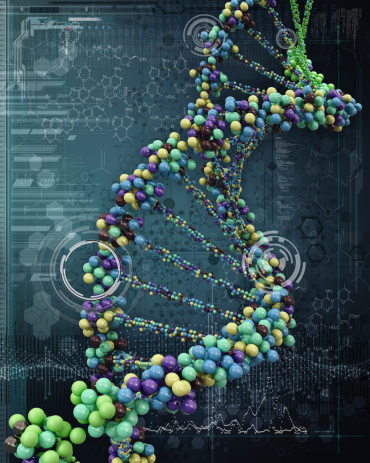 Google-backed, California-based, genetic testing company 23andme has this week launched a pared down version of its US tests in the UK. This comes after the company was forced to withdraw its health-related genetic testing reports by the Food and Drug Administration (FDA) in the US.

For £125 and a sample of spit, UK residents—unlike their US counterparts— will be able to “view reports on over 100 health conditions and traits”. You will also be able to “find out about your inherited risk factors and how you might respond to certain [12] medications”. And then there’s the fun bit: you can find out more about your ancestry and lineage. The ancestral test element, relying on results from mitochondrial DNA and Y-DNA, works wonders for 23andme’s Google-backed business fortunes, offering a big incentive for people to discover their “DNA relatives”. 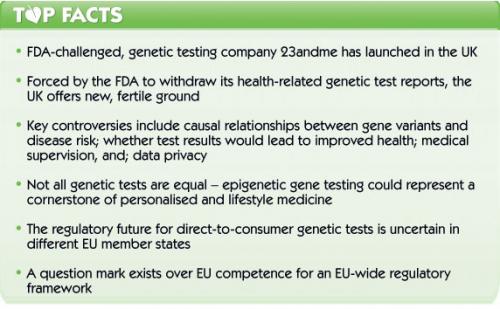 Given the difficulties the company has had with the FDA in the US, it evaluated the UK requirements carefully, received CE marks for its tests—and has been given the green light to go ahead by the UK medicines and medical devices regulator, the Medicines and Healthcare products Regulatory Agency (MHRA). It is somewhat ironic, given common perceptions of medical freedoms in the US and Europe, that the UK, as well as other EU member states, may provide a more liberal regulatory environment for genetic testing than the US.

Will a genetic test make you live longer and more healthily?

The big question for many is: will genetic tests help improve individuals’ health status, perhaps by modifying behaviours, diets or lifestyles? The reality is that no one is in a position to answer this question definitively from a population-based, nationwide perspective. That’s because there are so many variables at work, including the type and number of gene variants being tested, the extent to which genetic risks are modifiable, the degree of adoption of the tests, the quality and amount of information available to customers on receipt of results, the response of the medical profession, the nature of an individual’s response to news of particular test results and the quality of post-test information provision and support (if any). And that’s only some of the factors!

Judging by the debate on the subject on BBC Breakfast TV this morning, the debate is ripe.  Among the most controversial issues are the level of evidence supporting the relationship between our genes and particular diseases, whether the provision of a test result will lead to an improved health outcome, the presence, absence of quality of any medical or healthcare supervision post-test and—unsurprisingly—issues relating to data privacy.

There are many, somewhat rare diseases, like Huntingdon’s disease, that are strongly related to particular genetic types. But the diseases that lead to the greatest impact on most people’s lives, and that place the biggest burden on society and healthcare systems—namely cancer, heart disease, type 2 diabetes, obesity and osteoporosis — don’t generally relate to one, or a limited, number of gene variants. These diseases are, in essence, the expression of a highly complex interaction between multiple variants of multiple genes—and environment, over many years. The process starts even before birth and continues throughout life. Early on, and before the Human Genome Project unravelled the human genome back in 2003, it was hoped that the ‘cancer gene’, the ‘heart disease gene’, the ‘diabetes gene’ and the ‘fat gene’ would be found. This wasn’t the case. The reality is that these diseases involve a complex interplay between our genes and our environment.

Ignore epigenetics at your peril

What adds another layer of complexity is that our risk of a particular disease during the course of our lives isn’t fixed. Our gene sequences may be fixed, but genetic modifications caused by an interplay between our genes and our environment cause continuous changes to our genes and how they function and are expressed.  So, for example, if we eat better or exercise more, we can actually modify our genome ‘epigenetically’, mainly through the two processes of DNA methylation and histone modification. These changes can then be passed down to future generations.  Epigenetics represents a rapidly emerging field that is becoming an ever-more important part of functional and lifestyle medicine, and related disciplines. It’s still, unfortunately however, largely ignored by most primary care physicians or GPs.

And therein lies the problem for most people.  Most primary care doctors (GPs in the UK) have very little background or training in the interpretation of genetic tests and understanding the ways in which behaviour, diet and lifestyle can be used to manipulate gene expression epigenetically. Most would struggle to put together a dietary and lifestyle plan that would give you the best chance of optimising your health given your specific configuration of genetic polymorphisms. It’s a bit like being handed the greatest racing car engine the world has seen, but not being able to find the right person to put the engine into the car and get it working properly on a race track.

Not a panacea for personalised medicine

So, while the arrival of the 23andme’s tests in the UK is an important milestone, it shouldn’t be regarded as a panacea. But developing a large database of tests (there are over 650,000 users currently on the database) also provides many opportunities for research, something drug companies like Pfizer are using to their advantage.  Hence the very real concerns about data privacy.

It’s worth noting the difference between straight genetic testing and those companies carrying out epigenetic testing.  In the UK there are already other epigenetic testing companies around, albeit smaller niche companies, such as those offered by some forward-thinking functional medicine and nutritional therapy practitioners in the UK and other parts of Europe. These tests are empowering by nature because they focus exclusively on genetic polymorphisms that are modifiable by diet and lifestyle.

What does the future hold for direct-to-consumer (DTC) genetic testing?  Well, it may be just a matter of time before the juggernaut of European legislation catches up with 23andme and companies like it.  This is especially the case as more and more companies are coming forward offering tests and the need for an EU wide framework to replace the non-existent or highly varied national approaches in operation in different EU member states. Some EU countries like Portugal already disallow DTC genetic testing, while France only allows it when used for research purposes.

At the EU level, there is already a proposal for an amendment to the In-Vitro Diagnostics (IVD) Regulation for the regulation of DTC genetics tests on the table. The final form of this Regulation is uncertain and there are strong legal arguments to suggest that the EU should not assume competence for such matters.

There is a lot of horse trading that is likely to happen over the coming weeks and months—and the future for DTC testing is very uncertain, as is the provision of pre- and post-test information and support.

A lot will hinge on how the debate over the strength of evidence over how DTC genetic tests can be evidentially linked to improved health outcomes. The legal debate on EU competence will also be a key one.

Another factor that could play either way is how responsible individual companies are with their provision and use of information relating to the tests. Put simply the science and law in this area is highly plastic and mobile!

Our advice is: If you want a test, get one done, but remember the interpretation, counselling and support that you get after the test are at least as important as the test results themselves. Find out also how your data might be used, and read the small print when, or if, you decide to order a test. So choose carefully, preferably on the basis of others who’ve been satisfied with services provided.

One last piece of advice: If you don’t want a test, eat well, rest well and engage in regular physical activity. Your genes will thank you, whatever their state.