A new German meta-analysis, from Göttingen University was published this month in Plos One. The authors, Wilhelm Klümper and Matin Qaim, looked at the “agronomic and economic impacts of GM crops” and consolidated the evidence. They conclude that the literature study “reveals robust evidence of GM crop benefits for farmers in developed and developing countries”, and say “such evidence may help to gradually increase public trust in this technology”. Wikipedia already proclaims the study “the largest review yet concluded that GM crops’ effects on farming were positive”. We take a look at the study and comment on what it found. 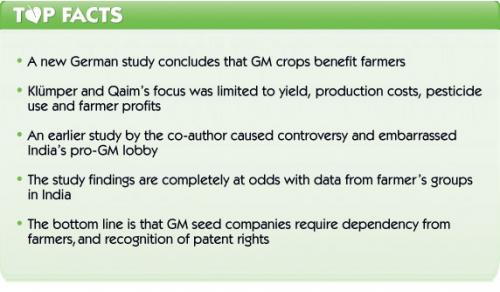 Good for the environment, production and farmer profits?

The study, entitled “A Meta-Analysis of the Impacts of Genetically Modified Crops”, was funded by the German Federal Ministry of Economic Cooperation and Development (BMZ) and the European Union’s Seventh Framework Program under the Grant Agreement 290693 FOODSECURE. 147 ‘impact’ studies were included, and were selected because they provided “primary data from farm surveys or field trials anywhere in the world”, and reported on “impacts of GM soybean, maize, or cotton on crop yields, pesticide use, and/or farmer profits”. The authors say that “on average, GM technology adoption has reduced chemical pesticide use by 37%, increased crop yields by 22%, and increased farmer profits by 68%. Yield gains and pesticide reductions are larger for insect-resistant crops than for herbicide-tolerant crops. Yield and profit gains are higher in developing countries than in developed countries”.

Qaim: ‘in defence of Monsanto’ fame

German Matin Qaim is a long-standing defender of Monsanto’s Bt Cotton. What’s more, it seems that he and associated industry-friendly fellow scientist David Zilberman have caused much controversy, a storm of protest, and have even proved an embarrassment to India’s pro-GM lobby with an earlier ‘shoddy publication’. Their findings were completely at odds with other findings by farmer’s groups in India.

The dichotomy of views is to a large extent down to what data you care to look at. And while Klümper and Qaim included 147 studies from the peer review and grey literature (books, unpublished reports, etc) in their recent meta-analysis, there were more than this number of studies (157) rejected because they didn’t meet one or more criteria required. It’s worth thinking how and why particular studies are carried out and funded. The studies on non-GM crops selected for comparison are equally important. This very approach has of course been central to the ongoing debate between organic and non-organic crops. Klümper and Qaim’s focus was actually very limited: yield, production costs, pesticide use and farmer profits. Large amounts of other data, highly relevant to the GM debate, were ignored. Amongst them were the somewhat key issues of health and environmental impact (other than pesticide use), long-term trends, and the effect of creating agricultural monopolies, a major ticket carried by Monsanto and its’ competitors in the GM seed industry.

No less than 15 of the studies included in the meta-analysis can be attributed, at least partially, to Matin Qaim, and two thirds of the papers relate to Bt Cotton, Qaim’s hobby horse.

Ironically, included among those 147 publications is a single 2008 study by Dr Vandana Shiva, in which she refers to ‘toxic papers’ “being generated in the defense of GM crops, especially Bt Cotton… they have no grounding in reality. They assume false number crunching can be a substitute for the truth. And they are deadly for food and agriculture security, and farmers livelihoods”. Dr Shiva’s paper is entitled “Toxic Genes and Toxic papers: IFPRI covering up the link between Bt. Cotton and Farmers suicides”. It specifically targets a 2008 International Food Policy Research Institute (IFPRI) paper by G. P. Gruère, but a read through Dr Shiva’s article, and you begin to wonder how many other ‘toxic papers’ lurk amongst the 146 other pieces of literature studied by Klümper and Qaim. We noticed a 2012 IFPRI paper by Gruère among them.

Klümper and Qaim acknowledge public concern that “studies funded by industry money might report inflated benefits”, but add that their results “show that the source of funding does not significantly influence the impact estimates”. Within Dr Shiva’s 2008 paper (included in the literature), some anomalies are revealed, which cast further doubt on the general accuracy of studies where there are vested interests. Shiva highlighted significant differences between a Monsanto commissioned study and an independent one e.g. the yield increase of Bt Cotton was claimed to be 92% by a Monsanto study and a reduction of 9% in the Andhra Pradesh APCIDD study. She also wrote “our field studies in Vidharbha show a thirteen fold increase of pesticide use by farmers since Bt Cotton was introduced in 2004”. Yet the IFPRI 2008 Gruère paper “states that Bt Cotton reduces the number of pesticide sprays by 32-40 per cent, reduces pesticide costs by 30-52 per cent,… increased yields by 34-42 per cent, and raises net returns by 52-71 percent”. Shiva revealed every claim in the latter statement to be false. And in 2013, she stated that her foundation’s “field studies and studies of India’s parliament and leading scientific institutions” had also revealed statements by Qaim to be false.

Designed to be profitable for biotech

Regardless of whether farmers have or haven’t sometimes made seasonal gains from using GMO crops, particularly before the development of insect or weed resistance, the bottom line is that the technology is designed to be profitable for the biotech industry. Farmers have to pay a premium for GM seed and they must become wholly dependent on the GM seed company and recognize its patent rights. A University of Reading study included by Klümper and Qaim’s analysis, which claims positive impacts from Bt Cotton, admits this can result in higher average costs overall for farmers using Bt Cotton compared to those not using it. Dr Shiva said last year of Bt Cotton, and farmer suicides “The price of seed jumped 8000%. Monsanto’s royalty extraction and the high costs of purchased seed and chemicals have created a debt trap. According to Government of India data, nearly 75% rural debt is due to purchased inputs”.

Klümper and Qaim have claimed that insect-resistant crops like Bt Cotton in ‘developing countries’ have so far proved the most successful of these biotech crops. But non-biotech facts and figures, and scientists on the ground in India, such as Dr Shiva, and a myriad of other sources of information would appear to suggest more extensive failure rather than persistent success.