Home News Milk – the good, the bad and the not for everyone! 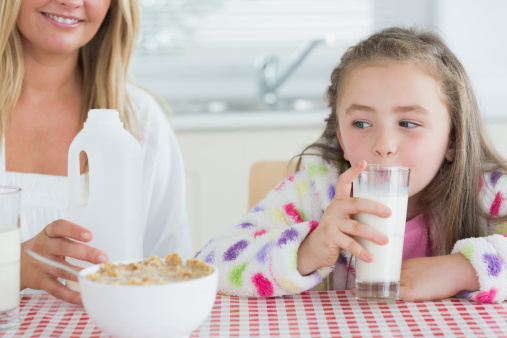 Milk – the good, the bad and the not for everyone!

Do the nutritional benefits of dairy outweigh the potential health risks linked to intolerance and autoimmune disease?

Last week, we offered our base reasoning why dairy is off the ANH-Intl Food4Health guidelines. There wasn’t space to give much in the way of detail, which your post-article feedback rightly reflected. This week, the milk story continues so that you can make your own informed choices about whether to keep indulging in dairy products, change your dairy choices, keep them for special occasions only, or say goodbye to them permanently.

There’s no denying that milk, whether from a cow, goat, sheep, buffalo or camel, provides beneficial nutritional factors. The key questions include whether you need to obtain those nutritional factors from milk and whether the potential health risks outweigh any benefits, at least in some individuals. Let’s be upfront: the science presents a mixed bag of results so it’s impossible to make a definitive judgment one way or the other that will apply to all people at all times of their lives. Some people could derive a great deal of benefit from the right kind of dairy products and others will likely increase their risk of dairy-driven health problems. And don’t forget, the addictive nature of the casomorphins can override any gut instinct you may have about whether milk is doing you any good or not.

Pasteurisation is a process developed by Louis Pasteur in 1864. Its main initial purpose was to keep beer and wine from turning sour. It involves heating the liquid to a high temperature and then rapidly cooling it before bottling/packaging. The reason why it’s so effective at keeping milk for longer is because the heating process reduces the pathogens present that may cause spoiling or illness. It also deals with the less-than-desirable counts of somatic cells, which include the neutrophils that comprise pus as we illuminated last week. However, it also may damage, reduce the activity of, or destroy, the delicate enzymes and immunomodulatory proteins present, including lactoferrin, secretory immunoglobulin A, and lysozyme.

Raw milk, on the other hand, remains just as nature intended it, at least for the animal for which it was intended. It is unprocessed, going from udder to bottle without any denaturing heat treatment. Just like human breast milk, raw milk contains a host of enzymes, immune-modulating proteins, diverse beneficial bacteria, sugars, proteins, fats, minerals, nucleotides, antibodies and other essential elements needed to nourish a developing baby. What it can’t do is modify its quality according to the needs of the neonate, as in nature, this being a fascinating and important aspect of mammalian life. There are no pathogenic bacteria in raw milk whilst it’s inside the animal, but bacteria found on the teats and in the milk ducts allow resident beneficial bacteria to protect the milk from pathogens. Raw milk destined for human consumption is never mixed with milk from other dairies and obviously is not heat-treated in any way, being never pasteurised. If you’ve made your mind up that there’s a clear argument to go for raw milk from a reliable and trusted source; you just need to choose which animal you want it from!

One of the reasons why milk has been promoted so vigorously in Europe since the end of the World War II is because protein was in such short supply and the dairy industry provided what seemed to be a win/win solution. Provide the population with a cheap, ubiquitous, protein source and rebuild a war-wounded economy at the same time. It’s true. Milk does provide a significant amount of protein, plus additional nutritional factors. Figure 1 below outlines the breakdown of the milk protein fractions, of which casein and whey are the main components.

Protein is essential to maintain life. Our bodies break it down to its constituent building blocks, amino acids (see Figure 2), in order to build tissues and create other essential molecules such as glutathione, which is central to detoxification and one of the most potent antioxidants in the body. Whey protein boosts the production of glutathione in the body, but only when it’s provided in its undenatured state. Through making more glutathione available to the spleen, whey also promotes enhanced immune function given that the spleen speeds up the production of white blood cells – but again, only if it’s not been pasteurised. As milk is heated, the delicate whey protein fraction becomes denatured, reduces and starts to bond with the casein fraction, limiting its effectiveness. It’s also the whey protein fraction that contains the immune-modulating immunoglobulins, antibodies made up of glycoproteins, which are critical for the proper functioning of our immune system. Much of the benefit derived by raw milk drinkers is down to the immune-supportive properties found in the whey protein fraction.

There’s been a lot of talk in recent years about the merits of A2 cow’s milk over A1, with the latter being the norm on your supermarket shelves. The terminology refers to the two most important genetic variants in cows related to the beta-casein gene which in turn affects the beta-casein fraction in the milk, and particularly the amounts of the bioactive peptide, beta-casomorphin 7 (BCM-7). Although the A1 variant is now by far the most common in Western countries, the A2 variant is the evolutionary norm in cows.

There is emerging evidence that the roughly 8-fold higher levels of BCM-7 in A1 milk may be related to a wide range of risks, including oxidation of low density lipoprotein (LDL) cholesterol, as well as being a potential risk factor for type 1 diabetes, heart disease and possibly sudden infant death syndrome, autism and schizophrenia. The A1/A2 and BCM-7 issue has been handled in some depth by nutritionist Sue McGarrigle in a feature article of the British Association for Applied Nutrition and Nutritional Therapy (BANT).

Another interesting point is that many people who don’t like the taste of ‘ordinary’ A1 milk, find A2 milk very palatable. More to the point, some, but certainly not all, those who have suffered adverse reactions to cow’s milk, often linked to cow’s milk allergy, will do fine given A2 milk instead of A1 milk.

Amazingly the primary difference in the two milks comes down to just one amino acid. The beta-casein proteins found in cow’s milk are made up of 209 amino acids, but at position 67 in A1 milk, there is histidine instead of proline. The histidine is unable to bind as tightly into the amino acid chain causing it to break off, creating a 7-amino acid sequence that is BCM-7. As you know from last week, casomorphins behave like narcotic opiates, but also cause digestive distress for many people, that in turn can trigger health and behavioural issues in others. Allergies and intolerances to cow’s milk may not only be down to the presence or amount of BCM-7, but may be linked to a sensitivity to alpha-casein, which is the predominant protein in both raw and pasteurised milk.

A detailed comparison of the nutritional factors in 6 different mammalian milks, including human breast milk is given in Table 1. However, please bear in mind that that these factors may vary considerably depending on time of day, environment, stress levels, hydration levels and the nutritional state of the mother producing the milk. The data are based on averages taken from two key studies. Table 2 offers the comparison between the milks for amino acid content, with the 9 essential amino acids marked for clarity. 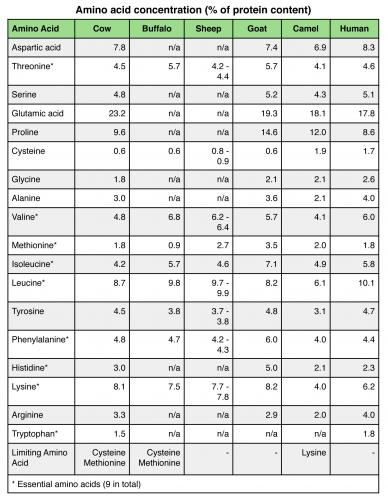 Despite the range of nutritional factors in mammalian milk, there are still a very significant number of people, up to 100% in some ethnic groups, for whom milk represents a significant health risk, rather than a superfood. Whilst raw milk — preferably raw A2 milk — is unquestionably the healthiest and best tolerated cow’s milk option, it still doesn’t eliminate issues of lactose intolerance, milk protein intolerance or the link to autoimmune conditions that affect some subsets of the population. Secondary lactose intolerance, caused by impaired digestion through dysbiosis (imbalanced gut flora) that affects the ability of the microvilli to make lactase, can also happen at any time in life.

Autoimmune disease is a broad term that applies to a diverse range of conditions with different symptoms that all have the same issue at the core. Immune cells start attacking ‘self’ cells as pathogenic invaders — the body literally turns on itself. The mechanism for this has been attributed to molecular mimicry where immune cells lose the ability to differentiate between self and the ‘memory’ of an antigen or invading pathogen.

Consumption of cow’s milk, alongside gluten, leads to one of the highest levels of intolerance for the reasons stated above. But the double whammy is caused by the similarity in structure between some of the protein molecules and cells that exist in the human body. Unless you have a rock solid, healthy and impermeable gut — which is extremely rare given the prevalence of leaky gut caused by today’s high dependence on gluten and wheat-based foods, some of the milk protein fractions will leak out into the surrounding tissues. Once outside of the gut, they may trigger an immune reaction as the body reacts to the foreign proteins and starts destroying them. It’s a perfectly natural process for your immune cells to then create a ‘memory’, which will ensure a faster reaction the next time the same occurs. It’s a very effective evolutionary strategy for survival, but in those susceptible to auto-immune diseases, the immune system fails to differentiate between alien molecules and those that are intrinsic to it. Environmental factors, including diet (e.g. wheat, dairy), genetic vulnerability and lifestyle may increase an individual’s susceptibility to auto-immune disease.

Patients with type 1 diabetes, coeliac disease and latent autoimmune diabetes in adults have been found to have significantly increased levels of antibodies to beta-casein. No antibodies to beta-casein were found for patients with multiple sclerosis (MS) or autoimmune thyroid disease in the same study. However, 2-years later, a study in 2004 uncovered molecular mimicry between butyrophilin, a lactoglobulin in the whey fraction, and the protein in human myelin sheaths. The first mention of a potential link between dairy and MS was postulated back in the 1950’s and has resurfaced just about every decade since. If you operate on the ‘no smoke without fire’ principle, then the 2004 study should represent a real breakthrough for MS patients after 54 years of research on the subject.

The most predictable element of our relationship, as adult humans, with the consumption of animal milk products, is the completely unpredictable outcome of ingesting it! Whilst there is no evolutionary evidence that we are supposed to keep drinking milk, including from humans, past weaning, some people derive great benefit from its nutritional factors and in turn show no obvious adverse effects. Others have their health decimated by what seems such an innocuous white liquid. Coupled with gluten and sugar, these three food groups are increasingly being revealed as the main dietary drivers for chronic disease and what anthropologists term, an evolutionary ‘bottleneck’.

As always, the choice whether or not to drink milk, and in what form and from which species of animal, is yours. We hope this article goes some way to assist your informed choice.