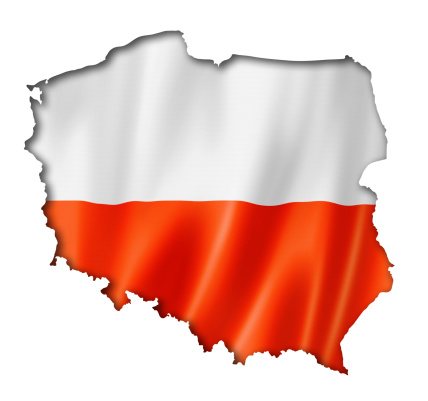 Imminent land reform in Poland risks destruction of livelihoods and health of rural communities, while opening the door to GM crops

“The struggle for land reform, which would shift the balance of power in favor of marginalized landless farmers, has been going on for many decades. However the food and financial crises contribute to worsening the trend towards land concentration, in which governments, agro-industrial corporations and private investors buy up fertile land in poor countries, [largely to spread GMOs] depriving small farmers of their ability to grow their own food.”

Since joining the EU in 2004 Polish government land agencies have been selling off prime farmland to foreign speculators and corporations. The Polish government has consistently ignored demands from the farmers to stop this practice to protect rural communities and their environment. 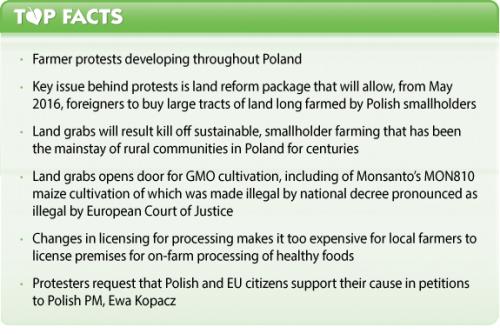 At the moment, and up until May 2016, permits are still required for non-Polish nationals to purchase land. But after that, the door will be wide open to legal ‘land grabs’ by outsiders. In retaliation, the farmers started blockading main roads in north-west Poland and using their tractors on the streets to highlight the message to keep Polish land for Polish farmers. Little coverage is being given of these issues on international news, and even in Poland, coverage is limited and generally biased against the interests of local farmers.

Sir Julian Rose, President of the International Coalition to Protect the Polish Countryside (ICPPC) and ANH-Intl friend told us, “There have been numerous meetings with government officials - but none has resulted in the rescinding of the sale of this ex-cooperative land to foreign sources.” He also mentioned a meeting with the Vice Minister who had “nothing but scorn for the farmers' actions and financial stresses.”

Protests are hotting up in different parts of the country. In Warsaw, there is a protest camp known as Green City situated opposite the Prime Minister's Palace where various actions are coordinate daily - including a recent participation with a basket of Polish farmhouse ‘illegal food’ taken to the Prime Minister Ewa Kopasz's headquarters along with a letter calling for immediate action in support of farmers’ demands.

“This ‘illegal food’ is some of the best, traditional on-farm processed food in Poland but the family farmers aren’t allowed to sell it as it requires a licensed separate building – something that none of the farmers can afford” said Jadwiga Lopata, co-director of the ICPPC.

Sir Julian added; “The making of the best farm-processed foods illegal is subjecting Poles to an impoverished supermarket diet that comprises 'legal' junk food forming the foundation of the national diet. No wonder so many are getting sick and the small- and medium-sized farms are going bankrupt.” 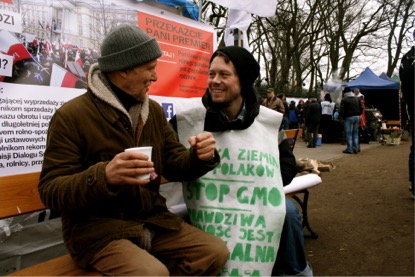 This camp is being supplied with quality farm foods grown on the protesting farmers’ land. Local supporters are also bringing food items to the camp, which has been standing since 19 February 2015. It's a sign that public sympathy for the farmers position is growing. But as the growing season begins in Spring, many farmers may be forced to abandon the protests and return to their farms. The government is well aware of this and hoping the protests will die a natural death. The farmers themselves are realistic and expect that their efforts will at least delay imposition of the planned land reforms.

The concern over large-scale ‘land grabs’ was the initial reason for farmers to take to the streets of Warsaw. But with the support of the ICPPC, they have included in their calls an end to making Polish farm-processed foods illegal, and a proper legal enforcement and policing of the genetically modified organism (GMO) ban in Poland. The determined farmers of the ‘Green City’ pavement camp continue to demand: “NO to GMO”, “No to land grabs” and “YES to real farm foods!”

In 2012, it was announced by Polish Agriculture Minister, Marek Sawicki, that there would be a complete ban on growing US Monsanto’s MON810 genetically modified Bt maize. The Polish have, in the main, long been passionately against GMOs, and the proposed land reforms have strengthened anti-GMO sentiments even further.  The ICPPC and the protesting farmers are now demanding a formalised ban of MON810, via an Act passed by the Polish Parliament. There are major concerns that the present bans in Poland that were made under national decree but have been challenged as illegal by the European Court of Justice.  The national bans could easily be over-ridden and with land grabs in the offing, the door may be wide open to exploitation by GM interests at the expense of smallholder farmers and rural communities. 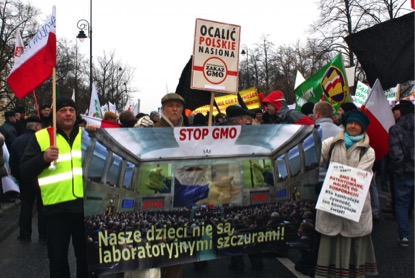 National media have taken an interest in the demonstrations, but despite all the filming that has occurred, just a fraction has been aired publicly. Instead, the media is following and putting more emphasis on calls by Senator Isdebski for farms affected by wild pig damage to be compensated. Farmers in West Poland also face loss of land due to a vast coalmine and power plant proposed by Polish energy company PAK. The mine would cover 11,900 hectares of land (29,400 acres), leaving up to 5,800 people subject to being forcibly relocated and a windfarm having to be demolished. Those involved with the grassroots campaign fear crop production shortfalls, rising air pollution levels, and a drastic depletion of local water tables over a 31-mile (50km) radius.

In the words of Sir Julian; “Only a revolution can turn around this state of affairs.”

The ICPPC have asked that Polish and other EU citizens send expressions of your support for Polish farmers to Prime Minister Ewa Kopacz and the Civil Affairs Department in Poland using email [email protected]. Thank you.