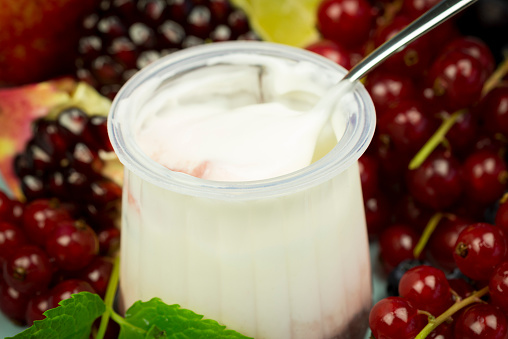 Reclaiming our right to commercial language about healthy foods

The debacle caused by the EU’s Nutrition and Health Claims Regulation (NHCR) for consumers and the natural health industry alike is reaching farcical proportions.  Plunged into an extensive information blackout given the paltry 250 authorised health claims available, consumers are now meant to naturally intuit that their previously labelled probiotic and prebiotic products are just the same.  This, in spite of the fact that they’re now lacking either front or back mention of any of the beneficial bacteria or fibres and are labelled as containing nondescript or potentially ambiguous things like bacteria, microorganisms or fibre! 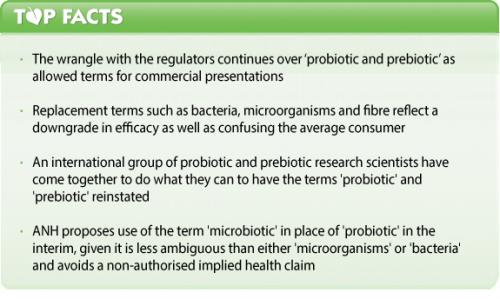 The terms probiotic and prebiotic are now deemed by the European authorities to be unauthorised health claims. The reasons for the rejection of health claims applications for these product categories are complex, suffice to say the huge number of historic studies available didn’t fit the criteria the European Food Safety Authority (EFSA) was looking for.

Still keen on putting that container of live yoghurt in your shopping basket knowing it’s laden with ‘microorganisms’?  For a sector that has been extremely hard hit by the NHCR and faced thousands of health claim rejections since 2008, this is one issue that unites consumers and natural health practitioners, and often even big and small industry players.

Doesn’t quite have the same ring to it, does it?  Language is important to us.  The marketing people know it can make or break a sale – and so do the regulators.  According to the EFSA, the term probiotic – which literally means ‘pro life or living’ – confers a health benefit.  Any food or food supplement in Europe that infers a health benefit in a commercial presentation must have an authorised health claim in place, unless it escapes this provision via so-called transitional measures and is subject instead to national rules.

Sounds simple, but authorised health claims must be based on proven cause and effect relationships between the claim and the active ingredient(s) in the product.  Given that it took around 30 years for the cause and effect relationship to be found and proven between smoking and lung cancer, you can appreciate that it’s a much bigger ask given the limitations in current science and the fact that food has multiple and complex interactions.  It also requires new studies that are specifically designed not to advance our scientific understanding of the complex relationship we have with our gut microbiota, but rather ones specifically designed to meet EFSA’s requirements, now subject to new guidance.

includes all prokaryotic organisms and therefore all bacteria, including both those we refer to as probiotics and those that live under toilet seats.

Many regulators appear to have accepted terms like ‘microorganism’ and ‘bacteria’ as suitable alternatives to the term ‘probiotic’, and ones that don’t conflict with the requirements of NHCR.  We don’t agree.  In common parlance for the average consumer, the term is more generally used to describe foodborne microbes (bacteria, fungi and viruses), as well as pathogenic bacteria (e.g. Chlamydophila, Ehrlichia, Rickettsia, Salmonella, Neisseria, Brucella, Mycobacterium, Listeria, Francisella, Legionella, Yersinia pestis), along with many other fungi, algae and viruses.  Seeing the term on your favourite live yoghurt might be a little off-putting and makes a total mockery of the NHCR, which exists to stamp out ambiguity and lessen confusion for consumers! We are also deeply concerned with the long-term effects of downgrading the terminology of constituents in foods that are known to have important beneficial functions, experienced by millions.

It’s worth noting that many of the claims rejected by EFSA met this fate simply because the historic studies available to EFSA, while demonstrating clear benefit, did not sufficiently characterise the strain of the probiotic studied.  EFSA panels only look at what’s in front of them and there is no option to do any retrospective trawling to find out more about methods or materials used in particular studies.

Many organisations have been working on terminology around probiotics in a bid to reclaim our right to use the long-standing terms that have meaning to the consumer.  The NHCR amounts to one of the most draconian restrictions to our freedom of speech yet encountered and now an entire slice out of the dictionary is off limits if used in conjunction with foods and/or food supplements in a commercial presentation.

An interesting development is the efforts of a group of prebiotic and probiotic research scientists with membership of the International Scientific Association for Probiotics and Prebiotics (ISAPP).  At a conference in Barcelona on Saturday 14th March, Colin Hill PhD on behalf of ISAPP, explained, as reported by Nutraingredients, that in addition to regaining the term ‘probiotic’ as a marketing tool and a product descriptor, other descriptions like ‘live and active cultures’ “should be returned to public use”.

Calling a spade a spade

Whilst the interim wrangles continue on reclaiming our language, we’ve been looking to find or create new terminology that is neither ambiguous, nor false. Probiotic bacteria as found in the gut microbiome are known by everyone to be microscopic in size. They are also living organisms.

a) as an adjective, “biotic” is defined as:

1. “of, relating to, or caused by living organisms”

2. “of or relating to life; especially : caused or produced by living beings”

b) “-biotic” as an adjective combining form is defined as:

1. having a (specified) mode of life

Employing the KISS principle, we’re proposing that terms such as ‘microbiotic’ that refers both to the size and living nature of the organisms, is the way forward in the interim.  But we fully agree with the scientists at ISAPP that the larger and longer-term goal should be the reclamation of the terms ‘probiotic’, ‘prebiotic’, as well as ‘live’ and ‘active’ cultures.  While we’re at it, let’s also get ‘superfoods’ back into commercial usage.  These terms might need a little more characterisation, but they are certainly meaningful to consumers, and help them to discriminate between healthy and less healthy foods, the latter especially being awash in the marketplace.