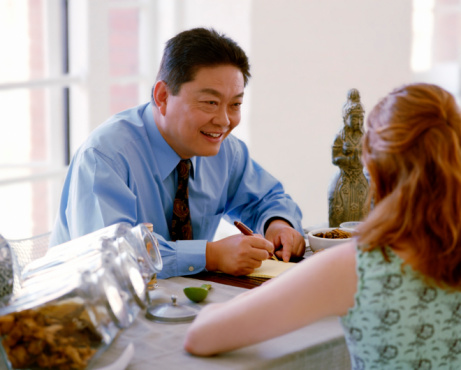 UK Deputy Chief Medical Officer&rsquo;s report finds &lsquo;insufficient evidence&rsquo; to support statutory regulation for herbalists, leaving the profession in an even more vulnerable place than it was before the EU&rsquo;s herbal medicines directive was passed over 10 years ago

A large number of UK herbalists have long hoped that their push for statutory regulation (SR) of their profession would give them a more secure footing in the healthcare system, give the public more confidence in herbalism and would also improve herbalists’ access to unlicensed manufactured herbal products.

But after a little over four years since the UK Health minister Andrew Lansley announced his promise to grant SR to UK herbalists, the rug appears to have been firmly pulled from under foot. 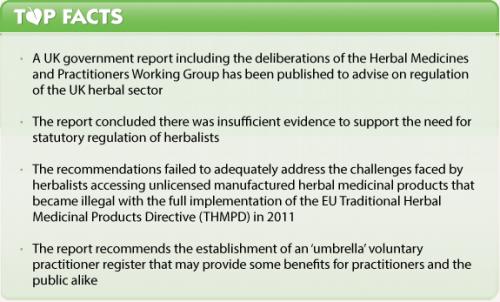 In short, a plethora of obstacles have been used by Prof Walker and his team to provide a blockade against SR for herbalists. Among the main reasons cited were: insufficient evidence of safety and efficacy, complications in EU and UK law, and government policy in the form of the current government’s ‘Enabling Excellence’ command paper. All of this and more has been used to say ‘no’ to SR and a ‘possible maybe’ to voluntary self-regulation, assuming more of the right kind of data are accumulated. That of course might be years away.

The report is intended to advise the UK government on how to regulate the sector. The Working Group had brought together representatives from the main herbal traditions, the Herbal Medicines Advisory Committee (HMAC), the Department of Health and the Medicines and Healthcare products Regulatory Agency (MHRA), to assist “in examining the options for regulation of herbal products and practitioners in the light of the new European legislation”.

‘No evidence’ to support need for SR

One of the main aims of the Working Group was to examine the feasibility of UK herbal practitioner regulation on a statutory or voluntarily self-regulated basis. Despite the prior government promise back in February 2011 to deliver SR, Professor Walker concluded that “despite strong calls by many for statutory regulation, there is not yet a credible scientific evidence base to demonstrate risk from both products and practitioners which would support this step”. In addition, he said that the “limited evidence of effectiveness of herbal medicines in improving health outcomes” makes it difficult to establish the necessary good practice boundaries. Instead, he recommended that the sector organisations develop an ‘umbrella’ voluntary register, and collaborate on collecting safety data, developing standards, establishing an ‘academic infrastructure’ for research and training. In due course, he added, the voluntary register could seek accreditation from the Professional Standards Authority for Health and Social Care (PSA). Meanwhile, he recommended that the government should support further research “in order for an evidence based decision to be made about the level of assurance required to ensure public protection”. Many, but not all, herbalists have long argued that public protection is best served by the immediate statutory regulation of their profession.

The other key aim of the Working Group was to explore ways of ensuring legal access to the widest possible range of herbal products for UK practitioners of all traditions. UK practitioner access to unlicensed, manufactured herbal medicinal products ceased when the herbal exemption for their use (under Section 12(2) of the 1968 Medicines Act) was revoked on 1st May 2011, at the time of full implementation of the Traditional Herbal Medicinal Products Directive (THMPD) (2004/24/EC).

Although something of a technicality, Professor Walker incorrectly states in his report that the THMPD “effectively banned the importation and sale of large-scale manufactured herbal medicine products…..[which] severely limited the scope of some herbal practitioners to continue practising, particularly those from the Traditional Chinese Medicine (TCM) and Ayurvedic traditions.” Technically, the THMPD is an optional simplified registration scheme for compliant herbal medicines. It was the UK government’s decision to revoke Section 12(2) of the 1968 Medicines Act that actually caused this loss of freedom.

Also ignored in this report, is the zealous and current efforts by the UK medicines regulator, the MHRA, to challenge products with long histories of use as food supplements when they have been awarded licenses under the THMPD scheme. This is despite, in many cases, long histories of their sale in the UK and elswehere in the EU, as food supplements.

Professor Walker does however recognise in his report that the THMPD is actually not suitable for non-Western herbal traditions practicing in Europe, including Ayurveda and TCM, traditions for which it was originally intended. Let’s not forget this fatal problem was recognised even by the European Commission as early as 2008, yet it also has been unable to deliver any kind of a solution as yet.

Professor Walker’s report offers no quick fixes for herbalists’ access to herbs, either. He acknowledges that many herbal products fall outside the scope of the THMPD, and that there are those who have “called” for a challenge of the directive.  He suggests that in the longer term “the UK government may wish to invite the European Commission to review the operation of the Herbal Directive” but this my prove somewhat awkward given the central role played by the MHRA in developing the final form of the THMPD.

In the meantime, his key recommendations include that “the government should consider the feasibility of a systematic review of herbal ingredients, drawing on existing legal frameworks with a view to amending current lists of known potent or toxic herbs, where sufficient safety concerns are raised”, that the MHRA, Department of Health and/or other relevant government agencies “should review the food lists currently in development and consider whether these could be used to assist the UK’s assessment of the status of herbal products”, and that the government “should consider further the idea of a system that would allow small scale assembly of products off-site on a named patient basis using a ‘dispensary’ type approach”. It comes as no surprise really that the UK government, doubtless under pressure from EC institutions, the media, skeptics, and in the run-up to a general election, would do anything other than further drag its feet on herbal issues.

Could food supplements be the saviour?

Professor Walker also considered the various debates held by the working group on whether a more permissive UK stance on food supplements may provide herbalists with greater access to products. This is after all is a common approach in many other EU member states, hence the development of the PlantLIBRA project and increasing interest in the draft BELFRIT list.

But, again, the door is closed on this option almost as quickly as it is opened. Prof Walker argues that food supplements is not a category of much relevance to herbalists given most products herbalists are interested in using would “clearly fall under the definition of a medicinal product.” He fails to say that any food ingredient with therapeutic properties would equally be classified as a medicine given the bizarrely broad scope of the definition.

The off-site dispensary approach alluded to as a possible recommendation for further investigation could present one herbalists with significantly more options to access products and it potentially parallels the compounding pharmacy model used widely in the USA. But the report also makes clear there would need to be a lot of work to find a proper legal foothold for such an approach, that didn’t conflict with EU laws or existing services offered by existing UK pharmacies.

The UK government had earlier also dashed herbalist hopes that Article 5.1 of the EU Human Medicinal Products Directive (2001/83/EC) would provide an exemption for their use of unlicensed herbal medicinal products, as ‘authorised health-care professionals’, through SR. This clause was to allow ‘special’ prescribing of unlicensed medicines to named patients, by medical doctors and pharmacists. But a European Court of Justice (ECJ) judgment in a European Commission (EC) against Poland made it clear that Article 5.1 is to be strictly interpreted and applied only in exceptional circumstances.

That leaves UK herbalists where they've been for years, with the rather weakly worded exemption in Regulation 3(6) of the 2012 Human Medicines Regulations that in turn replaced Section 12(1) of the 1968 Medicines Act.

The report is simply advice, so no action can be taken until a government acts. What's for sure, is that even with all recommendations accepted, there will simply be agreement to do more work to eveluate the 'best' way of further regulating herbalism. Alternatively, it could be seen to be playing a political game: on one hand the herbal sector gets to feel it's being listened to, and on the other hand, mainstream medical interests that have long been down on herbalism needn't worry that herbalism will be granted a seat at the top table of healthcare.

We'll keep you posted as and when there are actions on this issue which might be relevant.

Progress for UK herbal practitioners: Do the best things come to those who wait?