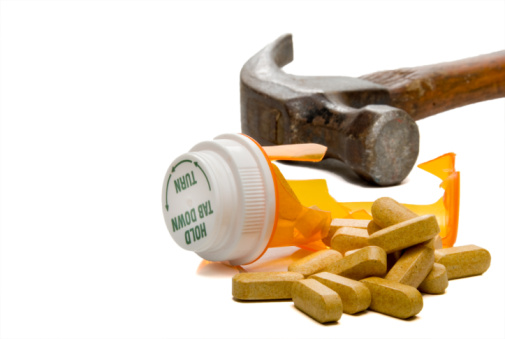 New vitamin bashing headlines this week, once again linking dietary supplements with cancer, seem strangely familiar. It appears that old studies are once again forming the basis of another new meta-analysis (‘study of studies’), with the usual accompanying advice to discard them or at least be very cautious about using them. The ‘new’ research is nothing more than a meta-analysis headed by Dr Tim Byers, a cancer doctor, University of Colorado researcher, and a director of the American Association for Cancer Research (AACR) that reconsiders 12 cherry-picked studies over the last 20 years, involving around 300,000 people. As yet apparently unpublished, the research was presented at a forum which formed part of the AACR Annual Meeting 2015 in Philadelphia. The AACR meeting is a very large, high tech gathering of presenters, early-career and established researchers, clinicians, advocates and media from all around the world. What better place to launch the latest attack on supplements, accompanied with a call for even more regulation? 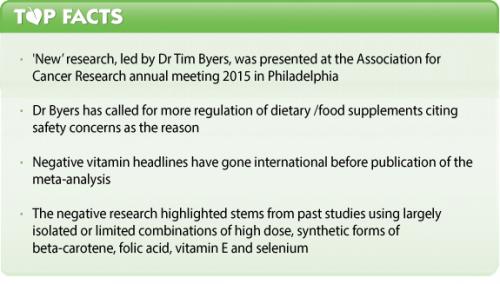 Until the research is published, we will have to hold off giving detailed comments. But it is immediately obvious that problematic studies with high dose, synthetic and isolated or very limited combinations of beta-carotene, vitamin E, selenium and folic acid form the basis of the meta-analysis. In short, it looks decidedly like the same old stuff has been dressed up and regurgitated — again.

Byers uses as yet unpublished study to call for tighter regulation

Dr Byers took the opportunity to tell CBS News "There's enough evidence along these lines that we should really consider better regulation of these nutritional supplements…..I think it's time to step back and say there's probably a safety issue."

The University of Colorado press release briefly mentioned that one trial explored the effects of “beta carotene supplements” and increased “risk of developing both lung cancer and heart disease”. This indicates that the new research was likely to be referring to part of the mainstay of vitamin bashing fodder, as found in the CARET and ATBC trials of the 1990s. As we have often explained, it is recognised that, taken at high doses, synthetic beta-Carotene may increase the risk of lung cancer among smokers and asbestos workers at high risk of lung cancer.

The press release also mentioned folic acid and an increased number of colonic polyps —the link is well-known amongst nutritional researchers, and ANH-Intl have written in detail about the science and key importance of natural forms of folate, and about the potential risks of food fortification with folic acid —the synthetic form. Interestingly, Dr Byer’s research in 2013 has looked at problems with very high intakes of folic acid, but he does not discuss the fact these issues are completely absent when food forms or polyglutamic forms of folate are consumed. Let’s not also forget the immense benefits.

Also coming out of the AACR annual meeting is reference to the association which emerged last year between vitamin E and prostate cancer, and a link between selenium and skin cancer. No surprises then that getting the public to worry about elevating their selenium status might actually increase their overall risk of cancer given a considerable body of evidence showing selenium’s cancer protective effects.

Nutrition guidelines in relation to cancer

Dr Byers has a particular interest in diet and nutrition in relation to cancer. He has researched the subject for over two decades and has helped develop the AACR guidelines on nutrition and physical activity for cancer prevention. It’s a concern that these include recommendations for the consumption of sugar, grains inluding wheat, concentrated fruit juice and low fat. Even some of Dr Byers’ own research has indicated a clear link between cancer and carbohydrates.

Dr Byers appears to have seen the option to give supplements a double kicking: once before his meta-analysis has been released, and presumably a second, after it’s published. If his message was intended to be of genuine benefit to the public, we’d applaud him. Using old studies or studies with limited relevance to the average consumer, and attempting to damage the reputation of products that provide a wealth of nutrients that an increasing sector of the population are deficient in, is quite another thing.

Getting back on track

A starting point for health is following our guidelines in our Food4Health plate. Yes, and it recommends regular use of concentrated forms of nutrients, be they fresh herbs and spices or supplements.