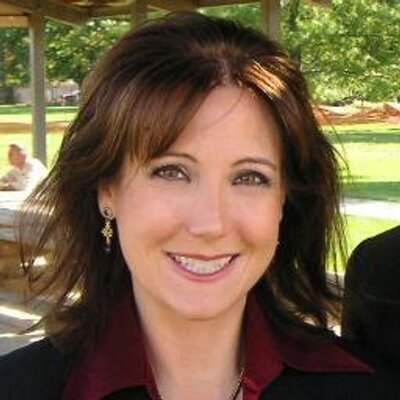 B12 deficiency expert calls for urgent changes in healthcare provision

US expert, Sally Pacholok, presents on rampant B12 deficiency and misdiagnosis in mainstream healthcare

“B12 deficiency is the most misunderstood, ignored and costly epidemic costing billions of healthcare dollars. It causes debilitating health, anaemia, intellectual disabilities in children, mental illness, cognitive decline, fall-related trauma, and it can cause premature death”. Sally Pacholok RN.

Practising emergency room nurse, Sally Pacholok RN BSN, self-diagnosed a vitamin B12 deficiency at age 22 after doctors failed to identify her condition. Working as a nurse, she began to see similar symptoms among the patients she cared for, and was deeply concerned that doctors were misdiagnosing the deficiency. Her many attempts to intervene and educate the clinicians around her fell on deaf ears. Hence, she resolved to create an awareness campaign about what appears to be an increasingly common condition. She has since presented at numerous conferences and co-authored 2 books with osteopath Jeffrey Stuart DO. The books inspired film producer Elissa Leonard to produce a documentary on misdiagnosed B12 deficiency and a film based on Sally’s life. 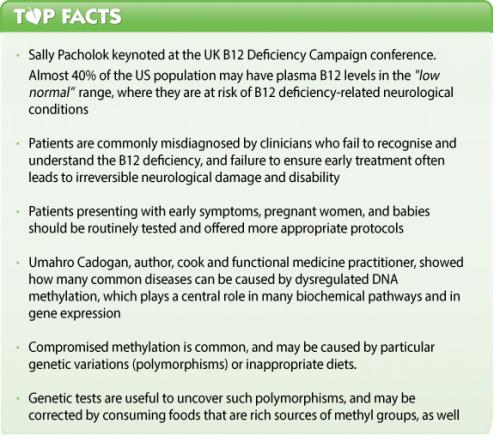 Last Saturday saw Sally keynoting at the UK B12 Deficiency campaign conference, alongside Umahro Cadogan, an expert in nutrition, functional medicine, and others. Organised by Tracey Witty and held at Loughborough University, the conference was aimed at both health professionals and patients. Yvonne England from ANH-Intl was there to bring you an account of the keynote presentations.

Vitamin B12 or cobalamin is essential for the development and maintenance of a healthy brain and nervous system. It’s necessary for red blood cell production and for DNA synthesis, being key for methylation and the metabolism of folate, homocysteine, and methylmalonyl coenzyme A. B12 is only found in foods of animal origin, i.e. meat, fish, shellfish, poultry, dairy products, and eggs. Vegans and vegetarians require additional B12 supplements to avoid deficiency symptoms. The absorption of B12 is a complex process involving numerous organs, co factors and biochemical steps. In brief, vitamin B12 binding protein is produced by the salivary glands and stomach parietal cells. Hydrochloric acid and pepsin begin the breakdown in the stomach with pancreatic enzymes and intrinsic factor, produced by the parietal cells, then acting on the released B12 in the small intestine. Receptors in the distal ileum (end of the small intestine) are also involved in absorption. Once in the blood, specific proteins (transcobalamin 2) shunt the active B12 to cells and organs. Problems at any of these steps can lead to malabsorption and subsequent deficiency. Yet deficiency of B12 is still poorly recognised by mainstream medicine.

The US Centers for Disease Control (CDC) tell us ‘Research studies and clinical laboratories have tended to dichotomize low values [serum B12 levels] at 200 picograms per milliliter (pg/mL)”). They warn that “Accepted lower limits of serum B12 levels in adults range between 170 and 250 pg/ml; however, higher levels (but less than 350 pg/ml) have been recorded in 15% of ostensibly healthy elderly patients with other findings suggestive of a deficiency state… the true lower limits of normal serum B12 would therefore appear to be somewhat poorly defined”. Sally Pacholok stressed that on both sides of the Atlantic mainstream clinicians are using too low reference ranges and missing many deficiency cases.

In the UK, B12 serum levels are measured in nanograms per litre (ng/L) with reference ranges starting as low as <110 in some parts of the UK to 900 ng/L. With a growing number of people becoming vegan/vegetarian, added to the concerns that folic acid food fortification interferes with accurate B12 deficiency diagnosis, many patients are slipping through the net.

Tufts University suggests that as much as 39% of the US population is at risk of B12 deficiency-related neurological conditions with serum B12 levels below 350 ng/L. Nine percent were in the recognised deficiency range, but given that 500 ng/L or higher is more reflective of an optimal level, numbers could be far higher. 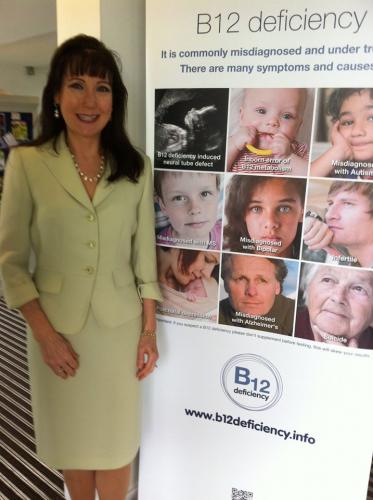 In Sally’s experience, the first symptom is typically depression, and therefore anti-depressants should not be prescribed without first ruling out other causes. She urges that patients presenting with mental illness, foggy thinking, forgetfulness, numbness and tingling in limbs should be tested to rule out B12 deficiency, and orthopaedic clinicians should test those who have had falls. Deficiency symptoms are many and include neurologic, psychiatric and blood-related symptoms.

In babies, B12 deficiency manifests slightly differently, typically as developmental delay, regression, failure to thrive, tremors and seizures. B12 is critical in the first 2 years of life, and so pregnant women and young babies need to be routinely screened. Untreated infants can develop permanent B12 deficient acquired brain injury, with permanent intellectual disabilities. Older children with learning difficulties, mental health problems and fatigue should also be tested.

Neurological manifestations commonly occur in patients before clinicians recognise that B12 concentrations are too low, and damage may be irreversible if treatment is delayed. It’s a sad fact that clinicians will send patients to a neurologist rather than test for serum B12 levels as a first step. However, misdiagnosis as bi-polar disorder, multiple sclerosis, Alzheimer’s, chronic fatigue syndrome and fibromyalgia is common. Symptoms are also often mistaken for normal signs of ageing. In young children it masquerades as autism and cerebral palsy. The treatment costs of some of these conditions — drugs, medical costs and even care costs, far exceeds the very cheap cost of B12 injections. MS drugs alone cost over 30 thousand dollars a year, whilst “the lifetime cost of care for an autistic child is estimated to be 3.2 million dollars”.

Sally’s presentation ended with a discussion on the benefits of B12 injections, but explained that there were typically inappropriate intervals between them — one month in the US, and as much as 3 months in UK. According to Sally Pacholok, “An oral dose of 1000 mcg per day is equivalent to an injection, so it makes no sense to give an injection every 3 months”. Patients need to be taught how to self-inject, and some may need injections every 10-14 days.

In the UK, cyanocobalamin is often used supplementally, although methylcobalamin (e.g. as 5000 mcg lozenges) is the preferred form. Hydroxocobalamin is suitable for injection, is available on the NHS, and is easily converted to active B12 forms, does not depend on intestinal absorption (that can be poor or variable). The methionine synthase reductase (MTRR) A66G polymorphism is an important polymorphism affecting conversion to methylcobalamin and can require high levels of injection or supplementation.

It should be recognised that many, but not all the symptoms of B12 deficiency listed above, such as depression and memory, tend to improve with B12 injections. The treatment outcome usually depends on how long the patient has been ill, age, and other aspects of health. 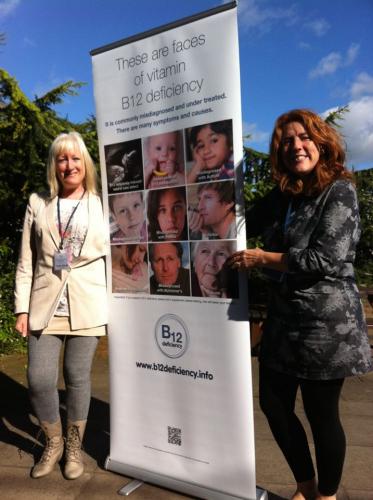 Vitamin B12 Call to Action

Further reading on vitamin B12 deficiency

Umahro Cadogan, Adjunct Professor, University of Western States (Oregon, USA), author, cook and functional medicine practitioner, delivered a spellbinding lecture on the importance of DNA methylation. Umahro is a good friend of ours at ANH-Intl and has presented training courses in our office, targeting European healthcare professionals who wish to offer tests on the status of polymorphisms affecting around 60 genes, carried out by Nordic Laboratories. Each of these polymorphisms, even if potentially adverse, can be largely remedied by changes to diet and lifestyle.

Umahro showed how a health professional must develop an epigenetic perspective of an individual’s life if he or she is to help the person maintain vibrant health into old age, or resolve a wide range of chronic health challenges. Methylation, the process by which methyl (CH3) groups, are attached to DNA, along with histone modification (including histone methylation) of the central chromatin ‘spools’ around which DNA wraps, plays a central role over our physiology and biochemistry. It also is a key control mechanism regulating how genes are expressed or silenced.

Disordered methylation is at the root of a catalogue of diseases over which allopathic medicine has had limited success managing. These diseases include cardiovascular disease, cancer, type 2 diabetes, neurological conditions such as Alzheimer’s disease, autistic spectrum disorders, chronic fatigue syndrome, mood disorders, accelerated aging – to name a few.

While there are certain foods that are rich methyl donors, such as onions, garlic and beets, these do not make up a significant part of most people’s diets. Humans typically ingest about 50 mmol of methyl groups per day, about 60% of these being derived from choline. Eggs, broccoli, cauliflower, lecithin, tofu and beef liver are particularly rich sources of choline.

Umahro stressed that more is not always better. A low supply of methyl groups can prevent the down-regulation of certain genes, which can be useful in reducing cancer cell proliferation or certain forms of inflammation. However, excessive methylation can silence genes, and there are suggestions this may play a role in some forms of autism.

Two themes recurred in Umahro’s presentation: one was the need to understand polymorphisms affecting methylation in a given individual, using genetic tests that are now readily available to forward-thinking health professionals; the second is the need to monitor markers of methylation, such as homocysteine, folate, vitamin B12, vitamin B6, taurine, N-acetyl-cysteine, and betaine.

In terms of resolving disruptions in methylation, a food first approach was strongly advised. This might include an increased consumption of methyl donor foods, such as eggs, onions, garlic, spinach, broccoli, legumes, organ meats and fermented foods. But a powerful case was made for supplements, including betaine, SAMe, methylfolate (bioactive, methylated folate) and methylcobalamin (methylated B12). While SAM is a universal methyl donor, and SAMe has been shown to be highly effective in trials for various health problems including arthritis, hepatic problems, hormonal problems and various psychiatric problems, Umahro referred to it as a “double-edge sword”. Too much can yield ‘hypermethylation’ which can cause serious neurological issues especially in psychiatric patients, possibly owing to the excessive formation or removal of neurotransmitters. As is so often the case, careful monitoring and adjustment of dietary intakes is almost always called for.