Home News Brexit and natural health - what next?

Brexit and natural health - what next?

The many reactions to Brexit, both in the UK and the rest of the world, continue to reverberate. Among the most surprising to us are the regrets voiced by some who voted ‘Leave’ yet are now regretting their vote. Referendums typically are held to decide on major constitutional issues, and that’s just what the 23 June referendum represented for the British people.

At ANH-Intl, we have been closely involved with EU and national laws affecting natural products for nearly 15 years. We have also long worked to influence these laws, especially those that contribute to excessive restrictions on individual freedoms and liberties and our consequent ability as citizens to manage our health through natural means. Additionally, our consultancy arm has also helped to keep many natural products on the market, and we’ve helped a large number of practitioners negotiate the complex minefield of EU and national laws. Drawing on all of this background, we provide here a summary analysis of what we consider to be among the key issues facing the UK from standpoint of UK consumers, UK businesses and non-UK businesses trading in the UK – as far as they relate to natural health.

We’ve decided to do this as a SWOT analysis, and so have taken into account what we see as among the clearest Strengths, Weaknesses, Opportunities and Threats that face natural health in the UK now that the country has decided to terminate its membership of the EU. Loosely, the strengths and weaknesses relate more to internal factors within the UK, and opportunities and threats relate more to external factors outside the UK. As with any SWOT methodology, the goal must be defined. Ours reflects ANH-Intl's mission and so is to ensure that citizens, in this case within the UK, are able to optimise their wellbeing and quality of life by increasing their adoption of viable and sustainable healthcare strategies based on natural means following the UK's exit from the EU. 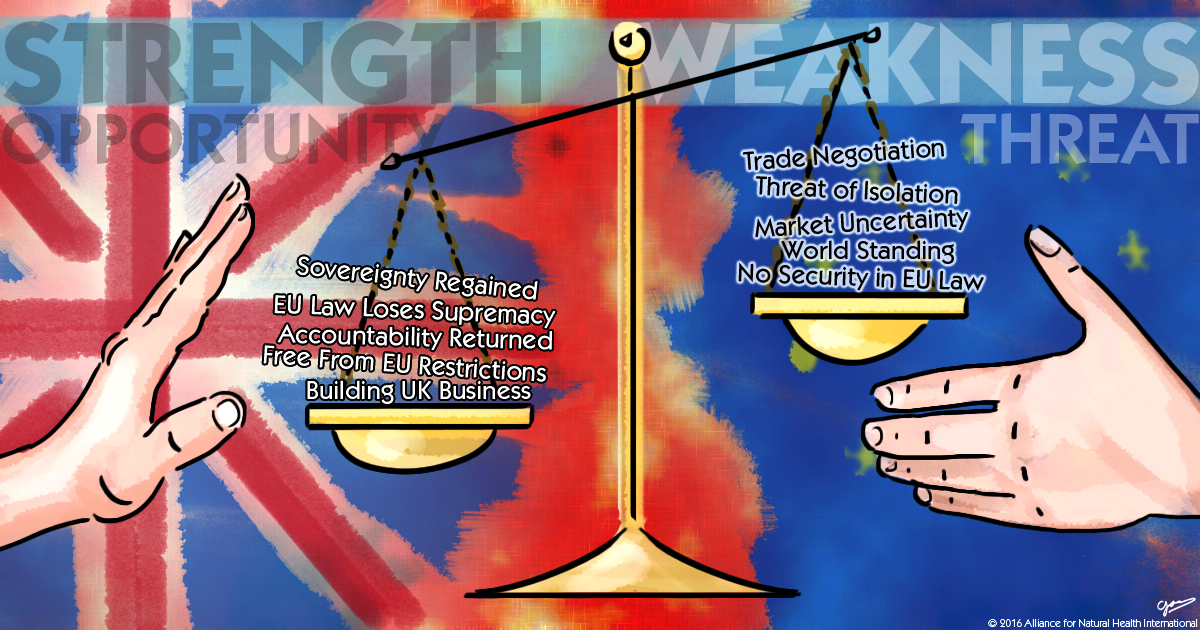 Heads down, not in the sand

Two things are difficult to deny: the first is that the real work remains ahead. It will start in earnest when current prime minister David Cameron steps down and a new leadership of the Conservative party capable of leading the UK’s exit from the EU is appointed in around 3 months time. The second thing we cannot ignore is that uncertainty is guaranteed unless the UK people, and its various trade sectors, work together in a cohesive manner. This will require many of those who are currently still reeling from the decision of the UK people to take stock and contribute, pro-actively, to the creation of a new UK freed from the shackles of the EU.

At the ANH-Intl, we will be taking a much more active part in the political process in the UK, while not downgrading our involvement at the EU level where we will continue to support citizens and natural health interests in the remaining 27 EU member states. With your help and support, we hope we can work effectively together to help create the best possible future for natural health and all its various interests and — above all — the consumer.

We hope our SWOT analysis provides some sort of a marker that relates Brexit to natural health. As with any summary analysis, we’ve left out more than we’ve included. But we hope those issues we have included, in each of the four areas of the SWOT analysis, may be helpful in guiding both consumer and natural health trade strategies in the coming months.

Downloadable version of this SWOT Analysis.

Many of the issues we raise in the SWOT analysis above have highly variable and indeterminate time frames. We've chosen to not second guess what these might be as there are so many things that might or might not happen, many in turn dependent on the nature and sequence of events that occur once Article 50 of the Lisbon Treaty has been invoked, in around 3 months time. This will include who is will succeed David Cameron, what support he or she has within and outside the Conservative party, including internationally, and who will be negotiating trade deals, in whose interests. There's even a possibility that the referendum result might be ignored entirely.

The post-Article 50 process will not be plain sailing. Far from it. But it behoves all of the UK to come together to create the best future for the nation, one that embraces some of the key elements that defined Britain's contribution to the world's dominant economic, trade, justice and, above all, democratic systems.

The best future for natural health in the UK will be gained by us moving forward with as much information available to us as possible, wide-eyed and open-minded. In this way, the UK can create its new destiny, maximising the undeniable strengths and opportunities of the situation the majority of its population has opted for, while being mindful of the weaknesses and threats.

Please circulate this article widely to your friends, family members and contacts in the UK who have interests in natural health and its future following Brexit. You'll find share icons for social media to the left of this story.