Some of the greatest breakthroughs in medicine have come from medical mavericks, doctors who don’t take at face value everything they learned at medical school or from journal articles or medical conferences. They also don’t function well if constrained by the guidelines (which end up acting more as rules) issued by their medical boards.

At ANH-Intl, we’ve had the good fortune to get to know Dr Robin Willcourt well over the last couple of years. During our visit to Australia, Rob Verkerk and Meleni Aldridge lectured alongside Robin and met him again in his present hometown, Melbourne, where he visited us at the Australasian Lifestyle Medicine 2016 conference. Robin is definitely a maverick, but he’s also a good doctor with over 40 years of experience. His book, Chasing Antelopes, is essential reading. But to whet your appetite, we asked Robin if he’d care to offer us a short piece summarising some of his main concerns about the current direction of medicine, the subject of the first chapter of his book. Over to Robin…

My book ‘Chasing Antelopes’ is about exposing the monumental corruption that is endemic in the organizations we have trusted to protect our health and well-being: the pharmaceutical, food and the ‘medical’ industries. For many of you ‘Chasing Antelopes’ is going to be disarming. That is intentional. I have not tried to be controversial for the sake of an argument, but rather I want you to see how we are being manipulated by governments and industry giants: to swallow the ‘opium pill’ and to sink into a state of blunted unquestioning consciousness about so many health and environmental issues and to accept that so much of what we have been told to believe about our health and many other facets of our lives is true, when it is in fact, malignant rubbish.

Over time and with a long career in Medicine, I became disturbed – no, make that disgusted – that the medical profession had fallen for one of the greatest cons in medical history: that an elevated blood level of cholesterol causes heart disease. I became alarmed at the increasing resistance of the medical profession to new ideas as the institutionalization of medical dogma, proclaimed by paid experts took hold. As a result, Medicine today barely escapes the definition of being a racket. The writing of this book was driven by the frustration at seeing the once vibrant curiosity and willingness to try out new ideas for disorders that didn’t fit stock standard criteria become senile and fossilized and therefore ignored, or worse, actively stamped out.

As it turns out, not much of what you have been told about your health and how to optimize it is entirely accurate and it begs the questions: why do so many people begin ‘accumulating’ more and more disorders as they age and why aren’t we applying our diminishing healthcare resources to refine and discover commonsense prevention schemes which are cheaper and far more effective than trying to repair broken bodies?

Other forces over which we have no control are also in play and therein lies the potential for wiping out the entire Human Race.

The powerful drug companies’ persistent nightmare is that cures for chronic illnesses will suddenly appear. After all, cures for the last four decades’ epidemic of chronic diseases would cut off Big Pharma’s sources of recurring and endless revenue streams: streams that appear only to be limited by the number of illnesses people on this planet can be afflicted with without actually killing them. The drug companies’ mantra is simple: ‘keep them sick but keep them alive.’ Exceptionally, a real effort to deal with and find a cure for the Ebola virus epidemic mysteriously appeared out of thin air after decades of ignoring that virus’ potential to cause global mayhem. Death on such a large scale as might occur with such a virus pandemic is revenue inhibiting to say the least, let alone quite confronting when it suddenly turns up on your own doorstep.

In 1883 William Osler, one of the world’s greatest physicians, projected a prevalence of approximately two or three cases of diabetes per 100,000 population in Europe and North America but by 2014 approximately 10% of the US adult population had type 2 diabetes.

That meant that there were about 10,000 mostly Type 1 diabetics in the whole world at the time of Osler’s calculations. That translates into a projected prevalence of about 45,000 in the first decade of the 21st century. But the calculated total in the world today is about 370 million, 90% of whom are Type 2 diabetics. How could this happen without news headlines trumpeting this fact every day? Meanwhile, the number of people living with HIV/AIDS was 35 million in 2012. This fact has been brought to everyone’s attention appropriately, but the equivalent lack of horror about the prevalence of Type 2 diabetes is curious, to say the least.

Diabetes and its complications, affecting 29 million Americans in a population of about 330 million, cost the US taxpayer $245 billion dollars in 2012, while HIV/AIDS cost that country about $23 billion, for 1.1 million infected individuals. The world will soon have over half a billion people with diabetes. Yet, one hears little more than lip service being paid to the catastrophe that results from the skyrocketing global diabetes’ rates and the associated medical costs and the loss of quality of life. Why is that?

Diabetes is a big business, making enormous profits for both the food and drug industries, one creating the epidemic and the other offering medications to fix it: and once those two behemoths get into lock step, look out. Add this to the ‘cholesterol-causes-disease’ fiasco that has delivered a bonanza to the drug and food industries, and you have the perfect storm.

It is a sad state of affairs when one considers this fact: doctors are the third leading cause of death in the First World.

Evidence Based Medicine has now morphed into Eminence Based Medicine in which the faithful are expected, nay, obligated, to follow dogmatic guidelines laid down by seemingly God-inspired experts, and those who question their belief systems are subjected to Inquisition-like hearings before medical boards, often being denied their rights to defend themselves with what should be unquestioned rights of free speech and expression, while being derided by their detractors as ‘charlatans, deniers and killers.’

I believe that most doctors accept the same ideals laid out by over two thousand years of extraordinary practitioners of Medicine but by having to rely on industrial propaganda from the drug and food companies rather than honest data derived from independent studies. They have in effect become part of the web that has defrauded the public and they now act as unwitting tellers in the transactions of these disinformation ‘banks’.

Doctors appear to be ever right when their actions are considered at a specific point in time. But by focusing the lens of time and looking backwards, we consistently become aware that over much of the time, doctors have been misinformed or wrong about the treatments they employ. Most doctors accept the ideals laid out by over two thousand years of extraordinary practitioners of medicine, but by having to rely on industrial propaganda from the drug and food companies rather than honest data from independent studies, they have now become part of the web of disinformation that has defrauded the public.

The public needs to know about the facts that underlie and drive the most common diseases from which we suffer, so that it can take charge and make intelligent decisions regarding its medical care and thus, its wellbeing.

The volume of disinformation taught to our medical students and practicing doctors, promoted at major scientific medical conferences around the world, is almost incomprehensible given that there is Internet access to colossal amounts of data, from which authentic material could be discovered. Yet, that modern medium of knowledge, the Internet, is being used just as effectively to propagate incorrect information as much as it is for factual material.

I want to be able to animate you to action by reading about the wonder of us – Humans – and what has shaped us to become the amazing creatures we are and why it is so heart-breaking to see us being led to our destruction by nothing more than greed and ill-formed thinking.

At least if an asteroid were to take us out, it would feel better than knowing that people of our own kind are, with cynical calculation, achieving the same thing and that we are unwittingly, even eagerly, participating in our own downfall. 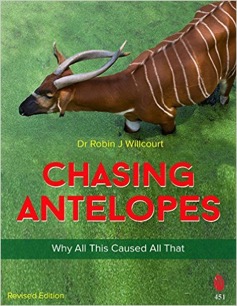 Chasing Antelopes is about how we manage our lives and our health in the modern world in the face of strong institutions, including the medical profession and big pharma. And, it is also about the role played by academic research in our lives, and just how coherent and robust this research sometimes actually is. The author, Robin J. Willcourt, is a leading anti-aging expert currently residing in Australia. He has had a long and illustrious career, in both the USA and Australia, as a medical doctor specializing in obstetrics and gynecology. In Chasing Antelopes, to illustrate what is really going on and to explain why all this caused all that, the author explores current, relevant and sometimes controversial topics including evolution, the human genome, obesity, cholesterol, the Paleolithic diet, hormones, sex (between humans and between certain chimpanzees), the ice age, and global warming. For example, current medical practice says that if you don t sleep well, or if you have a low sex drive, or if you are feeling a little off color, you must be depressed and therefore need to take anti-depressants. Frustrated at seeing mankind’s once vibrant curiosity and willingness to question potentially misguided thinking virtually stamped out, Robin J. Willcourt, in Chasing Antelopes, takes us on a journey using fully documented sources and peer reviewed published academic research that challenges our thinking and encourages us to adopt new strategies to better manage our own well-being.

Chasing Antelopes: Why All This Caused All That is available to purchase from Amazon.com and Amazon.co.uk