Home News Taking the spice out of German Christmas 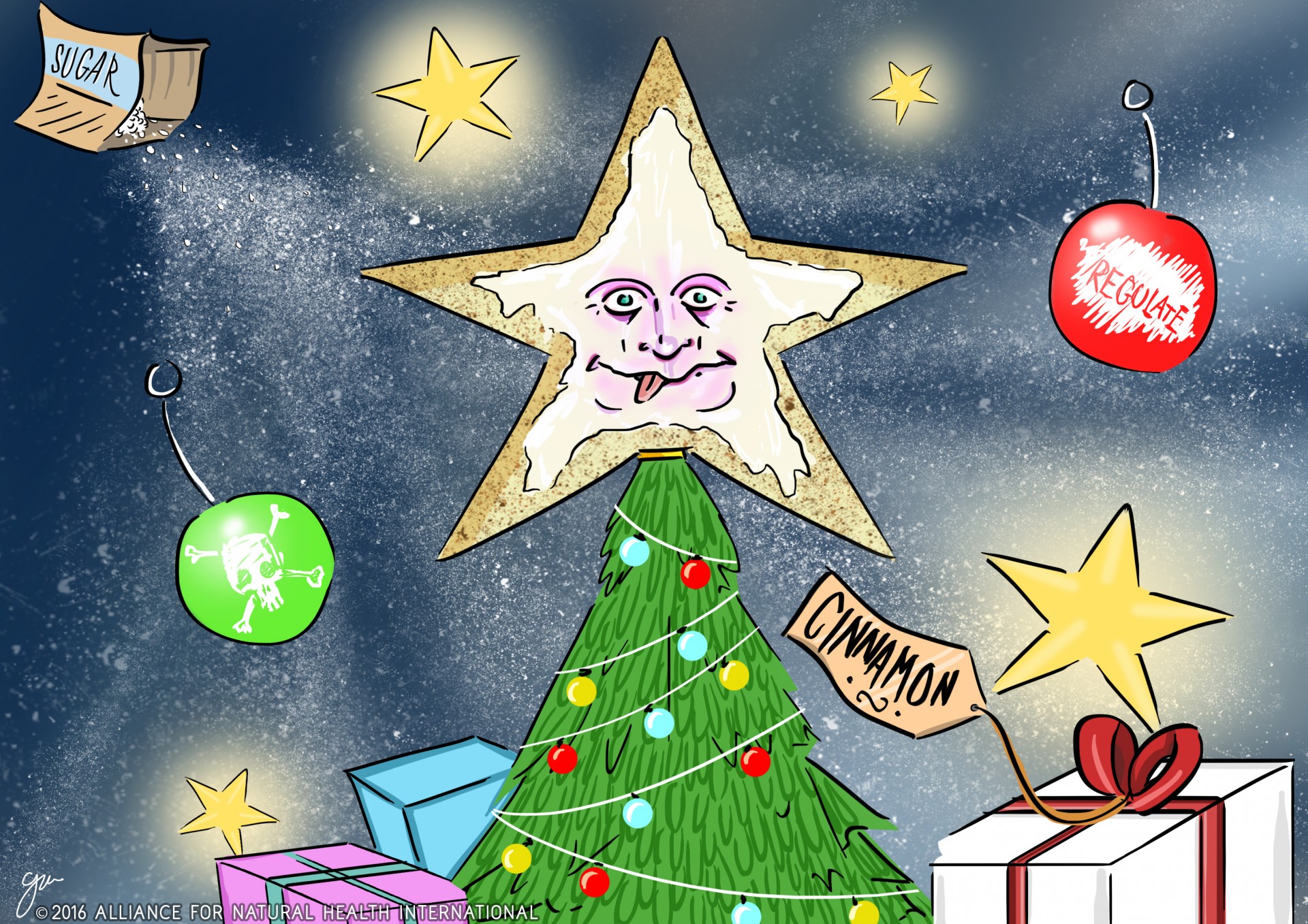 Taking the spice out of German Christmas

As Germany prepares for Christmas, fears are circulating about the potential dangers of consuming too much of one of the most important seasonal spices: cinnamon. Newspapers have carried many stories about the risks, based on communications stemming from local and health authorities, including the highly cautious Federal Institute for Risk Assessment (BfR) which has flagged concerns about coumarin in cinnamon for over a decade.

What you won't read in the papers is the draconian action we've been made aware of by German enforcement teams from local authorities. Cinnamon-containing foods, including herbal teas, are being pulled off the shelves and recalled from consumers. This is, in our view, a massive over-reaction caused by a flagrant misrepresentation of the available science.

The decision to issue warnings and recall cinnamon products by food control authorities in Germany is entirely arbitrary, both scientifically and legally. The European Food Safety Authority (EFSA) set, back in 2004, a Tolerable Daily Intake (TDI) for coumarin, one of the constituents of cinnamon, of 0.1 mg per kg of body weight. The TDI is essentially the amount considered safe for everyone over a lifetime. In 2008, EFSA re-evaluated its own opinion and didn’t change the TDI.

The TDI would limit a 60 kg adult to 6 mg total coumarins/day. Put simply, this level is at best a stab in the dark, being based on uncertain data taken mainly from animal studies using synthetic coumarin, not natural coumarins and the hundreds of other components with which it is associated in cinnamon. Rats and mice react quite differently to coumarin compared with humans. Despite unfounded fears to the contrary, EFSA’s 2008 opinion did however confirm that naturally-derived coumarins don’t pose a carcinogenic risk in humans and recognised that the very large safety margin used in determining the TDI meant that “an intake 3 times higher than the TDI for one to two weeks is not of safety concern”.

Emphasising EFSA’s excessively low TDI is a comprehensive study of foods in Denmark which shows that over half the common foods labelled with cinnamon exceeded the TDI. These foods were primarily in the traditional, seasonal and fine bakery categories. A German study by Abraham et al found that many foods containing cinnamon might achieve the TDI.

Too much – or over-cautious?

Regulators’ use of the TDI – which you should remember is EFSA’s agreed safe level of daily consumption over a lifetime — raises a number of important questions: what happens if you go over it, and by how much, and by whom?

We know that some people have genetic polymorphisms of the CYP2A6 enzyme which make them less able to use the 7-hydroxylation pathway to metabolise coumarin, in the process making them more vulnerable to liver toxicity from high levels of coumarin exposure. Less than 10% of the population appear to be affected by this polymorphism and it occurs in a much higher frequency among Asian, as compared with Caucasian, genotypes. This has been the primary driver for EFSA and BfR’s caution.

But to find out what’s happening, it’s always worth looking at data from the real world (e.g. observation or epidemiological data). Here one finds an incredibly low frequency of adverse events associated with coumarin exposure from foods containing cinnamon. Also, high coumarin exposure is nearly always linked to use of cassia cinnamon (Cinnamomum cassia), not the other forms, such as Ceylon cinnamon (Cinnamonum verum, formerly C. zeylanicum) that contains negligible levels.

Moreover, the EU Regulation 1334/2008 allows inclusion of cinnamon at up to 50 mg/kg in “Traditional and/or seasonal bakery ware containing a reference to cinnamon in the labelling”. Putting this into perspective, SelfNutritionData suggest a single Danish pastry might weigh 142g. Accordingly, 2 such pastries a day would deliver 14.2 mg coumarins at the maximum inclusion level, over twice the TDI for coumarin. The sugar may be a problem, but it seems unlikely the cinnamon would.

One of the reasons for such low incidence of adverse effects is likely to do with the different metabolism of coumarins found in natural foods as compared with isolated, synthetic coumarin used in many of the studies (the vast majority of which are on animals not humans, with clear, generally accepted evidence that both rats and mice, the main species used in experiments, are much more susceptible than humans). Cinnamon provides a wide range of compounds, including in which there is some knowledge of the safety profile when looked at independently (e.g. coumarin, cinnamaldehyde, safrol, styrene). It is also clear that other compounds in cinnamon, such as chromium and polyphenols, are beneficial and may have profound effects on managing insulin sensitivity.

Always being keen to roll our sleeves up and get in on the action, 5 of us in the ANH International team turned ourselves into test subjects. After measuring our fasted blood glucose when we arrived at work, we then measured how our consumption of around 150g of cinnamon stars, made on one day without cinnamon, the next day with cinnamon, affected our blood glucose levels, 60 to 120 minutes after feasting on the them! A big thank you to Melissa and Meleni for deploying their late night gluten-free (but not sugar-free) baking skills! They followed a traditional zimtsterne recipe, just leaving out the cinnamon for the first day of testing.

Although the effect of the cinnamon on blood glucose wasn’t significant statistically (probably because the sample size wasn't large enough), there was a strong suggestion that the cinnamon in the biscuits blunted our post-prandial blood-glucose response especially after 60 minutes (see Figure below). 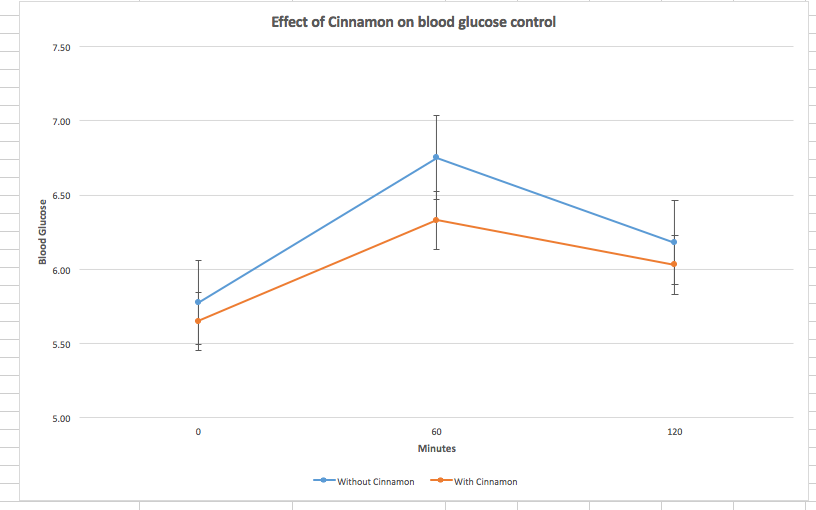 Having done this on Monday and Tuesday morning – we’re all looking for a break, not from the cinnamon, but from the sugar! It’s also more than odd that German kids are being warned, not about the sugar, but about the cinnamon in their zimtsterne! And it’s atrocious that products are being pulled from shelves in Germany because of the presence of this age-old culinary spice.

In the meantime, you’ll need no reminding that cinnamon is an extraordinary spice; have plenty of it at Christmas – and remind yourself that if you’ve indulged in sugar, there is nothing like having this spice as a herbal tea to wash it all down and help your body to re-balance your blood sugar levels. If you've got any health conditions affecting your liver, or you know you have a polymorphism affecting your CYP2A6 ennzyme, you may wish to swap out cassia cinnamon for 'true' cinnamon (C. verum). Alternatively, just take your cassia cinnamon in moderation - which is what most people do in any event!

This case highlights why a risk/benefit model, as developed through the work of ANH-Intl on vitamins and minerals, is just as urgently required for botanicals.