UK 'healthy eating' guidelines – not good enough to die for

Last week we discussed the implications of initial results from the PURE study, the largest observational study yet to examine the relationship between food composition, cardiovascular disease and mortality. We’re now saying, based on this new (and other) evidence, dietary advice from governments that continues to tell people to eat low-fat foods and get most of their daily energy from carbohydrates, is actually contributing to early disease and death, rather than preventing it.

Today we launch the start of a staged campaign, targeting various governments around the world. We're calling the campaign the ‘Balanced Science, Balanced Diet’ campaign, and we're initiating it in the UK, targeting the battle torn Secretary of State for Health, Jeremy Hunt. Mr Hunt has faced voracious criticism from many quarters for his proposed reforms to the National Health Service (NHS), most recently from the world-renowned academic and physicist, Stephen Hawking, with the support of a gaggle of influential doctors and scientists.

Much of this criticism stems from cost-cutting in the NHS amidst increasing pressure from patients and chronic, preventable diseases like heart disease, type 2 diabetes, obesity and cancer. It is therefore critically important that what governments and the NHS tells the public actually reduces rather than increases disease risk. This unfortunately cannot be said of the UK government guidance, the Eatwell Guide, even in its most recent incarnation (2016).

Our primary concerns and requests are captured in an open letter, sent earlier today to Mr Hunt, as well as the infographic below.

A copy of Rob Verkerk's open letter to Jeremy Hunt can be found at the bottom of this article and can be downloaded here.

Misinformation and myths of the Eatwell Guide 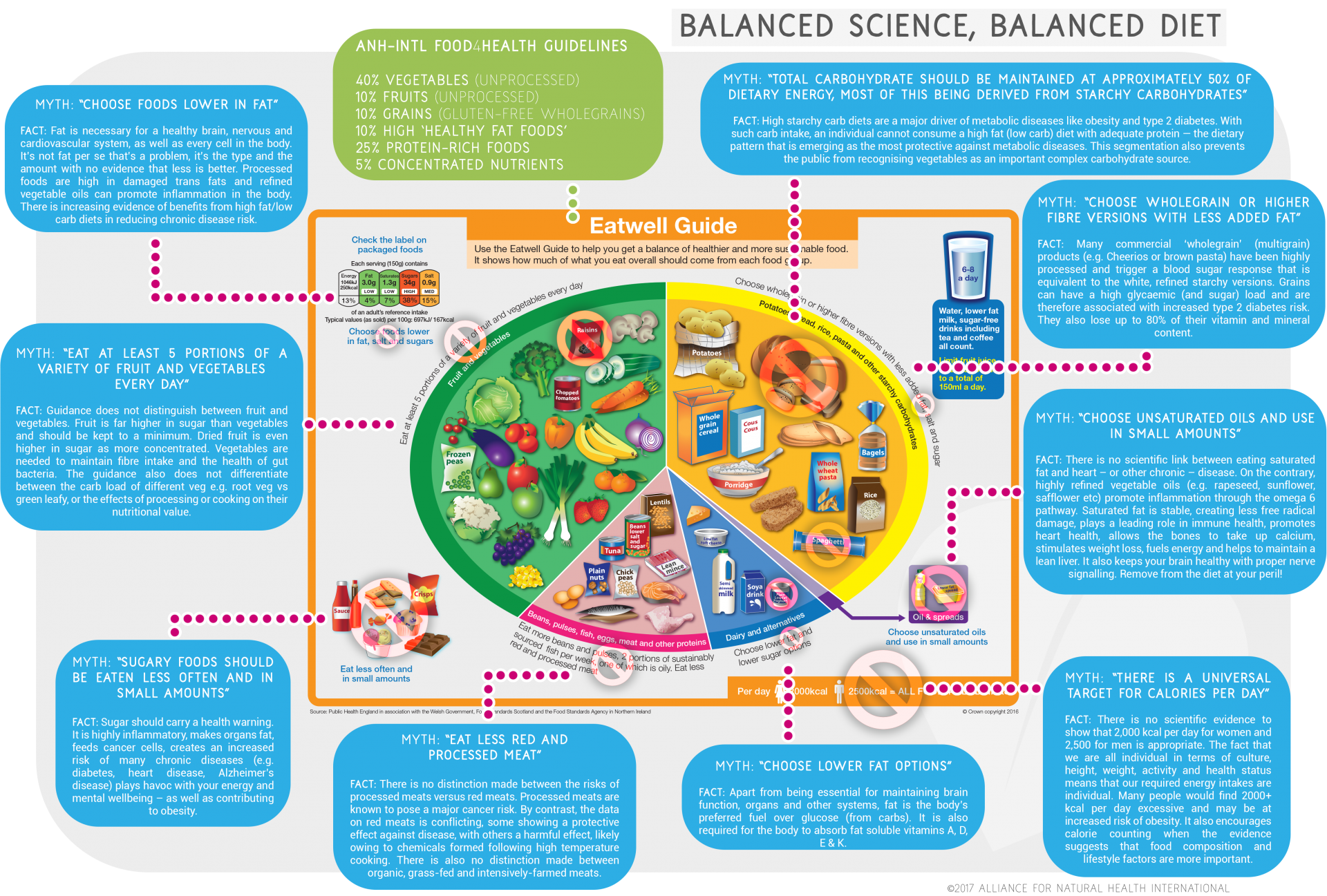 Call to Action for UK residents

British residents should contact Jeremy Hunt and Duncan Selbie and request an urgent review of the Eatwell Guide that presently is likely to contribute to higher, rather than lower, rates of heart disease, obesity and type 2 diabetes.

Contacts are as follows:

You might find it useful to link them to, or refer to, points made in our open letter and/or to our infographic.

For more information, refer to ANH-Intl’s Food4Health campaign and guidelines.

Secretary of State for Health

Re: Call for urgent review on Eatwell Guidance

You, more than most, are acutely aware that over 75% of the current disease burden on the NHS comes from largely non-communicable diseases1 that now threatens the NHS’s viability. You will also be very aware that a large part of this burden is caused by preventable diseases, such as cardiovascular disease, type 2 diabetes, cancer, chronic respiratory diseases and mental disorders, triggered, mediated or perpetuated by inappropriate dietary and lifestyle choices.

It is therefore essential that guidance provided by Government reflects the latest scientific advances, research and knowledge. A rapidly growing body of evidence now indicates that guidance provided in the newly revised Eatwell Guide (2016)2 may actually accelerate cardiovascular disease risk and all-cause (premature) mortality. The inappropriateness of this advice has come sharply into focus with last month’s publication of initial results from the PURE (Prospective Urban Rural Epidemiology) study in The Lancet3. The PURE study is the largest prospective observational (epidemiological) cohort study evaluating associations of food composition on cardiovascular disease and mortality ever undertaken, involving over 200 investigators who collected data on more than 135,000 individuals from 18 countries across five continents for an average of 7.4 years. The study emphasises the urgent need for a review of dietary advice from the UK government, including Public Health England and the NHS4.

Based on the findings from the PURE study, along with other evidence (which we are happy to furnish on request), it is untenable scientifically to make the following five healthy eating claims as per the current version of the Eatwell Guide:

The overall effect of the guidance is to continue to promote high carbohydrate and low fat diets, that have, over the last three decades, been seminal to soaring rates of obesity and type 2 diabetes6.

Furthermore, there are other deficiencies in the guidance that do not help prevent non-communicable diseases. These are briefly elaborated below:

Based on the above concerns, and on behalf of the doctors, nutritional practitioners and consumers that we represent, we request that your Department initiates an urgent review of the Eatwell Guide. It is entirely appropriate that the initial result from the PURE study should act as a trigger for this review.

While we applaud commitment to the low sugars target proposed by the Scientific Advisory Committee on Nutrition (SACN) in its report on carbohydrates in 201512, it is widely agreed that “the 5% target for energy from free sugars is unlikely to be achievable by the UK population in the near future.”13

We have written also to Duncan Selbie at Public Health England and are requesting an experts’ meeting to discuss the implications of the PURE study and other accumulating evidence that suggests that the current Eatwell Guide might give rise to consumer behaviours that increase, rather than reduce, the public’s non-communicable disease burden.

We look forward to hearing from you, especially as to whether you will initiate, based on the PURE findings, an urgent review of the Eatwell Guide.