Home News In sickness and health: is the UK NHS at breaking point? 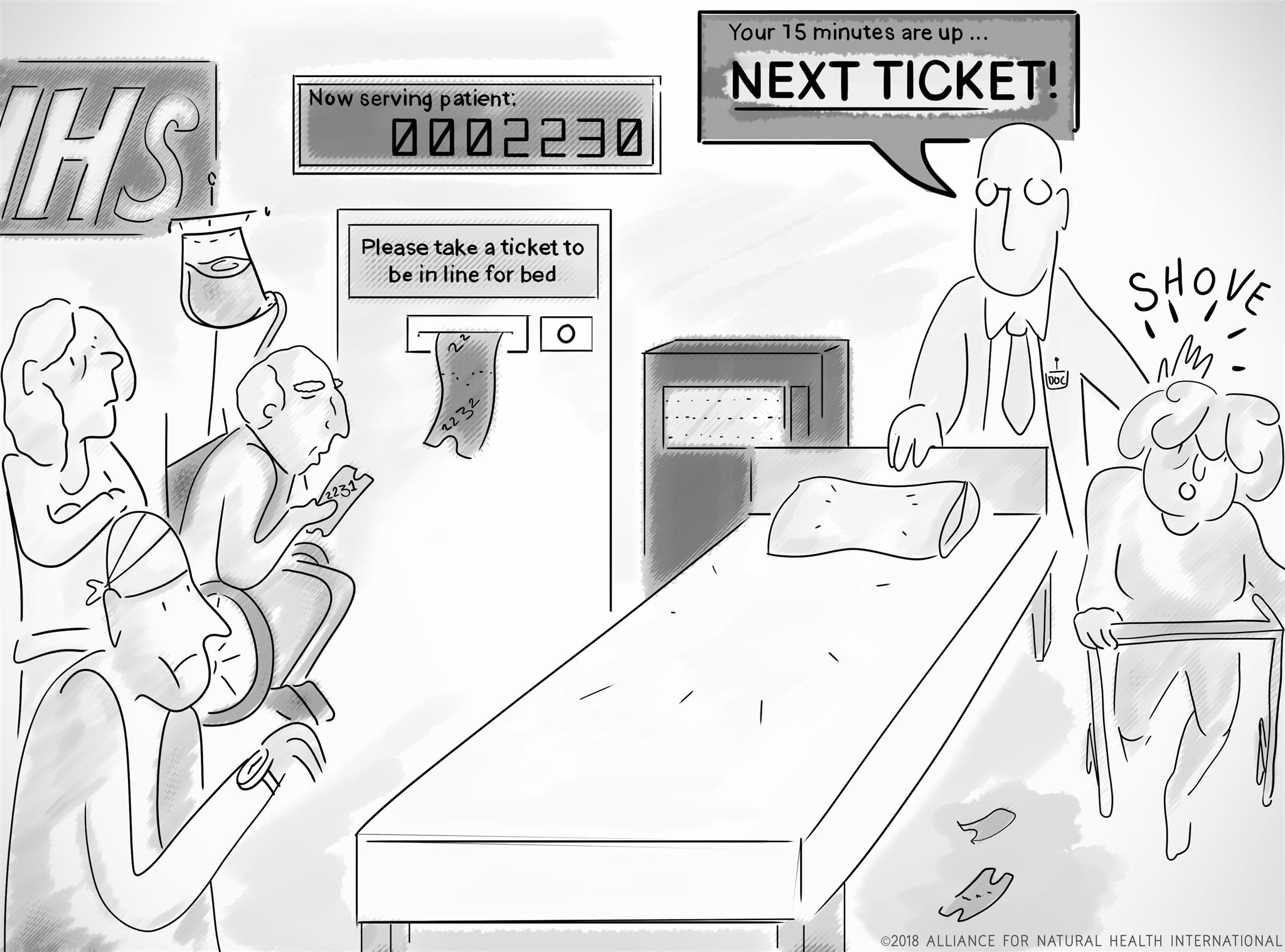 In sickness and health: is the UK NHS at breaking point?

The case for a more sustainable healthcare system in the UK

Despite spending being at record levels, the NHS is in crisis. Staff are overwhelmed and struggling to cope. Ambulances are queuing at Accident and Emergency (A&E) departments. Young and old alike are left waiting for emergency crews to reach them. The service, in multiple places, is literally at breaking point.

Fingers are being pointed at politicians, lack of staffing, lack of funding, delays in care and poor care to name but a few. What is going on? How has such an internationally respected healthcare service seemingly been brought to its knees? 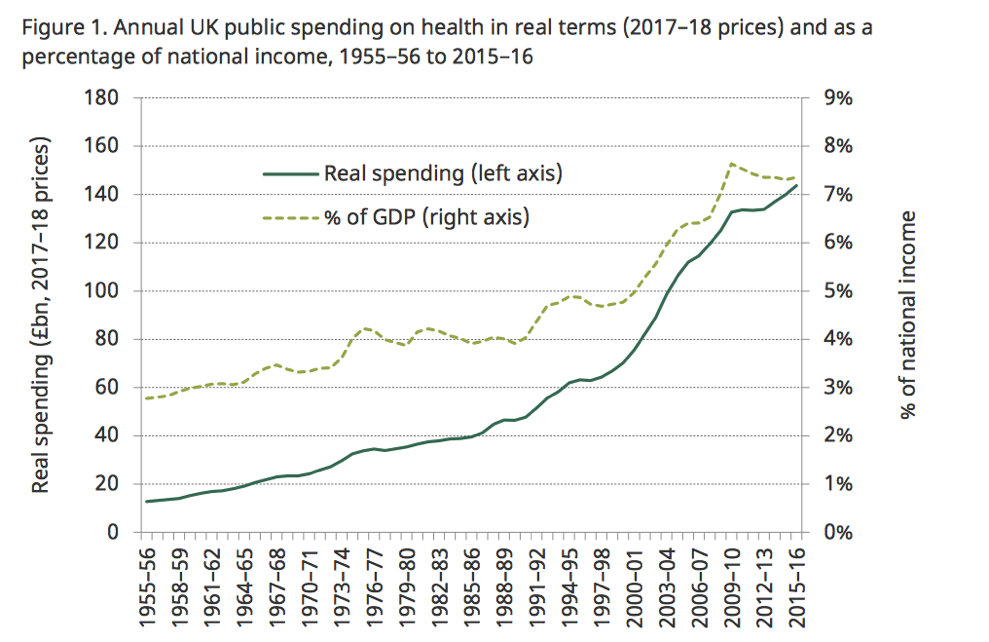 Step back to the early noughties: then PM Tony Blair commissioned former head of Natwest Bank, Derek Wanless, to review the function of the NHS and find ways of making it work better. In 2002, Wanless and his team published their first report: ‘Securing Our Future Health: Taking A Long-Term View’. The report reviewed the health of the NHS, rather than its patients, and looked at its future needs. The report majors on patient engagement in relation to their health with a view to this helping them to use the health service more appropriately.

Wanless was also a big supporter of decentralisation, stating “The current reorganisation of the NHS is pointed in the direction of decentralisation of delivery to local units. I am convinced that direction is right and that greater local freedom can improve the overall health service significantly.” Such an approach would effectively give people more control and responsibility for health care. But what’s happened in reality? Over the intervening years, more and more local services have been closed — in a bid to save money.

Forward to 2004 and Derek Wanless and his team published a second report: ‘Securing Good Health for the Whole Population’. Building on his 2002 report, Wanless once again promoted a more sustainable model in which people are encouraged to take more responsibility for their own health “Individuals are ultimately responsible for their own and their children’s health and it is the aggregate actions of individuals, which will ultimately be responsible for whether or not such an optimistic scenario as “fully engaged” unfolds. People need to be supported more actively to make better decisions about their own health and welfare because there are widespread, systematic failures that influence the decisions individuals currently make.”

Self-care isn’t an entirely dead duck in the NHS. It was highlighted again in the NHS Plan and in supporting people with longer-term conditions. So while the concept remains a ‘key’ building block for a patient-centred healthcare service, a notion to which the NHS is bound by its own constitution, it isn’t given anything like enough airtime. Some of this is down to variations in views about the concept’s meaning. The term ‘self management’ is increasingly used, and this is more about shared care between patients and the medical system in relation to the management of long-term conditions (including by using drugs). It’s less about staying healthy and avoiding being a burden on the NHS by blending an appropriate mix of healthy eating, healthy lifestyles, use of natural remedies and supplements, physical fitness, mind-body practice – and so on.

A more expansive definition of self-care (used at least up to 2011), that we consider more relevant, but has now fallen into disuse, goes like this: “the actions people take for themselves, their children and their families to stay fit and maintain good physical and mental health; meet social and psychological needs; prevent illness or accidents; care for minor ailments and long term conditions; and maintain health and wellbeing after an acute illness or discharge from hospital.”

The NHS’s Self Care Forum, that is responsible for a Self Care Week each year, now uses a simplified version of the definition, as follows: “The actions that individuals take for themselves, on behalf of and with others in order to develop, protect, maintain and improve their health, wellbeing or wellness.”

The Self Care Forum summarises its view on the continuum between self-care and 100% medical care in the following diagram: 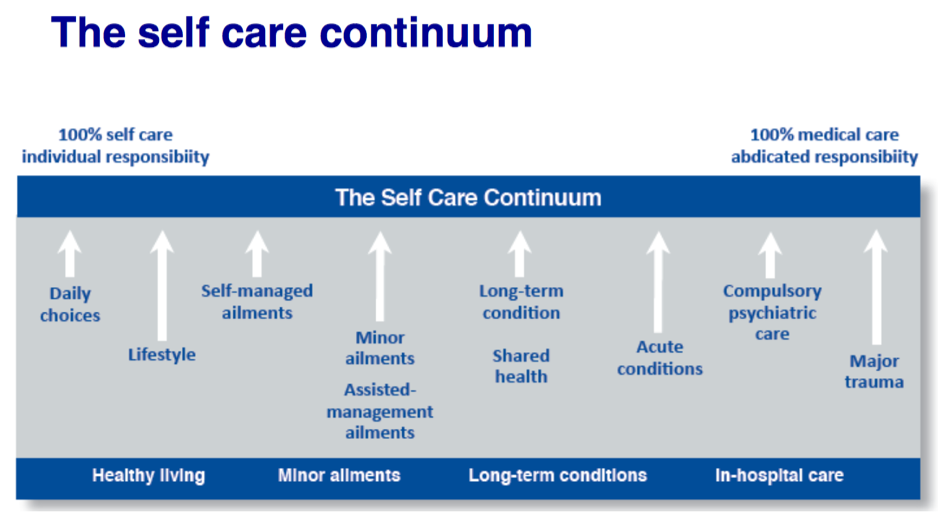 More than anything, true self-care that delivers high levels of health and vitality and prevents disease, isn’t working well for the majority. The NHS, and society at large, have together been spectacularly ineffective at getting large scale adoption of healthcare approaches that keep us healthy for most of our lives.

When the NHS was set up in 1948, its ambition was to bring good healthcare to everyone in the UK. Since then, there have been many changes in UK society: 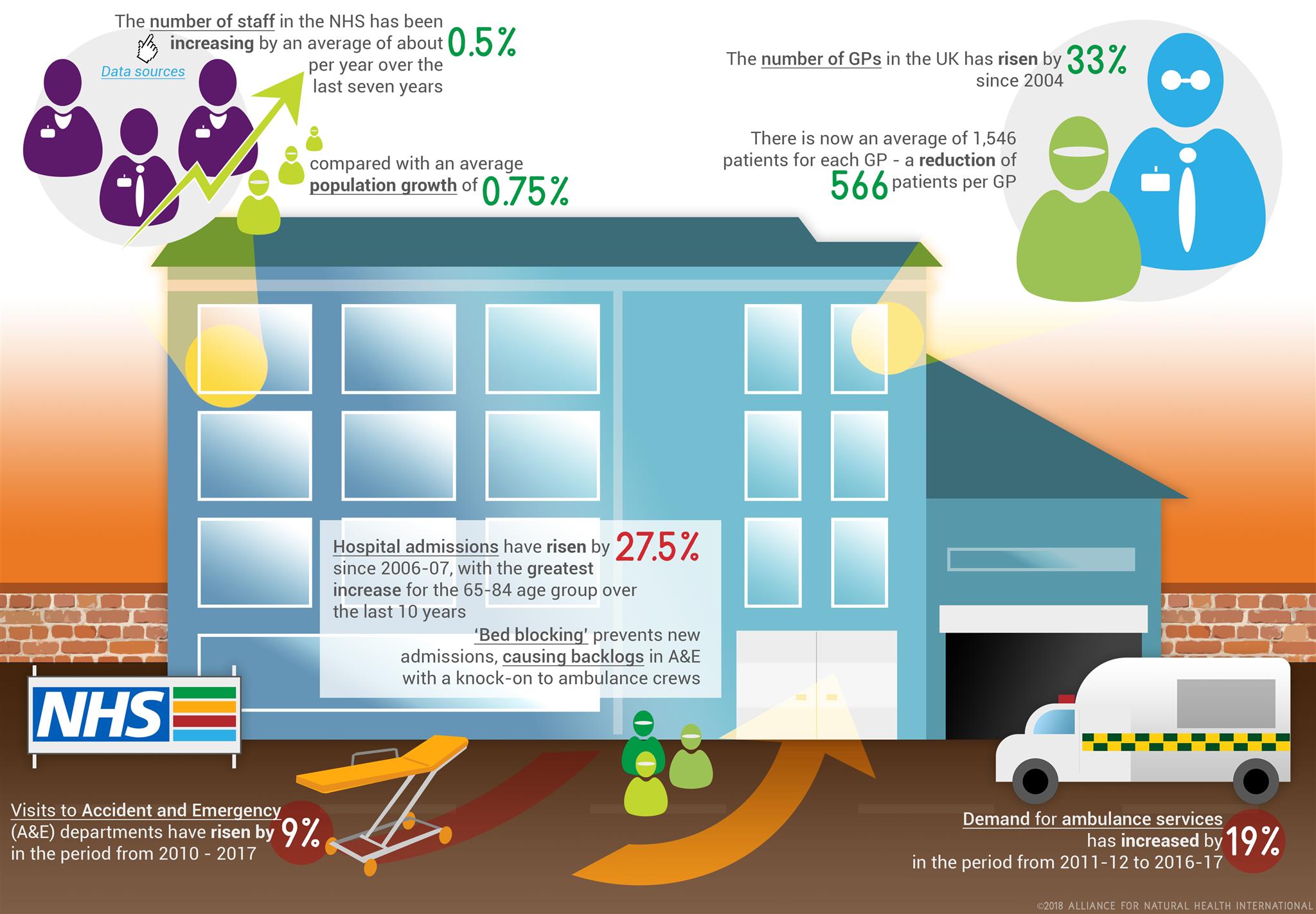 Too many people in the UK now rely on the NHS to deal with self-treatable conditions. The majority don’t practice self-care, believing their GP will resolve their health woes, these in turn relying far too heavily on false promises by the pharmaceutical industry.

ANH International has long advocated a framework of sustainable healthcare. This brings together the best of orthodox healthcare and natural health modalities that is personalised to the needs of the individual, along with improved and biocompatible self-care, earlier response to pre-clinical symptoms of disease, and improved disease prevention that includes lifestyle and nutrition based approaches.

The tide is beginning to change with younger doctors such as Dr Rangan Chatterjee and Dr Rupy Aujla recognising and embracing the concept of personalised medicine and promoting good health for all. These approaches are about treating the whole person rather than the disease. Interest in these approaches is growing across the world with pressure being brought to bear on healthcare authorities to re-evaluate their current models.

At the second Lifestyle Medicine Australasia annual conference late last year, our founder and executive and scientific director Rob Verkerk PhD, proposed an 8-point sustainable healthcare action plan. Next month, Rob will be delivering a keynote address on this subject at the Inaugural Integrative Medicine Conference organised by the Association of Integrative Medicine Malaysia in Kuala Lumpur, Malaysia.

We have to not just rely on healthcare authorities or governments to fix broken healthcare systems, like the NHS. We – the public – have a key role to play and by showing we are not the ones clogging up the waiting rooms of GP surgeries, and we’re not the major players on the operating theatre waiting lists, we are able to demonstrate the power of self-care done the proper way, especially the natural way. That’s also what the Hawthorn project is all about. We need evidence that what we’re doing is working – it’s not about evidence from randomised controlled trials – it’s about evidence from the real world.

Let’s keep working together and do what we can to take responsibility for our own health. Let’s achieve the highest level of health and resilience we can – and use the mainstream medical system only when there is no better alternative. Chances are, on the occasions when it’s necessary to use mainstream medicine, it will be more effective when delivered in an integrated fashion alongside other, natural, modalities.

That’s after all good, responsible and sustainable medicine – an approach that has never been more relevant, yet is still not supported or funded by the British tax payer.