Home News How does a society drugged up on statins clean up?

How does a society drugged up on statins clean up?

Why is it so hard to move from ‘wonder drug’ over-prescription to a science-based non-drug-based approach?

Those of us who run our health largely by natural means are still a small bunch by comparison with those who believe their local GP’s prescription will deliver their best health outcomes. Nearly 1 in 4 Americans over the age of 40 are on statins and the UK is pushing to get all men over 60, all women over 75 and a growing band of high risk over-30s on the drug. If that wasn’t enough, there’s a strong push to put thousands of children under the age of 10 on statins. And it’s not just heart disease that statins supposedly protect against, it’s cancer, multiple sclerosis and more. Such is the promise of statins, it's routinely referred to as the ‘wonder drug’ by media around the world.

Confused by the science? If you’re not, you should be! There’s a mass of research going on looking at benefits other than a reduced risk of heart attack or stroke. Take autoimmune diseases that are an ever-increasing problem. Some research suggests statins can have immune-modulating effects so might be helpful in the treatment of autoimmune diseases. In direct contrast, there are now at least 28 statin-induced autoimmune diseases that have been identified. One such disease is Statin-Associated Autoimmune Myopathy. As for statins, there’s good work showing that there’s more evidence that statins promote rather than protect against cancer.

Superimposed over these mixed messages from science and from health professionals is of course personal experience or the experiences of friends and relatives. As many as 20% or more of people taking statins suffer a plethora of side effects, from muscle pain, muscle weakness, headaches and dizziness to liver damage, cognitive impairment, nose bleeds, digestive problems, contrast induced nephropathy, cataracts, erectile dysfunction, venous thromboembolism, raised blood sugar, diabetes and, as mentioned above, autoimmune diseases. Depending on what their doctors tell their patients, or on how successfully doctors can convince their patients that the possible lower risk of a heart attack or stroke outweighs the side effects (or ‘intolerance’), people either carry on medicating themselves – or they stop.

The media, for which many people are still dependent on for health information, is another major influence in shaping the public’s opinions and it’s no surprise that the pharmaceutical industry has a massive influence on headlines and other content. As Big Pharma’s impact is so pervasive, it’s also unsurprising there have been many calls to curb its influence.

Take, the UK’s Telegraph newspaper as an example. It could be argued that on one hand this ‘broadsheet’ strives to take a balanced view of controversial issues and, on the other, it is widely read by more affluent socio-economic groups who are in turn more likely to opt for non-drug-based approaches to cardiometabolic disease prevention. Following is a grab from a search on ‘statins’ carried out earlier today (Fig 1). 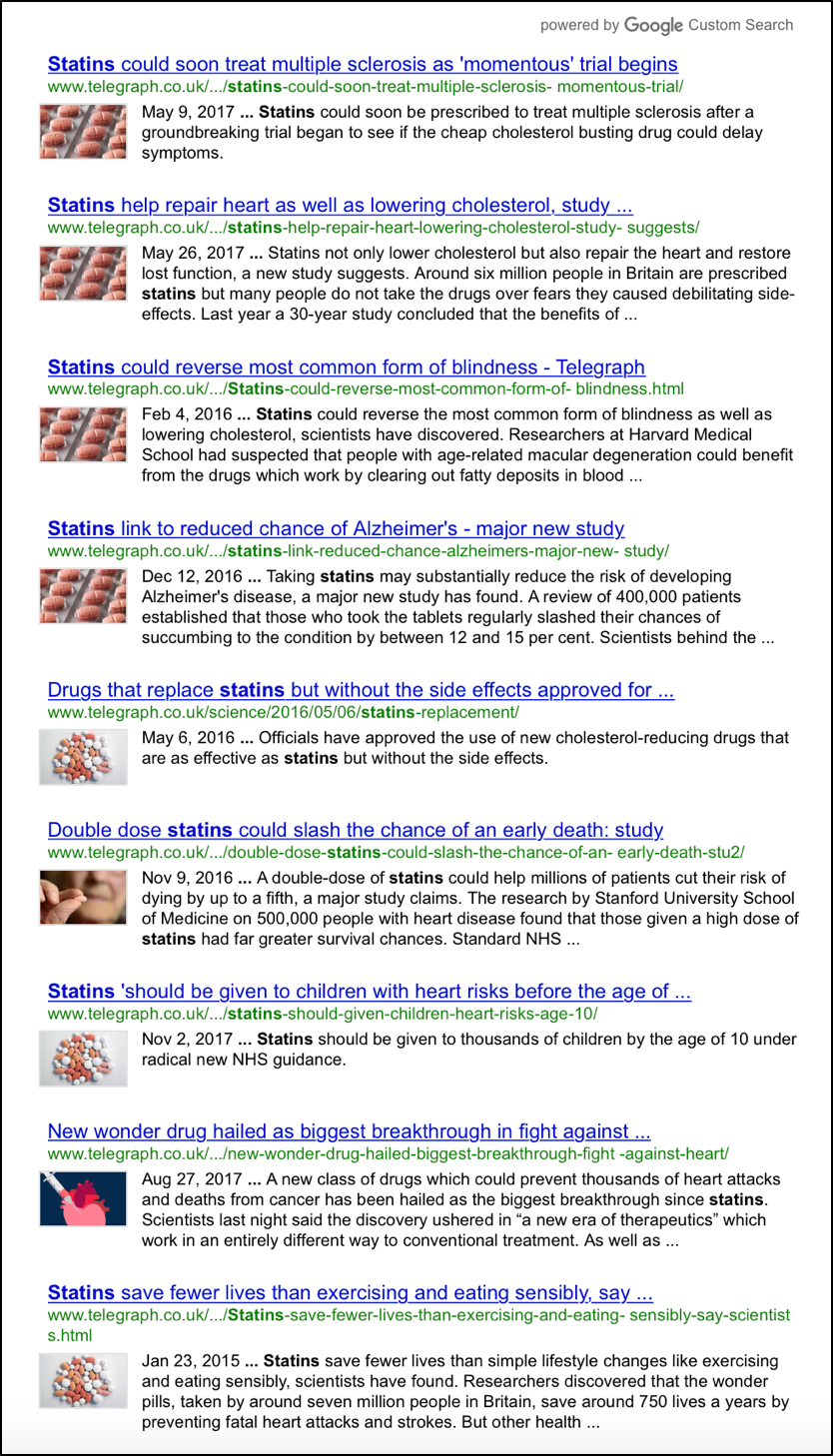 This is just the first of 10 pages of results. What’s more, you’d have to get to the ninth item – at the very bottom of this grab – to find a single piece of content that reveals something that will ‘speak’ to those more inclined towards a non-drug approach to heart disease risk reduction. The paper the article links to is a study published in 2015 in BMJ Open led by University of Liverpool epidemiologist, Prof Martin O’Flaherty.

Critically, the study finds that population wide measures involving improved diets and exercise deliver far greater benefits than statin therapy targeting high risk groups in terms of heart attack or stroke deaths prevented or postponed. But the models also reveal a perennial issue in research on dietary and lifestyle modifications versus drugs: those in higher socio-economic groups tend to benefit more than those in lower ones. For drug companies, especially in the UK, where approved drugs are dispensed freely or are subsidised by tax-payers, this is something of a nirvana: you get to sell in your product to the National Health Service (NHS) with the ‘feelgood factor’ that you are narrowing the disparity between social classes.

You have to dig deeper still to find a piece in which Dr Aseem Malhotra and others challenge the findings of a Lancet study in The Prescriber, and are quoted as saying: “Decades of misinformation on cholesterol and the gross exaggeration of statin benefits with downplaying of side effects has likely led to the overmedication of millions of people across the world. The lack of transparency in the prescription of statins is just one symptom of a broken system of healthcare where finance based medicine has trumped independent evidence and what is most important for patients.”

Deeper still, you’ll find the view of a British heart surgeon Dr Haroun Gajraj who ditched statins in 2014 after 8 years on them. His change of heart (pun intended) wasn’t because of side effects but rather because his cholesterol was lowered much more effectively by changing his diet and lifestyle than by taking statins.

If you focus on prevention…

Our view at ANH is that the main reason we have over-medicated populations with socio-economic disparities in personal responsibility for health, particularly in terms of prioritising non-drug-based approaches, is because we – as a society – have yet to give prevention enough public and community health focus.

A big obstacle is down to what happens at the primary care or GP level, although it’s interesting that large numbers of GPs already don’t prescribe statins as heavily as the relevant NICE guideline in the UK suggests. That’s important because the GP or family physician, as we’ve already alluded to, still remains in the eyes of many the most important source of information on matters of health.

An important paper just published in the journal Family Practice by a group of Swedish and Dutch researchers identifies key barriers to cardiometabolic disease prevention. We believe this provides exactly the right kind of framework that lets different groups in society tackle the multi-faceted issue from multiple vantage points. This is the only way to deal with heart disease and stroke prevention effectively – and that means by not relying on statins.

The authors identify a plethora of barriers to effective prevention in primary care, dividing the barriers into 5 different categories, namely structural, organisational, professional, patient-related and attitudinal: 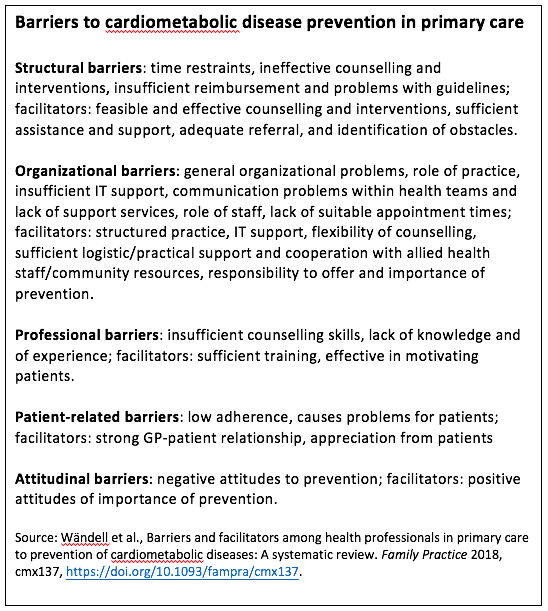 So where do we go from here? Here’s 5 things you can do: