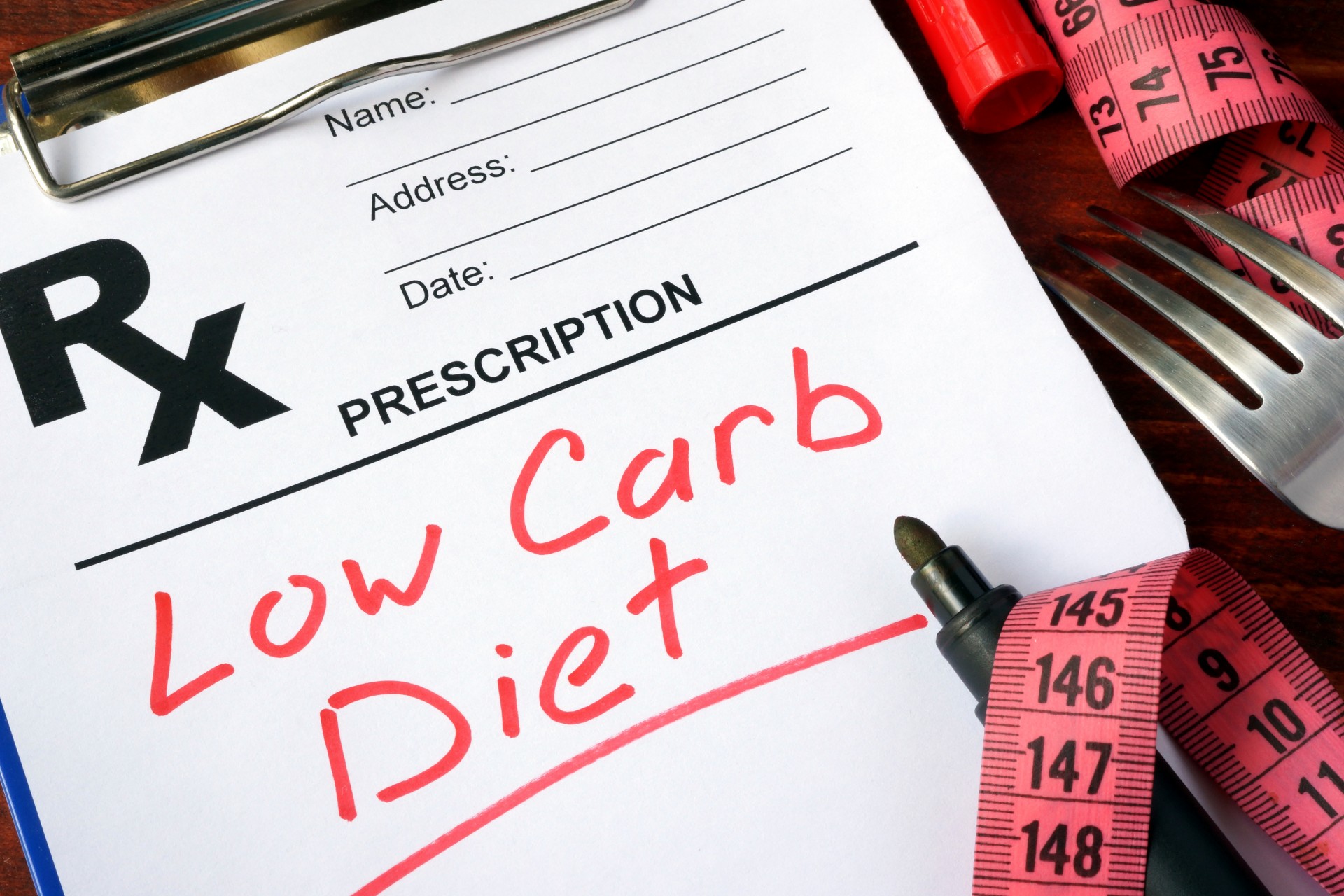 Is business not science getting in the way of unleashing a diabetes cure on the masses?

Type 2 diabetes, obesity and related diseases – including cancer – are breaking healthcare systems the world over. They are also contributing to huge losses in the quality of life for sufferers – as well as their families.

How far away are we from finding a solution?

For the majority of clinicians and patients, ‘anti-diabetic’ meds seem to be the answer. But they don’t fix the problem, they manage it. You go see your doctor regularly and get your HbA1c measured as a biomarker for your average blood glucose response. You may take your own blood glucose readings using a meter too so you can better understand your individual response to the foods you’re eating. All of this information then informs when and how you take your meds to keep yourself in the ‘normal’ blood glucose range for diabetics. For adults with type 2 diabetes in the UK, for example, that means 4 to 7mmol/l before meals (fasting) and less than 8.5mmol/l two hours after meals (post-prandial).

For those who are morbidly obese, there’s also the option of gastric bypass surgery. But neither are real fixes. Once a diabetic, most people, including an awful lot of doctors, are under the impression you’re always a diabetic. Even with gastric bypass, around one-third of those who’ve gone into remission from their diabetes can be expected to relapse after 5 years. 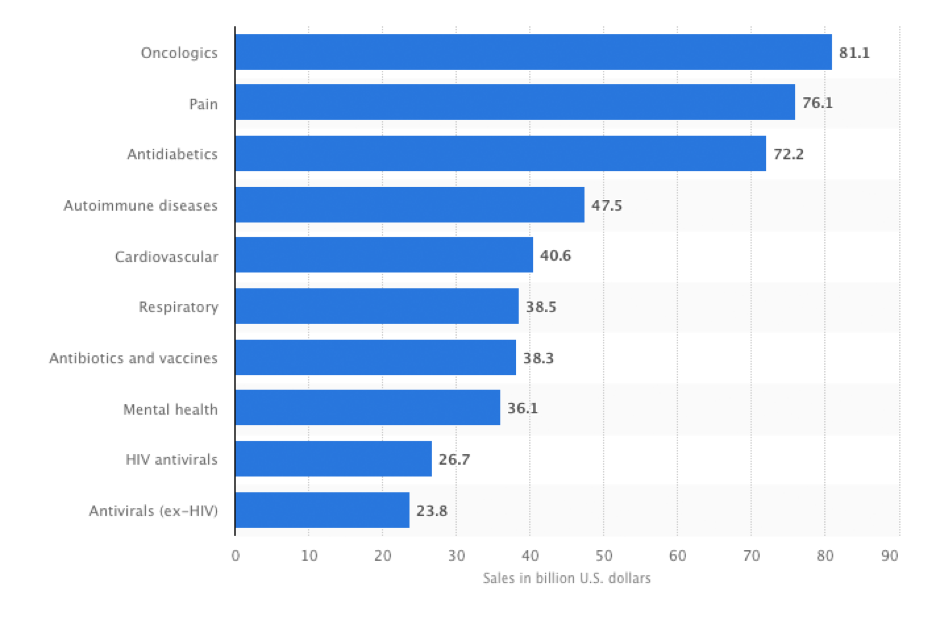 And the number of people affected is expected to continue to grow dramatically. While the proportion of the adult population with diabetes currently sits at 8.8% (~500 million people), it’s expected to rise to 9.9% by 2045. Given projected population growth, that represents a likely 660 million people who are fodder for drug salesmen. That leads to what academics have sometimes referred to as “irrational prescribing behaviour” for a given drug. In other walks of life, it might be thought of as misselling.

The long and short is that from Big Pharma’s perspective – that’s some gravy train!

In the UK alone, the National Health Service spends around £800 million on anti-diabetic drugs. And in case anyone thinks all the information about successful diet and lifestyle modifications reducing dependency on drugs has caused a downturn in prescriptions, think again. In the UK, NHS Digital has revealed prescriptions for the treatment of diabetes have increased by 80% over the last decade as compared with just 46% across all other areas of prescribing.

So imagine what happens if the most effective solution to this type 2 diabetes spiral was to not involve drugs at all….. 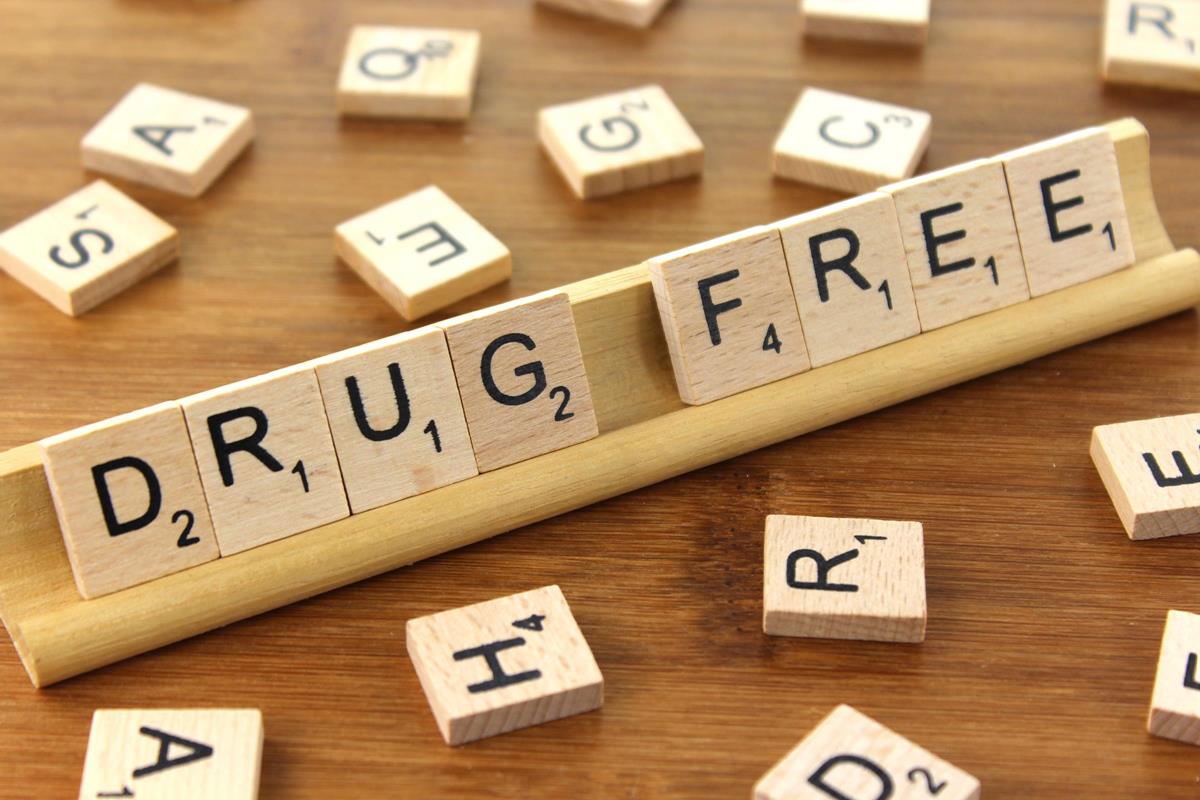 The fact is, though most people are not going to hear this from their family doctor who remains the primary sales portal for the pharmaceutical industry, type 2 diabetes can be put into remission in most people. Without drugs.

The evidence is already in. In terms of trials that the medical establishment are obliged to take note of, you’ve got the DiRECT, short for Diabetes Remission Clinical Trial in the UK. Data from the first year came in December 2017. It was published in one of the world’s leading medical journals, The Lancet.

The trial involves almost 300 people and it’s based around an intensive weight management programme involving severe calorie restriction. The study subjects are put on a crash shake diet (820kcal total diet replacement) provided by the Cambridge Weight Plan®, they take a fibre supplement and they are required to engage in physical activity for around 30 minutes each day. They then have food reintroduced in a stepped regime (a 400kcal meal every 2-3 weeks), they increase physical activity - all according to the Counterweight® Plus programme. Dietary guidelines are absolutely not ‘low carb’. They follow a rigid 50% energy from carbs, 35% from fats and 15% from protein – exactly according to government guidelines. There’s just less food (calories) than the average person eats, this being a nod to the notion that obesity and closely related conditions like diabetes are related to the highly simplistic (and patently incorrect) ‘calories in, calories out’ hypothesis. If subjects relapse (i.e. gain more than 2 kg and come out of the normal blood glucose range for non-diabetics), they are given a ‘relapse management’ protocol. This involves being offered Orlistat and a meal replacement, amongst other things. 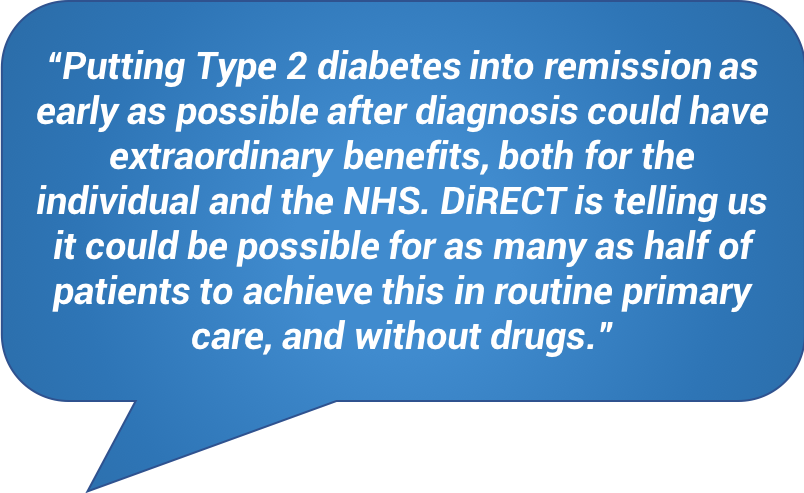 For many of us, the protocol used in DiRECT makes us wince. The reliance on total diet replacement shakes. The rigid adherence to diets with 50% of energy in the form of carbohydrates when it’s known that type 2 diabetes is a form of carbohydrate or glucose toxicity. The inclusion of Orlistat for relapsing subjects is nothing short of scary. The drug ‘works’ by reducing fat absorption that’s achieved by inhibiting gastric and pancreatic enzymes that break down triglycerides which would otherwise be converted to free fatty acids - so reducing energy. It’s a product of a continued belief in the ‘calorie in, calorie out’ paradigm, benefits are negligible for users and the side effects are horrendous going way beyond just oily stools. Add liver and kidney damage to the long list of side effects, for example.

Based on clinical experience from hundreds of doctors and practitioners who are routinely reversing, not just managing, type 2 diabetes using low carbohydrate diets, such as Dr David Unwin, the DiRECT protocols are a very long way from being either the most effective or the healthiest strategy for type 2 diabetics. It’s also not free from commercial interests; Cambridge Weight Plan and Counterweight – both funders of DiRECT – are clear beneficiaries.

But let’s not ignore some of the good things about DiRECT. It appears to work in achieving type 2 diabetes remission in around half the people using it, and, especially from the researchers’ perspective, it’s got straight forward protocols that can quite easily be managed. Like any attempt to reverse type 2 diabetes, the earlier you do something to reverse it, the better – before irreversible damage is caused to the pancreas (that produces insulin) and other organs and tissues.

The other approach to type 2 diabetes that’s been used much more widely in clinical practice – restricting carbohydrates – has now also reached a tipping point in terms of its provings that the medical mainstream cannot be allowed to ignore.

Check out the video below for Dr Sarah Hallberg’s explanation of the trial in the USA.

Using the remote – and therefore readily scalable – low carb approach used by Virta Health, after just 10 weeks, reversal of type 2 diabetes was found. After one year, 60% of subjects using the low carb dietary approach advised by Virta Health were disease-free and healthy. It’s no wonder it’s hailed as a “clinically-proven treatment for diabetes reversal”.

The trial is non-randomised, rather than being a ‘gold standard’ randomised trial. But that’s because as patients were recruited in Indiana, they were given the option to select whether they chose the Virta Treatment (‘treatment’ group) or continued with their usual meds (‘control’ group). That’s what trials for the real world are all about, rather than ones designed originally for drug licensing or laboratory animals!

The top line results showed that around half the patients reverse their type 2 diabetes in just 10 weeks and after one year around 60% were free from the disease.

Again – the approach has implications for commercial interests, in this case Virta Health.

Another approach is that being explored by Dr Valter Longo and his team at the Longevity Institute at the University of Southern California using the Fasting Mimicking Diet (FMD). The diet is low in calories and sugars (simple carbs), but high in unsaturated fats. It aims to mimic fasting and is claimed to reset dysreglated metabolism, trigger autophagy and rejuvenate the body by boosting stem cells. Preliminary results have been encouraging. At the heart of the program is – surprise, surprise – a product. It’s called Prolon®.

From what we’ve detailed so far, we would argue that the scientific battleground in the field of diabetes has a clear winner. It’s one form or another of drug-free therapy for type 2 diabetes. It’s also clear that, based on the legal obligation of informed consent, patients need to be told clearly that if they are have been diagnosed as diabetics and they have yet to sustain irreversible damage, there is a very good chance they can reverse their condition – without drugs.

This bring us to the second battlefield, the commercial one. Research needs to be funded, so it is commercial interests that drive research. When drug companies fund research, you end up with thousands of trials that justify their existence and you get healthcare systems dominated by drug (over)prescription.

In this second, commercial battlefield, you not only have the drug companies fighting the science – inevitably on a losing wicket – to retain use of drugs. You also have sub-battles between non-drug players, be they Cambridge Weight Plan, Counterweight, Virta Health or Prolon.

From a public health standpoint this is unfortunate. Because not everyone can afford these non-drug ‘treatments’, and others simply don’t want to consume foods and products that you can’t find in your local grocery.

Reversing or preventing type 2 diabetes isn’t rocket science. But the quickest route to it appears from the available science to be, unsurprisingly, by reducing foods that give rise to high blood sugar — and that means carbs, especially simple ones (i.e. sugars and refined, ultra-processed forms).

You can easily ‘do’ low carb and reset your metabolism by consuming good quality foods in the right combinations and amounts, while eating your food at the right times, often leaving big gaps between bouts of eating and cutting out all snacks (yes, intermittent fasting).

To make sure you’re not deficient in nutrients, you might also need to take some particular supplements, be they B vitamins for energy, vitamin D3 for endocrine (hormonal) regulation if you’re not getting enough sun, some Omega-3 fatty acids to counteract inflammation and a variety of concentrated phytonutrients to help regulate the multitude of pathways and processes in your body.

It is these generic, natural health approaches that we at ANH are so passionate about. We are a non-profit campaign, educational and research organisation working in your best interests, so we’re not tied to any commercial concerns. We passionately believe that you are entitled to make whatever commercial choices you wish. We simply offer our help and guidance through our Food4Health guidelines and other sources. The aim is to use natural health, not new-to-nature drugs, to improve metabolic flexibility and resilience. And it’s plenty feasible for the millions out there who’ve been diagnosed with type 2 diabetes and have been put on drugs.