Home News Is biohacking a product of a failing biomedical model?

Is biohacking a product of a failing biomedical model?

The shared mission of biohackers and the ANH-Intl sustainability blueprint

I had the privilege last weekend of meeting Tim Gray, a British biohacker who’s at the forefront of organising biohacking meet-ups and summits in the UK and beyond. We had found we had a lot in common, at both a personal level and in terms of our wider missions. The common theme is that our own work, that of the global biohacking community and the alternative/integrative/functional medicine community continues to grow in response to growing demand. That demand only exists because of failures in the mainstream, disease-centric offering. What was particularly interesting is to hear that the biohacking community is increasingly re-positioning itself as a ‘health optimisation’ movement, given the sometimes negative connotations associated with ‘hacking’.

The time is NOW!

When an unmet need emerges, our species’ ingenuity generally finds a way to satisfy that need. OK – we haven’t yet found a way of running our electricity grids carbon-free, stopping the devastation of the South-East Asian, West African or Amazonian rainforests or the pollution of our oceans. But an enormous amount of work is on-going that’s seeking to resolve these enormous challenges.

So what’s the driver behind the rapid expansion of the biohacker movement since around 2014?

Could it be something to do with the growing number of people who find they can dramatically improve how they feel, their level of productivity and their quality of life through low-cost ‘hacks’ of their own biology? Are millions of people today living with sub-optimal health, not realising they can ‘biohack’ themselves to a level of health and resilience that can’t be touched by anything their family doctor can offer?

The term ‘hacker’ doesn’t conjure up best impressions for many. It suggests something destructive, malicious and maybe even illegal. But actually in relation to biohacking – it’s all good, unless you are dependent on the current status quo of the medical establishment and pharma industry. In relation to biohacking, the verb ‘hacking’ refers to the positive connotation around computer software or hardware, implying the modification of “a computer program or electronic device in a skillful or clever way.” 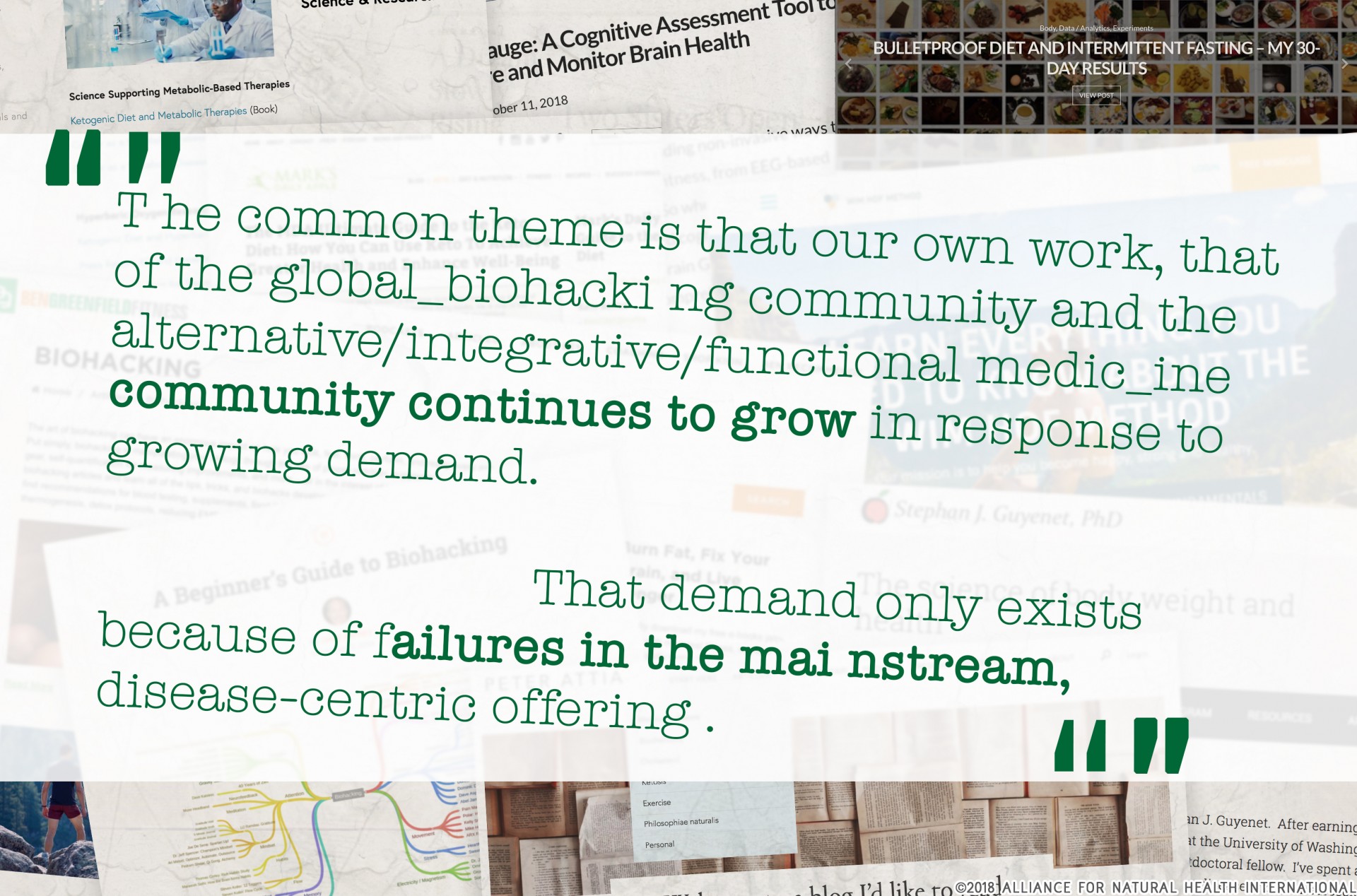 You’d imagine that’s what medicine’s all about. Sadly not, that’s why biohacking is largely non-pharmaceutical. It often relies on ‘quantifiable-self’ data derived from the increasing plethora of biofeedback devices and wearables hitting the market to inform the individual as to the most appropriate interventions (‘hacks’). These are selected to help optimise an individual’s health, improve peak performance and mental capacity, and reduce the degenerative effects of ageing or stress. Most hacks are essentially natural and low cost. They include modifications to diet (e.g. low carb, keto, gluten-free, zero added sugar, anti-inflammatory, low histamine, low oxalate, low FODMAP) and lifestyle (e.g. mindfulness, meditation, yoga, HIIT). They often include supplements, given the inadequacies of most people’s diets. If you’re a die-hard (literally) natural health advocate, does that all sound familiar?

If you want to join or find out more about the biohacking movement, or you’re simply interested in what hacks you might be able to readily employ to optimise your health, you can’t go far wrong in checking out what some of the leaders in the movement have to say.

Here are some examples and links:

Other biohackers worth following are:

Notice that all of the above names belong to men? That’s probably got something to do with the movements origins, with men dominating key technology roles in Silicon Valley, the ‘birthplace’ of the original biohackers who sought to optimise the interface of human biology and technology. But women have been biohacking for millennia. And therefore it’s good to see female biohackers emerge, like Dr Rhonda Patrick, Ellen Jorgen of GenSpace and Marta Taylor. There’s also more cyber-time being given over to female-specific biohacks, for example here and here.

Or Dave Asprey of Bulletproof fame:

What’s so inspiring is that central to our soon-to-be-published ‘blueprint for health system sustainability’, is the notion of empowered self-care. Biohacking or health optimisation, which is about self-informed, personalised self-care, is a part of this. It’s a key strand that we’re keen to bring into our planned demonstration trials.

More in due course.

If you represent an organisation, institute or other group involved in the health space and are interested in reading a pre-publication version of our UK-targeted blueprint with a view to endorsing it, please email Melissa Smith at [email protected] with subject ‘Blueprint endorsement interest’. We are expecting to release this pre-publication version next week. Thanks.