Type 2 Diabetes: the science of resistance

Today being World Diabetes Day we thought it important to draw attention to some of the underlying hormonal imbalances that underpin the spiral of type 2 diabetes. Obesity and its related diseases are one the biggest threats to human health in the modern age and it's facile to say those afflicted simply haven't heard the message to eat less and exercise more. Getting on top of the over-fat epidemic isn't about helping people to feel good or bad about their bodies; body positive or negative. It’s about health and longevity and ensuring that the fabric of society continues in a self-sufficient manner to support future generations. Humans are not built to carry excess fat beyond a certain level designed for energy storage and survival. When they do, there are severe health consequences to bear.

Listen to government and health authority advice and you’ll believe being overweight is all about excess calories and willpower (or the lack thereof!). Available evidence from obesity research disagrees. There is however wide consensus that the causes are myriad and complex and that obesity and its associated diseases are largely preventable. The good news from published and clinical evidence is that for those afflicted, type 2 diabetes can often be reversed altogether assuming collateral damage is not too severe.

Once upon a time, type 2 diabetes was a rare occurrence. Now it threatens to overwhelm health systems globally. In 2017 it’s estimated that 425 million adults globally, aged 20-79 years, were living with diabetes (type 1 and type 2). More shocking are estimates that by 2045 this is set to rise to 625 million. Of these, 90% of all cases of diabetes are type 2 – again, almost entirely preventable.

Speak to most conventional authorities and they’ll tell you the cause is too much sugar in the bloodstream causing insulin resistance. In reality, it’s far from being that simple.

Behind visible and internal symptoms created by metabolic disruption lie multiple, upstream, causative factors. Ranging from early and childhood trauma, too much stress, poor sleep, social (and nature) disconnection and exposure to too many environmental toxins, to the ultra-processed, sugar and refined vegetable fat-laden foods that are now ever-present. Designed to hit the 'bliss point', these calorie-dense, sugary, fatty foods speak to our primordial survival hormones, keeping us wanting more and pretending to comfort our unmet needs.

We still have a lot to learn about the hormones that regulate appetite and food intake. Insulin is the key hormone released from the pancreas that determines how much blood sugar will be allowed into cells where it can be used by mitochondria to produce energy. If the sugar is not burned, it's converted to fat. We know the consequences of becoming insulin resistant - our blood sugar starts going up and then it's all downhill towards type 2 diabetes. But insulin also has other effects, with insulin receptors being widely distributed throughout the central nervous system and insulin playing an important role, in particular in concert with glucagon (see below), to regulate blood sugar, as well as energy storage or use.

Our appetite hormones are responsible for telling the brain when to eat and when to stop. These hormones are so intimately involved with our evolutionary development that they can be regarded as primordial drivers. When correct signalling stops working as intended, the dysregulation can predispose you to gaining weight, becoming insulin resistant and heightening your risk of developing type 2 diabetes amongst many other chronic diseases. 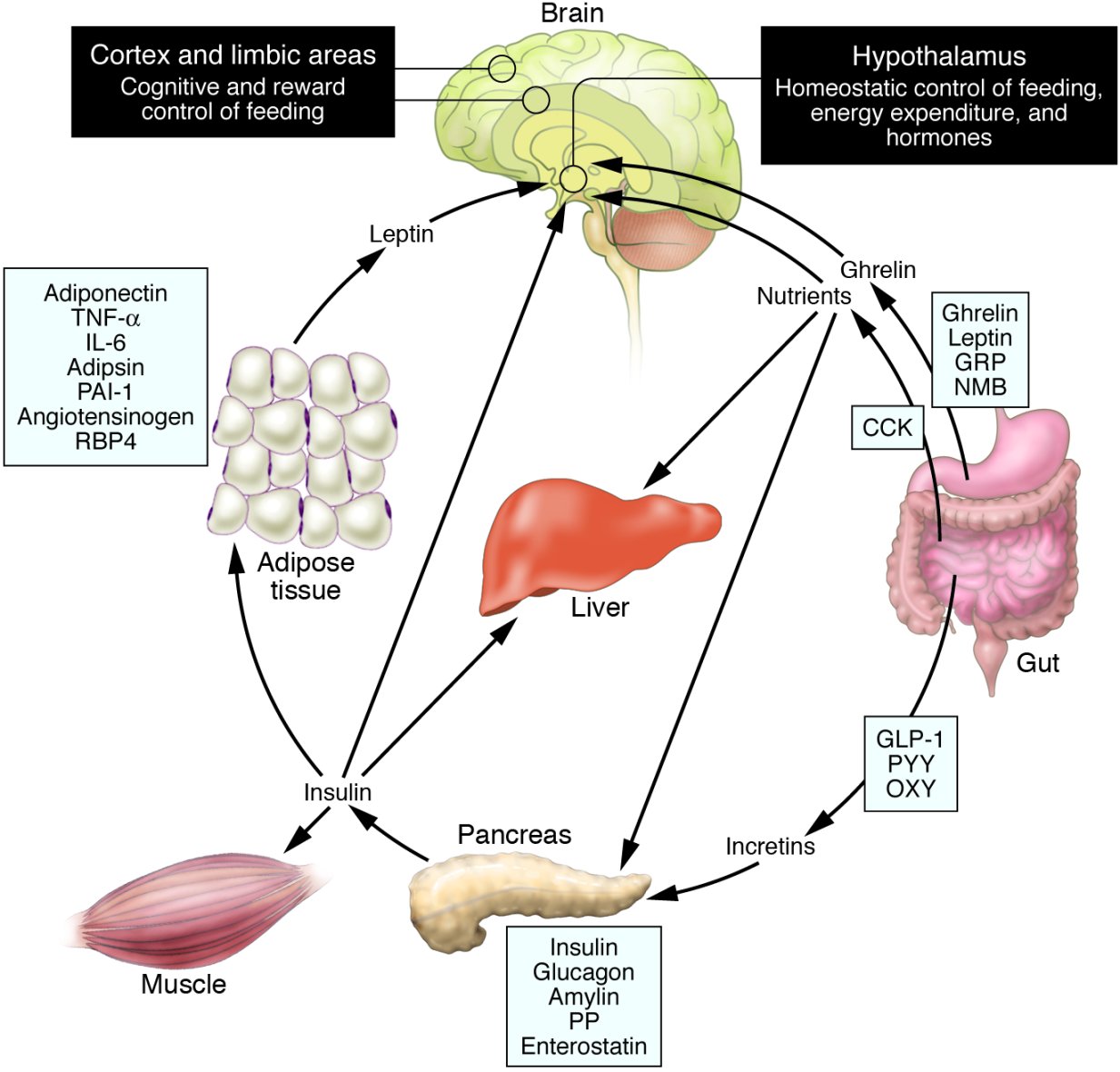 You would think the more fat cells a person has, the more leptin is produced and the less the desire to eat. But in the same way that insulin signalling becomes ‘muted’, the same is true of leptin - and the body becomes leptin resistant. Even with a hefty load of fuel on-board (as food or stored fat) , the brain doesn’t get a clear signal and in turn thinks the body is starving.

The body ignores this 'ample food on-board' message and the brain sends out messages to:

Hence the leptin resistant individual is unable to eat less and exercise more, despite the repeated calls from governments and health authorities that this is the way to solve the metabolic crisis facing us. In fact, the words ‘leptin’ or ‘hormone’ don’t appear even once in the UK’s new prevention plan which Rob Verkerk PhD pulls apart in his Founder’s Blog today. For the avoidance of doubt, eating more and exercising less is not the only root cause of weight gain, but it is a direct consequence of leptin resistance and disrupted hormones which are implicated in obesity and the development of type 2 diabetes.

The fix is not merely down to diet alone. The fix is about recognising that there are multiple upstream causes that have created a situation in which metabolic dysregulation has occurred. Whilst a diet closer to our evolutionary origins will certainly help, it won’t address the emotional/psychological wounds that may have contributed. Hence, any strategy for truly addressing our metabolic (obesity, type 2 diabetes, chronic disease) crisis must address the upstream causes that have caused the downstream effects. The causes, of the causes, of the causes, that are way upstream in the past. 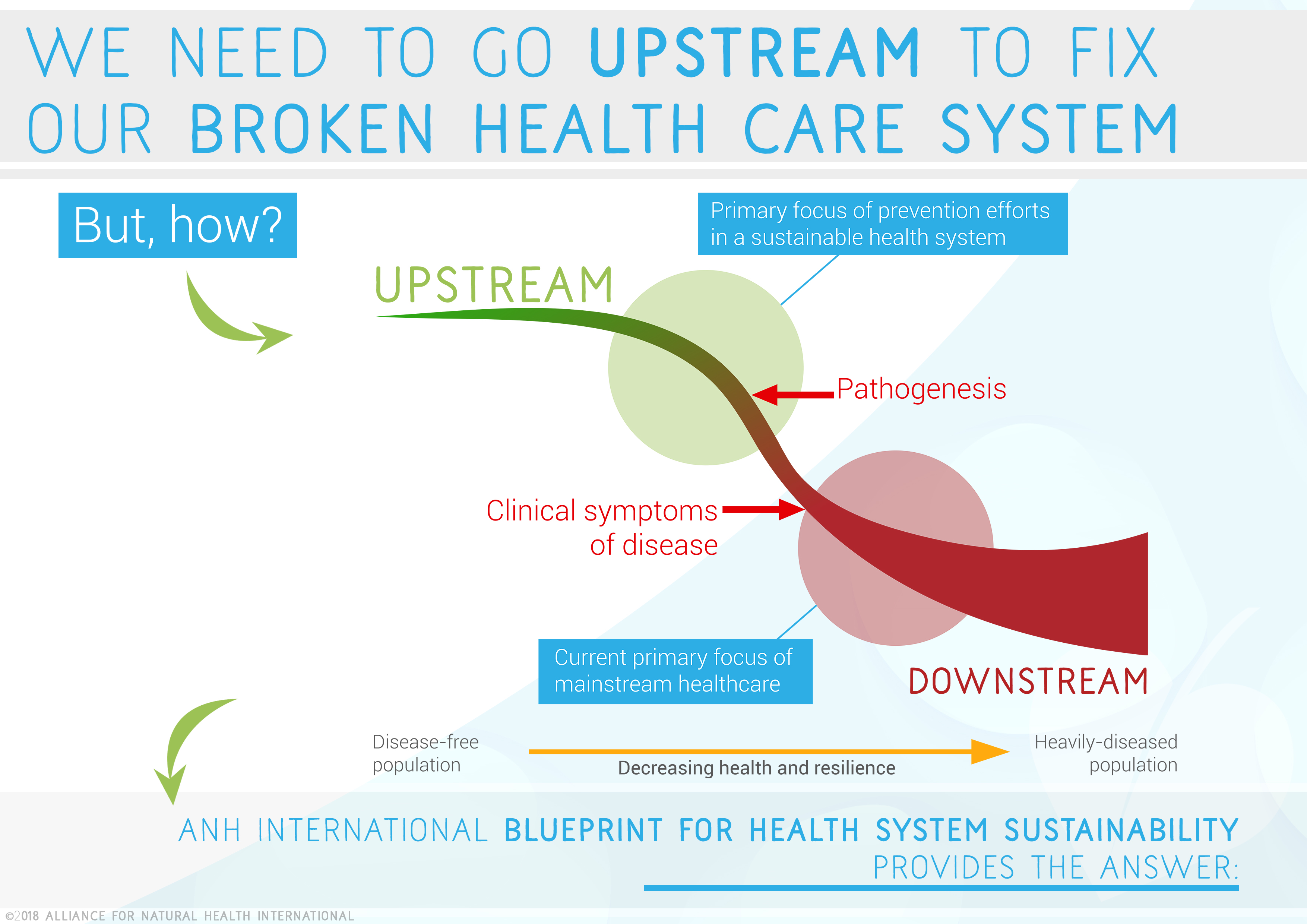 Source: ANH-Intl "A Blueprint for Health System Sustainability in the UK" (2018) [In press]

More information to get you started on your journey to leaving calorie counting behind forever: