Home News Be careful what and where you search 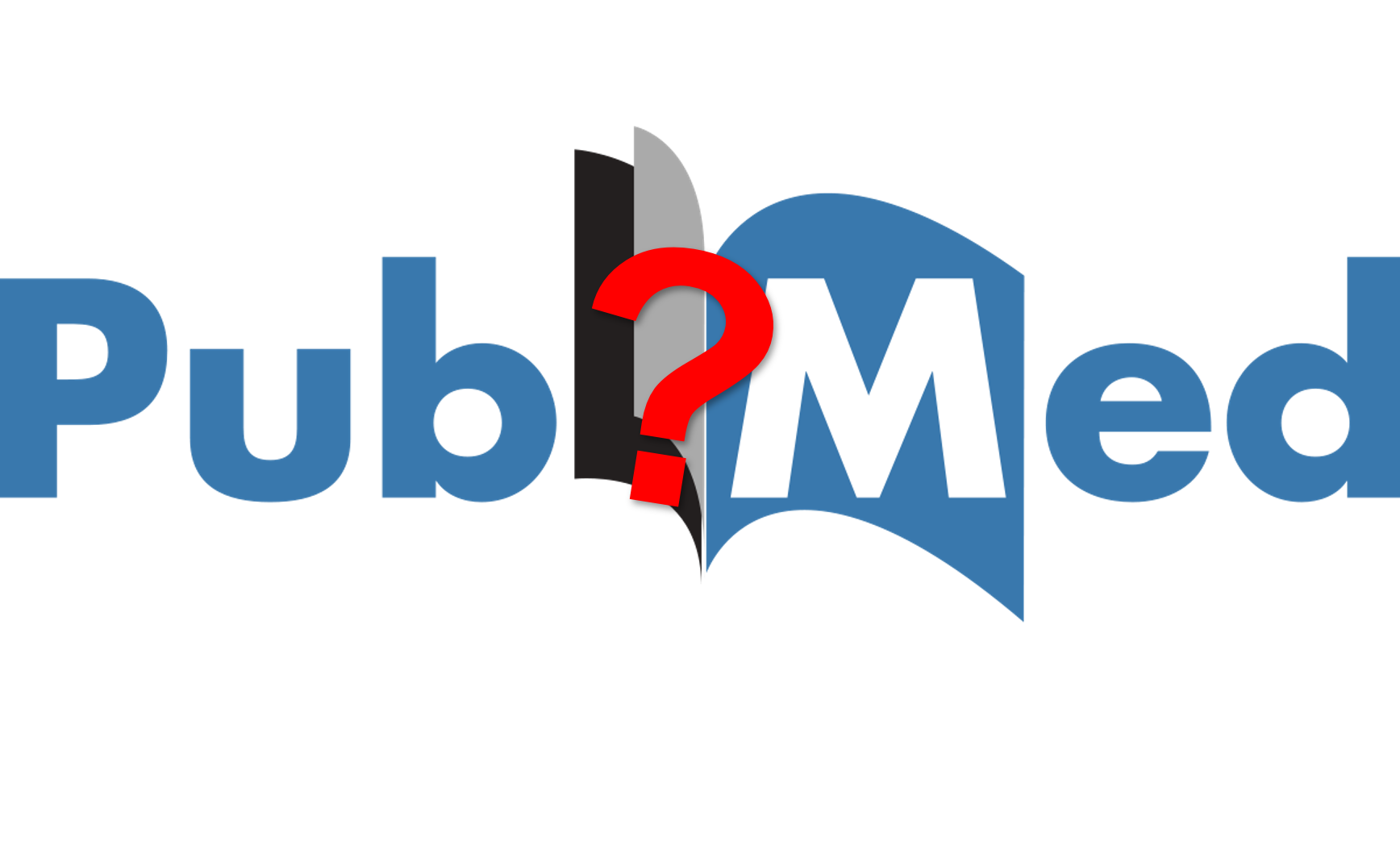 Be careful what and where you search

Could you be missing life-saving research in your scientific and medical searches?

Alessandro had multiple myeloma. He had to decide whether or not to proceed with a second bone marrow transplant. He looked up the research in PubMed and found 4 trials that should have been able to answer his questions, but the data he really needed and that he knew the researchers would have known, wasn’t published. Alessandro isn’t a hypothetical person. We’re referring here to Alessandro Liberati PhD, the Italian healthcare researcher and clinical epidemiologist who founded and directed the Italian Cochrane Centre. Sadly, Alessandro passed away in 2012. But you’ll find an interview with him published by the Bulletin of the World Health Organization in 2010. He was one of a growing band of accomplished researchers with grave concerns about biases in research that result in the public being excessively and often unnecessarily medicated. His concerns brought him together with other researchers with similar concerns, including Dr Peter Gøtzsche, a co-founder of the Cochrane Collaboration who went on to expose organised crime and malfeasance within the medical research community, particularly where Big Pharma funding was involved.

The price paid for such whistleblowing is typically marginalisation by the crony-led ‘mainstream’ pharma-funded medical research community, although Alessandro never lived to see the full consequences of what he started. 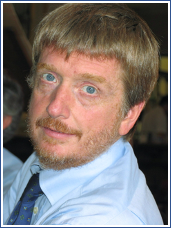 “Policy should be informed by evidence, not dictated by it: values and beliefs are an essential part of the decision making process. The key principle is transparency of decision-making” – associate professor Alessandro Liberati (2010) (now deceased), Medical School of the University of Modena and Reggio Emilia, Italy, and founder and director of the Italian Cochrane Centre.

Our own awakening about PubMed’s deficiencies

Alessandro Liberati, like Peter Gøtzsche, Peter Doshi, Tom Jefferson and others, including ourselves, have long been concerned about the concealment of research data that prevents independent analysis and therefore scientific interpretation. This means that clinical decisions and health policies are routinely made without full consideration of all relevant scientific data.

For most research scientists, the common starting point for evaluating the literature on biomedical issues is the online National Library of Medicine database, PubMed database, owned and operated by the US National Institutes for Health. The database claims to comprise “...more than 30 million citations for biomedical literature from MEDLINE, life science journals, and online books.”

PubMed is widely viewed as among the key databases used to conduct searches for relevant trials for inclusion in meta-analyses and systematic views. These kinds of studies are widely viewed as the pinnacle of the evidence-based medicine hierarchy and accordingly they are the most influential source of evidence in clinical decision-making.

But of course PubMed is used also by many others, including researchers, doctors, other clinicians, health policy makers, health journalists and even some citizens, including patients with serious diseases who are looking for answers and independent views of the science around their treatment options. Major public health decisions including those made by governments during this Covid-19 pandemic are based on science that is found in PubMed. It’s been the go-to engine for biomedical scientists for years – it is in many ways the Google of the biomedical world.

Unsurprisingly, independent non-profits engaged in the health space such as ourselves have also long been reliant on PubMed, and especially PubMed Central (PMC). But our view has been changing of late. Let me tell you why.

We’d been hearing about the imminent release of a new PubMed, something that was confirmed in a bulletin released by the US National Institutes for Health on 16 April. The incumbent version would become the legacy version on 18 May.

We also started to use the beta version of the new PubMed in early March. Four things immediately struck us during our research: 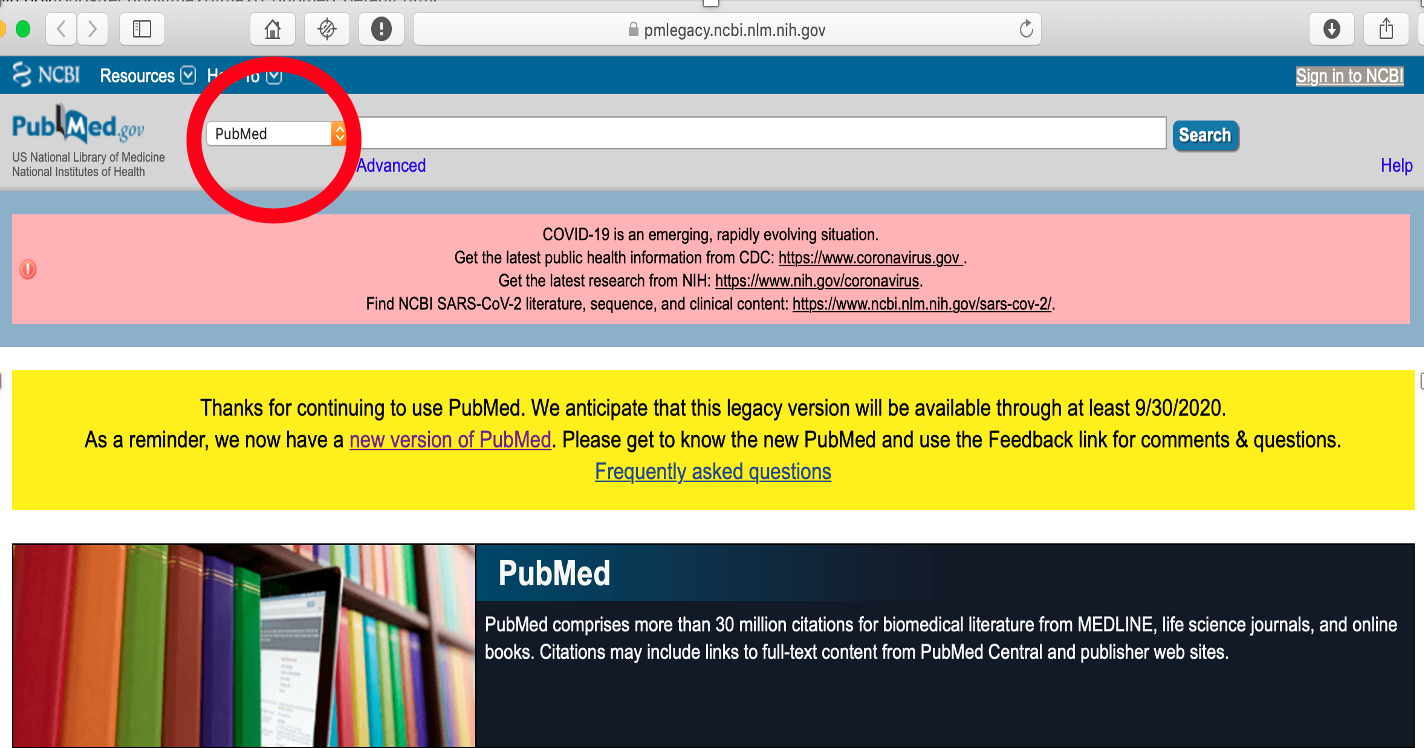 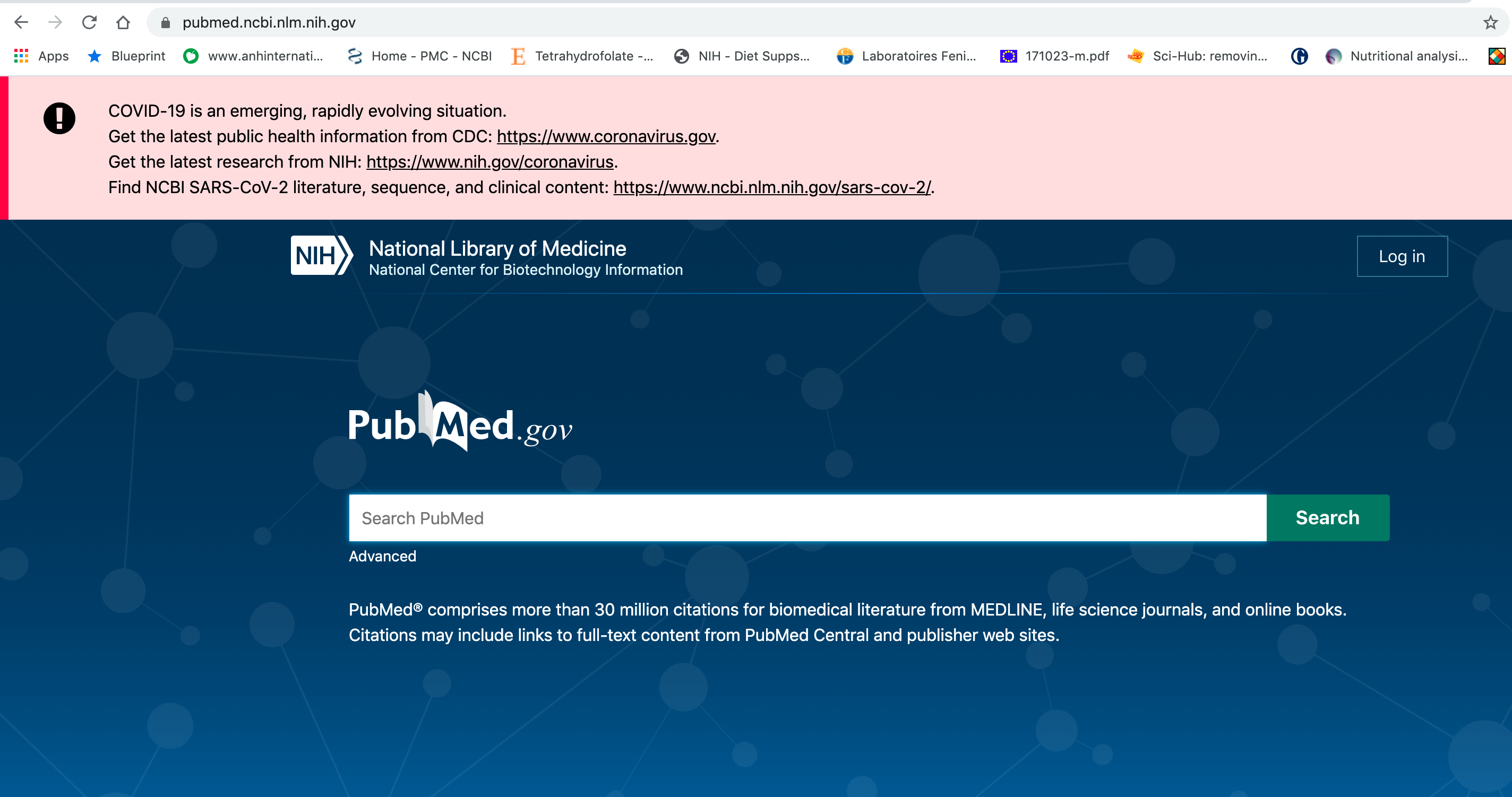 So what happens if your database search engine doesn’t effectively capture all of the data and literature that has been published? What happens if you’re a biomedical researcher or an advisor to a government on health policy and you only see a part of the available information, all the while thinking your database is capturing everything?

During our weekly trawls of data around Covid for our covidzone.org science tracker that started in early March, we have found PubMed to be relatively useless. This is especially the case when we were searching for interactions between SARS-CoV-2 or Covid and natural agents such as vitamins. It was also very apparent when we searched for published literature around scientific transparency, particularly as it relates to vaccines. This latter issue was particularly relevant given our launch of a vaccine transparency campaign in late April.

So we conducted our own in-house investigation comparing the 4 key biomedical databases we commonly use or have used, namely the PubMed Central (PMC), Europe PMC, the new PubMed and the legacy PubMed version, across 6 different areas: heart disease, vaccines, natural medicines, micronutrients, genetically modified organisms (GMOs) and Covid. The summary results are shown in Figures 1 to 6 for each of these areas, respectively.

Hypothetically, if all 4 databases generated exactly the same number of hits, say, because they contained exactly the same references and the search engines were equally efficient at finding them, each database would generate 25% of the total number of hits for all 4 databases. Depicted as a pie chart, the pie would be divided into four equal quarters. On this basis, we’ve presented our results as pie charts so the relative distribution of references can be easily seen. 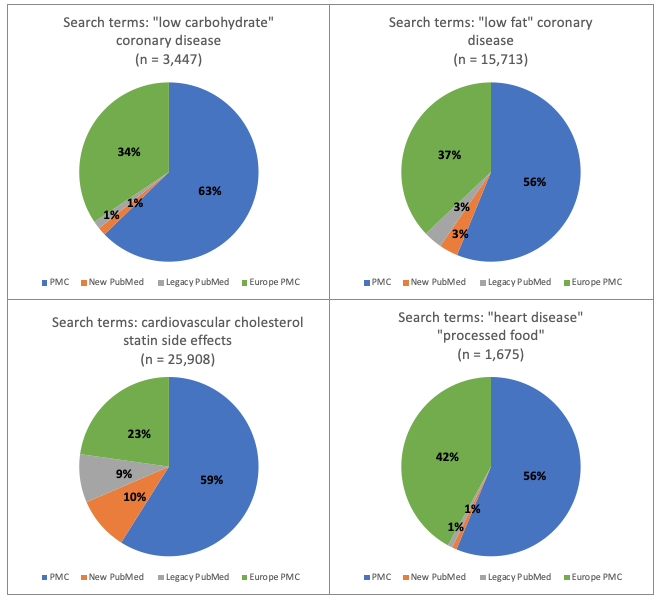 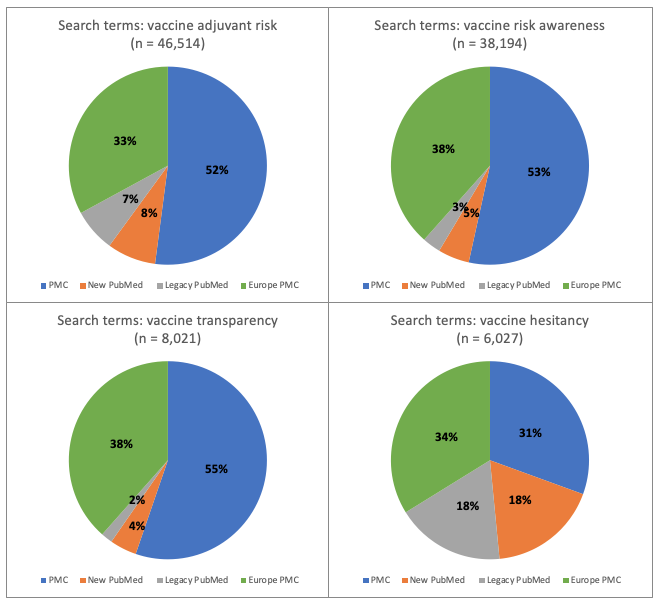 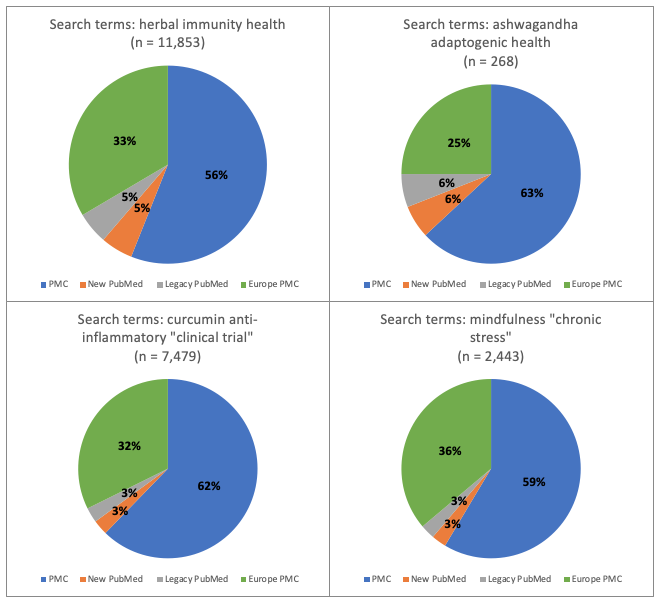 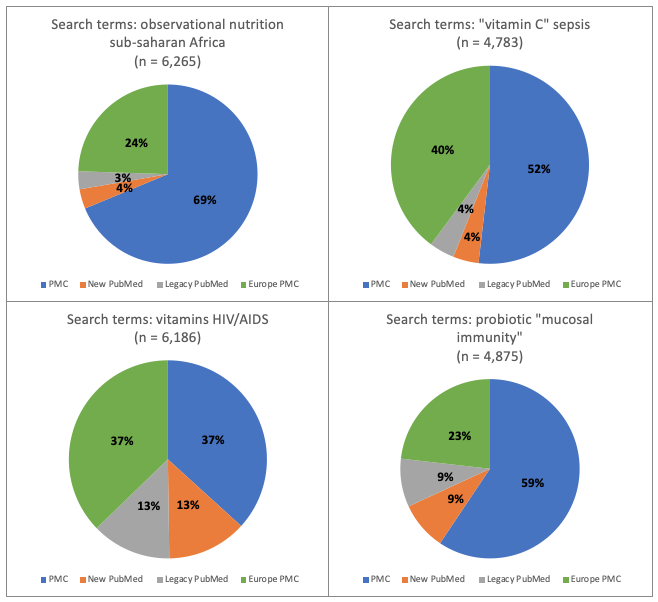 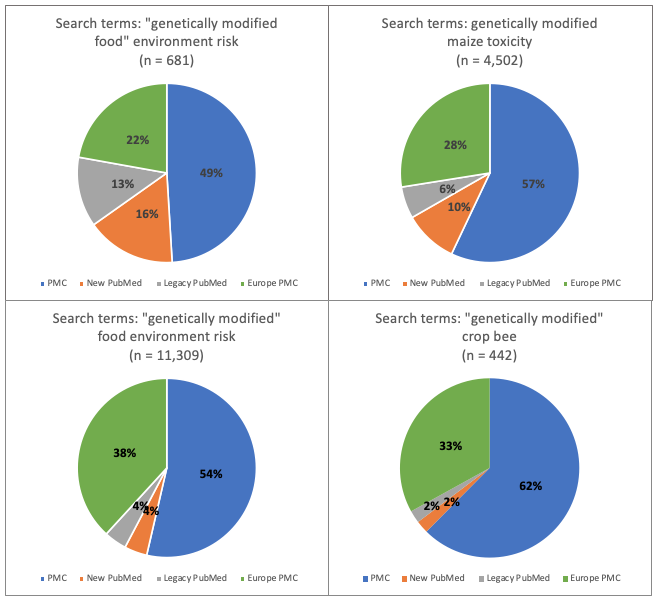 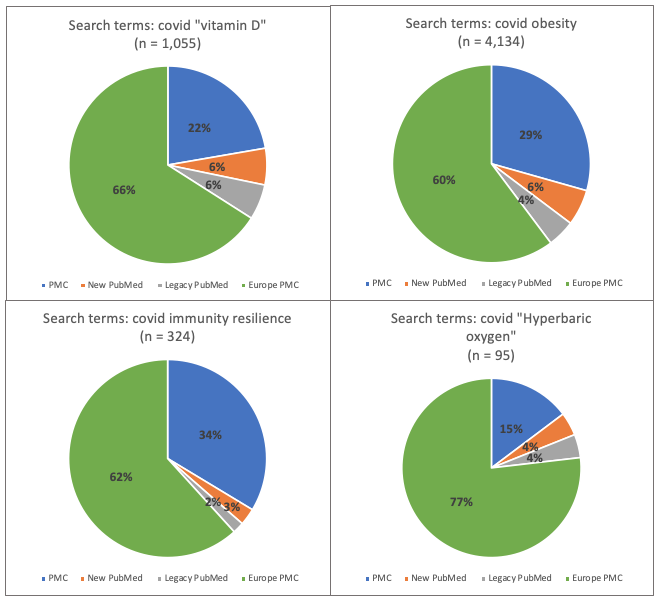 Our topline findings are as follows:

In order to understand better which references might be duplicated or missing between the 4 databases, we evaluated two different groups of search terms. The first (see summary results in Table 1) searched '"Jefferson T" transparency'. We chose this given that Tom Jefferson has been a major player in pushing for transparency of randomised trial data especially in relation to influenza and HPV vaccines. The second group of search terms (see summary results in Table 2) aimed to evaluate the science around what might be viewed as a more marginal (or controversial) area of covid science, namely the potential for using hyperbaric oxygen given that hypoxia (low blood oxygen levels) is common in patients seriously ill with Covid-19.

Frankly we were shocked by the inconsistency of results across the databases. We were able to draw the following conclusions:

Bottom line: if you use PubMed alone - you'll be blind to the science, at least in the areas we searched that are of particular interest to us and our supporters.

While many of us have glibly talked about searching PubMed for literature on all aspects of the biomedical sciences, we must now be aware that you should do this at your peril if you are genuinely interested in searching out all available peer reviewed literature. This might be especially the case when you carry out searches in areas that are viewed as marginal or a threat to mainstream interests.

We don't know where the funding came from to revise PubMed. But the removal of the dropdown menu is a disaster as it doesn't prompt the user to test hit rates using different databases. The funding for PubMed Central is, however, declared and we noted that at the top of the list of private and international partners is the omnipresent Bill and Melinda Gates Foundation. We simply don't know if this Foundation or any other interests were involved in the redevelopment of PubMed or the way in which PubMed is found by the internet search engines like Google. But given the recent revelations of Dr Philippe Douste-Blazy, a cardiologist and former French Health Minister, in an interview on French television who described disclosures made at a recent secret Chatham House rules meeting of experts. He upheld that the editor of The Lancet, Richard Horton, said that his journal and the New England Journal of Medicine were forced to publish a negative study on hydroxychloroquine following pressure put on them by the all-powerful pharmaceutical industry. He described the erosion of science as "criminal".

The process of now undertaking searches of PMC or Europe PMC - that we might have loosely referred to as a PubMed search (given PMC = PubMed Central) is now a convoluted process involving positively searching out PMC, rather the accessing it via the dropdown in the old (now legacy version).

Many people using the search engine may not have noticed what appears to be a sleight of hand. The National Center for Biotechnology Information (NCBI) will undoubtedly argue that it made it abundantly clear what was happening in its 16 April bulletin.

Whatever the reasons, we've demonstrated that PubMed is next to useless as a database and resource for the kind of subject areas central to our mission and vision.

We're not aware of any other individual or organisation that's sounded this warning. So please, share this widely, especially among doctors, clinicians or practitioners who may still be likely to use PubMed as their key data source.

Please share this article widely. We are currently facing serious censorship from social media platforms so our ability to communicate is heavily dependent on what you, the reader, decides to do, or not do, after reading the article. As an independent non-profit focused on natural and sustainable health, our survival as an organisation is entirely dependent on donations. We greatly welcome donations, however big or small, via our secure online portal. Ethical companies involved in the natural sector can join our Vanguard Club and derive unique benefits. Thank you.

>>> Back to Alliance for Natural Health Intl homepage