Home News Can natural medicine come to the rescue of antibiotics? 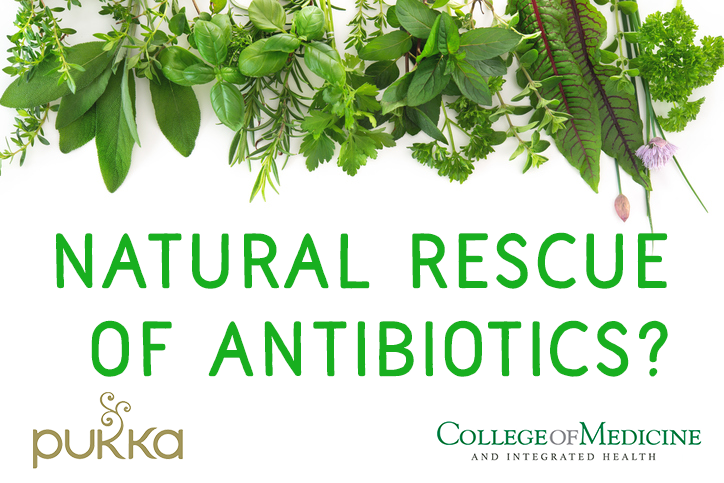 Can natural medicine come to the rescue of antibiotics?

Antimicrobial resistance (AMR) is developing so quickly you may soon find all available antibiotics won’t be able to protect you from what was, until recently, a treatable, but potentially lethal, staph or MRSA infection. In fact, it’s estimated that by 2050, AMR will be responsible for the loss of at least 10 million people a year.

Is the solution to try to out-smart nature and hunt for newer and different forms of antibiotics? Or is it to reconsider how we use existing antibiotics, and try to reduce the ‘selection pressure’ for resistance genes in disease-causing bacteria?

Given the former is extremely unlikely, with suggestions the antibiotics market is “falling apart”, it seems we have very little choice other than to look at better ways of preserving antibiotics for occasions when there are literally no alternative options.

This piece is all about an important initiative kicked off last week in the UK jointly by a herbal company, Pukka Herbs, and the College of Medicine. It’s about developing an initiative that both stops doctors from prescribing antibiotics unnecessarily and educates them about feasible, non-pharmaceutical alternatives. At least as importantly, it’s also about stopping members of the public from demanding antibiotics from their time-pressured doctors.

Passionate about finding health solutions that protects people, plants and the planet, Pukka Herbs and the College of Medicine seized the nettle on Thursday 3rd October when it facilitated a forum for health care leaders exploring the feasibility of new self-care approaches to reduce the call on antibiotic prescriptions. Rob Verkerk PhD and Meleni Aldridge from ANH-Intl were delighted to be invited to join the meeting with around 50 other experts, doctors, health practitioners and influencers, to participate in this much-needed initiative.

Chaired by Professor Michael Depledge CBE, from the European Centre for Environment and Human Health at the University of Exeter Medical School, it seemed highly appropriate that the event was held at the Chelsea Physic Garden in London.

Chair of the College of Medicine, GP and former head of the NHS Alliance, Dr Michael Dixon OBE, kicked off with a worrying statistic. He said if you take an antibiotic, the chance of it working 3 months later is vastly reduced. But as importantly, he added that your belief in your need for it can also change the way your immune system responds to infection in the future.

Dr Dixon described our over-reliance and inappropriate use of antibiotics as a “malignant conditioned effect”. He then explained how NHS GPs are put under extreme pressure by patients demanding antibiotics for very minor conditions. “They think they can’t heal without it”, said Dr Dixon. It puts the doctor/patient relationship under enormous strain causing unnecessary friction when the quality of the therapeutic relationship is so important in the long run. To keep things on an even keel, many doctors simply give in and write the script. Time is also a factor as the constricted 10-minute consultation window simply doesn’t allow enough time to get into lengthy explanations of why antibiotics either won’t work for the condition or will cause more harm than good.

Added to that, in the UK, like in all litigious countries, we’re facing a situation where the doctor has become fearful of being sued or reported to the licensing body (the GMC in the UK’s case) for not prescribing antibiotics for infections that may have serious consequences. Absurdly, the doctor risks becoming the public enemy for not prescribing antibiotics. As such, Dr Dixon said many doctors take the path of least resistance and simply dish out the antibiotics. This coupled with the desire to not send people home empty handed, means that doctors need something else to offer. He called for a change to the culture of norms and a need for more public health campaigns that aren’t necessarily rooted in pharma-style scientific evidence. It was important, argued Dr Dixon, that they are rooted in appropriate evidence of clinical effect and safety, being focused more on health creation and the development of immune resilience. Such thinking opens the door to targeted and personalised nutrition, herbal and lifestyle approaches.

Many of our readers will already know that antibiotics are utterly useless against viruses. So if you have a viral infection, antibiotics will actually cause you more harm than good given the damage to your gut microbiome that’s so instrumental to your immunity and resilience. In light of this, a GP from Crawley, Dr Amit Bhargava, cited survey data that showed the public strongly believed that flu, bronchitis, colds, sore throats and urinary tract infections needed antibiotics if healing was to occur. The same survey revealed that over half of the respondents (52%) believed antibiotics kill viruses, while, ironically, 89% recognised antibiotics were not good for them and 64% thought they caused unpleasant side effects.

In their desire to give something, even if they know it’s not the answer, NHS GPs appear to prescribe more antibiotics to people from lower socioeconomic backgrounds and there is a 23% increase in antibiotic prescriptions on Fridays!

There was much discussion around evidence given the antipathy conventional medicine has historically rained upon natural medicine and its advocates. Signalling a sea change in view, Dr Dixon reported that recent discussions on self-care with the Royal College of General Practitioners (RCGP) had yielded agreement that only the best evidence base is needed for things that the patients choose to do themselves. It was agreed that natural remedies should not be subject to randomised controlled trials (RCTs) like drugs. Could it be that the danger posed by antimicrobial resistance is the catalyst we need to unite diverse health interests in search of a common goal?

It was clear from Southampton University PhD student Martin Logue’s presentation on his doctoral research, ‘Andrographis for respiratory infections’, that we have some way to go still. His research involved interviews with doctors and revealed that there are still doctors entrenched in the belief that if there’s no empirical evidence for something natural, then any action is just placebo. Others acknowledged that there are vested interests that don’t want people to learn about herbal and natural medicine. Some even took the view that they were fine if the patient made the choice to use natural remedies themselves, but many also said that natural medicine is a form of non-medicine and they didn’t want to engage with as they had no knowledge about it.

Medical herbalist and Pukka’s herbal director, Euan MacLennan, called for a common sense approach to evidence for the products that patients use to self manage common ailments. His view, after working in the NHS as a medical herbalist for 8-years, is that it’s more about what’s practical and manageable for each person, and then supporting patients to make the right choices and following-up on their progress.

Euan, along with most of the afternoon’s speakers, acknowledged that antibiotics have significant effects on the microbiome and that repeated use strips away the protective arsenal that the body would normally mount to combat infections.

Some of the heroes of the day included thyme, andrographis, myrrh, medicinal mushrooms, turmeric and other polyphenol-rich botanicals (cloves, cocoa, berries and red wine) because they are easy to obtain, very inexpensive and have a long history of effective use. Less commonly considered is access to green spaces, where research shows that it could save the NHS £2.1bn annually.

However, the central pillar of this shift away from antibiotic use is patient empowerment and education so that the confidence is there to change behaviour. Community health being of extreme importance to allow people to understand that the GP is not the only place to go to for health. Pukka, rightly taking its corporate responsibilities incredibly seriously, is heavily engaged in community outreach to help people make the appropriate choices for their health.

Euan MacLennan also shared findings of a recent study that showed that our sustained and inappropriate overuse of antibiotics has caused nearly 90% of wild bottlenose dolphins in Florida to have resistance to at least one common antibiotic. He implored that, “We can’t get away from the fact that antibiotics are having a profound effect on our ecosystem. We have a responsibility to our environment. We can really make change.”

Dr Elizabeth Opara from Kingston University revealed that colonisation of our microbiome occurs in utero. Contrary to widely held beliefs, we are not born sterile. She explained that bacteria are now known to occur in amniotic fluid, meconium and the umbilical cord. Given the pivotal role that the microbiome plays in the development of our immune system and how just one course of antibiotics alters that environment permanently. Surely that's enough reason why their use should be reserved for serious life-altering infections?

A professor of infectious diseases from Public Health England (PHE) shared from the floor that AMR bacteria in factory farmed animals do get into people via the food chain. He said that PHE is really up against the tide of public attitude on antibiotics and how to educate on why antibiotics aren’t the answer is still an unsolved problem. He welcomed the event and called for ideas for how to bring about this change in attitude.

It’s a unique opportunity and one that the organisers and health care experts in attendance are taking full advantage of in the form of a collaborative report to PHE on the evidence base for a selection of non-pharmaceutical natural approaches to reducing antibiotic prescription.

Many conferences end up being a talking shop for people of like-mind, talking to others of like mind. This was not one of those events. The guests were carefully selected for their expertise and influence and included conventional doctors, integrative medicine professionals, herbalists, journalists, academics and representatives from PHE. Expect to see change from this initiative because the UK government recognises it needs help (Ed. You could say that again!) and the door is wide open - probably for the first time in recent history.

Michael Dixon shared that in the early days of becoming a doctor, his patients used to commonly use their own natural home remedies. But over time, such use has decreased, no doubt from ongoing pressures and campaigns by the protectionist pharma lobby and its beneficiaries in the mainstream media. He also noted that in other parts of Europe, the tradition remains more intact, including in Germany and Eastern Europe. The same kind of natural care traditions need to return to the UK, said Dr Dixon.

If you’re interested in botanicals for self-care, instead of going to Dr Google for your first opinion, or even Dr Yahoo for the second, you might like to visit the College of Medicine’s social prescribing and self care website at www.ourhealth.directory and visit the link to the self-care tool kit.